Creative’s Xtreme Audio Notebook is a reworked version of the audio company’s entry-level Xtreme Audio PCI card, only for notebooks, as its name suggests. The card is the first product from Creative to make use of the Express card slot form factor, so only works with newer notebooks; it won’t fit into a PC Card slot. 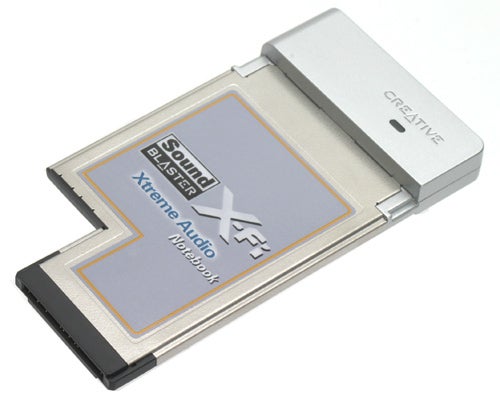 Like the Xtreme Audio, it doesn’t actually contain a physical hardware X-Fi processor chip, despite the product name. What you get instead is a basic audio converter based on an improved Audigy 4 model. Creative’s website make no bones about that fact that this is not card for gamers, although under ALchemy, it is possible. All the effects and processing is done in software, the assumption being that any laptop with an ExpressCard slot is going to have a CPU capable of soaking up the host-based effects processing.


There’s a minijack connection that combines optical in, microphone and line, and also a headphone/optical out. The optional small break-out box offers up to 7.1 via the standard mini-jack connectors. This breakout unit is an essential requirement if you intend to use the card for any home theatre purposes so is a cost that will have to be factored in to the overall purchase, unlike the Audigy notebook, which came with a multi-connector cable. Currently the box only seems available from Creative’s website and runs to a total of £30. 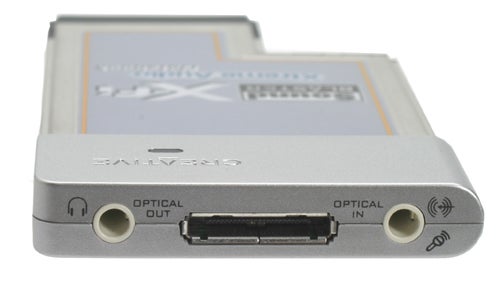 The card itself looks identical to the Creative Sound Blaster Audigy 2 ZS notebook, except in silver. It’s attractive enough, but it’s not the most solidly built device. This is the first time I’ve used an ExpressCard slot and I found the card doesn’t feel particularly secure when it’s been clicked into place. As it requires a gentle push inwards to unseat it, plugging in an audio cable can very easily unplug the card. This isn’t a criticism of Creative but I found myself preferring the feel of the older PCMCIA slots.


One of the main compelling reasons to purchase a card such as this would be the lack of ExpressCard sound cards out there. Obviously, USB is always an option but I find my Audigy Notebook gets used so regularly as it’s such as simple and small device to carry round in the bag and requires no extra cables. Recognising this, the Xtreme comes with a rather neat pouch to protect it against all travel travails, along with the customary headphones (in white of course).

Software installation under Vista was straight forward and featured the usual Creative software jungle. The audio console is similar to the one used in the other X-Fi cards but this one only has the entertainment mode. It’s worth pointing out that there are no ASIO drivers for this card and even Asio4All didn’t want to work with the card, although the internal one worked fine). Creative now includes an auto update applet. Normally I dislike these but it’s rather more convenient than wading through Creative’s site. There’s an optional download of Alchemy, which provides EAX effects in games that used to use them in hardware under XP, but which due to Vista’s rather ham fisted approach to audio, no longer has these effects. Controversially, Creative is charging for this application for cards not under the X-Fi brand, but if you intend on any game playing, it’s definitely worth the download. 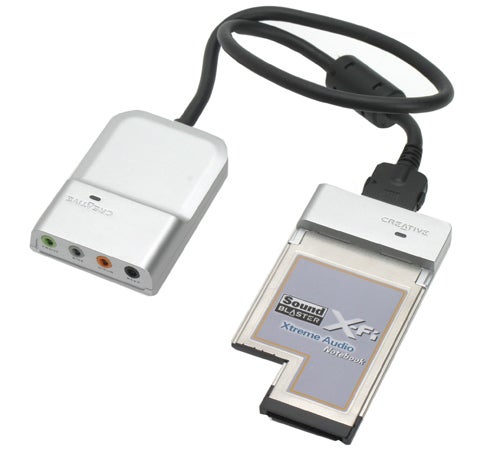 CMSS first appeared on the Audigy cards and it works as well as always here (which is not at all for me, but I have weird ears and any psychoacoustic-based surround sound has little or no effect, common for about 20 per cent of people).

For certain types of compressed music, particularly music that has a strong beat, the Crystalizer can be quite effective. As a music producer myself, I am not fond of anything that reports to ‘enhance’ the sound of music tracks – that’s what we spend most of our time doing in the first place. Adding any environmental effects to music, such as the EAX reverbs, is enough to make me go green and require a trip to the nearest sartorial boutique, but MP3 compression can do horrific things to audio, so the Crystallizer function, in moderation, can help bring some life back to a limpid MP3 track. It sounds like a cross between the traditional ‘loud’ function as found on many tape players and some interesting processing, to make the sounds with a swift attack sound sharper and better defined.


As an alternative to onboard notebook sound, the Sound Blaster X-Fi Xtreme Audio Notebook is a reasonable solution, but I really don’t like having to source and buy the breakout box separately, which does push the price up out of the low budget range.