While laptop owners are starting to enjoy graphical power to match their desktop cousins, portable machines still tend to lag behind when it comes to audio. As the foremost name in PC audio, it’s no surprise therefore that Creative has stepped up to plug the gap in the market. While there are plenty of USB sound cards for laptops these don’t offer the convenience of the PC Card form factor and are held back by the limited bandwidth of USB. Enter the Creative Sound Blaster Audigy 2 ZS Notebook. 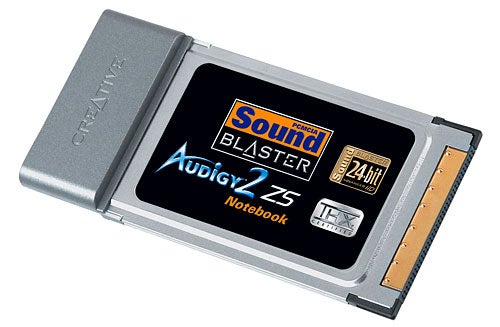 Featuring the same EMU10K2 audio processor as its PCI counterpart, the Audigy 2 ZS Notebook represents the portable sound card to be released with full hardware mixing, surround capabilities and EAX 4.0 Advanced HD – a great range of features for the price. With the sound card market so competitive, it’s in Creative’s interest to attract as many market segments as possible.


As such, the Audigy 2 ZS Notebook is designed to be a one-stop solution. You get Dolby Digital EX and DTS ES decoding, of up to 7.1 surround channels, a healthy signal to noise ratio that will have no trouble walking over an onboard sound chip, EAX support, hardware mixing to reduce the load on the CPU and high resolution DVD Audio. For gamers in particular, no other card offers this range of features, and it’s potentially a perfect companion for laptops that like to take their owners to LAN parties.


The card is supplied with a connecting cable featuring three female mini-jack connections; the same kind of connection to be found on the back of a conventional 5.1 capable consumer sound cards. On the card itself are two further mini-jack connections for headphones, and microphone or line inputs. These are multi-purpose and double up as optical digital connectors. 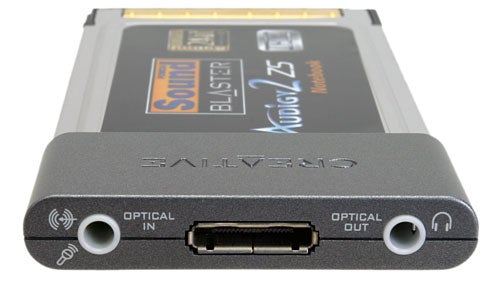 Three discs are included, a driver disc, a DVD Audio demonstration CD and a rather self-serving promo CD advertising EAX capable games. No games are included however, although you do get a very serviceable pair of earphones as part of the package and a cheap looking plastic wallet in which to store the card.


Physically, the card is well designed and looks very smart, sitting flush inside your laptop’s PC card slot. Creative suggests that the breakout cable is left connected to the speakers and detached from the machine rather than fiddling with all the audio connections every time the laptop is moved.


I have never had much affection for the Creative software suite, which seems to become more bloated with every new piece of hardware released. A full install of the ZS notebook involves no less than seventeen separate applications – overkill in anybody’s book. Many are confusingly titled and could very easily be merged together. For example, the equalizer application installs separately from the mixer application, which is different from the speaker app.


Whilst the card has the capabilities of a desktop Audigy 2 ZS, the range of accessible features does depend on the speed of the laptop’s PC Card bus. The two modes are high performance mode and standard mode. Many of the headline features, such as EAX 4.0, hardware voice mixing and high resolution DVD Audio (not to be confused with DVD movie soundtracks) are only possible in the high performance mode and this is something that I would have preferred to see more clearly highlighted on the packaging. In standard mode the notebooks CPU will be used instead. However, unless you have a recent laptop, you can’t be sure as to which features will be available until the card is installed.

Testing involved two notebook machines, a Microstar machine from 2003 with Windows XP Service Pack 2 and a new Advent machine running Service Pack 1, both with broadly similar specs, substantially above the Creative recommended specifications. Results were very mixed, due in the main to what appear to be software issues. One of the tools is a diagnostic program that suggests the most suitable mode, depending on the bus speed of the PC Card slot. On the Microstar machine, high performance mode was automatically selected, but testing using the DirectSound, WDM and ASIO 2.0 drivers gave nothing but crackling, as did DVD Audio. There was clearly a problem with the speed of communication over the interface, Creative isn’t responsible for the particular PC Card chipset in the computer, but the performance utility should have detected this. 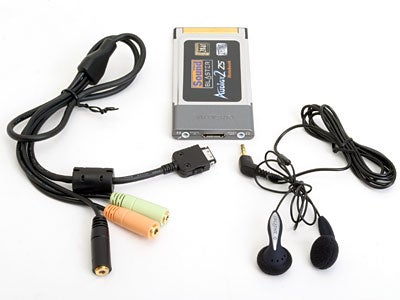 The Advent machine however, gave the expected results with all the high performance features available. Unreal Tournament 2004 in particular sounded really great with full 3D sound and EAX support and it was definitely satisfying having so much noise emerge from a portable machine. Matrix Revolutions sounded just as impressive with its Dolby Digital 5.1 soundtrack (the card can also take a 5.1 digital optical signal from an external device, decode it and send the resulting signal through the analogue cables).


To see how the Creative handled games compared to the on board audio, we benchmarked the built-in time demo of the Quake III powered Return to Castle Wolfenstein. As it turned out the ZS notebook was actually slower than the on-board sound. The difference wasn’t substantial – 116fps using high performance, 109fps using standard and 126fps with the on-board card) and was narrowed by updating the driver, but it does seem to indicate that there’s a processor overhead in moving the data back and forth across the PC Card bus. This is a perfectly acceptable sacrifice though, particularly if the card is running at full tilt, giving you higher quality output, in full surround sound and with EAX affects as well.


Testing the signal to noise ratio gave me an average value of -80dB, a very respectable figure, although the boast that the card offers ‘256 times the clarity of your basic notebook sound’ is typical marketing gibberish. Still, you should be able to rely on the ZS Notebook for make clean sounding recordings while your on the move. It’s worth knowing though, that like all current Creative cards, the clock rate is set to 48KHz requiring the more common 44.1KHz rate to be re-sampled before it’s played back. My personal theory is that Creative got a job lot of 48KHz crystals off the back of a lorry whilst developing the SoundBlaster Live, and has been working their way through them ever since – well, it’s as good an explaination as any 🙂


Other loose ends in the software suite includes the Creative Multi-Speaker Surround (CMSS) technology. Designed to enhance the stereo or surround stage across multiple speakers, playback appears to revert to mono when headphones are chosen under speaker settings. And unless the latest diagnostic tool is downloaded, running the application whilst in standard performance mode, rather unhelpfully doesn’t detect the card at all. Less serious but still irritating is the time taken to detect whether the headphone socket is being used, with a lag of a few seconds before the change over from speaker output to headphone output occurs. 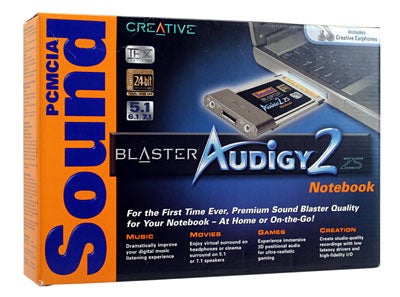 Overall though, the Creative Sound Blaster Audigy 2 ZS Notebook is the missing link as far as laptops being able to match their desktop cousins. The sound quality for both playback and recording is top notch and software bugs aside, performance is solid. That said, unless the card is running in high performance mode, you won’t be able to take advantage of its most attractive features.


This is potentially a killer card for notebook users. The thought of having portable surround sound solution is greatly appealing and the price is affordable too. It also enables laptop owners to enjoy DVD Audio discs. Software bloat and some annoying bugs aside this is a solid portable implementation of Creative’s desktop sound card – anyone who actively plays games or makes music on their notebook should take a close look at this card.