Sifting through my record collection this morning I found an interesting broken one. It’s called, ”Did you know that the iPhone’s bundled headset is pretty terrible? You should really think about replacing it.”


Lame witticisms aside, it’s a point as true as ever. Fear not, however, because there are plenty of alternatives available for those with a little common sense and some spare cash. The latest to enter the TrustedReviews labs is the Creative HS-930i. 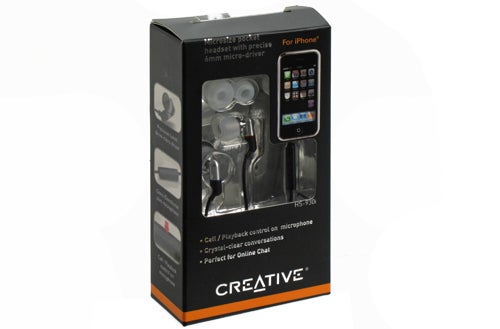 Unlike some more recent “Made for iPhone” headsets, the HS-930i’s in-line remote doesn’t have volume controls, instead featuring only a microphone and play/pause button. Although that button will also work for skipping tracks and activating voice-control, so perhaps ‘play/pause’ isn’t the right name for it. A notable positive is that the HS-930i works fine with older iPhone models – a feat the V-Moda Remix Remote couldn’t realise.


Interestingly enough the industrial design of the HS-930i looks like it could have come from the workshop of Jonathan Ive himself, with the intention of being paired with the original ‘2G’ iPhone. The earpieces are constructed half from metal and half from black plastic, with a thin red and blue band denoting right and left, respectively.

The entire arrangement – cable and all – only weighs 12g and as a result the earpieces are practically unnoticeable when worn. This weightless feel is in spite of the in-line remote being placed on the right hand side, similar to the Apple headset. It’s arguably a better placement than the common alternative placement at the split in the cable’s ‘Y’ shape, as it puts the microphone closer to your mouth. I’m not given to a preference either way.


Creative supplies the (so far as I am aware) unique addition of a splitter cable turning its single 3.5mm jack into separate microphone and headphone connectors, for use with a PC.

There are no problems with the quality of this headset’s microphone. Unless the various people I spoke to via the HS-930i were inexplicably lying, I’ve no reason to believe that my voice wasn’t heard loud and clear.


I’ve no complaints about the headset’s reproduction in this respect either. Speech is rendered with detail and clarity far ahead of that on offer from the bundled iPhone headset and on par with other, similarly priced headsets, such as the V-Moda Remix Remote and Etymotic Research hf2.

The same cannot, alas, be said for music piped through the HS-930i. Although, again, an undeniable improvement on the standard iPhone headphones, the HS-930i isn’t what you could call audiophile-grade listening equipment.


The most obvious problem is the lacklustre bass response. At best the result is a lack of ‘kick’ to any bassy music. At worst drums tend to sound more like they’re coming from speakers on the opposite side of a wall than from drivers nestled inside your ear canals.


This might be closer to forgivable if the mid to high end was particularly noteworthy. As it is, I’d call the output verging on disappointing. There is at least reasonable clarity and definition, with voices in particular shining through and cymbals ringing out distinctly above the mix. The rest of the soundstage tends to come across a little muddied, though.

These short-fallings become abundantly apparent when comparing the HS-930i to the competition. The Etymotic Research hf2’s impeccably accurate reproduction simply blows the HS-930i out of the water. And while the V-Moda Remix Remote can’t be said to offer much in the way of a quality improvement, there’s compensation in the form of a delightfully punchy bass to be had, which is exactly what these ‘phones lack. Attractive design can’t compensate for such disappointing performance in my book.


The Creative HS-930i headset is a massive improvement on the iPhone’s bundled headset. Unfortunately, apart from the attractive design, there’s nothing to recommend these over a number of better-sounding and similarly priced upgrade options.