Creative has a flair for producing affordable versions of high-end headphones. Its in-ear EP-630s were similar to the more expensive PlayGear Stealths, and the Creative HN-700s, were just as effective as pricey noise cancelling headphones from Bose. These HQ-2300Ds are a similar concept to the Portable Home Theaters but cost almost half the price. How do they fare? 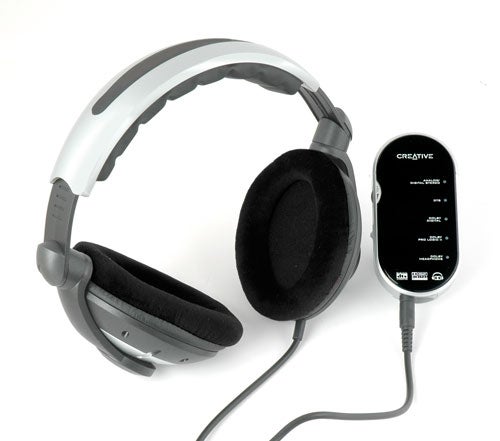 As with the HCTs, the Creative package consists of a set of headphones bundled with a decoder featuring Dolby Headphone technology. This small box of tricks is the real heart of the package. Creative should know a thing or two about making surround sound decoders, having included them with its speakers sets for an age. However, this is the first time it has offered anything with Dolby Headphone. What this technology does is give you 5.1 sound experience using any pair of headphones. And it does work. Creative has its own surround technology called CMSS-3D but this requires the power of an X-Fi sound card and it’s not physically or economically possible to shrink down an X-Fi into a small decoder box that you can attach to any headphones.


The decoder box is an elongated oval sporting the Dolby Digital, DTS and Dolby Headphone logos. It’s powered by two AA batteries with a set included in the box. Creative claims that they’ll last for 10 hours of continuous use but I did find myself wishing that the decoder has an auto-off ability when it detects no input for a certain amount of time, as it’s all too easy to leave the decoder on and unnecessarily run down the batteries.


At the top of the decoder are two 3.5mm inputs – one for analogue sources and one for digital, the latter of which will also accept an optical input. At the base are two inputs for connecting up to two pairs of headphones, so you can listen in with a companion. On the right are two buttons, one for enabling and disabling the Dolby Headphone filtering and another to enable or disable Dolby Pro Logic II, though this is only relevant for, and can only be applied to, stereo signals. On the left side is a volume control and a slider for powering the unit on and selecting between optimising the sound for music and for movies and games. 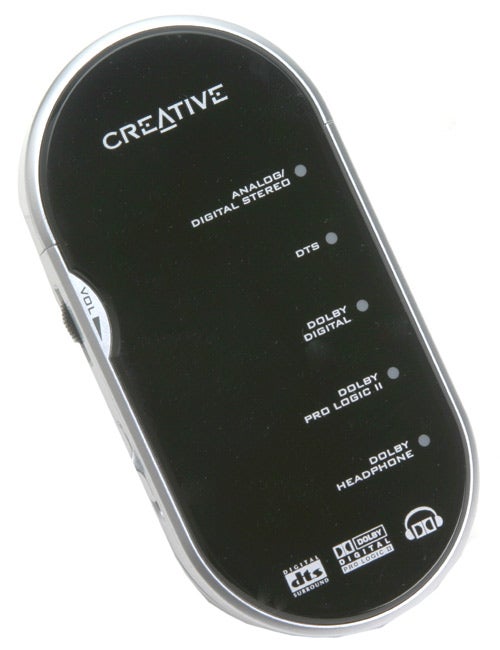 In the vacuum sealed package, (which is by the way difficult to open without a nearby lightsaber) you get an RCA SP/DIF to mini-jack cable, for connecting to any coaxial source. You also get a regular stereo audio cable and an RCA to stereo adaptor.


The way the decoder works is quite simple. If you input a Dolby Digital or DTS signal, once you press the Dolby Headphone button this will be processed to optimise the surround effect for headphones. However, Dolby Headphone will only work its magic on 5.1 sources so if you input a stereo signal then it needs to be upmixed. This is where the Dolby Pro Logic II button comes in – – press it and it upmixes to 5.1 enabling Dolby Headphone to do its work.

Though Creative includes a set of headphones in the box, the decoder can of course be used with any pair of your choice. This means that if you prefer to use a set of noise cancelling headphones on a train or plane you can still get the benefit of Dolby Headphone. However, the ones supplied are pretty good, especially considering the price. They are quite large, but the benefit is a fuller sound. The headphones are a closed back design, which helps to keep extraneous sounds out and at 40mm the driver units are large enough to give plenty of bass without sounding over exerted. The headphones are thickly padded and the drivers aren’t placed too close to the ears, which meant that they could be worn for extended periods without a problem.


So how did they sound? The first test I made was to plug them into my Sony PSP and fire up Ridge Racer. I was immediately impressed. With just the Dolby Headphone button lit the sound became noticeably more open and spacious removing the sense of the sound being boxed up inside. Pressing the Dolby Pro Logic II button and the effect was even more marked. The commentator’s voice became more resonant and clear, while on the race replays there was a sense of sounds panning and movement. 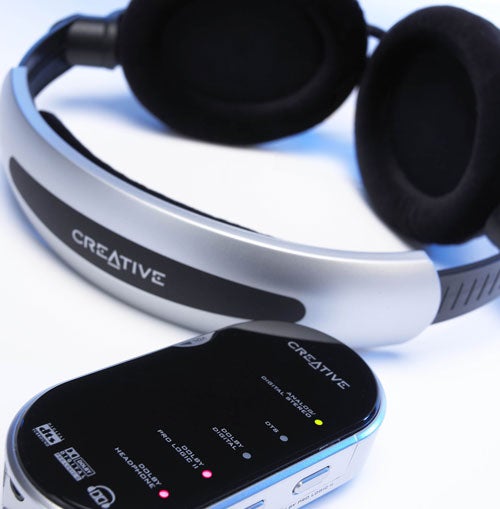 I then tested DVD playback using Star Wars, Lord of the Rings and Men in Black. With a full Dolby Digital or DTS bit-stream to work with the decoder did a good job at mimicking an actual speaker set-up. Dialogue, was moved to centre stage as it would be with a proper speaker set-up and some widely off-axis sounds from Men In Black, sounded at first as if they were coming from an outside source.


Music on the other hand doesn’t always benefit as much from the surround processing, though this depends of the content. With some music it really worked and with other not so much. 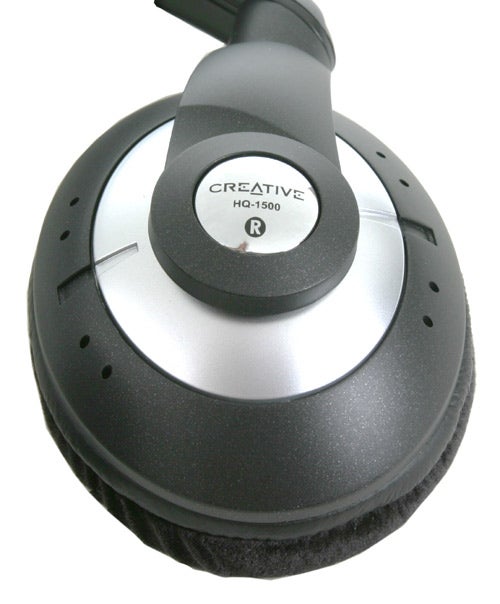 If I was to nit-pick I have to admit that once you turn on the Dolby Headphone and Pro Logic II buttons the sound does take on a noticeably processed quality. However, after experimenting with having it on or off, or using a regular set of headphones, I wouldn’t want to go back to a conventional set of headphones for games or DVDs and I’d use it occasionally for music.


Ultimately, it’s not going to be a replacment for a full-on surround set-up but if you do have to listen on headphones, this is a great alternative.


The other niggle is that an optical cable isn’t included in the box, which meant I couldn’t test it with my Xbox.


In the future I would love to see the technology shrunk down even further. Perhaps the next PSP or equivalent could have it built-in? In the mean time, this package is easily recommendable, especially seeing as Ebuyer is offering it for £20 less than the RRP.


What’s really impressive about the Creative’s is that the Dolby Headphone technology works so well, truly enhancing the listening experience when playing both stereo content and surround from DVDs, though the effect on some types of music might not be to everyone‘s taste.