The idea of carrying a lot of equipment around in order to enjoy audiophile sound quality and stunning music should not be something dismissed out of hand. The sheer pleasure that can be had from adding a decent pair of noise-cancelling headphones and a portable headphone amplifier to your setup is incredible to behold.


But you have to draw the line somewhere; bigger isn’t always better, after all. And that’s the feeling I got when I first clapped eyes (and hands) on Cowon’s ‘luxury’ personal media player (PMP), the Q5W. Though extremely solidly built, with a metal body that feels as if it’s armour-plated, this player is just too heavy at 380g to go anywhere but a briefcase or bag. I carried it in a sturdy inside jacket pocket on more that one commute and felt distinctly uncomfortable with my jacket insistently tugging at my left shoulder. Compared to the more pocket-friendly Archos 605 WiFi or Cowon’s own A3, it’s a beast. 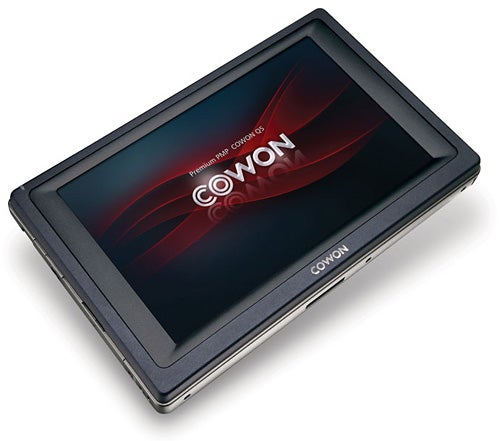 Its size of course, is largely due to its huge, 800 x 480 5in screen. This is one of the largest you’ll encounter in a PMP, and it’s stupendous to watch. A glossy finish contributes to dark black levels and a smooth movie-watching experience that’s undeniably top of its game. And there’s plenty of juice in the built-in battery to enjoy it out on the move. It can offer a decent seven hours of playback time – enough for several full-length movies, including some of the longer ones.


But again, it’s not quite good enough to justify the size. Though a pleasure to watch, the aforementioned 605 WiFi and A3 manage to squeeze only slightly smaller 4.3in and 4in screens into much slimmer and more compact chassis. The Q5W also runs pretty hot, and with no kickstand, gets uncomfortable to hold after a while.

Of course size and weight isn’t the only big thing about the Q5W. It’s also big on features. Rammed into this player’s sturdy chassis is a round-up of extras to make a fully-functioning PDA go green at the gills: there’s Bluetooth, Wi-Fi, an FM radio, a 40GB hard disk and it all runs on a full copy of Windows CE Pro 5.0, which the device drops into whenever you enter web browsing mode. The latter allows you to read and edit Office files (though not the latest .docx formats), play Solitaire or Freecell and even use MSN Messenger.


Around the edges of the device are more useful features. On the top edge is a pair of reasonably loud speakers (given the size), and under a flap on the side there’s not only a mini-USB port but also a full-sized USB-A port for connecting low-powered USB thumbdrives and hard disks for extra capacity and file transfer.

On the bottom edge of the Q5W is a proprietary connector which allows you to hook up the player to your TV via composite and, more impressively, S/PDIF audio (coaxial) plus component video. There’s no recording facility as there is on the A3, but you do get a small coin cell-operated remote control, turning the Q5W into a reasonably competent home video playback device that you can operate from your sofa. 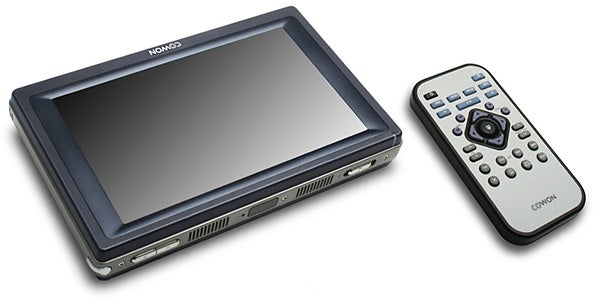 Once again, however, some of this functionality turns out to be a mixed blessing. The device’s main touchscreen interface is simply overlaid on top of Windows CE and it’s a marriage that makes the Q5W feel unfinished and old-fashioned – not something you want when you’ve just spent 400 big ones. Whenever you drop out of the Cowon interface, for example, you have to deliberately double-click an icon on the desktop to get it back. Web browsing on the Q5W is similarly dissatisfying: many websites simply don’t look right – and though that’s nothing new to Windows-based mobile devices, it’s clearly no iPhone.


The touchscreen interface, once fired up, works well, with the main controls accessible via a row of control ‘wings’ that fall conveniently under your thumbs on either side of the screen. You can opt to control things entirely from these context-aware controls, or you can dive into the main screen and change things directly – you’ll need the stylus here as the buttons are small and fiddly, but the level of control on offer is quite impressive. Dynamic playlists are constructed quickly and easily, and there’s a host of settings at your fingertips. 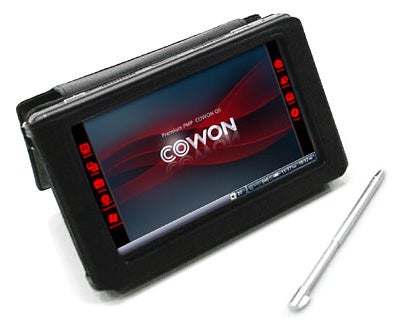 But again things are undermined. For instance, the Q5W doesn’t give you the option to display songs and tracks using tagged information – a quite bizarre ‘feature’ that forces you to navigate by folder in order to find the tracks and movie files you’re after. It’s hardly ideal. It commits random acts of weirdness, on one occasion almost deafening me with a momentary volume increase as I fiddled with the player’s Mach3Bass setting. And it isn’t exactly sprightly either, with delays occurring when skipping between folders and different screens.


There always seems to be a ”but…” with this Q5W, and the list doesn’t end with the OS. Another focuses on file formats. Though the player is purportedly compatible with a huge list of video files, including DivX and MPEG-2 files, it’s far from a drag, drop and watch experience. I tried to get it to play a selection of native .divx and .vob files and they simply wouldn’t work until I’d converted them with the bundled Cowon Media Center application. This does make the process simple with predefined device profiles for the Q5W, but it’s still a pain, and all the more disappointing considering that the same company’s (much cheaper) A3 PMP will play both file types natively. It also isn’t compatible with H.264.

Things finally improve with sound quality, however. To add to its already-notable video performance, the Q5W impresses again with its sheer drive and punch. It’s capable of the sort of scale of attack that conveys real drama and atmosphere to movies. Watching the opening scenes to Joss Whedon’s gritty, cult sci-fi adventure, ”Serenity”, hooked up with my favourite headphones (a pair of Grado SR325i’s) I was convinced of the Q5W’s abilities. The great screen coupled with that awesome sound involves you to an extent that no other media player I’ve reviewed is capable of. 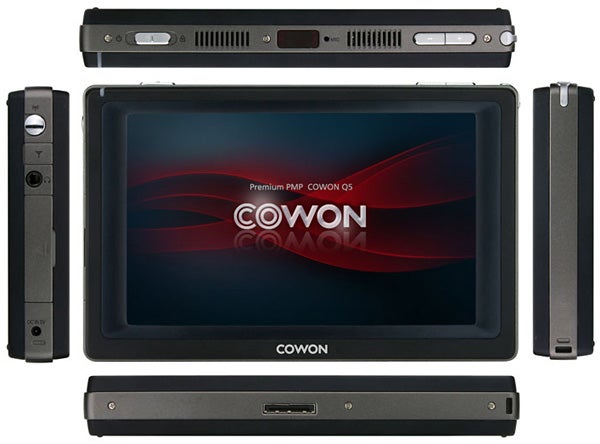 Music sounds equally impressive, but it’s not perfect. The bass and drive are there, but when pushed hard this player starts to crack up. Newton Faulkner’s acoustic guitar sounds holographically realistic, but his voice sounds a little grainy at top volume and it lacks the ultimate in control when things get really hairy. It could do with a bit more warmth too. Coupled with headphones like the Grados – which are unforgiving on the detail front – certain types of music can be tiring to listen to. But this is a small complaint, and the overall quality of the output is as good as anything I’ve listened to.


Listening to Faulkner’s stunning cover of Massive Attack’s ”Teardrop” is enough to raise the hairs on the backs of your arms, and was superior in all departments in a back-to-back comparison with the Sansa View. Each part of the music was more clearly defined, including low notes, which have a punch and focus that’s lacking in most other MP3 players. It’s on a par with Creative’s Zen Vision W for sheer drive – an impressive feat. 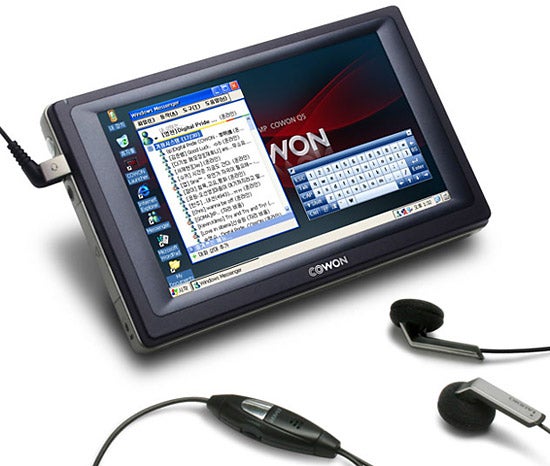 It helps, of course, that Flac is supported, as well as Ogg and the more usual WMA and MP3, but there’s another of those infuriating caveats to deal with here. To get the former to work smoothly without random interruptions every 30 seconds or so, you have to install a firmware update. Battery life for audio also isn’t wonderful at 13 hours continuous playback compared with the Archos 605 WiFi’s maximum of 25 hours.


There’s no doubting that Cowon’s Q5W is a powerhouse of a PMP. But does it make the case for its size and weight successfully? I’m afraid to say it doesn’t. For while it may have an impressive array of connections, a fantastic screen and awesome sound quality, there are simply too many issues.


At this sort of a price, you’d be rightly justified to expect perfection – £400 is an awful lot of money for a plain media player – but the Q5W doesn’t provide it. Its capacity is low, with even flash-based players now snapping at its heels, its usability is suspect and its video format compatibility doesn’t match up to its lofty claims.