For a relatively small company, Cowon has developed an awfully big reputation for its MP3 and PMP products. Its S9 is one of the most highly-regarded PMPs out there, while the company has won an enviable following amongst the audiophile crowd for the simple reason that it produces some of the best-sounding digital audio players on the market.


The subject of today’s review – the iAudio D2+ – comes with some high expectations. It’s the successor to one of Cowon’s most popular efforts, the D2 which has, I’m told, sold over 500,000 units worldwide to date. That’s chickenfeed for the likes of Apple or Sony, but not at all bad for a Korean brand that most people in the UK won’t even have heard of. 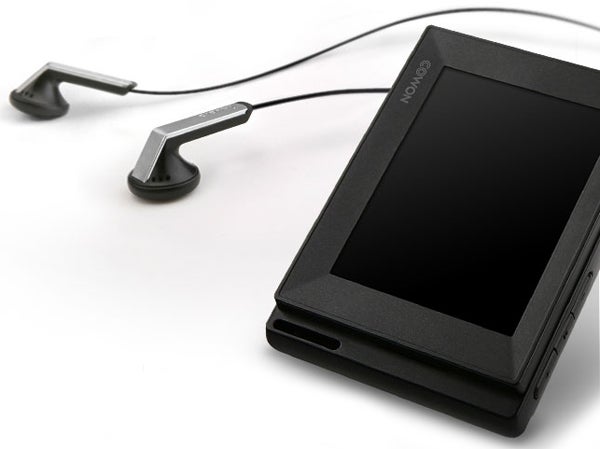 Those of you who have may remember Jon’s review of the original, which acclaimed it for its excellent sound quality but condemned it for its ropey DAB radio and its rather excessive price tag. The D2+ I’m looking at now no longer sports the former – a DAB version will be available later if you want to see if Cowon has fixed the issues – and as a result the latter has been cut back to a slightly more reasonable figure. Only ‘slightly more’, mind you. At £99 for a 4GB version this is an expensive player, particularly when you can get 8GB versions of the Sony NWZ-S639 or Samsung YP-Q1 for £10 to £20 less.


To some extent, the high price is justified by the D2+’s feature set. Like the D2 before it, it’s a credit-card sized touchscreen PMP based around a 2.5in TFT screen with a 320 x 240 pixel resolution. What’s more, it’s one that comes with features like an SDHC expansion slot and comprehensive audio file support that, while irrelevant to some, are absolutely essential to a certain breed of audiophile. From the styling to the interface to the overall specification, there’s a feeling with the D2+ that it’s not about producing eye-candy or any kind of wow factor; it’s a player that takes care of the business of media playback, and quality is very much the core concern.

This is certainly reflected in the physical design which is, if anything, even more stripped back than the already minimalist D2. It’s all very black, very matt and very square-edged, and even the D2’s meagre design frills – the silver Cowon badge and right-hand strip – have been dispensed with. Controls are limited to a two-way power/hold slider with up, down and menu buttons on the top, and the only other points of physical interest are the standard mini-USB connector and a proprietary AV output on the left-hand side, with an SDHC memory card slot at the bottom. This will take cards of up to 32GB in size, and as £30 will buy you 16GB these days that’s a pretty affordable way to turn a 4GB device into a 20GB device in a matter of seconds. If you like your lossless audio, this is something you’ll soon come to appreciate.

The user interface has had more of an overhaul, replacing the relaxed, blue GUI of the original D2 with one broadly similar to that of the O2 we looked at a few months ago. To be honest, I’m not a huge fan. First, it’s built for a stylus not a finger, practically forcing you to use the odd triangular ‘pick’ you’ll find in the box, which attaches to the player via an elastic loop. Screens are cluttered, fiddly and there are often too many cryptically labelled buttons and indicators on display at any one time.

The menus aren’t particularly intuitive and it always seems to take two clicks to find an album or track, when it should take one. If you do plump for one of your own pinkies instead of the stylus you will find it takes a bit of prodding before you get results, but at least you can take better advantage of the sweeping gestures used to scroll through long lists of tracks or albums. Yet even here Cowon knows its market, with the GUI offering features that owners of other players always seem to be crying out for. Dynamic playlists? Not a problem. Want to set how long tracks take to fade in? The choice is yours.


Further, as with many Korean players of late, the D2+ comes bursting with secondary functions. There’s a built-in voice record function, and if you’re not satisfied with the surprisingly decent results from the internal microphone, it’s possible to get a line-in cable that connects to the AV connector and use that to record audio at bit-rates of up to 256Kbps. 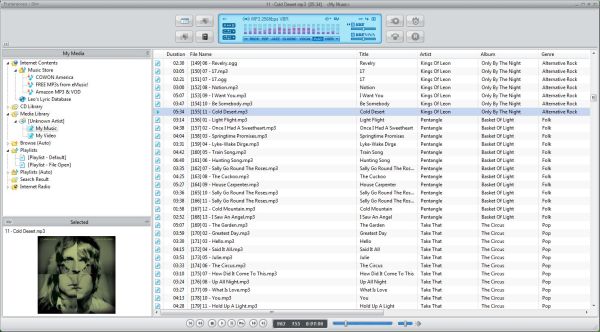 We also get a built-in FM radio complete with automatic channel search, a photo viewer application, a text viewer, touchscreen notepad and calculators in both normal and scientific forms. There’s even a Flash player for those of you who want to use Flash-based utilities or games. A quick Google search will find compatible ones, though I’ll warn you that the general standard isn’t very high.


After the O2 – the little player that could play just about everything – video playback is disappointingly a bit of a struggle with the D2+. Only AVI and WMV file formats are supported, and anything with a resolution above 320 x 240 just won’t play. You can use the bundled Cowon media management app to convert and transfer other video files for use on the player – preset configurations are provided – but in my experience the results are mixed. Some files converted perfectly, but two MPEG-4 files I tried had serious issues with sound after conversion, with the audio track running at a slower speed and lagging the video by a couple of seconds.

Luckily, the quality of the video playback is perfectly decent. The D2+ doesn’t sport the clearest or brightest little screen I’ve ever seen, and I found myself missing the similarly sized, 16:9 format screen of the Samsung YP-Q1, but colours are rich and motion is nice and fluid. There’s also good news for fans of iPlayer. After a temporary glitch where the menus seemed to conflict with the video image, a downloaded WMV of Later with Jools Holland played perfectly well on the D2+.


That said, I think that most buyers of the D2 regarded video playback as a bonus feature rather than a compelling reason to purchase. The D2’s biggest selling point was always its superb audio playback, and the same holds true of the D2+. In fact, if anything it’s actually a better player, for the simple reason that Cowon’s highly-regarded JetEffect audio processing technology now incorporates BBE+. 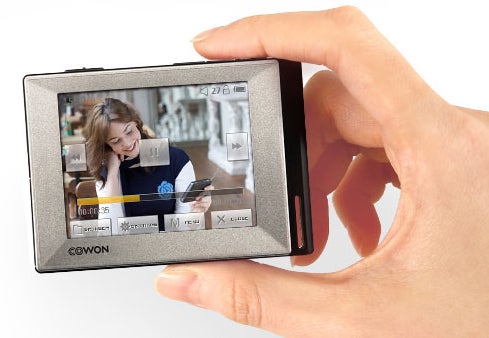 As a rule I’m not a huge fan of additional processing. Sometimes it helps ameliorate a weakness of the player or the headphones, fortifying the bottom end or enhancing mid-range clarity, but in a lot of cases it just takes the sound further away from what the people producing your music originally intended. The strength of JetEffect is that, while you get a bewildering range of options to tinker with, you do get a highly customisable sound and one that, used carefully, does genuinely sound better than the basic, untreated output. With a flat EQ and everything switched off the D2+ is a very good player. With the sound tweaked just a little, it’s right up there with the best from Samsung and Sony, not to mention Cowon’s own S9. 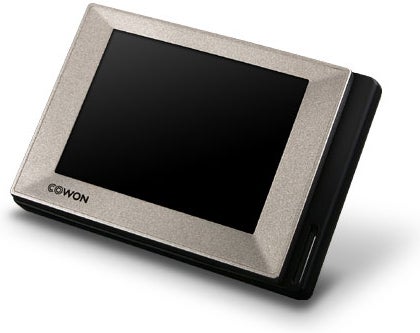 Even with the bundled headphones, which aren’t great, you can get some reasonable results. Nudge the BBE and Mach3Bass settings up a couple of notches, then do the same with StereoEnhance, and you have a sound that – were you stuck somewhere without any decent IEMs or cans – you could actually listen to. Listening to Moon to Moon from the new Bat for Lashes album, there’s enough clarity to do the minimal instrumentation justice, and enough warmth to make the vocals come alive.


Play Blue in Green from Bill Evans’ Portrait in Jazz and it doesn’t sound bad at all, the thick chords and elegant lines of the piano working well with the restrained bass and drums. Things get a bit muddy when you put on something rockier, like Audioslave’s Revelations, but when you consider that we’re talking bundled ‘phones, that’s not really much of a complaint.

With a pair of decent headphones, the D2+ is just a pleasure to listen to. The sound from my Denon AHC-551s was rich, warm and lovable, with a rock solid bass but more definition than I sometimes get from lesser players. The soundstage from the Denons can be crowded, but a little tweak to StereoEnhance (though not the more aggressive surround settings) seemed to help. Plugging in a pair of Sennheiser HD595s I was even more impressed.


The heavier beats and more complex production of Bat for Lashes’ Daniel really came alive, and while my eardrums have been spoilt slightly through listening through the iBasso D2 headphone amp, even unamplified the HD595s delivered a gorgeous, crystal-clear, superbly balanced tone. It’s certainly a versatile little devil. The stripped-back grunge of the superb Brendan O’Brian remix of Pearl Jam’s Ten sounds magnificent, yet the D2+ can cope with the complex, interweaving metal of Mastodon’s Crack the Skye with equal skill.

It even triumphs with the laid-back country-rock of Ryan Adams’ Jacksonville City Nights and the stormy drama of Wagner’s Tristan and Isolde. Some players perform brilliantly with specific musical genres but suffer when it comes to others, but the D2+ seems to cover all the bases, particularly if you’re prepared to do a little fiddling with those settings.


Audio file format support is generally good, with OGG, APE and FLAC all handled on top of the usual WMA and MP3 options. However, there’s no support for AAC, and I encountered a few issues with FLAC files. Tracks I’ve heard working perfectly well on the Samsung YP-Q1 didn’t appear on the D2+ or refused to play. Apparently, a forthcoming firmware update should fix this. 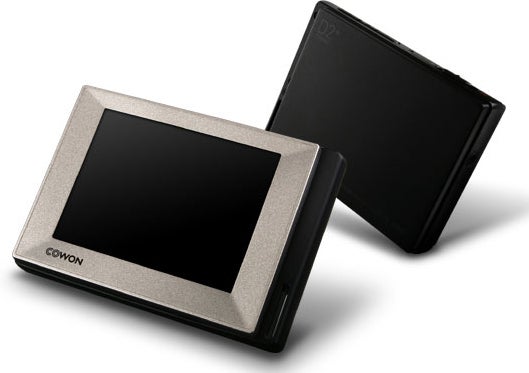 The D2+ isn’t a player for everyone. The design is uninspiring, the user-interface is mildly horrid and the price is still a little too high for my tastes, even given how easy it is to add capacity. For the audiophile market that embraced the original D2, however, I think that other factors, like the superb audio quality, customisable sound and SDHC slot more than compensate, as will the excellent 52 hour battery life. It’s not cheap, it’s not bold and it’s not beautiful, but if the sound in your ears is all that matters, then the D2+ is a PMP to be reckoned with.

Not the best all-round PMP on the market, but its excellent sound quality and expandability give the D2+ an edge for audiophile users.