The latest trend in gaming mice is adjustability, with a host of manufacturers bringing out models that aim to provide the perfect fit for everyone thanks to movable panels.

The latest to join the party is the Cougar 700M. It doesn’t offer quite the same number of adjustable parts as some of its competitors, but with a replaceable heel and a weights system it does more than your basic fixed-frame mouse.

Does it do enough to take on the likes of the Mad Catz Rat 7? Moreover, is it worthwhile getting any of these adjustable mice or should you just find out what shape you like and buy that one instead. Let’s find out.

Like the Mad Catz Rat 7 and Zalman ZM-GM4, the Cougar 700M has an exoskeleton vibe about it. Where most mice have smooth, undulating, unbroken surfaces, the 700M is disjointed, as though it’s an exploded drawing of the mouse it intends to be. It certainly ties in with your typical gamer peripheral themes, so it won’t look out of place on your average gamer’s desktop, but clearly fans of a more subtle approach might want to look elsewhere. 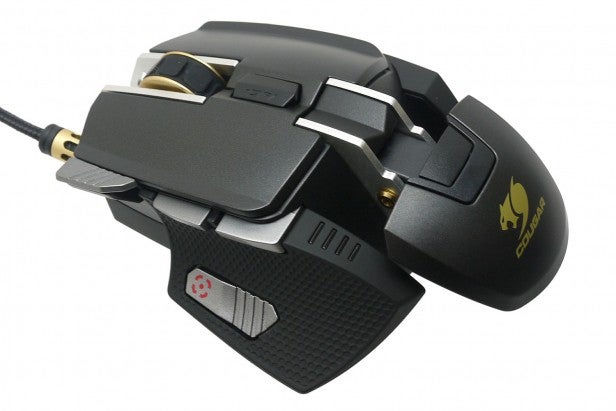 Also like those models the 700M has a core of metal onto which its plastic panels are bolted. A sheet of aluminium is sliced to form a cross, with the cut-out sections folded up to form the vertical core of the mouse. It makes little difference to the usability – nor likely the strength – of the mouse, although neither does it add much in the way of extra weight. We measured it as weighing 114g which compares to 108g for the all-plastic Logitech G402. For those who do prefer a heavier mouse, you can add up to 18g via four 4.5g weights that pop into a slide-out section in the middle.

If you’re a fan of lights on your mouse then the Cougar 700M has you covered, at least a little. While it’s hardly festooned, there is an LED sat below the scroll wheel which projects its light straight forward through gap a in the aluminium. This light can be programmed to be one of millions of colours. 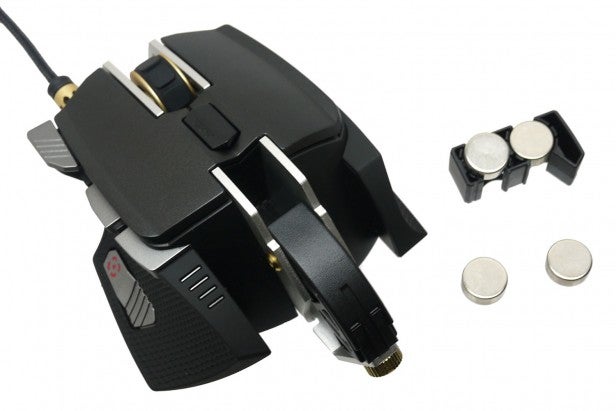 It’s a great addition if you’ve a lightly coloured mousemat or table top, as you get a nice beam of light out the front, but on a typical dark gaming surface it doesn’t really show up all that well.

That relatively light weight combines with enough glide pads to make for a smooth mousing action overall. However, it’s not perfect. The lack of a chamfer to the bottom edges means the mouse can sometimes dig in a little if you’re using a soft mousepad and are moving quickly.

We’re also not huge fans of the overall grip. The sides splay out towards the bottom to keep your finger from slipping under the mouse, but on the thumb side there’s not enough of an overhang at the top to prevent the thumb accidentally sliding into the thumb buttons above. This is a particular problem if you use a finger grip.

This is less of an issue for those who use more of a palm grip, as gripping the rear of the mouse can take off some of the load. This works particularly well thanks to the adjustable heel. It can be adjusted via a rather nice brass wheel to make it sit higher or lower, with the higher position pushing the heel plate nicely into the palm of the hand.

It can also be swapped out for an alternative smaller one, which may be useful for those with smaller hands.

However, the level of adjustability is a far cry from that of the Cyborg Rat 7 or Zalman GM4. Those mice offer width and overall length adjustment, which if you’re going to have an adjustable mouse you’d rather have than not.

Looking at button placement, the main left and right buttons are nicely proportioned and we like the upwards-angled edges that help to prevent your fingers from sliding off the sides. The single button just off to the left of the left button also sits well, falling perfectly into place for quick use with your forefinger. However, it’s only one button, so it’s less useful than the similar two-button arrangement used by several alternative mice, with the pair being ideal for adjusting DPI on the fly. 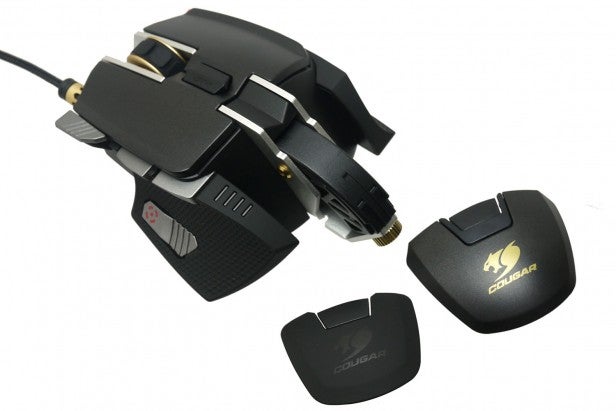 The workaround we came up with was to use that one button for DPI up and the middle button that’s sat behind the scroll wheel to adjust DPI down. It’s not ideal as it means you lose the use of that button for other things, but it at least makes DPI switching manageable.

The scroll wheel itself we’re not overly keen on, as it has a brass edge that’s rather too smooth. On occasion it can mean your finger slips over it, failing to move the wheel, or at least move it accurately.

As mentioned earlier, the back and forward buttons above the thumb are quite easy to press accidentally, but otherwise work well when needed. Likewise the “sniper” button that sits under the thumb is easy to use while still moving the mouse around.

A nice little feature is that the DPI indicator that consists of four LEDs – one each for the four programmable settings – sits on the rear left edge, where it peaks out from between your thumb and fingers for easy at-a-glance viewing.

Like many of the latest high-end gaming mice, the Cougar 700M features a list of internal specs that reads like it could be from a smartphone. There’s a 32-bit ARM processor along with 512K of on-board memory and an 8200DPI ADNS-9800 laser sensor… OK, maybe that last one would be a bit odd on a phone.

Other stats include a polling rate up to 1000Hz, a frame rate of 12000fps, 150ips tracking speed, 30G maximum acceleration, and you can adjust lift height, too.

The upshot of that little lot is that you can store all the mouse’s profiles onboard, so you don’t need to set them up again when using another machine. Moreover it allows for lightning-fast performance. 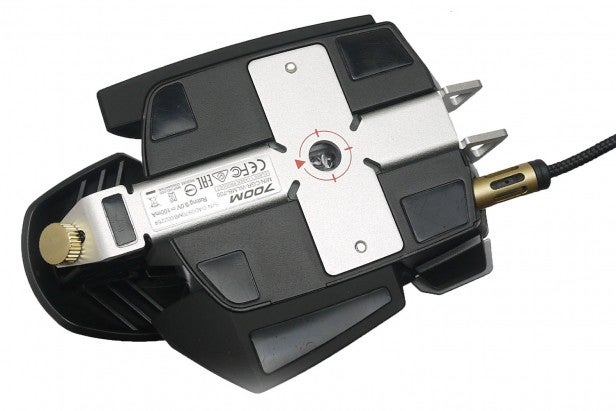 The days of realistically being able to tell the difference between one ultra-high-spec laser mouse and another, in any meaningful way, have pretty much gone, so it was no surprise that the 700M performed exceptionally, leaving us entirely confident in its technical abilities.

No matter how fast we moved, the laser tracked perfectly and worked on all the usual surfaces, with only the classic problem surfaces such as glass proving difficult. All the buttons, too, were fast and responsive, layout quirks notwithstanding.

In something of a rare occurrence these days, the Cougar 700M had some issues upon first installation, whereby it didn’t want to work when piggybacked through our Logitech G710’s USB port. This also occurred using the same port on the Cougar 700K, suggesting it’s maybe a power issue. We’re yet to determine exactly what the issue was, so will report back when we do.

Plugging the mouse directly into the PC’s USB ports, the mouse installed normally, without the need for software. However, as ever, if you want to get the best out of these modern, programmable mice, you do need to install the software.

Cougar’s driver is clearly laid out and generally easy to use, and offers all the usual game profile and macro programming bits you’d expect. It’s all round a pretty good job.

The Cougar 700M is a very good gaming mouse that’s built well, has excellent performance and comes well equipped. In this regard it can go toe to toe with just about any other out there. 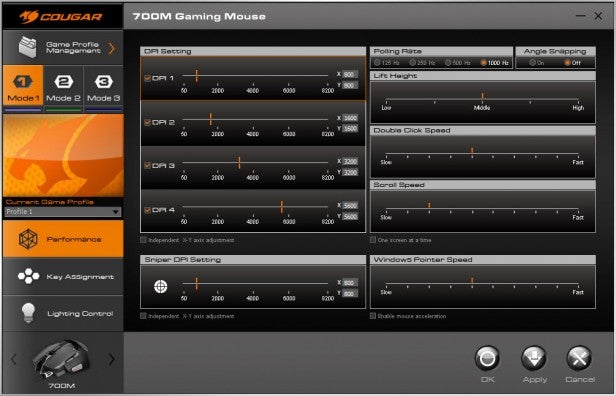 Click through to the gallery to see more screenshots

However, its key selling point is its adjustability and that really does feel like a bit of a token add-on. For finger-grip users the heel adjustment is largely irrelevant, and while definitely more useful for palm-grip users, it still seems like not enough – particularly as the main ergonomic gripes are with other non-adjustable parts of the mouse. As such we’d be inclined to go for one of the more adjustable alternatives instead. That or just get a cheaper fixed-grip one, being sure to try them for size in the shop first.

The real kicker is that right now, in the UK, the Cougar 700M is one of the most expensive gaming mice around, costing around £70. That compares to around £50 for the Mad Catz Rat 7 and Zalman GM4. Only the ever-pricey Razer alternative, the Ouroborus, demands more, and we’re just not sure the Cougar’s worth it.

The Cougar 700M is a highly accomplished gaming mouse with excellent performance. However, its signature feature of being adjustable feels fairly token, while a couple of little ergonomic issues caused us trouble. It’s not a bad mouse, but not one that’s immediately blown us away, considering its price.