Corsair’s new living room PC chassis is aimed at bringing high-end 4k gaming to the TV/sofa combo, while remaining compact and stylish, and without compromising on what components you can use and how upgradeable it is.

The Bulldog is a mini-ITX PC case and these do tend to come small, but for one meant to be used with the latest high-end graphics card its dimensions are impressive. It’s only around 10cm tall, by 30cm square, which means it should fairly easily fit on most TV cabinets alongside your other AV equipment.

The styling, on the other hand, is less liekely to fit in with your other AV kit. It has the premium brushed aluminium you’d expect but the use of red and the mass of angular bits means it still looks well and truly like a gaming PC. Corsair has said, though, that it might tweak the design and at the very least offer a choice of colours instead of the red. 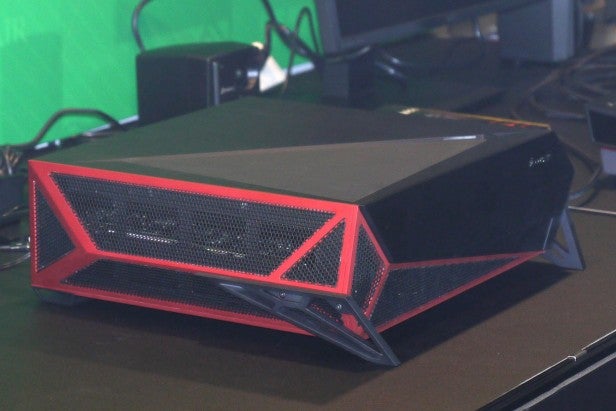 The various outer panels can be fully removed to gain access to the interior so could theoretically be easily replaced either by an official alternative by Corsair or by ones of your own design, if you’re into your case modding.

The key to its compact design is that it uses a custom low-profile liquid cooler for the CPU and a PCI-E cable to mount the graphics card on its side. The result is that it’s much closer to the size of an Xbox One than a typical desktop PC.

There are a couple of obvious compromises to allow for such a compact unit. For a start, there’s no optical disc drive so this can’t act as your main DVD/Blu-ray player as well as a games machine. 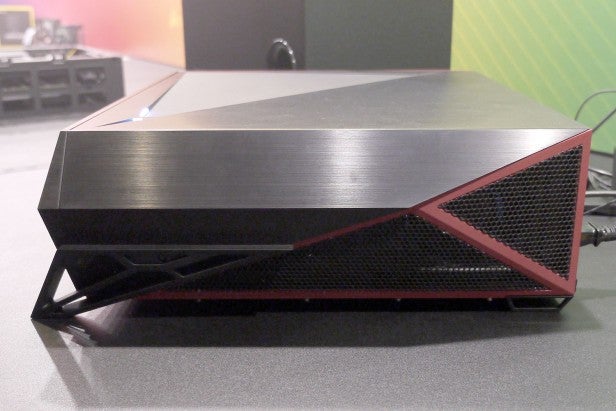 There’s also only room for one 3.5in disk drive and one 2.5in drive. With SSDs being so readily available these days this seems like a small compromise, for a dedicated gaming machine.

Another key factor in keeping the machine so small is the use of an SFX form factor power supply. The Bulldog will be supplied with a suitable model but will also be fully upgradeable to another SFX supply if needed.

Cooling is handle by three main elements. First up is the custom liquid CPU cooler. The radiator and fan for it sit over the CPU, much like with a conventional air cooler, rather than with most liquid cooler arrangements where the radiator is mounted away from the CPU. This may seem counter-intuitive but Corsair is simply relying on the fact that its liquid cooler is more efficient than a conventional air cooler. 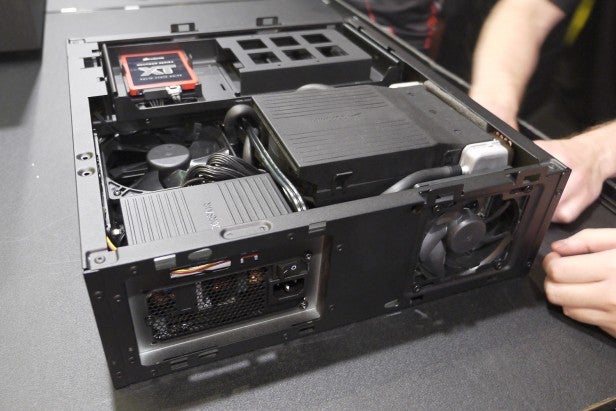 The CPU cooler will come with all versions of the Bulldog but those willing to spend a little more can also grab the HG10 liquid cooler for their graphics card. It’s designed to fit in the Bulldog but will also work in other systems. It combines both a fan and a liquid cooler to wick heat away, with the former used to keep the cards power circuitry cool.

When mounted in the Bulldog, the HG10’s radiator/fan assembly is situated behind the power supply where it blasts the hot air down and out of the case.

If you’re using a conventional air-cooled graphics card the hot air is simply exhausted out the back of the card as usual.

The final cooling elements are the PSU’s fan and there’s one system fan that pulls in cool air from the side of the case and blows it over the general motherboard/CPU area. 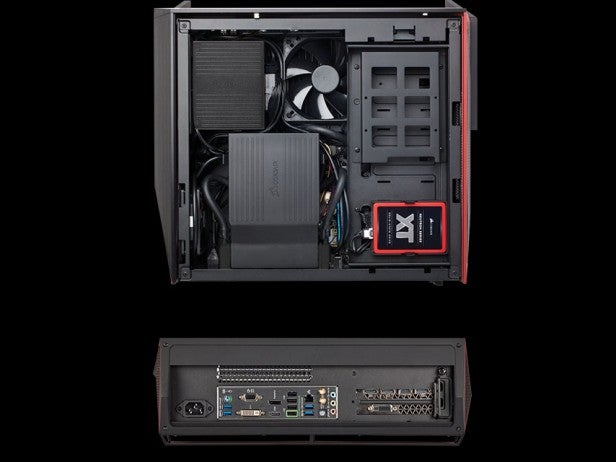 The overall layout is clearly quite cramped but looks simple enough to work with and seems like there should be little reason to doubt Corsair’s ambitions for having the very fastest hardware in this case.

In terms of extra features, there really isn’t much to talk about. There’s no front IO panel, no fan controller, and the only lights are on the lid and they’re just your standard power indicator and hard drive activity lights.

Clearly we’re not yet able to talk about how well the Bulldog performs but from what we’ve seen of the general hardware layout, and what we know of Corsair’s liquid coolers, we’ve little reason to doubt the Bulldog won’t perform as it should.

We’re not totally won over by the styling so will be interested to see what Corsair does do for the final version. Nonetheless, with such a simple outer design it would be easy to mod this case to have a more conventional design – slap a slab of brushed aluminium on the front and you’re done.

Overall, we’re really looking forward to seeing just what the Bulldog can do when it arrives towards the end of the year.