What is the Copland DAC215?

The DAC15 is a high-end headphone amplifier with a DSD-ready DAC and valve-based amplification. It can also be used as a pre-amp in a full-on hi-fi system.

We talk a lot about the benefits of top-quality headphones, but if you’re still driving them through a cheap headphone amp or – heaven forbid – the socket on your phone or laptop, you’re never going to hear what they can really do.

The Copland DAC215 is a headphone amp that will definitely let your cans fulfil their potential.

There’s no denying the DAC215’s Danish roots. The amp oozes Scandinavian style – you know, if ooze could manage straight lines and minimalism.

The fascia is dominated by two large, handsome knobs – the left one for volume and the right to select your audio source. They look top-quality and they feel it, too. Keeping things symmetrical, the 1/4-inch headphone socket is on the far left and a circular on/off button is on the far right. 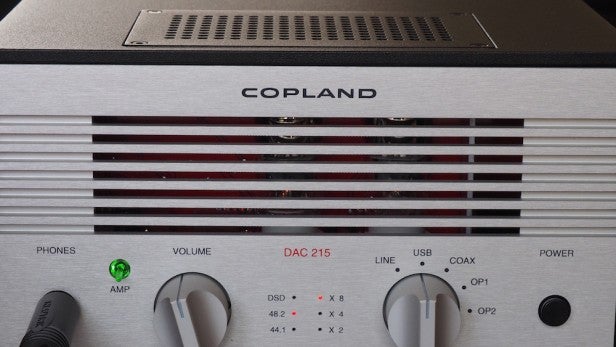 Alongside the headphone socket is a curious little LED-lit switch that toggles the amplification on or off, in the event that you want to use the DAC215 as a DAC and nothing else.

Between all of this you’ll find an array of LEDs for indicating the sample rates of digital files played through the DAC. 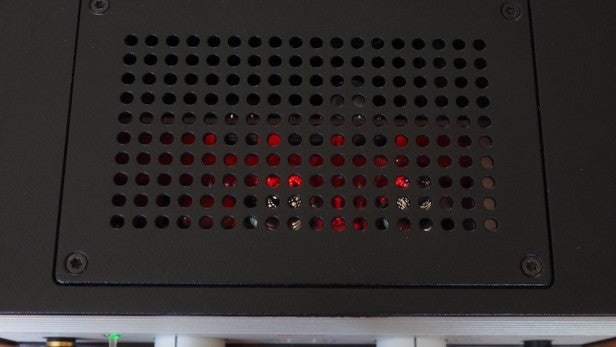 The front panel and the top of the casing both feature windows to the inner workings, so the mesmerising, glowing valves are clear to see, whether the DAC215 is mounted low down or up high. The valves are a pair of ECC88 double-triodes that appear to glow violently red, but that’s just an illusion caused by some red LEDs sitting behind them. Look a little closer and you’ll see a more familiar, subtle orange glow within the valves themselves.

Alongside that valve amplification is the highly regarded ESS Sabre 9018 DAC chip and an Amanero USB input board. 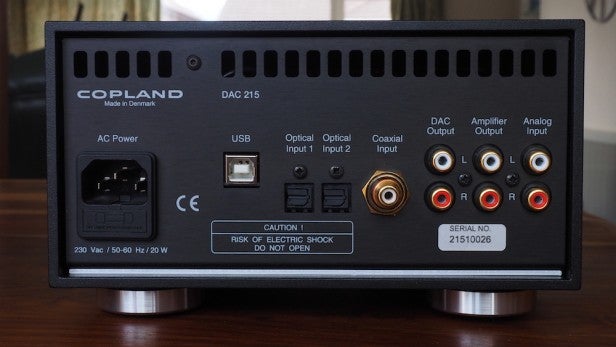 Around the back, connectivity is impressive. There are two optical inputs, a DSD-ready USB socket, an RCA phono input, a coaxial digital input and a pair of RCA phono outputs. One of the phono outputs is for outputting to a line input when using the Copland in DAC-only mode, while the other is for connection to a power amp when using the DAC215 as a pre-amp.

As a pre-amp, however, the DAC215 is a little limited. That single analogue input may be enough for some people, but the real killer is the lack of a remote control.

Most of my testing was done using a variety of digital files fed through USB to the Copland’s DAC. I also hooked it up to a Rega RP8/Apheta 2 turntable via a Leema Acoustics Elements Ultra phono stage to give the analogue input a run. Headphone duties were shared between the Audeze LCD-4 and Grado GS1000e.

You’ll need to download a device driver to get the DAC215 playing nice with a Windows PC, but I hooked up to a Mac and simply had to choose the new sound output option from my Settings menu.

My initial impression of the Copland was of effortless power. It has breathtaking scale and the mid-range warmth you’d expect from tube-based amplification.

It was definitely a better fit with the Grado cans than the Audezes, helping to reinforce the lower mids of the former. With the LCD-4, that touch of extra warmth seemed to compound the issue I have with their recessed upper mid-range. 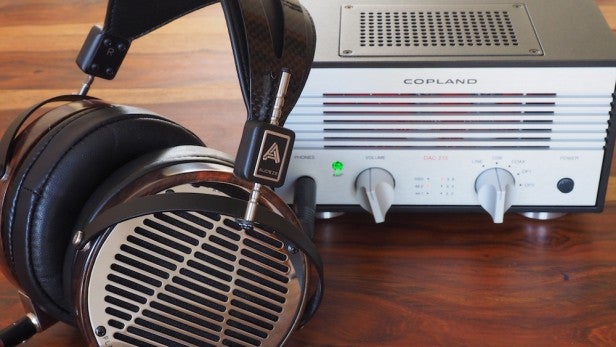 I settled first into something slow and easy – Gregory Alan Isakov’s This Empty Northern Hemisphere. The Copland’s easy musicality meant the hangdog-drawl vocals poured out as sweetly as a perfectly aged Bourbon. Songs with greater scale and majesty, such as “Master & A Hound” and the epic title track, gathered the momentum they deserve, washing over me like a wave without suffering the slightest loss of detail.

Moving on to the 24-bit/192kHz recordings of Mozart’s Piano Concertos No.12, 13 & 14 by Gottlieb Wallisch, the timbre of the piano sounded just sublime. The notes kept their definition and shimmer, even when the strings entered with gusto behind – although perhaps not with the stop-start precision offered by the Chord Hugo TT headphone amp. The Chord takes transient handling to a whole different level.

The same sonic traits revealed themselves with everything from Radiohead’s A Moon Shaped Pool and Massive Attack’s Mezzanine through Laura Marling’s Alas I Cannot Swim to Gustav Holst’s The Planets. It’s very musical and easy on the ear, without muddying instruments nor ditching detail.

Should I buy the Copland DAC215?

Purely as a DAC-equipped headphone amp, the DAC215 is exceptional. It has wonderful mid-range warmth, effortless power aplenty and tons of connectivity options. It also looks and feels great if, like me, you appreciate Scandinavian design.

It’s a far-from-ideal hi-fi pre-amp, though. There’s also no lack of awesome headphone-amplifying competition for just over £1,000, offering close to the Copland’s sound quality for considerably less cash. None of it does so with the same style and panache, however.

A sumptuous valve headphone amp with oodles of power and a pleasant dash of warmth.