We don’t often look at hard drive enclosures. Their inherent low price and perfunctory nature means there’s often not much to say. You plug the hard drive in, connect the enclosure to your PC and power the thing on. And, if it works, bobs your proverbial. However, every now and again, we see a little innovation that catches our eye, which is precisely what happened with the Coolermaster XCraft 360.


You see, your average hard drive enclosure requires some kind of dismantling, generally involving a screwdriver and a certain degree of cable manipulation, to add a hard drive to it. However, adding a drive to the Coolermaster XCraft 360 is a completely tool-less operation. Just pop it open and drop the drive in. This combined with connections for both USB 2.0 and eSATA and a sleek looking case design makes it look like a real winner. So, let’s take a closer look. 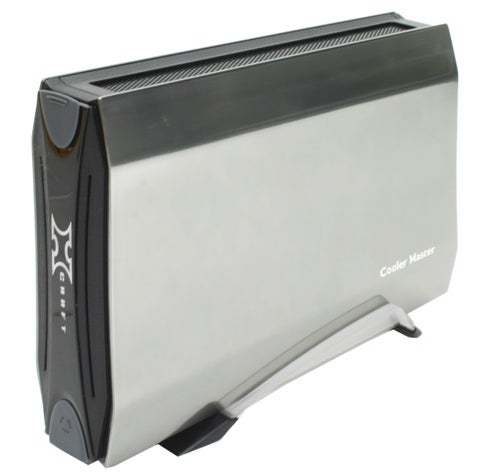 Predominantly made of stainless steel, the XCraft 360 has a reassuring weight and sturdiness to it that instils a sense that it will cope well with the trials of a (semi) portable life. The top and bottom panels are lightly brushed then coated in a layer of super smooth lacquer that gives them a beautiful sheen. A quick bit of abuse from a bunch of keys proved the lacquer is quite tough as well, so the finish should also stand the test of time. Just to make sure, though, four little rubber feet on the bottom stop the XCraft sliding around on your desk, further reducing the chance of scratches.


The sides have perforated panels running down them to provide a bit of ventilation for the roasty-toasty hard drive inside. However, there’s no fan to boost the cooling power if things do start to get too hot. Indeed, during out testing I checked the temperature of the outside of the enclosure then quickly whipped the drive out and checked its temperature and the drive was 10 degrees Celsius hotter than the enclosure. That said, the metal body of the case provides a substantial area to dissipate heat and the likelihood of the drive becoming critically hot are very slim.


Of course, the flip side of using a metal case with open grills is the complete lack of noise reduction. If you put a noisy hard drive in this, you’ll hear it in all its glory. If this is a major concern, you may be best opting for a so-called silent enclosure but these are likely to run hotter than the XCraft, which could lower the lifespan of the hard drive. 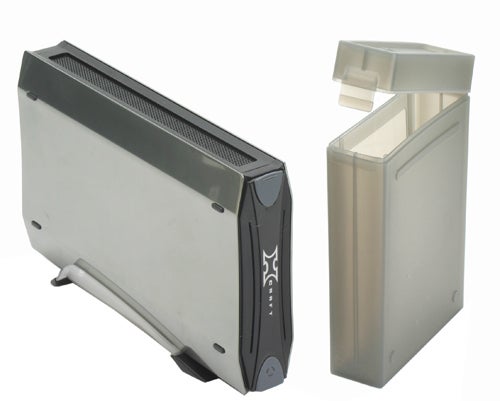 A small plastic stand is provided in case you want to stand the hard drive on its side – a move that in itself will help to cool the enclosure further. It’s a pretty simple plastic affair, with a couple of rubber feet that stop it slipping around, but it’s quite tough and does the job. A quick wobble test also showed it to be surprisingly stable despite its simplicity. In the box you also get both a USB cable and an eSATA cable, a little cloth for wiping off finger prints, and a small box to keep the other bits in.

Round the back you get connections for power, USB 2.0, and eSATA as well as a large power switch, all of which are clearly labelled. I did find the power cable kept falling out the first few times I used it, until I realised it needs a good shove to plug in properly, after which it seemed to cope. It’s worth noting, though, these connectors are standard for all 3.5in external hard drives so it’s a common problem.


The design of the front is a bit hit and miss and it doesn’t altogether tie-in with the sleek understated look of the rest of the enclosure. In particular, the XCraft logo has that kind of gamer-cool look that you associate with graphics card boxes and dodgy peripherals that are meant to transform even the clumsiest of us into uber fraggers. All well and good, if that’s what you’re into, but for the rest of us a plain front would’ve been fine. 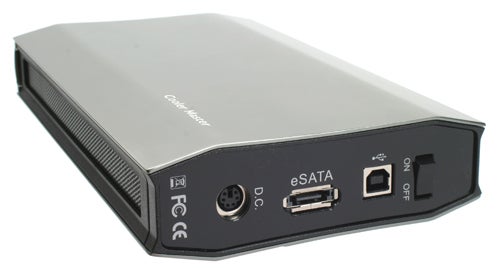 Two light grey plastic inserts are located on either end of the front. The one on the right houses the power and status indicators, which glow blue and pink, respectively, while the one on the left is a latch for the caddy door. Just a gentle squeeze enables the door to be opened ready to add or remove a drive, which of course is what makes this enclosure so special.


Adding a drive is a simple process of opening the door and sliding the drive in. It takes a fair push to close the door, as you’re simultaneously pushing the power and data pins into the connectors at the bottom of the caddy but it’s very easy to use. Even better though is the ease with which you can remove the drive. As you open the door a clever lever system activates an arm hidden inside the caddy that pushes the drive out ready for you to remove. It doesn’t sound that impressive on paper but when you see it in action it is really neat. 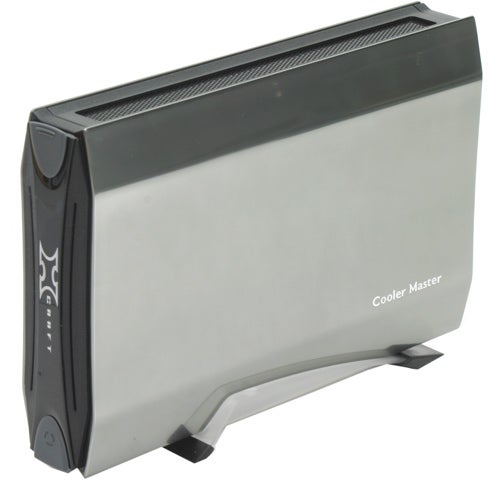 Also impressive was the performance of the enclosure. Using our standard set of file transfer tests, with a 250GB 7,200rpm Maxtor hard drive loaded into the enclosure, transferring the 1GB video file over USB was significantly faster than on our dedicated 400GB USB External hard drive. The results for the multiple photo test were less impressive but were still very close.


Moving to eSATA made things even faster with both the file transfer tests being completed nearly as fast as if the hard drive was connected directly to the computers onboard SATA ports. Of course, the performance of a hard drive enclosure is largely dependent on the hard drive inside it so your results may vary but from our tests there was no obvious bottleneck caused by the enclosure itself.


The CoolerMaster XCraft 360 is incredibly easy to use with its tool-less hard drive mechanism and, with good looks and decent performance, it makes for a great overall package. However, it is a little more expensive than your average hard drive caddy, and as such finds itself competing with more feature rich models. If you can find it a little cheaper, though, it’s definitely worth a go.