The last time I reviewed a tower case, I was disappointed that the aluminium used for its attractive front fascia wasn’t then also used for the rest of the chassis. Thankfully that’s not the case (excuse the pun) with the Praetorian 731 – one of the latest boxes from the PC builder’s favourite, Cooler Master.


Yes that’s correct. The entire shell is either machined or pressed from aluminium, a metal with properties that seem ideal for a PC case. Not only is it light, but in terms of thermal conductivity it’s some three to four times higher than that of steel. Obviously, this is an assessment of aluminium’s conductivity depending on the temperature gradient that exists across a certain thickness of aluminium and of course the quantity of heat that is transmitted. 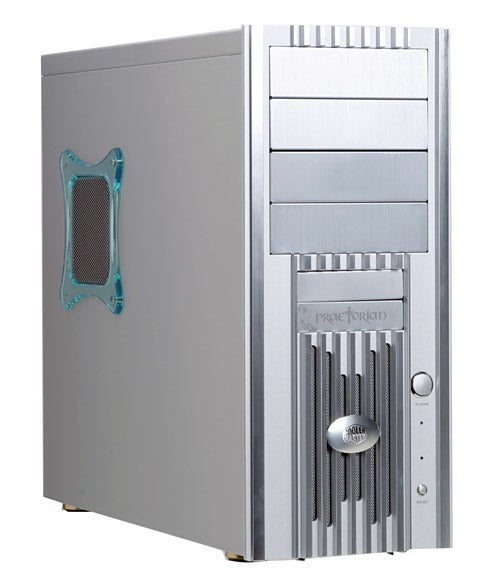 Although the suggestion here is that an aluminium case has three times the thermal conductivity of a steel one, the Praetorian 731’s variable surface areas and differing temperature gradients would make its thermal conductivity irregular, and probably not hugely different to that of a steel case. Remember it’s not a block of aluminium tested under controlled, steady state conditions.


Another thing that should be considered is that the case itself is not in direct contact with all the hot components that make up a PC. The heat will only be passed to the inner surfaces by the air inside, and we all know that air is a poor thermal conductor. That’s why some fanless aluminium cases, such as Zalman’s TNN 500A use heat pipes that are actually coupled to the case itself, in order to dissipate the heat. 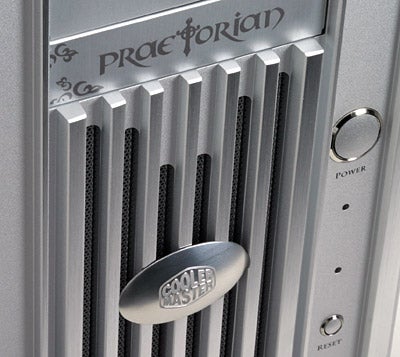 There is another strong argument for the use of aluminium – it looks good and when it’s finished in the way the Praetorian has been it looks doubly good. That brushed anodised surface gives it a real air of quality. However, as a fan of the company’s WaveMaster design, I’m not too sure about the almost gothic-like fluted frontage but taste is a very subjective matter, and I’m sure that many modders will dig it. And for those of you not fully versed in Roman history the name printed on one of the 3.5in bay covers refers to the elite legion of Roman troops known as the Praetorian Guard. The analogy? Their job was to protect the Emperor, and Colour Master likes to think this case will protect your components…

Moving on to the Praetorian’s features, one of its strengths has to be the removable motherboard tray. The tray, also made from aluminium, includes the expansion card frame allowing the majority of the build to be executed outside of the case chassis. In other words it’s an ideal solution for unhindered fitting of the motherboard, processor, heatsink, memory, and the expansion cards. Once everything is in place the tray can be slid back in and secured with four thumbscrews.


These thoughtful construction details conitue. For instance, the side panel has an integrated duct for channelling (hopefully) cooler external air to the fan and heatsink. Be warned that it may not sit directly over your processor socket depending on your motherboard’s layout, and for some monster heatsink and fan assemblies the duct may simply get in the way. If that’s the case it can be always be removed. I’m also not keen on the external, aquamarine coloured Perspex fitting that surrounds the duct’s vent. It could just be me, but it brings a certain tackiness to what is otherwise a professionally finished case.

All the Praetorian’s edges are either rounded or folded over to prevent injury. A welcomed touch, especially when I count my numerous scars, each one of them painful reminders of the PCs I’ve built using cases with sharp, poorly cut panels and struts. In addition, the threaded nuts at each screw hole are made from steel and either countersunk and/or bonded to the aluminium frame. Steel is preferable to aluminium as it’s less likely to cross thread.

While it’s certainly a fine case, there’s some room for improvement. First of all it comes with four blue-lit 80mm fans, two at the front and two at the rear. In operation, they are surprisingly quiet, but I’d still prefer two slower-spinning 120mm fans, one at each end, for even more peace. Furthermore, you’ll need four fan headers on your motherboard from which to power each fan (and to control their speeds if the motherboard supports that). However, many motherboards have three headers, so a split power lead like the one below will be needed to power the fourth fan.

There’s also the option to add a fifth fan. If you don’t need the I/O function panel with its press-open sprung lid, two USB2.0 ports, mic and headphone jacks, and one FireWire port, you can replace it with the supplied case fan. I’ve opted to leave the I/O panel in place as I want the extra ports, but I have to say I’m not too happy with its position. There’s nothing wrong with having it on top of the case, but for ease of access especially when it’s under my desk, I’d prefer to see it mounted toward the front of the chassis where I can actually see the ports. 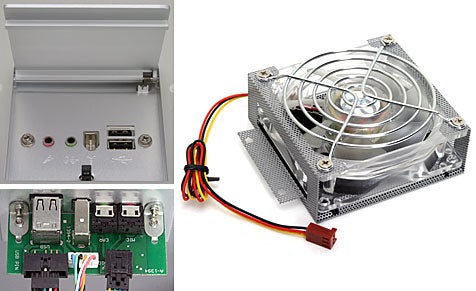 So what is it like to build? Well, there were some issues but overall it was a pleasant experience. The removable motherboard tray made fitting the main components easy, but the central positioning of the I/O panel meant that routing the cables to the headers on my motherboard was a little awkward. The Praetorian ships without a PSU, but fitting this is a doddle – attach the PSU backplate with four screws, slide it into its bay and then secure it with another four screws.


Installing the optical drives proved to be a little trickier. The topmost drive bay will only allow let you put screws in the lower holes on a drive. This is a bit odd, but it shouldn’t really make the drive any less secure. All the other drive bays give you access to all four screw holes on either side of the drive, but bear in mind that there are no supports when you initially slide the drives in. You would have noticed I mentioned screws. Sadly there are no quick release drive rails.

As for the final touches like routing the various cables, I found that I could actually tuck some of them down the right side behind the motherboard tray and the drive bay cages. With all the connections in place, I fired it up and was treated to the now ubiquitous blue glow eminating from the fans at both ends. The Praetorian is a tad noisy but I found that adequate temperatures were maintained with just one 80mm fan in operation at the front and back.


Overall, I’m impressed with the Praetorian 731’s build quality and finish – it may not be as curvaceous as its Wave Master stable mate but they both share the same popular layout. At £84.60 it’s not that cheap, but if you want an easy-to-build case that looks a little different then it’s certainly not a bad buy.


It’s quite pricey and there’s room for some small improvements, but on the whole the Cooler Master Praetorian 731 is a well made aluminium case that uses a tried and tested internal design.


”For a second opinion check out what the guys over at Bit-Tech think.”