Despite claims to this effect in our review of the Cooler Master NotePal P1, I’m not sure everyone has heard the story of the man who burnt his penis on a notebook that was particularly warm. In fact, I’m not even sure such a story exists outside the mind of the now sadly departed – from the TrustedReviews office – Spode. In any case what he was trying to convey was that notebooks get hot and while technology continues to decrease heat production and improve heat dissipation in notebooks, even the best designed notebooks will get pretty warm when under serious stress. 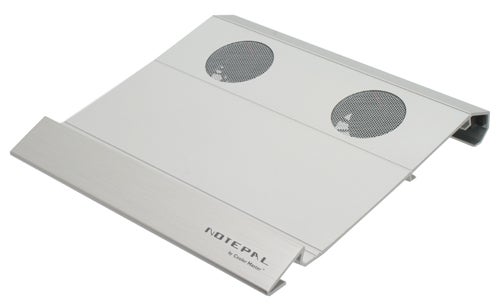 If this is the sort of thing that concerns you then there are plenty of options out there, and today we have another of Cooler Master’s solutions, the NotePal. This is the slightly more expensive of the two NotePal products, with the P1 which Spode reviewed costing around £18 compared to the £23 of this version. For the extra money though you do get a rather more complete product because whereas the NotePal P1 was essentially more of a wedge than a stand, the NotePal is a fully fledged stand that’ll hold your notebook securely in place while also keeping it cool.


The cooling is provided by two 70mm fans placed toward the back of the unit, around the area on a notebook normally taken up by the battery pack. These fans prevent the warm air created by the battery and other components from being trapped under the notebook, replacing that stale hot air with cooler air drawn from underneath the stand. This helps keep the underside of a notebook noticeably cooler to the touch, which should in the long run help the longevity of your notebook and help it remain stable during extensive use. The fact that the stand is constructed from aluminium also contributes to the cooling, since it conducts heat far more effectively than anything made out of plastic.

As with the NotePal P1, the fans are powered via a USB cable which can be connected to the notebook. You don’t lose that USB port altogether it’s replicated on the back of the stand, and it’s a proper USB 2.0 standard port so there’s no compromise on transfer speeds should that be a concern. This is a very convenient solution, though it would be nice to have the option of standard mains power; especially if you intend to keep the stand permanently in one place.

The benefits of the Cooler Master NotePal aren’t just in its cooling attributes though; it’s also a very effective stand which makes using a notebook for prolonged periods far more comfortable. It’s nicely angled to provide an optimal position for typing on the keyboard and viewing the screen, while a wrist rest helps makes typing all the more comfortable. Moreover, because the keyboard is sitting at a more natural angle it forces you to sit more upright in your seat, thus helping to avoid any of those nasty hereditary back problems that seem to affect so many. 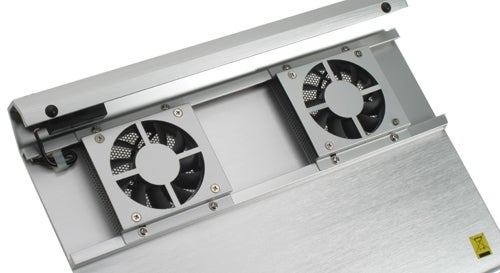 This, and the cooling benefits, make the NotePal the perfect accompaniment for a home office where space is at a premium. It makes using a notebook in such an environment far more comfortable, meaning you can work for longer, while also be safe in the knowledge that you’re notebook won’t go up in a plume of smoke because it hasn’t had a break in several days. The sleek design means the NotePal will easily fit into any surroundings, and if silver isn’t your thing there’s a black version too.


The only real question mark over the NotePal is in its size and capacity. Cooler Master claims that it should be able to hold notebooks up to 15.4 inches in size. However, a 14.1 inch notebook is, give or take a few millimetres, a perfect fit for the stand. A larger 15.4in notebook does fit as well, but there will most likely be some overhand at the sides.

It’s also worth pointing out that the aluminium finish, although very attractive and cool, is best avoided if your notebook has any kind of chrome or metal edges. It goes without saying that metal on metal isn’t a good combination, and together scratches are inevitable. Happily, this only really applies to a small minority of notebooks with the average workhorse laptop causing no such concerns.


Cooler Master has done a good job with the NotePal, creating a notebook stand and cooler that’s affordable, well made and does its job effectively.