Back in January, we had the chance to look at a cracking mid-range graphics card that was endorsed by no less than Jonathan “Fatal1ty” Wendel and called, appropriately enough, the XFX Fatal1ty 7600 GT. It was based on a heavily over-clocked GeForce 7600 GT and cooled by a completely silent passive heat sink, and it didn’t look half bad as well. However, at the time we didn’t have ATI’s price competitor for the 7600GT, the X1650XT, in our office so we couldn’t directly compare performance. Well, we’ve now got our hands on one and we’ve spent the last few days putting the X1650XT through its paces. So, is the X1650XT worth the wait or will nVidia still reign supreme at this price? Also, perhaps more importantly, will either be worth the upgrade now, given the likely release of DirectX10 compatible mid-range hardware within the next few months?


The particular board we’re looking at is manufactured by Connect3D, a UK based ATI board partner that has traditionally been associated with the budget end of the spectrum. Its boards will tend to be reference design with just a sticker on the HSF to distinguish them from the competition. The bundles are similarly very basic with no games and just the bare minimum of cables and connectors. This business strategy means the cards don’t tend to grab many headlines but they do give a lot of people what they actually want from a hardware manufacturer, namely their choice of graphics card at the cheapest price. We did, however, recently speak to Connect3D and it assured us it would be making more effort to vary its product range, by adding custom coolers and over-clocking cards straight out of the box, so we’ll be sure to get our hands on these products as soon as they become available. This X1650XT, though, is still a card from the old school as it were, with a reference board design and standard ATI Radeon X1650XT cooler. 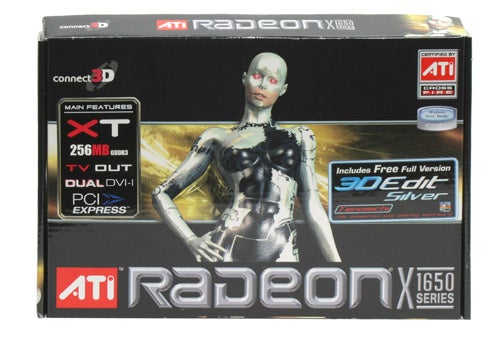 The board is packaged in a particularly small box and aside from an anti-static bag the card is only protected by a flimsy sheet of foam, so it’s going to struggle to protect your card from any serious falls in transit. One thing that did catch my eye, though, was a diagram on the back of the box that very adequately explains that to use the CrossFire capabilities of the card you will need to purchase an appropriate motherboard and another graphics card. It just struck me as particularly well explained.


The bundle consists of a driver CD, quick installation guide, two DVI-to-VGA adapters, an S-Video to Composite cable, and, a CrossFire link. This lot is everything you need to get going and nothing more, so no surprises here. The X1650XT includes the same internal CrossFire connectors we first saw on the X1950 Pro. They are a great improvement over the previous messy external cable based version so we’re happy to see these retained. 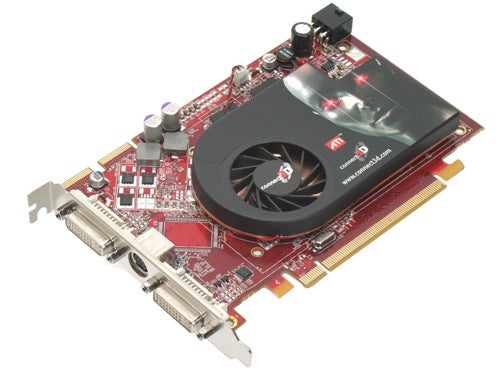 The card itself is quite small and should easily fit in all but low-profile cases. Along the top you can see the new internal CrossFire connector and on the back edge is the connector for the auxiliary six pin power connection. The cooler is a single slot solution that sucks air in from the side of the card and expels it out the back of the card and into the case. Re-circulating air from inside the case isn’t the ideal solution but without a dual slot cooler it’s the only alternative, so you’ll just need to make sure the rest of your case is well ventilated. Belying its looks, the cooler was actually quite quiet and didn’t rise above the general background noise in our office. However, it was noticeably warm during testing and we test on an open test bed, so you really will need to make sure there is a fresh supply of air being supplied to these cards. Either that or opt for a card that uses a dual slot cooler, like the ICEQ Turbo from HIS.

The X1650XT is built around the new RV560 core which is manufactured using an 80nm process and is clocked at 575MHz. This is coupled with 256MB of GDDR3 memory running at 675MHz (1,350MHz effectively) and connected over a 128-bit bus. Buried away within the core are eight vertex shaders, eight pixel pipelines (with 24 pixel shaders), and eight raster operation pipelines (ROPs). This is quite a step up from ATIs previous mid-range offering, the X1650 Pro (based on the RV530 core), which could only boast five vertex shaders, four pixel pipes (12 pixel shaders) and four ROPs. It’s also, at least on paper, significantly betters than the nVidia G73 core (on which the 7600 GT is based), which can only boast five vertex shaders, four pixel pipes (12 shaders), and eight ROPs. However, the Fatal1ty 7600 GT comes clocked at 650MHz with memory running at 800MHz (1600MHz effectively) so there’s a good chance it may outperform the X1650XT. 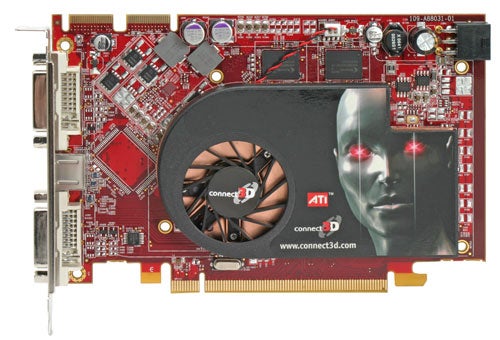 
I’ve recalled results from the Fatal1ty 7600 GT review to compare to, as well our reference 7600 GT results. Some results are missing due to different resolutions being used when we tested the cards but there are still enough results to get a good picture of performance. 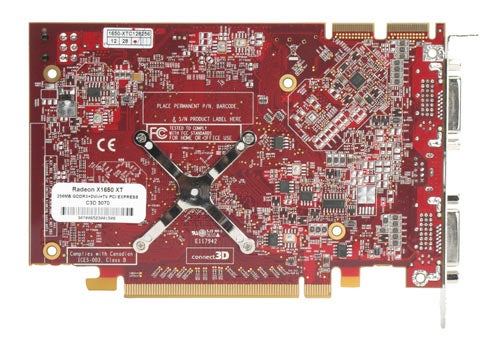 It is quite clear that the X1650 XT is a good match for the reference 7600 GT but it consistently falls behind the over-clocked version. The reference 7600 GT consistently starts out faster but drops away much more rapidly than the X1650XT, but even as you crank the AI the overclocked Fatal1ty always stays ahead. However, the Fatal1ty board does cost £20 more than either the X1650 XT or the standard clocked 7600s so you would expect it to have a performance advantage.


Visual quality is a factor and in this area the X1650 XT wins. The 7600 GT has always been plagued by poor texture filtering and has been trumped by the fact the X1000 series can perform AA with HDR lighting. However, at this level of speed it’s possibly a moot point. The X1650 XT isn’t really fast enough to run HDR and AA together, unless you drop resolutions heavily, which isn’t what you want to do if you have an LCD display.


Also of note is the inclusion of dual dual-link, HDCP compliant, DVI-I ports on the X1650 XT that mean you can run protected HD content on two massive 30inch monitors all off the one card. Most 7600s only feature at most one dual-link DVI-I link port and HDCP compliance is also variable.


In terms of raw performance the X1650 XT is a very worthy competitor to the 7600 GT and given its better texture filtering, its ability to process both HDR and AA simultaneously, and it’s better connectivity options, I’d say it’s the better choice of the two.


However, unless you’re totally desperate I’d hold out for a couple of months until mid-range DX10 hardware is released. At the very least this will cause the price of these cards to drop.