Convergence in technology is a wonderful thing. It allows you to use your monitor as a TV, MP3 player as games console or even camera as media player. In the case of Compro’s VideoMate W800F Hybrid TVFM box, it allows you to watch digital or analogue TV and preloaded films on any PC monitor at up to 1080i, as well as listening to FM radio or MP3 music and even play a game or two. Compro’s packaging brings back bad memories of the rather poor AVerMedia AVerTV Hybrid STB, from its colour scheme to the ‘creative’ use of English grammar, but this alone isn’t enough to dismiss it. 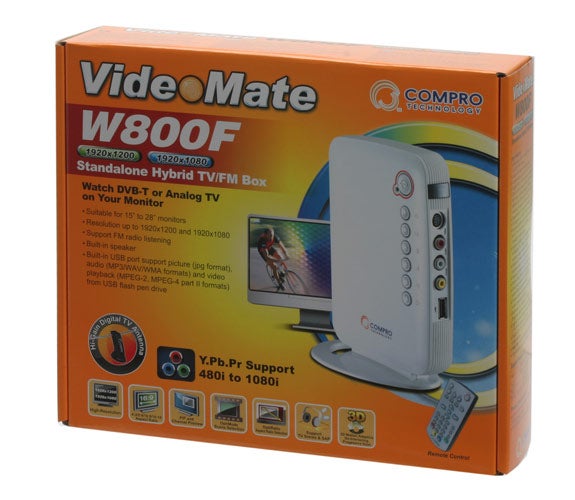 Together with the W800F unit, you get a small plastic stand, remote control with batteries, power adapter and user guide. Cables consist of one nine-pin Mini-DIN to VGA and one to component/S-Video, a 3.5mm audio cable and an FM antenna. There’s also an above-par (for this kind of product) digital TV antenna, with two metal aerials on a black plastic stand with a broad felted base.


In a world of black AV gear the VideoMate W800F unit itself is quite distinctive by sporting a lacquered-white finish. As with all glossy devices it picks up fingerprints like a monkey picks up bananas and there’s no cleaning cloth provided, but thanks to the remote you shouldn’t need to touch it too often. 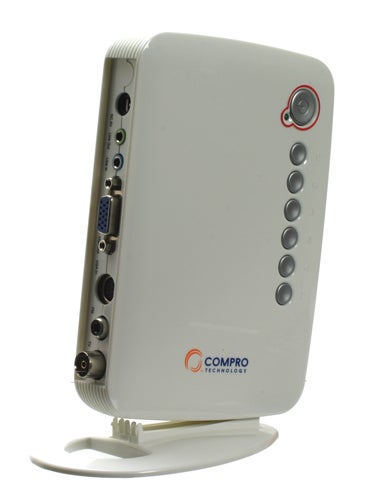 At 15 x 11 x 2.5cm it’s slightly smaller than an external desktop drive and weighs just 283g with its stand, which can be securely attached using a hook and clip system. Though in theory the unit can be placed either horizontally or vertically, inexplicably its own rubber feet are recessed further than the slightly-curved side they’re on, so using the stand is the only way to get it standing stably and being sure to avoid scratches.


Build quality is good, with the VideoMate W800F’s thick plastic displaying no sign of flex or creak. Though it doesn’t fit in too well with the white shell, at least the matte silver finish on the unit’s buttons makes them easily distinguishable and doesn’t pick up fingerprints. Its buttons are large and concave, which combined with crisp feedback makes them easy to use. 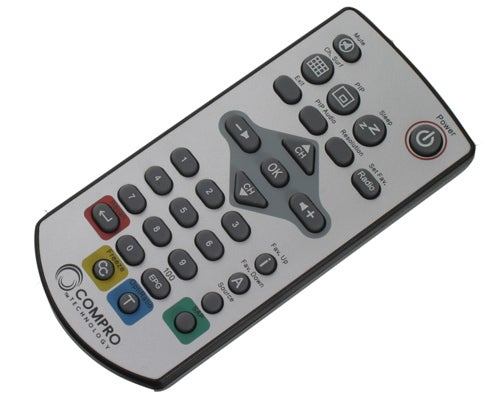 Most of the time, however, you’ll be using the remote, which runs off two AA batteries so you can use rechargeable ones. As with the AVerMedia AVerTV Hybrid STB, though, the remote doesn’t match the device at all, sporting a combination of matte black and grey. It’s quite light and comfortable in the hand, and though the buttons are a bit flimsy, their logical layout and distinctive shapes do make them easy to use.


The remote’s limited range (you have to be within about three metres of the main unit for it to work) is forgivable, considering the VideoMate W800F is recommended for use with a maximum 26in monitor, which you’ll probably want to sit fairly close to anyway.

Getting back to the W800F itself, it has quite a bit of connectivity, though none of it digital. At the back starting from the top (when it’s placed in its upright position) we have the power jack and 3.5mm audio in and out jacks. Next are video connections consisting of VGA-out for hooking up to a monitor, and a nine-pin mini-DIN to input VGA from your video card using the supplied cable. Below these are the antenna jacks for an FM and DVB-T/Analog TV.


At the front we have an IR sensor, nine-pin mini-DIN-out for use with the ‘component’/S-Video cable, and composite video and audio jacks. The last and most interesting addition to this list is a USB port. Though it doesn’t support external hard drives, the W800F will take a memory stick to view photos, watch films or listen to music. Unfortunately, though, format support is limited to the bare minimum, with JPEG for pictures, MPEG-2 and 4 video support, and music restricted to MP3, WAV and WMA.


There’s also a built-in mono speaker, which doesn’t do too badly for a tiny mono effort and can be used to watch daytime TV at a pinch – though anyone with a pair of headphones or external speakers will definitely want to use those instead. It’s also hardly surprising, but worth keeping in mind, that the W800F suffers from mobile phone interference.

Compro even provides a few pre-installed games. These are as basic as it gets, but though Hit-Rat (don’t ask) is terrible the Tetris and Brick-pusher clones are mildly entertaining.


With the main features out of the way, how does it actually perform? Well, the short answer is disappointingly. Though fairly logically laid out, menus can be a pain to navigate due to unintuitive or even obscure button assignments.


Extensive as it is, the manual isn’t particularly helpful either. For example, under the section called ‘Play Games’, all it says is “VideoMate W800F built-in 3 games (…) you can follow the direction and play it anytime”. Erm, what direction, exactly? Only if you’re lucky enough to have read the section of ‘Digital TV and USB Playback’ will you realize that, as with media playback, games only work when in Digital TV (DTV) mode.

These annoyances continue and though none of them make the W800F unusable, taken together they amount to a frustrating experience. To give a last example, when you enter the OSD under DTV, a small window shows what you were watching while you make adjustments. This is a nice feature, except that the volume controls don’t work anymore because they do double duty as navigation buttons. Fair enough, but the dedicated mute button has also been disabled, which is unnecessary and can be very annoying. 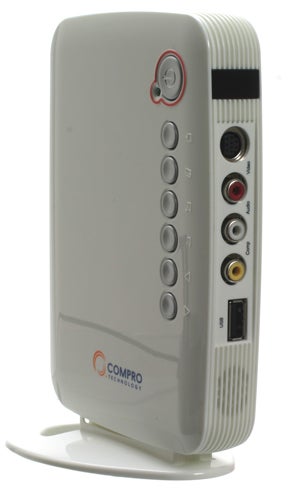 Image quality is another problem. When receiving analogue TV, images are uniformly bad, with lots of noise. Of course, anyone who has a choice in the matter will be using digital, but that also has its share of problems. While the output is watchable in terms of noise and scaling, colours are hideously oversaturated.


Admittedly this was also the case with analogue, but at least there it could be easily corrected by lowering the saturation setting – whereas in digital mode saturation was already at its minimum. Consequently, garish colours were also a problem for material played back off the USB drive, which means watching films using the W800F is pretty much a no-no.

As far as music playback is concerned, the VideoMate W800F claims compatibility with WMA, but failed to even recognise our WMA test files. MP3s worked, but having to turn the monitor on in addition to the awkward controls and slightly noisy output mean you’re honestly better off using any MP3 player.


Using the W800F as an image viewer is also out of the question unless all your photos are a small file size. If you try to view high-resolution shots it’ll take ages for the device to draw them to the screen. 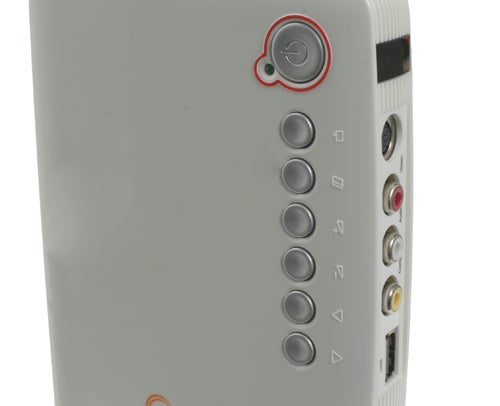 Unfortunately a firmware update didn’t provide any solace either, since Compro currently offers only a Beta update that only affects subtitles. Basically, FM radio is about the only secondary function Compro’s unit performs well. Of course its primary use is as a tuner and it does this well enough for undemanding viewers, but the final nail in its coffin is that at around £74 online, the W800F isn’t particularly good value for money either.


A classical case of Jack of all trades, master of none, Compro’s VideoMate Hybrid TVFM W800F mostly does what it says on the box, but does none of it well enough to really appeal. Only those who aren’t that fussy about the quality of their TV viewing and have no more than a passing interest in its other functions need apply.