TV tuners are the unsung heroes of Media Center PCs. While Blu-ray drives, video cards, and low power CPUs may grab all the headlines, if you’re after a true all-in-one multimedia PC the core to your system is the TV card. After all, playing downloaded videos, flicking through your photos and listening to your music collection are all good reasons to make a media centre but it’s not until you’ve added TV that your multimedia experience is truly complete.


Moreover, a few years ago, just having one analogue tuner was enough to keep us happy, but with the advent of Sky+ and dedicated Freeview Personal Video Recorders (PVR) we now demand the ability to not just tune-in to digital TV but watch one channel while recording another. It is for this reason that dual digital tuners have become the must have for the fully-fledged media centre. 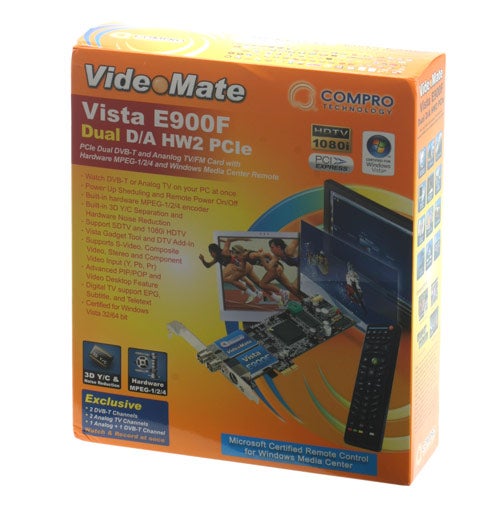 So, knowing the importance of having TV capability, what’s the best way to get it? Well, for a start you can choose between either a TV tuner card (either PCI or PCI-Express) or a USB device. There’s little reason to choose one over another but considering your media centre is likely to be a fairly permanent system once it’s all setup, you may as well go for an internal card to keep things tidy.


Having chosen to use a card, you now need to decide whether to opt for two separate cards or a single card that incorporates two tuners. Again, while it matters little which you go for, you might as well opt for the simplest solution, which would be the single card. In other words, if you’re looking to add TV functionality to your PC/media centre, you’ll probably want a card like the one I’m looking at today, the Compro VideoMate E900F. 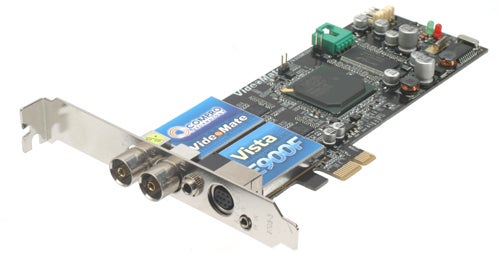 As well as boasting dual digital tuners, this PCI-Express x1 card also picks up analogue transmissions so you can theoretically choose between having two digital tuners, one digital and one analogue, and two analogue tuners. There is a problem though – Windows Media Center doesn’t support the use of two different types of tuner at once. So you must opt for either two digital or two analogue tuners – not, I’m guessing, that this should be of too much concern to most people. The accompanying software does support the simultaneous use of both analogue and digital but, as we’ll see later, using Compro’s software is something you’ll want to avoid.


On the back of the card, there are also inputs for receiving video signals from S-video, composite, and component video sources, so you could use this card to record digital copies of your old VHS tapes, for instance. There’s also a mini-jack for the remote receiver, another mini-jack for the radio signal and two aerial sockets. 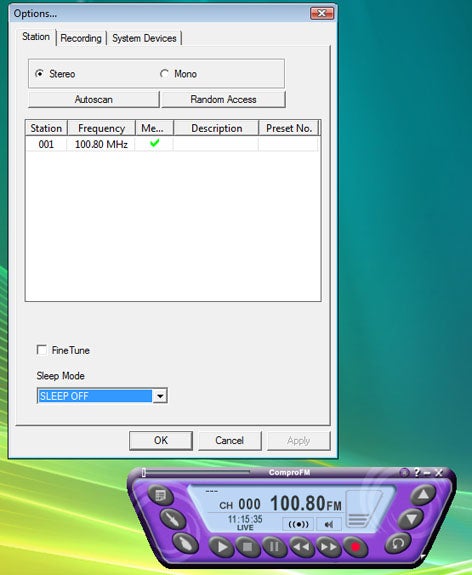 On top of its TV tuner functionality you also get an FM tuner, though we found that Windows Vista Media Center didn’t recognise this so you were again left using the crummy included software to listen in. Not only this but reception was unimpressive to say the least with us only just managing to pick up four stations. Admittedly the radio reception in our office isn’t great but this was well below what we’d normally expect.

In the box you get the card, a driver disc, a copy of Ulead DVD MovieFactory 5 SE (for turning those VHS tapes you’ve just recorded into DVDs), a dongle for the extra video inputs, an FM aerial, a low profile plate, a remote, an Aux-Out audio cable for use with PCs that don’t support digital audio, and a power-switch cable that’s required to make the remote turn the PC on and off properly.


Basic installation of the card is very simple; you plug the card in, turn on the PC and install the drivers. If you just want to use Window’s inbuilt Media Center software then that’s it. If you don’t, then it’s just a case of installing the VideoMate software. If, however, you want to use the remote and have it turn off/on the PC properly then things are a little more complicated… 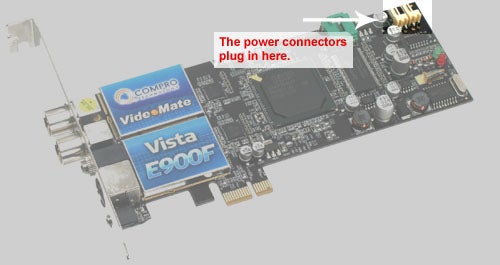 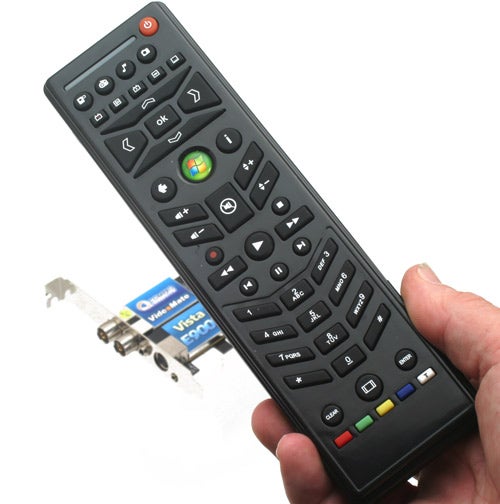 As for the remote itself, it’s a typical copy of the official Windows Media Center remote that does absolutely nothing to distinguish itself from any other we’ve seen included with kit like this. While it does work perfectly well, if you do plan to use this tuner card with Windows Media Center, we’d advise you buy the official remote as well. It looks nicer, is better built, and doesn’t require messing around with your power switches – it just works through USB.


When we first installed the card we also thought it wasn’t working properly or that it didn’t support simultaneous use of its tuners. However, after a quick investigation we realised that this was because we hadn’t attached a second aerial for the second tuner (I’d mistakenly assumed the second aerial socket was for a radio antenna). This was quite baffling as for a couple of years I’ve had a dual digital tuner card that uses a single aerial input for both tuners. For this newer card to use two seems like an odd step back. Compro has informed us that the retail version of this card does actually come with a one-to-two aerial splitter so you at least you’re ready to go straight out the box.


Once this obstacle was overcome the card worked perfectly, picking up over 70 channels on Vista Media Center. We could happily record one channel while watching another and (possibly because of the very fast test rig we’d installed the card in) changing channels was near instantaneous. Image quality was also very good. 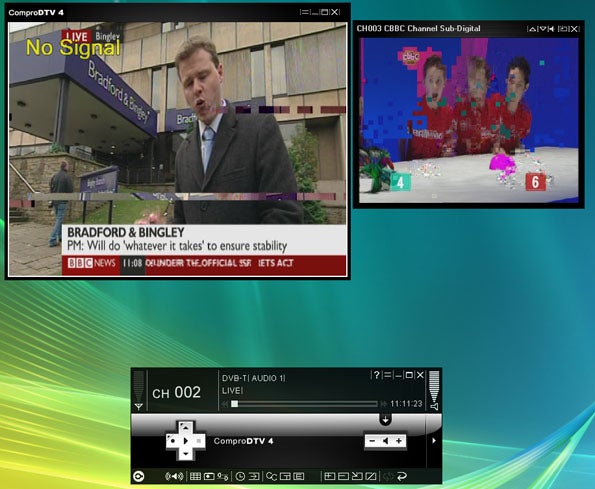 Aware that not everyone will just use this card as a tuner for the inbuilt Windows Media Center software, we also tried the included software and were flabbergasted to see it could only detect four channels. On top of this the interface is clunky and unintuitive, slow, and generally unpleasant to the point that we’d advise you to avoid it at all costs. Essentially, if you don’t want to use Windows Media Center, you’ll have to buy some decent TV software like SageTV. 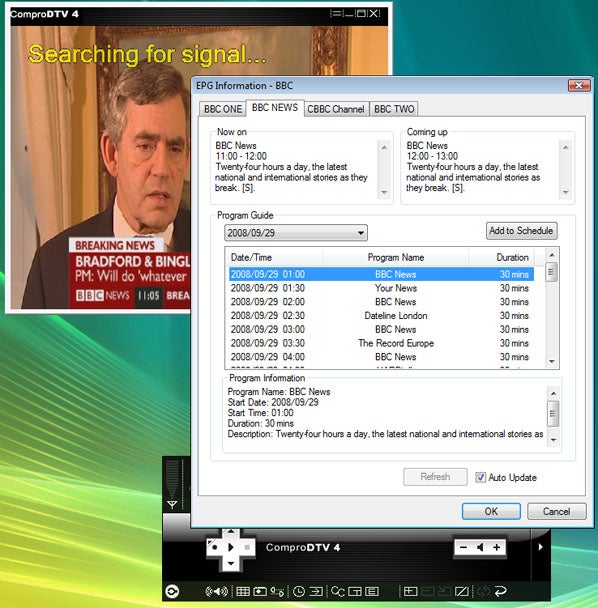 
The Compro VideoMate E900F does a perfectly decent job as a basic dual TV tuner card and while the remote makes for a reasonable alternative to the official Windows Media Center one, we’d still rather use the latter for setup simplicity. The extra video connections could come in handy, too, and with some decent software the radio may also appeal to some. However, if all you want is a dedicated dual digital tuner for your media centre then there are simpler, cheaper alternatives like the Hauppauge Nova-T 500.