Though you might be more familiar with Compro as a company that does TV tuners, it also provides a wide range of IP network cameras for remote monitoring and surveillance, from the relatively low-end IP55 all the way to the semi-professional IP540. Today we’re looking at the IP70, which resides at the high end of the home and small business range. 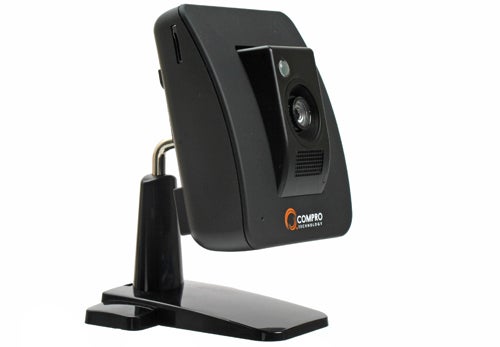 While lacking premium features such as a motorized stand or optical zoom, the £88 IP70 nevertheless carries a reasonably impressive specification, including an IR lamp for night-time viewing, motion detection, two-way audio and dual video output streams. It also offers remote monitoring through a variety of web browsers, including mobile ones so you can check things out using your phone. In other words, when covering a small room or a fixed angle, the IP70 should be more than capable of ensuring that your belongings are safe while you’re away – or that if they do get stolen, at least you’ll have caught the crooks ‘on tape’.


Inside the IP camera’s compact box you’ll find three mounting screws with wall-plugs, a software installation CD, and fairly comprehensive yet thin manual. The provided Ethernet cable is probably too short to be useful in the majority of situations, but not only are longer cables cheap and plentiful, the IP70 has an angled, adjustable USB port for an optional Wi-Fi N wireless dongle. The 5V power adapter’s cable is also a tad on the short side, but again it’s not too difficult to extend this. 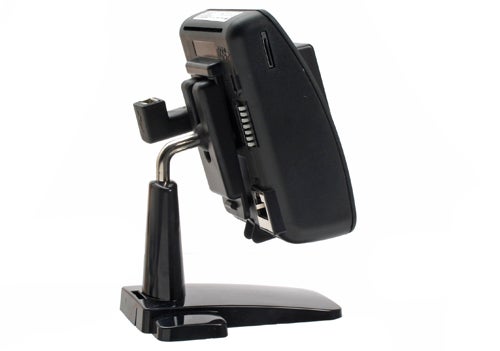 The actual camera is a neat and not unattractive affair, going for the ever fashionable black on black look with a glossy stand and matt black body and a nice soft-touch front panel. It’s certainly a lot better looking than the Xvision XIP3001, if not quite up to the sealed cuteness of the Axis P3301. Adjustability is good thanks to the stand’s ball-and-socket hinge, which offers effortlessly smooth tilt and pivot in virtually any direction, yet is sturdy enough to keep the camera in the position you put it in.


Build quality is likewise impressive. The IP70’s leg is thick metal and its base is reinforced with a removable metal mounting plate. The plastics used in the camera’s construction are invariably solid, with not a hint of creak or flex to be found. Being an indoor device it lacks any kind of weather sealing, but we would say the IP70 is rugged enough to cope with some rough adjustments and most things you – or an irate burglar – might throw at it.

At the device’s front, a proud section holds the light and camera sensors with IR lamp for video, while a fairly large speaker and pinhole microphone take care of audio. A small LED indicator glows blue to indicate a good network connection and flashes red if it can’t connect, but in case you think it’s too obtrusive or draws attention, duct tape is not required as you can switch it off permanently. 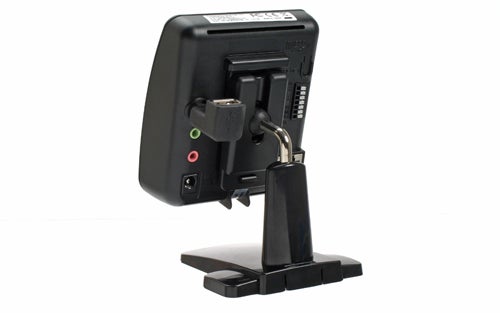 Around the back we have the aforementioned USB connector on its own slightly adjustable metal arm, 3.5mm audio and microphone jacks, an Ethernet port and an I/O port. There’s a carefully indented reset button that takes some effort to press, and a MicroSD card slot if you wish to record to network-accessible internal storage, saving potentially precious bandwidth. The camera itself uses a 1/3in CMOS sensor and a fixed 4mm (32mm equivalent) f1.5 lens.


Installing the accompanying ComproView software is quite easy. After you’ve entered the default user name and password (found in the manual, these can be changed later) you are led through a reasonably quick and intuitive installation process. The only quirk worth mentioning is a video quality selection page where the description claims M-JPEG will give you the best quality, but the only choices are MPEG-4 or H.246. The camera can run at up to 30 frames per second at a maximum resolution of 640 x 480 (VGA), and upping this to 1,280 x 1,024 lowers the maximum frame rate to 15.

You also select when to begin recording: the IP70 offers a choice between constant, time-based (where you can set a date, start/stop time and intervals) and event-based. Events range from several types of detection including motion, scene (if there are changes within the camera’s range of vision), object (when an object is taken outside of the camera’s range), face (looks for human faces, whether moving or still) and audio (when the microphone picks up “suspicious” noise). Of course you can also select where to store recordings, and you have a choice of any storage connected to the network.


ComproView features a straightforward interface, though adjusting settings post-quick setup can be a tad unintuitive. The software allows you to monitor up to 16 cameras at once, which is good for easily monitoring a multitude of streams though the views are too small to make out any fine detail. Moreover, consumers who’ve opted for the IP70 probably wouldn’t be getting more than four cameras. Multiple video streams and two-way audio communication from a single camera complete the generous feature set. 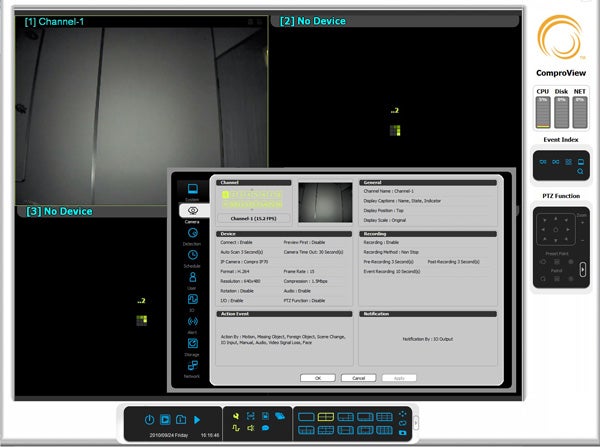 Remote (or local) viewing through a web browser was not as straightforward for us. Originally designed to work with Internet Explorer, our test with version eight was mostly unsuccessful: we could get snapshots through the camera but for its live video feed the software kept “connecting” without ever showing an image. Other browsers are supported through the VLC plugin, but at least in Firefox’s case this is not compatible beyond the ‘ancient’ version 3.5, so anyone with an updated Mozilla browser is out of the game. Unfortunately we didn’t get a chance to test the device with an iPhone or Blackberry, both of which it specifically claims to support.


Other problems with the IP70 included confusing firmware updates and remote viewing setup guides, showing older interfaces or not explaining what software they were referring to, which is especially frustrating for less tech-savvy users.

Video quality with the IP70 was a bit of a mixed bag. On the negatives side, even at its highest resolution sharpness is only okay and more pressing is the very poor colour accuracy with everything looking very washed out even in good lighting. Such criticisms are fairly typical for IP cameras but it’s still a shame to see quality hasn’t improved. This is all the more annoying as webcams like the Microsoft Lifecam Cinema are perfectly capable of producing far better image quality and cost only £50. 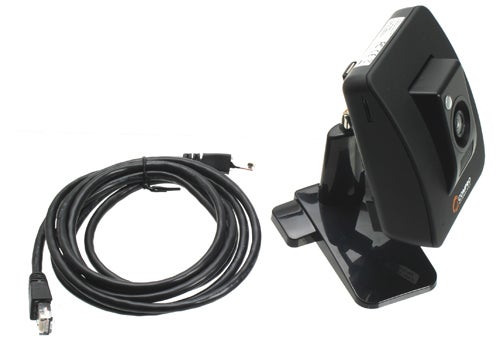 It’s not without its redeeming points, however. It dealt well with fast motion, displaying none of the blurring that plagues many webcams. Thanks to its infra red light array and sensor it also did an admirable job of showing plenty of detail of subjects in a completely dark room. Both are important qualities for an IP camera.


Unfortunately, audio is far from impressive. The pinhole microphone performed averagely at picking up background sounds, but as there is no filtering this is accompanied by lots of distracting noise, including a slight but audible constant hiss (though this is eliminated with the use of a dedicated external microphone). As with video, there is a noticeable delay of around a second, though that’s not necessarily detrimental to the IP70’s intended usage. Output through the device’s speaker was sufficient to get the message across, but any attempts to recreate Andy Dufresne’s antics will probably fall very flat. 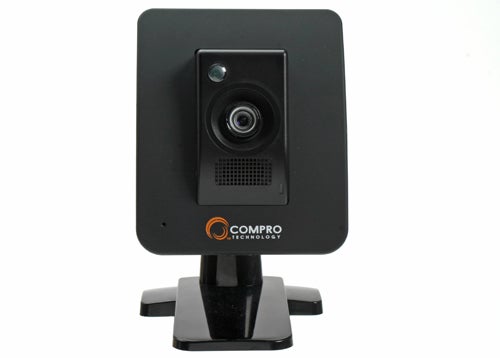 Overall then, Compro’s IP70 is a difficult product to quantify. On the one hand it offers connectivity, adjustability, features and build quality that belie its sub-£90 price, throwing in excellent motion and night-time performance. On the other, its software is versatile but outdated and not always user friendly, its user guides occasionally indecipherable, and its audio and video quality is only adequate at best. In the end it depends on what you require from it: to an extent you get what you pay for, and if you’re on a tight budget or within limited parameters it should be a decent solution.


Compro Technology’s IP70 Network Camera doesn’t set new standards in audio and video quality, nor does it offer every bell and whistle. However, if all you want is a basic indoor IP camera that offers night vision and two-way audio, it is competitively priced.