Recently, we looked at the Seagate 160GB Portable External Hard Drive – a laptop hard drive powered over USB. While it impressed enough to earn a 9/10 rating, what it lacked was software to enable it to be used as a comprehensive backup solution. This is where something like the ABS Plus from CMSproducts comes in.

Billed as an automatic backup system, the ABSplus (do you see what they did there…?) is essentially a USB hard drive bundled with CMSproducts BounceBack backup software and copy2go multimedia organisation software. The hardware and software aren’t dependent on each other so if you outgrow the supplied hard drive you can just buy a new one and continue to use the software. The drive I’m looking at today is a mere 40GB but they’re available all the way up to 160GB.


The unit comes well packaged in a good sized – almost oversized – box. Included are two CDs one of which contains the backup software and the other is a rescue disc, which enables you to recover your local hard disc from your backup.


Also included are two cables; one is a standard USB cable, the other is a USB to 3.5mm barrel connector cable that can be used to provide extra power to the drive should the one USB port not provide enough. 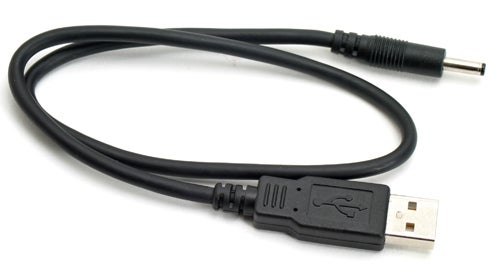 The drive itself is a very bland looking affair with a matte silver body and a white plastic back plate that just emanates cheapness. Don’t get me wrong, no ugly sticks were used in its making but it certainly won’t be winning any beauty contests either. It’s bland but functional. A single blue LED indicates both power and hard drive activity, flashing off and on in accordance with the latter.


Physical installation couldn’t be easier – just plug in and wait for your operating system to recognise the drive. You can, of course, format/partition the disc any way you want, for general use, but to use the included software you will need to have it formatted in a Windows recognised format. 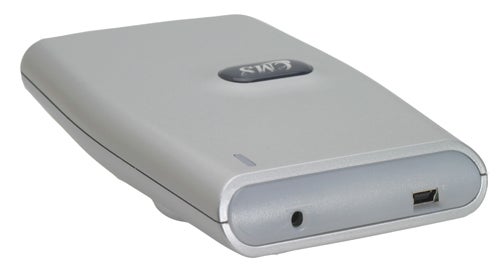 I tested the drive for raw speed by copying a single 3.66GB file and a folder of 250 photos of mixed sizes, totalling 716MB, to and from the disc.

BounceBack is a complete backup solution which includes scheduling, synchronisation, and, bootable backup recovery. However, it does lack compression or encryption so if security is a concern this package is not for you. Looking on the CMS website it appears there is an enterprise version which includes these features. Unfortunately though, it retails for $139 and there doesn’t seem to be any obvious upgrade path. This seems strange as there are many alternatives from other vendors that offer some form of compression/encryption for as little as $30.


Another sign of this product’s low cost inclination is evident when you insert the software CD – there’s a spelling mistake on the autoplay popup! Now, I could forgive this if it were buried somewhere in the FAQ but being the first thing you see, it’s just woeful. Spelling mistakes aside, installation is very easy and I was ready to start protecting my data in no time. 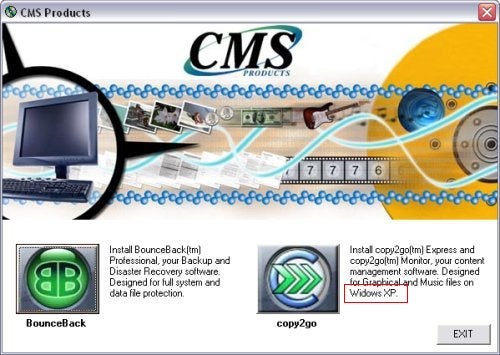 CMS have chosen to forgo the standard Windows interface and have gone for the big flashy buttons type instead. I’m not generally a fan of these sorts of interfaces but for such a simple product I can at least see the logic in CMSs decision. Unfortunately, poor execution has once again let the product down. From the layout of the Control Center you’d expect the top five buttons to act like tabs (or radio buttons) so that you can just click from one to the other and the screen in the centre just flips between the options. However, if you click one tab and then select a different one, a popup appears telling you that all unsaved information will be lost if you chose to continue. This is just crude and makes the whole process unwieldy. I could go on but there are so many little annoyances I’d be here all day so I’ll just move onto what the software can do.


You can choose to backup your whole system, your My Documents folder, or individual files, and once backed up the files are accessible just like normal files. A full system backup will require the destination disk to be repartitioned and formatted. Then, if you have a local disc failure, you can use the rescue disc to restore your full backup to a new drive. 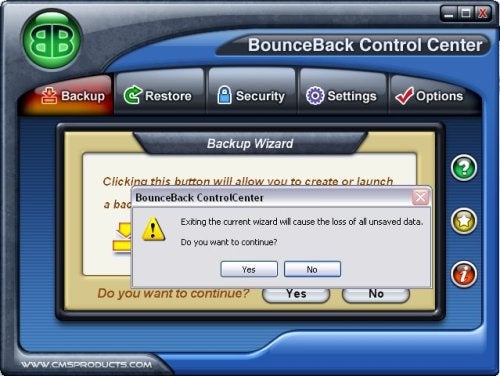 It was whilst trying this feature that my opinion of this product really took a turn for the worst. Using a spare laptop, I created a full backup then set about trying to restore it. Unfortunately, the rescue disk, which uses a Linux distro based on the Fedora kernel, didn’t recognise the laptop’s internal hard drive so, to check whether this was a common problem, I connected the backup drive to my working computer and ran through the rescue process to see what would happen. Well, I certainly found out! Without warning the restore facility kicked in and set about deleting my computer’s partitions and restoring the laptop’s backup. By the time I realised what was happening, it was too late. My PC’s Windows installation was no more. Suffice to say, I wasn’t happy. At the very least the program should have asked me via a dialogue box, before going ahead and messing with my hard disk.


In fairness, once I’d calmed down, I tested the feature again and it did work and put the laptop’s image onto my PC.


The restore function, accessed through the BounceBack Control Center, enables you to browse through your files and select which ones you want to restore. You can also purge your backup; this deletes files in the backup that are no longer present on your local hard disk.


The Security tab enables you to password your backup drive. This will completely lock the device – it’s not even visible through explorer – until it’s unlocked using the rescue disk. I can’t see much of a use for this but at least there is some form of security for your data if you require it.


The last major feature of BounceBack is the ability to schedule backups. You can choose between daily and monthly periods and you simply select what time you would like the backup to be performed.


Also included in the package is copy2go – a multimedia organising and backup program. Basically it searches you local hard disks for pictures, music, and, video and provides a simple interface for quickly backing them up. This is one of that new wave of products that looks to organise your files independent of the folder structure, like Google’s Picasa. This software is very simple but did work and was very intuitive to use. 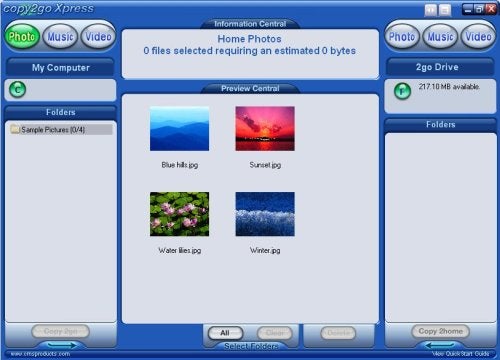 The two pieces of software bought directly would set you back $98 (~£49). A 40GB portable hard drive, like the one included, can be found for around £60. So, I can surmise that you’re paying a £15 premium for having everything in one box. Well, call me hard to please but, if anything, I would expect to pay slightly less for buying everything from one company – its called incentivising the customer.


As you may have guessed, the ABSplus fell well short of my expectations. Once you figure out the software, the product does become useable. However, the price would have to be dropped by £20, before I would recommend it, and then only tentatively. As it is though, this is a product I would avoid.