What is the Clint Freya?

In Norse mythology, the goddess Freya is known as something of a party girl, making it a fitting name for this funky Wi-Fi multiroom speaker from Danish brand Clint Digital. You can place up to four of them in different rooms around the house and use Clint’s Asgard smartphone app to send music to all of them – perfect for when you’re entertaining.

It supports AirPlay, DLNA, Spotify Connect and internet radio, and thanks to the built-in rechargeable battery it’s fully portable, so you’re not tied down to a power supply.

Freya is the smaller of two Wi-Fi speakers in Clint’s Asgard product series, sitting below the larger Odin speaker which we awarded 9/10. A Bluetooth-only version is also available for around £46 less. 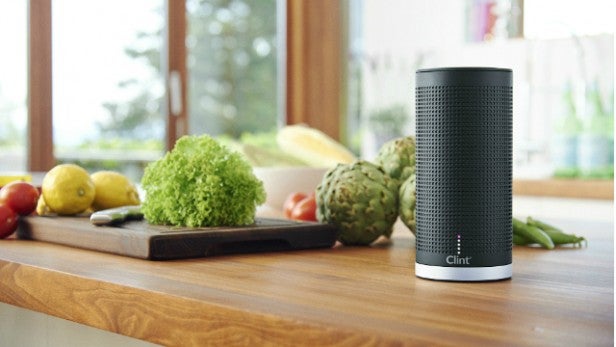 Like its big brother (or, more accurately, husband), Freya boasts a
quintessentially Scandinavian design with clean, minimal styling. Its eye-catching cylindrical enclosure is finished in charcoal grey or chalk white, with dotted mesh covering the front half and a silver strip at the bottom. 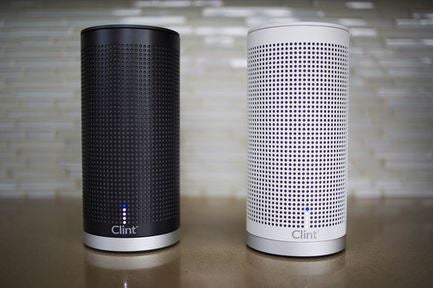 At 210mm tall and 1kg in weight it’s pleasingly light and compact, making it easy to carry between rooms. Build quality is of a generally high standard although like Odin the buttons on top are clunky and unresponsive, which means you need to press them hard to make your command register. 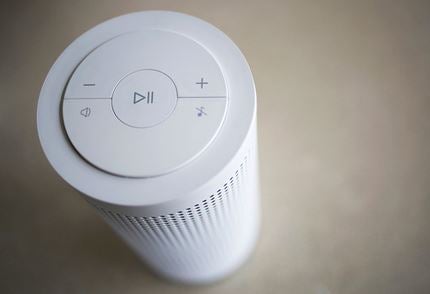 The controls include volume, play/pause, mute and a button that switches the unit between single and multiroom use. They’re large and clearly labelled with the relevant icons. To preserve the minimal look there’s no display panel, just a column of five lights at the bottom that pulses and flashes to denote the unit’s status. The lower four lights are white but top light changes from purple to blue depending on which input is selected. 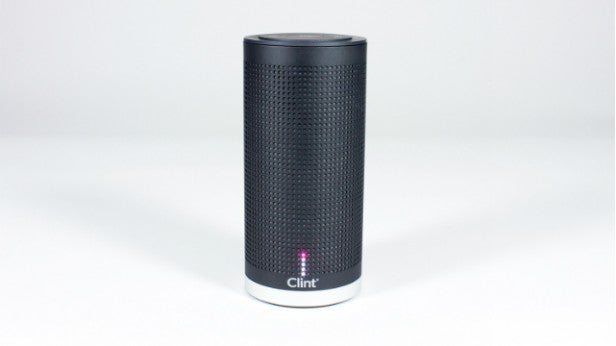 On the back you’ll find a 3.5mm mini jack input, which is useful for listening to music from old-school devices. The USB port allows you to play music from Apple devices without having to faff about with Wi-Fi, and is also used to share Wi-Fi settings with Apple devices and to charge them too. But sadly you can’t play music from flash drives – this is an Apple only affair. 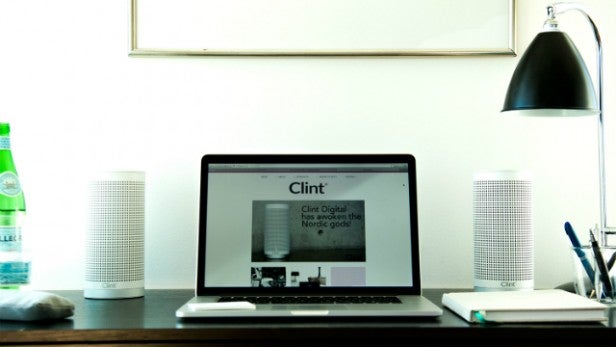 You don’t necessarily need a Wi-Fi router to play music on your wireless device – you can play music over a peer-to-peer Wi-Fi connection in Music Direct mode, which is handy when you take the speaker on your travels.

Multiroom is a key feature. When using DLNA you can stream music to up to four speakers at once in party mode, or send different sources to individual speakers (Spotify in the bedroom, DLNA in the lounge, for example). You can also use two mono Freya speakers as the left and right channels in a stereo pair (the same as Odin).

Freya supports a wide range of audio formats, including MP3, AIFF, ALAC, WMA, WAV, OGG, AAC and FLAC up to a resolution of 192kHz/24-bit. The Class D amplifier provides 7W from the full range mono speaker, with a bass reflex system giving low frequencies a boost. According to Clint, the built-in battery takes three hours to charge from empty and provides six hours of playback time.

Press the Wi-Fi setup button on the back and a female voice announces that it’s “waiting for connection” – dash to your router, press the WPS button and the two should talk to each other automatically. Our virtual helper says “your device is now connected” if successful.

Owners of Apple iPhone, iPod touch and iPad can connect their device to the USB port and share its Wi-Fi settings using the dialogue box that appears.

A third connection method involves using the browser on your PC. Hold down the Wi-Fi button on the back of Freya and it should appear in your PC’s list of Wi-Fi access points. Connect to it, bring up Freya’s web page in your browser and configure the Wi-Fi settings onscreen. It’s a long-winded process but worked without any glitches during our test. You can carry out the same connection procedure on a smartphone using the Asgard app’s network settings. 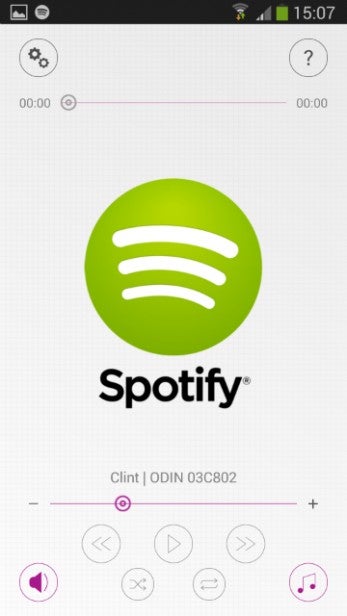 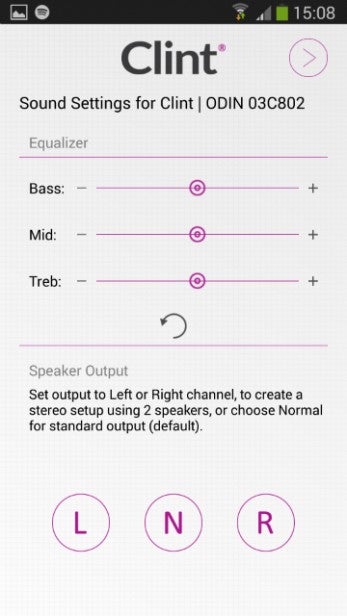 Talking of which, the Asgard app is really easy to use. Every menu is stripped back to the basics, which looks a bit sparse but results in clear, straightforward operation. You can tweak the sound EQ, select a music source or select which multiroom speakers you want to send music to. The slick and intuitive layout makes it a decent substitute for a real remote.

Naturally Freya can’t hold a candle to Odin’s commanding performance, but it does deliver a surprisingly big sound for such a small speaker. It goes loud without much distortion and kicks out a full, well-balanced sound.

Key to this is the unit’s tight and punchy bass output. When you play energetic dance tunes, kick drums hit hard and basslines are beefy. It’s not boomy either – each note starts and stops without lingering, resulting in a fast, agile groove. 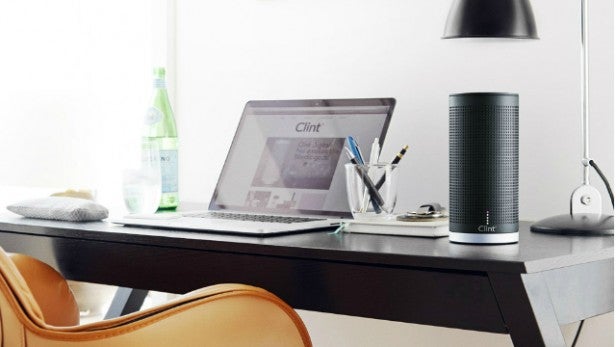 It doesn’t fill the room like Odin but generates enough volume and energy to make you feel involved in the music. It’s a mono speaker, but like Odin you can use two Freyas as the left and right channels of a stereo pair, all configured within the Asgard app’s multiroom settings.

Also impressive is the level of refinement in the music. This isn’t the hard, shouty performance you sometimes get from portable speakers of this size – there’s plenty of finesse in the high frequencies, natural-sounding vocals and a tone that’s easy on the ear. Piercing mute trumpets sound clean and undistorted too, which is no mean feat.

Occasionally you’ll get a little colouration when a soul diva belts out a high note with the volume up loud, but for everyday listening Freya’s punchy, polished sound really fits the bill.

As for multiroom operation, we placed Freya and Odin in two different rooms and used the Asgard app to send music to both with no problems whatsoever. 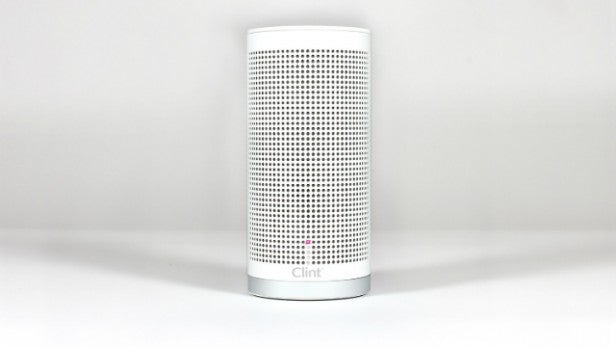 Should I buy the Clint Freya?

Freya’s nifty features, chic design and surprisingly powerful sound make it good value for money. You’re getting an AirPlay, Spotify Connect, DLNA and multiroom-ready portable speaker for under £200, which is not to be sniffed at given that you can pay up to £700 for similarly-specced AirPlay speakers. It’s also easy to set up, the Asgard app works well and we like the cylindrical design.

The clunky top buttons and loud-volume colouration are minor gripes, but there are enough positives elsewhere to make Freya worth a punt.

Naturally she can’t summon the same thunderous power as Odin, but Freya’s bassy, detailed sound is impressive for such a small speaker, while the smart Scandinavian styling, impressive feature list and multiroom capability make it money well spent