Having survived the miseries of The Godfather II, it’s nice to get a reminder that not all liasons between Hollywood and the games industry must end in disaster. In fact, those of us who remember The Chronicles of Riddick: Escape from Butcher Bay remember it partly because it’s one of those rare games that actually does justice to the cinematic property it’s based on. In fact, you could argue that it understood the appeal of Riddick better than the Pitch Black sequel it tied into.

Unfortunately, not as many of us remember it as the game deserves. When Escape from Butcher Bay was released back in 2004, critics everywhere raved on about its technical achievements and innovative gameplay, and everyone who played it, loved it.


Unfortunately, the timing and the choice of platform could have been better. Riddick arrived just when everyone was transfixed by the recent or imminent launches of Half-Life 2, Doom 3 and Halo 2, on a platform – Microsoft’s Xbox – that not enough people actually owned. Sales were OK, but not amazing, and the excellent, enhanced PC port that followed couldn’t fix that – partly because PC snobs refused to appreciate the qualities of what they saw as another crummy console conversion (see also Gears of War last year).

Now, with 2007’s The Darkness under its belt, Starbreeze has returned to its underappreciated classic, with a new version rebuilt, remixed and remastered for the HD console era. And along the way, something strange and interesting has happened. What was originally pitched as a short extension to the original game has morphed into a separate entity; a second single-player campaign that plays out as something halfway between an expansion pack and sequel. Throw in a new set of multiplayer modes and you have the contents of Chronicles of Riddick: Assault on Dark Athena.


The big surprise is how well the original game stands up nearly five years after launch, with the only real change being a shiny HD paintjob. It helps that, unquestionably, Escape from Butcher Bay was a game ahead of its time; like Half-Life 2 it tried to redefine what an FPS could be, taking elements from the stealth and adventure genres, and making them work within the confines of a gritty, sci-fi, prison break action game.

Perhaps the adventure elements feel a little crude in these post Fallout 3/Mass Effect/STALKER days – it’s the kind of thing where you need to talk to Prisoner A to get the information that Prisoner B needs a good duffing, then get Prisoner C to fix you up with a shiv to do said doffing with – but at a time when most character interaction involved bulllets, this seemed hugely impressive.

Even by today’s standards, the story and the characters are well constructed, lines are delivered with conviction and the pacing works brilliantly. Escape from Butcher Bay captures the feel and the tone of the Riddick universe as established in Pitch Black. It’s dark, and there’s no question that Vin Diesel’s tough guy is an amoral antihero, yet he still has a strange nobility, if only because the people he’s up against are always so much worse.


Nor should we forget the stealth elements, which are superbly integrated. Games that followed Riddick have made creeping and stalking feel like an unwelcome bolt-on. In Escape from Butcher Bay, it’s simply the way you play the game. Riddick isn’t a frontal assault, duck and cover gunplay kind of psycho. He belongs in the dark, stalking his victims, pouncing when the moment feels right.

The moment you truly get Escape from Butcher Bay is the moment where you stop behaving like you’re just playing another FPS and start thinking like Riddick. They, whomever they may be, are not the monsters. You are. Use the darkness, surprise them with your brutality, out-manoeuvre and out-think them, and you’ll be one corpse closer to escape.


All this stuff makes Escape from Butcher Bay a hugely compelling game, but what ties it all together is the visual approach. At the time, we were all very excited about the game’s normal mapping – a technology which gave textures an impression of tangible relief. It’s still at work in the remake, and that, when combined with the battery of surface, lighting and post-processing effects Starbreeze bought to bear on The Darkness, makes Escape from Butcher Bay look just as good now as the original did back then. We’re not talking Killzone 2/Crysis/Gears of War levels of wow factor, but there’s no way you could describe this game as looking dated. 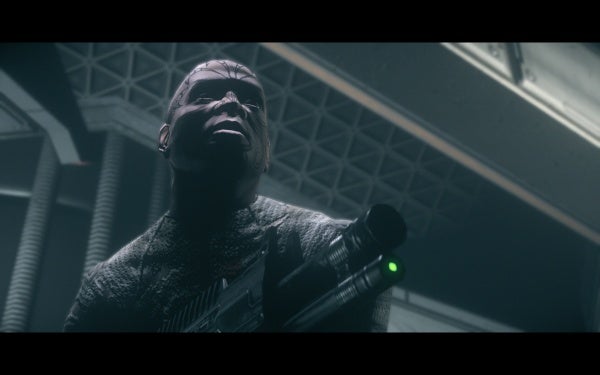 However, what impresses even more is the way the game puts you right in Riddick’s shoes – the way it alters the view to reflect sudden jolts, or his field of view and focus as you put him into stealth mode. The game’s replication of Pitch Black’s eyeshine ‘night vision’ effect would be hard to better, and the use the level design puts to blinding lights, torch-beams and strobing lights is exemplary, even now. Other games – notably the Thief series – did some of this stuff before, but Escape from Butcher Bay did it well, and a surprising number of other FPS developers have still only just caught up.


True, there are some signs of age in the old warhorse. These days, you begin to notice how relatively compact and confined many of the prison environments turn out to be, and aspects like regular backtracking and poor automated checkpointing begin to grate on your nerves after a while. Nonetheless, Escape from Butcher Bay remains a fantastic and fascinating FPS hybrid. If you didn’t experience it first time round, you owe it to yourself to do so now.

Now, at this point those of you who have read other reviews of the Assault on Dark Athena package might expect a big ‘however’. The common line on the second campaign, Assault on Dark Athena itself, is that it’s a damp squib, a retrograde step, even a crushing disappointment. I’d disagree. It’s not as fresh as Escape from Butcher Bay, and it has its share of issues, but minute by minute, hour by hour, it’s still a very fine FPS.

Again, I think this partly comes down to tone. The premise – Riddick’s journey towards the planet featured in Pitch Black is interrupted by an encounter with a slave ship – could have led to an uninteresting, clichéd set of missions, but Starbreeze has made it as gritty, tense and brooding as the original Butcher Bay campaign.


The look is closer to the gothic future fantasy of the cinematic Chronicles of Riddick and the storyline doesn’t go far beyond ‘escape the ship’, yet the campaign still packs in some interesting characters, some hugely dislikable villains, a handful of genuinely shocking sequences, and some brilliantly written and delivered dialogue. Even though the gameplay is really just more of the same sneak and slaughter stuff, you don’t feel like you’re just working through another mission pack. In fact, a handful of new game mechanics, mostly to do with exploiting the hideous, half-human drones that patrol the Dark Athena, give Assault a surprisingly fresh feel.

I think the campaign’s major issue is its structure. The first two thirds have a few hiccups and a little too much backtracking, but these are easily compensated for by a range of tense encounters, generous helpings of suspense and some masterfully engineered set-piece sections. Then, however, the campaign puts a foot wrong, dumping you on a dusty, alien planet without enough places to play hide and sneak, and asking you to, essentially, play an old-fashioned corridor shooter.


As corridor shooters go, it’s not bad, and it’s almost rescued by one wonderful weapon and a clutch of really challenging adversaries. However, you can’t help feeling that Riddick is out of his element, and not in a good way. Where he should be the predator, he’s suddenly just another grunt with a gun. At this point, Assault on Dark Athena also throws in some dubious, cheap-ass ways to kill you, which don’t do much to earn back your goodwill.

Luckily the final segment, with Riddick back in the dark where he belongs, helps the campaign win back your heart. In my book, three quarters or more of good game and one quarter mediocre game still makes a decent game overall, and even when Assault on Dark Athena is at its worst I never found it less than engaging. Were it a proper sequel I’d probably expect something more, but as an expansion it’s easily good enough to complement Butcher Bay.

The final portion is, of course, the multiplayer. Sadly, and in the interests of full disclosure, I can’t really tell you much about it. Why? Well, I only have pre-production, pre-release code and the servers have only just gone live. I’m reliably informed that the Pitch Black mode, with one player playing Riddick while the others hunt him, is a hoot while the other modes are a bit take ‘em or leave ‘em. If you feel different, leave your comments in the usual place, and I’ll add mine when I get a proper retail box.


For me, multiplayer isn’t really the point, anyway. Riddick was always about delivering a visceral, narrative-driven single-player FPS. Starbreeze showed it could do this with Escape from Butcher Bay, then showed it could do it again with The Darkness. Now, Assault on Dark Athena – while the weakest of the bunch – makes it a hat-trick. It’s still way beyond anything you might call average, and in its best moments it’s very good indeed. That’s enough to keep me going, enough to re-inspire the Riddick faithful, and enough to keep Starbreeze in the frame as one of the most interesting action game developers around.


Assault on Dark Athena isn’t consistently as great as Butcher Bay, but it’s still a fine hybrid stealth/FPS. Put the two games together, and you have an exceptional package.