The ChefSteps Joule Sous Vide is simple to set up and use, but the app isn't always as helpful as it could be and many of the recipes we tried didn't produce particularly good results.

What is the ChefSteps Joule Sous Vide?

Sous vide – cooking food in a vacuum-packed bag by submerging it in a water bath or steam to preserve colour, moisture and nutrition – can require a fair amount of kit, from a standalone cooker to a steam oven. However, wand-style sous vide cookers are a growing category. Slimmer and smaller than others, so it can be easily stored, ChefSteps Joule Sous Vide is operated by an app via Bluetooth and/or Wi-Fi. It’s inserted into a pan of water on a trivet, where it heats it to degree-perfect temperature, allowing meat, fish, vegetables and even desserts to be gently cooked.

The ChefSteps Joule Sous Vide costs more than most sous vide wands, but where it delivers is on storage – it’s half the size of many, so can fit in a drawer. Its sleek exterior is devoid of buttons, except one at the top that can be pressed to halt cooking manually, and a single light that changes colour to let you know it’s heating up, cooking, or if there’s a problem. 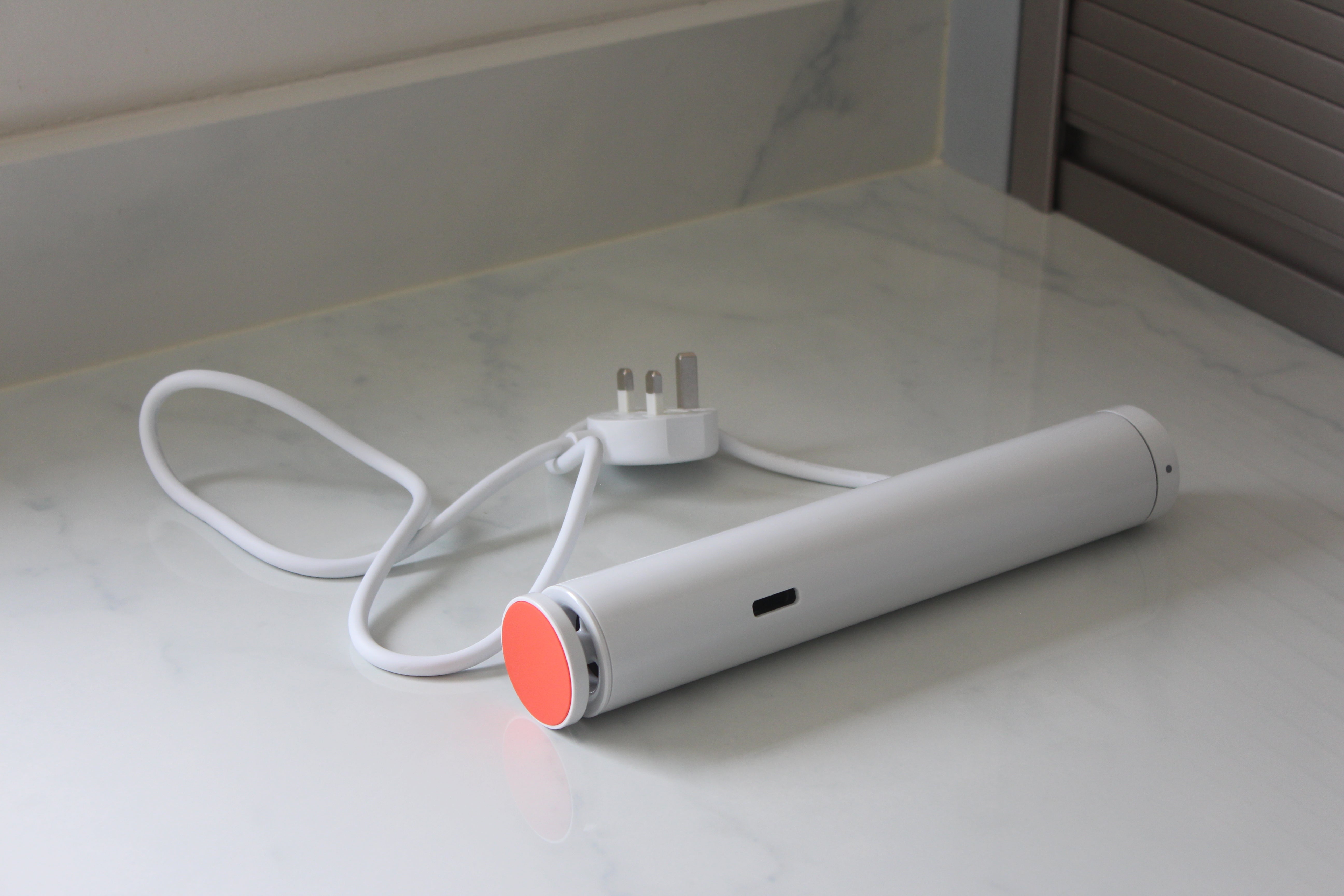 At the bottom, there’s a strong magnet that attaches to the bottom of an induction hob-compatible pan, a clip halfway up that goes over the side of your pan, and an inlet and outlet to circulate and heat the water. Wi-Fi connectivity is optional, should you want to walk away without leaving your device behind. The app gives a choice of recipes that include videos and presets for the temperature and time, or the option of setting the time and temperature yourself. 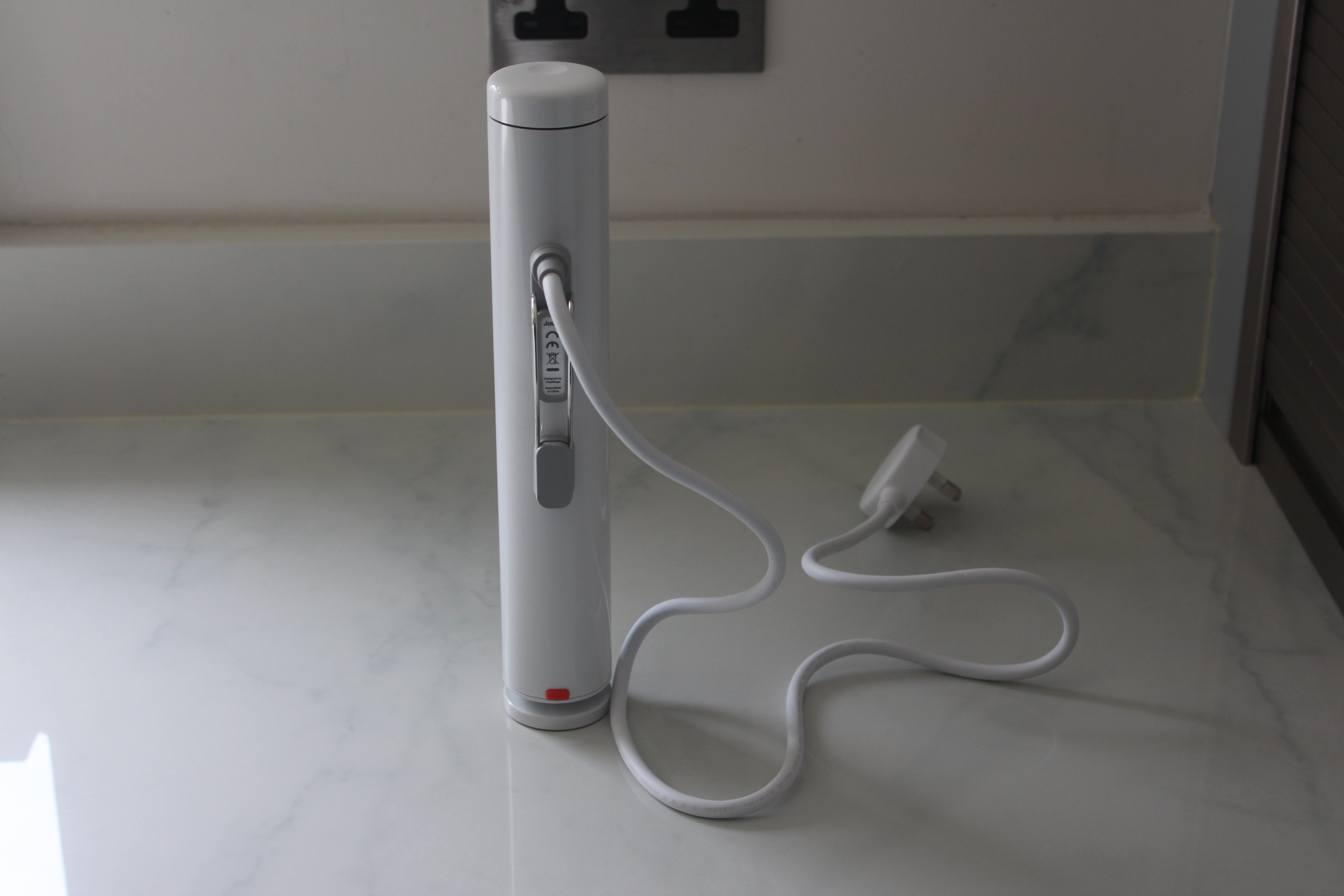 ChefSteps Joule Sous Vide – What’s it like to use?

Sous vide means ‘under vacuum’, but cooking with Joule only requires food cooked in ziplock-style bags (or jars). Not using a vacuum packer means it’s not strictly sous vide but more high-tech boil in the bag. Where it does tend to recommend vacuum packing is for vegetables.

Connecting Joule via Bluetooth on my Android phone was straightforward, as was linking it to my wireless network, which gives you a bit more range. I’d saved some recipes from the ChefSteps website using my Joule account but was disappointed to find that these weren’t saved in the app when I logged in.

There’s little guidance about what size pot to use but I chose my largest stainless-steel pan and filled it with warm water. Even though this was a big pan, only the bottom of Joule’s clip went over the rim, indicating that a high-sided pan (ie a stock pot or American-style pasta pot) might be a better match. 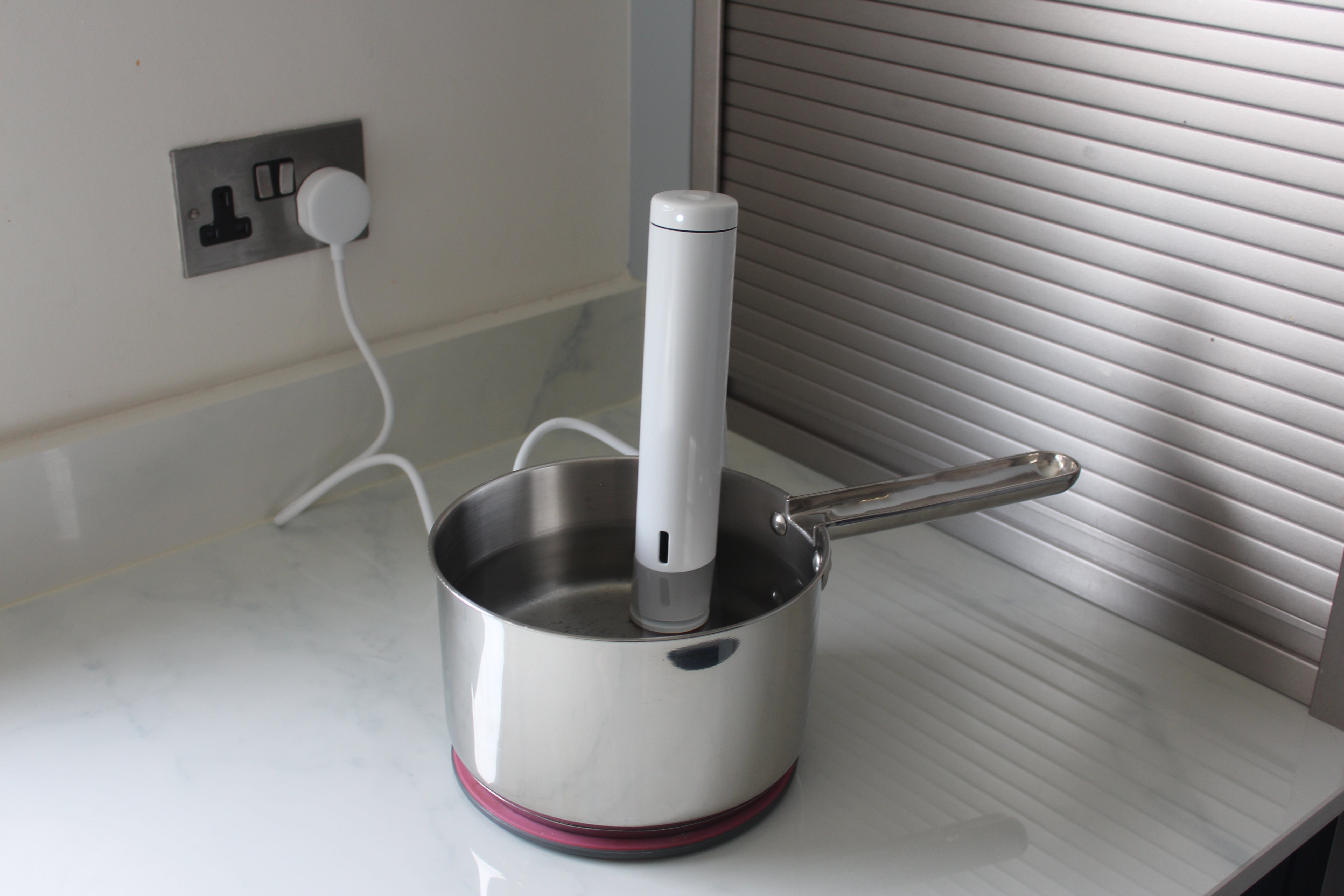 I started by cooking one of its starter recipes for steak. While the water heated, I placed the meat in a bag along with seasoning and oil, and I sealed it. 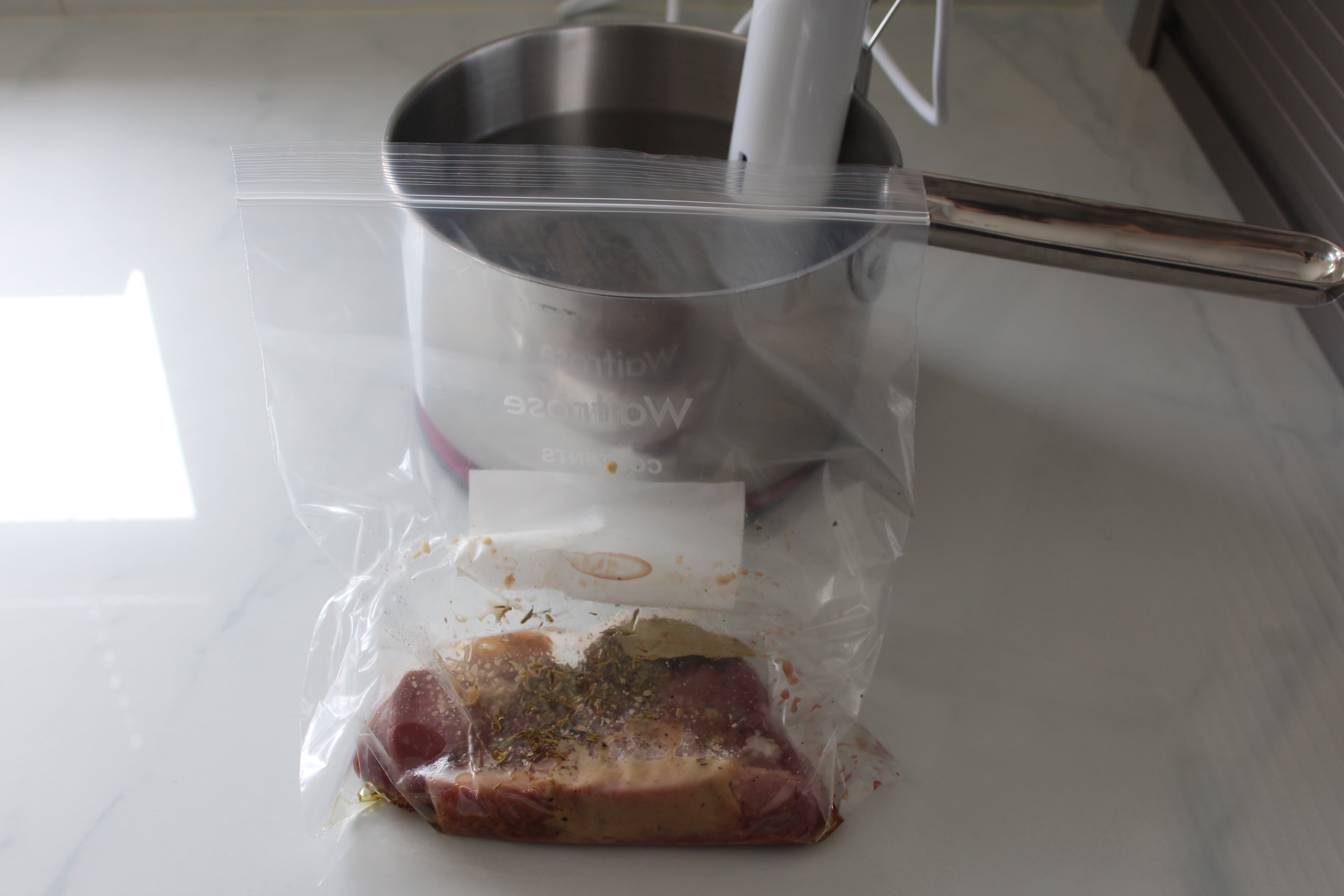 There wasn’t a lot of guidance as to how much water to cook with – only that there needed to be at least a 2.5cm gap between the surface and the top of the pan. This can be hard to achieve when factoring in displacement for the food and air in the bag. I found that as the water circulated and heated, a fair amount was splashed onto the worktop around the pan. This remained an issue when I placed the bag in. 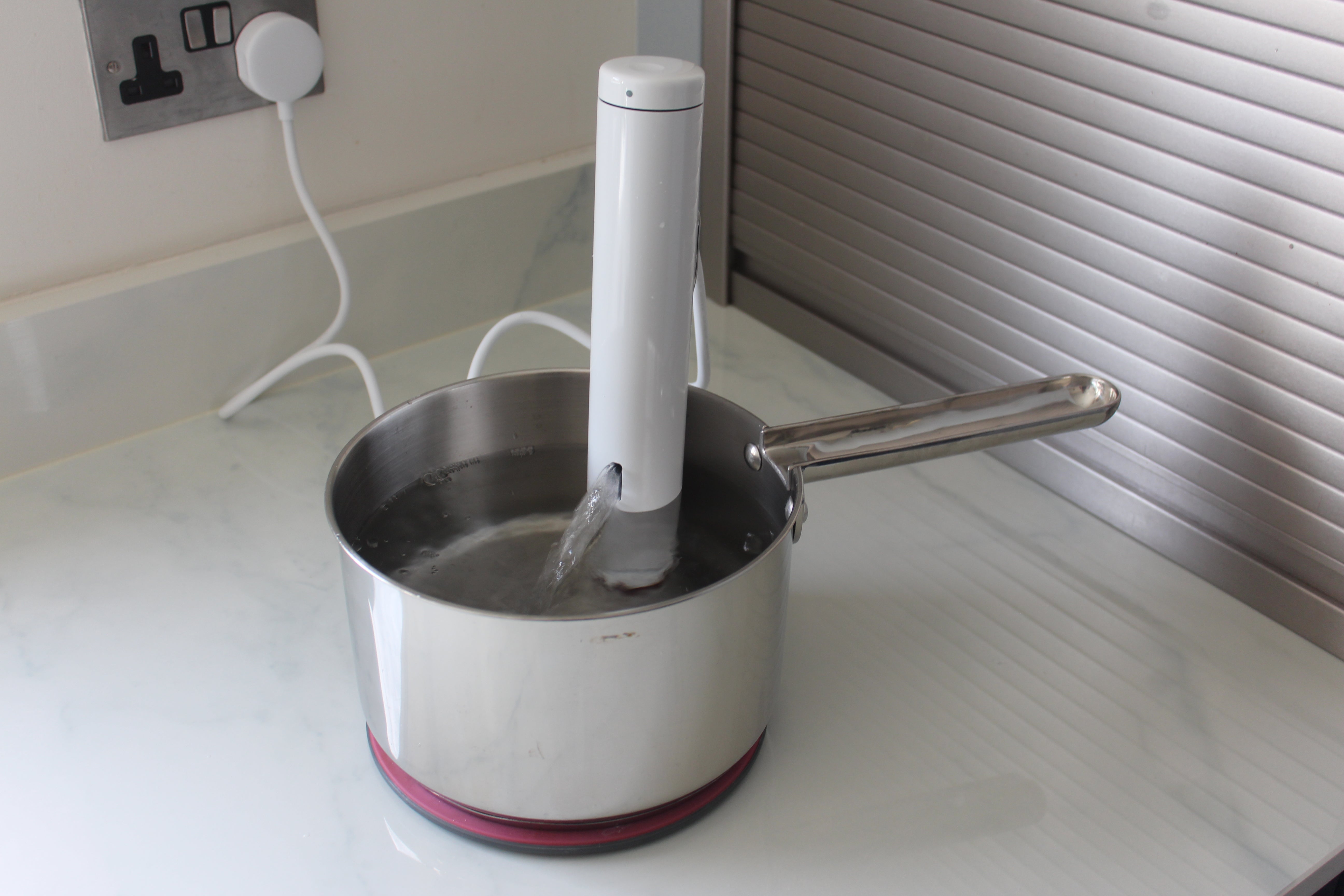 The app alerted me when the water had reached 53C (which took about five mins) and was ready to cook. Rather than beginning automatically, I had to select to start it, which changed the flashing light on the Joule to steady green. 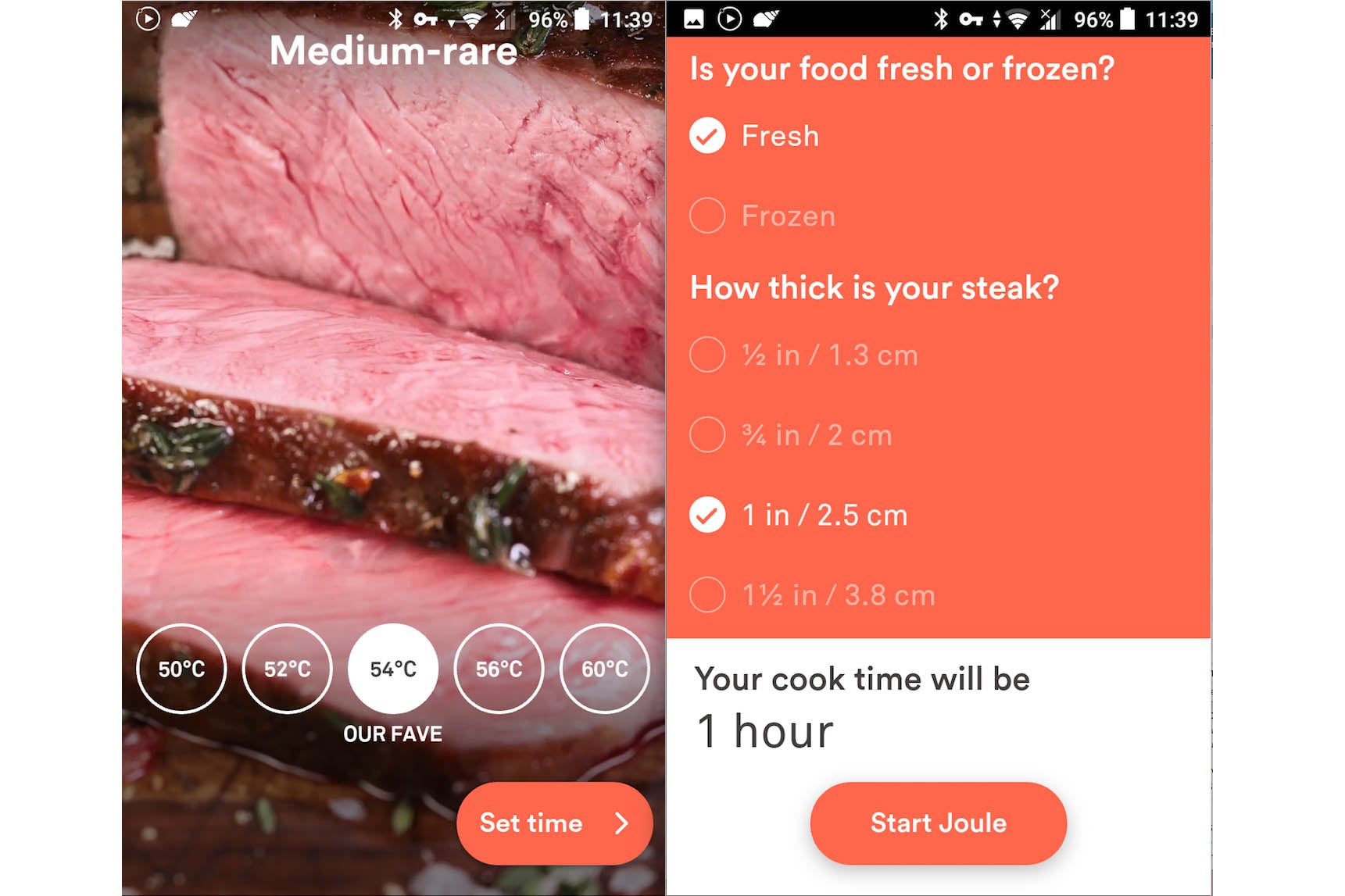 The steak was predicted to take an hour, with a countdown on the app, which was handy. However, the sound of running water in the kitchen was odd and I kept thinking I had left the tap on. 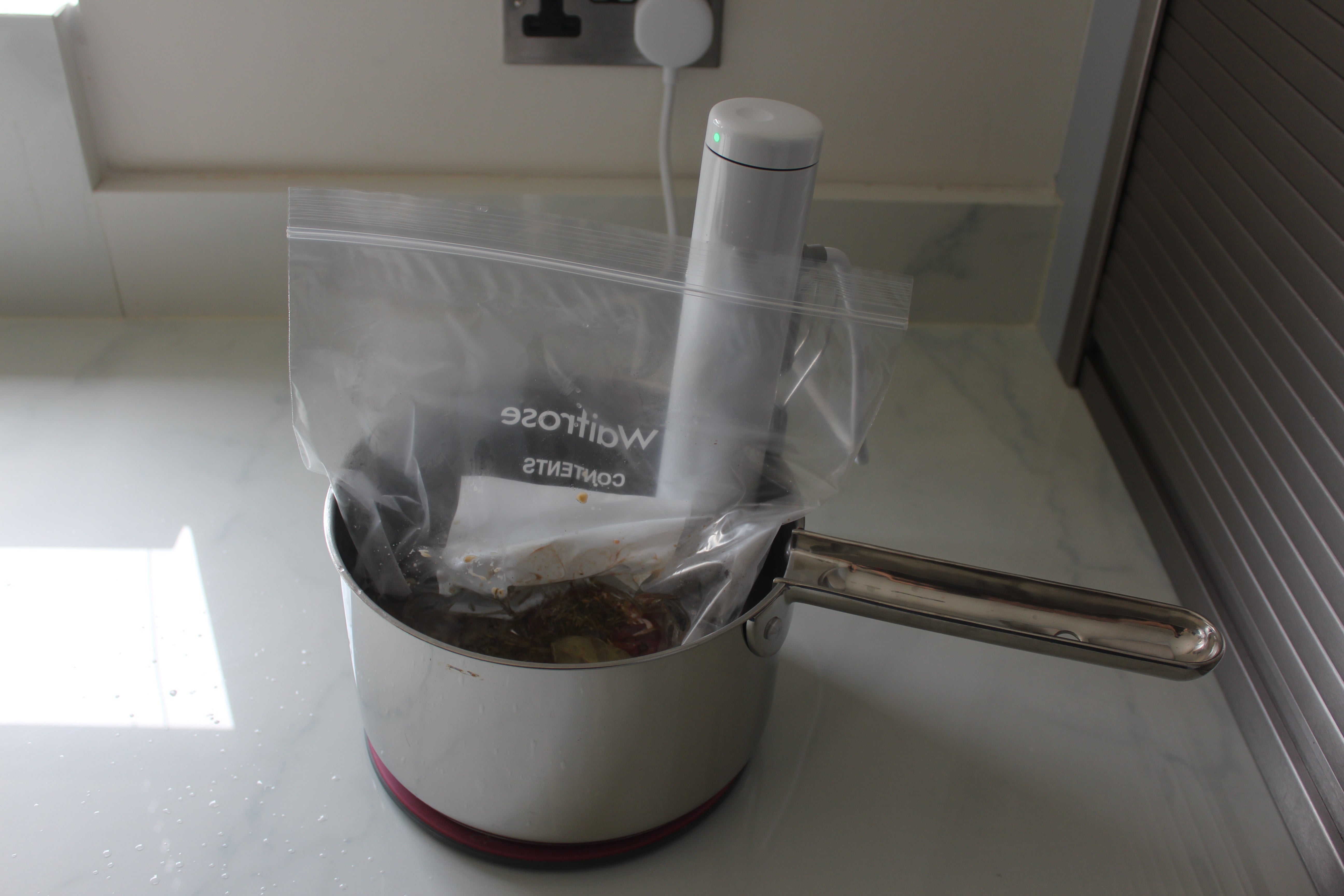 After an hour, the steak was ready and an alarm went off on my phone. I stopped the cooking and removed the meat. It was brown but unappetising. 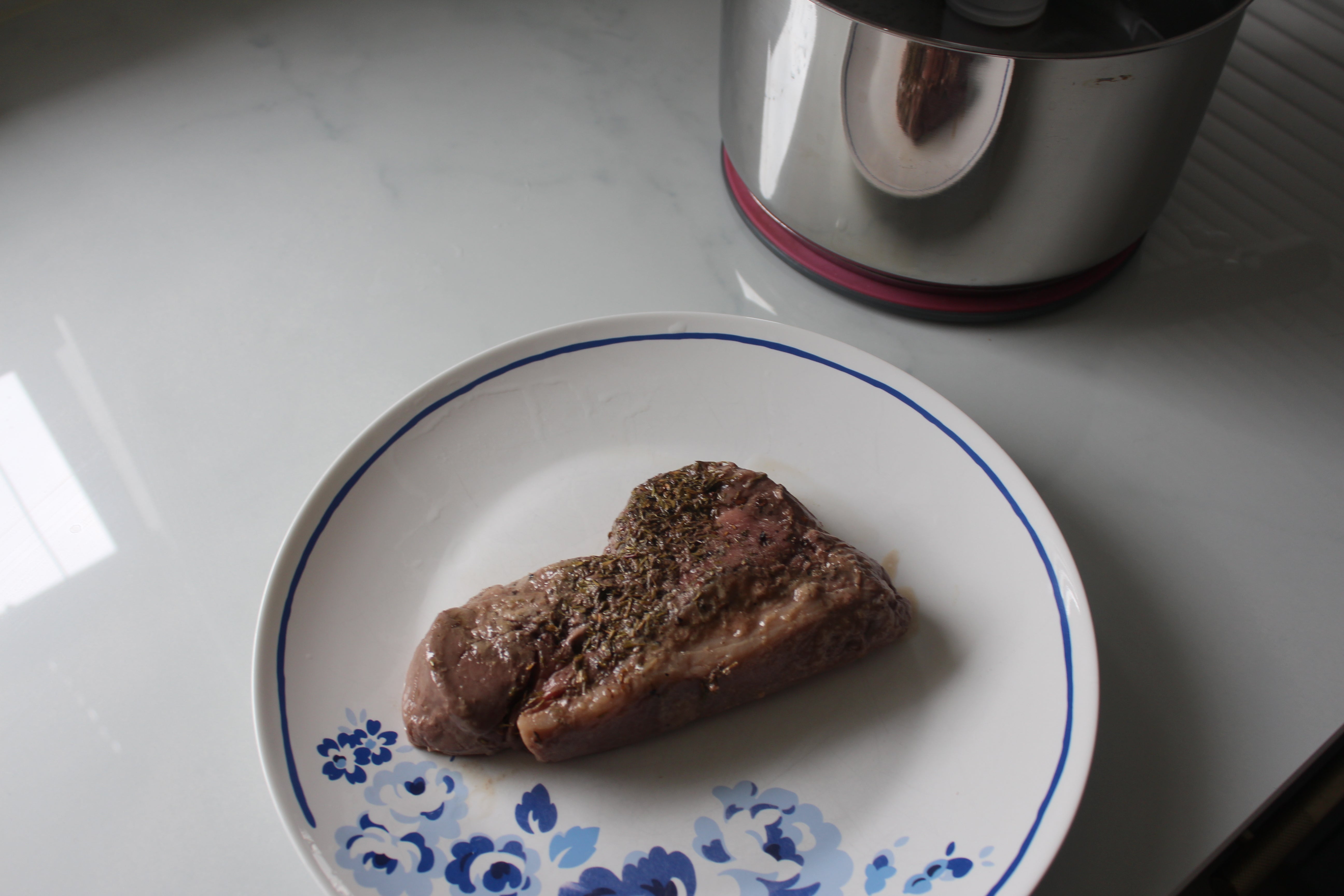 As I’d stopped the cooking, the recipe on the app finished even though I knew it recommended searing the steak after. I had to go back into the recipe to read the instructions for this. A light sear on both sides made the steak look better but it was disappointing to eat. 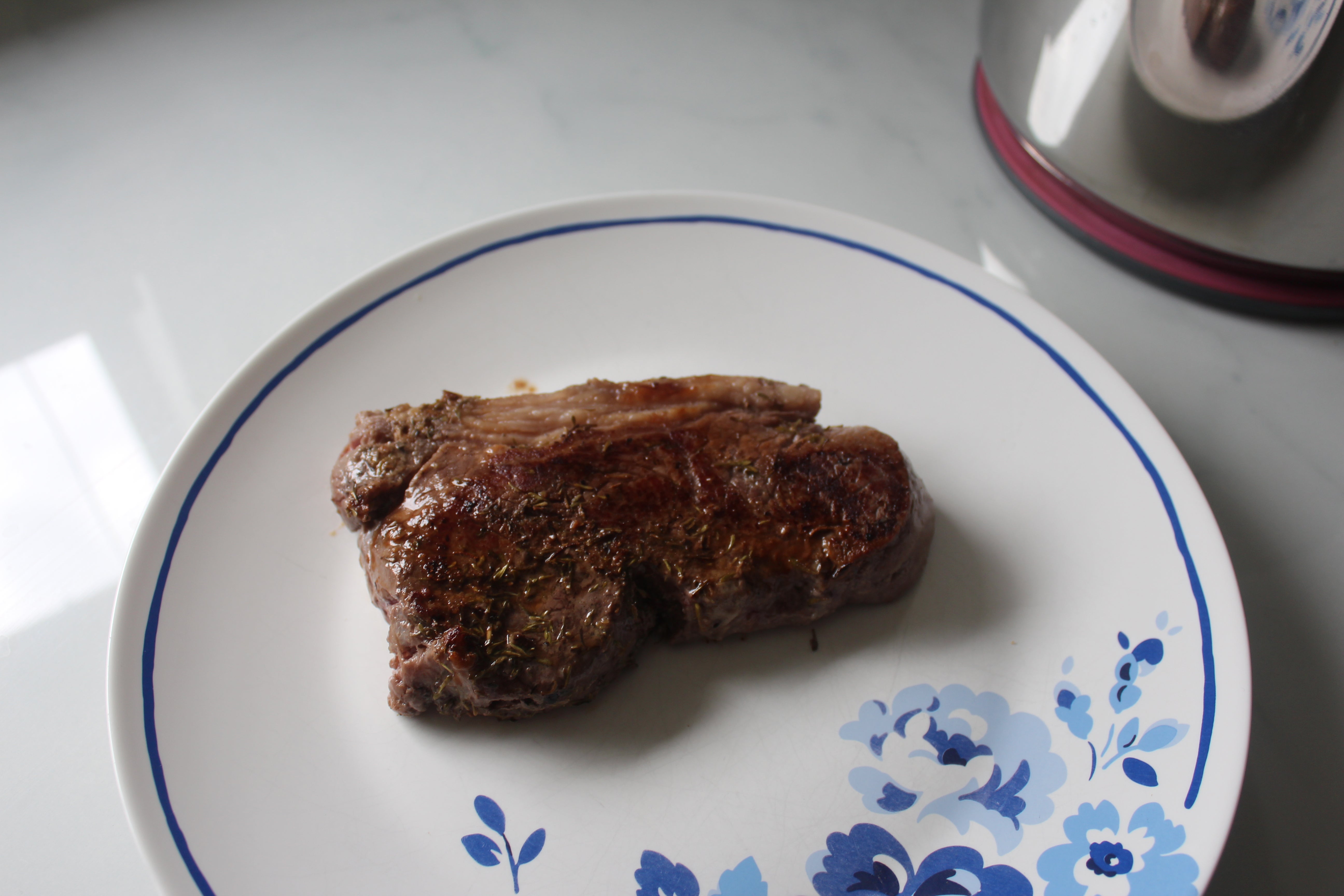 While it was perfectly pink in the middle, fatty strands within the meat were chewy as the low heat wasn’t enough to melt them as with traditional cooking. Also, this felt like a long time to wait for a steak.

Next, I decided to make chocolate pudding. 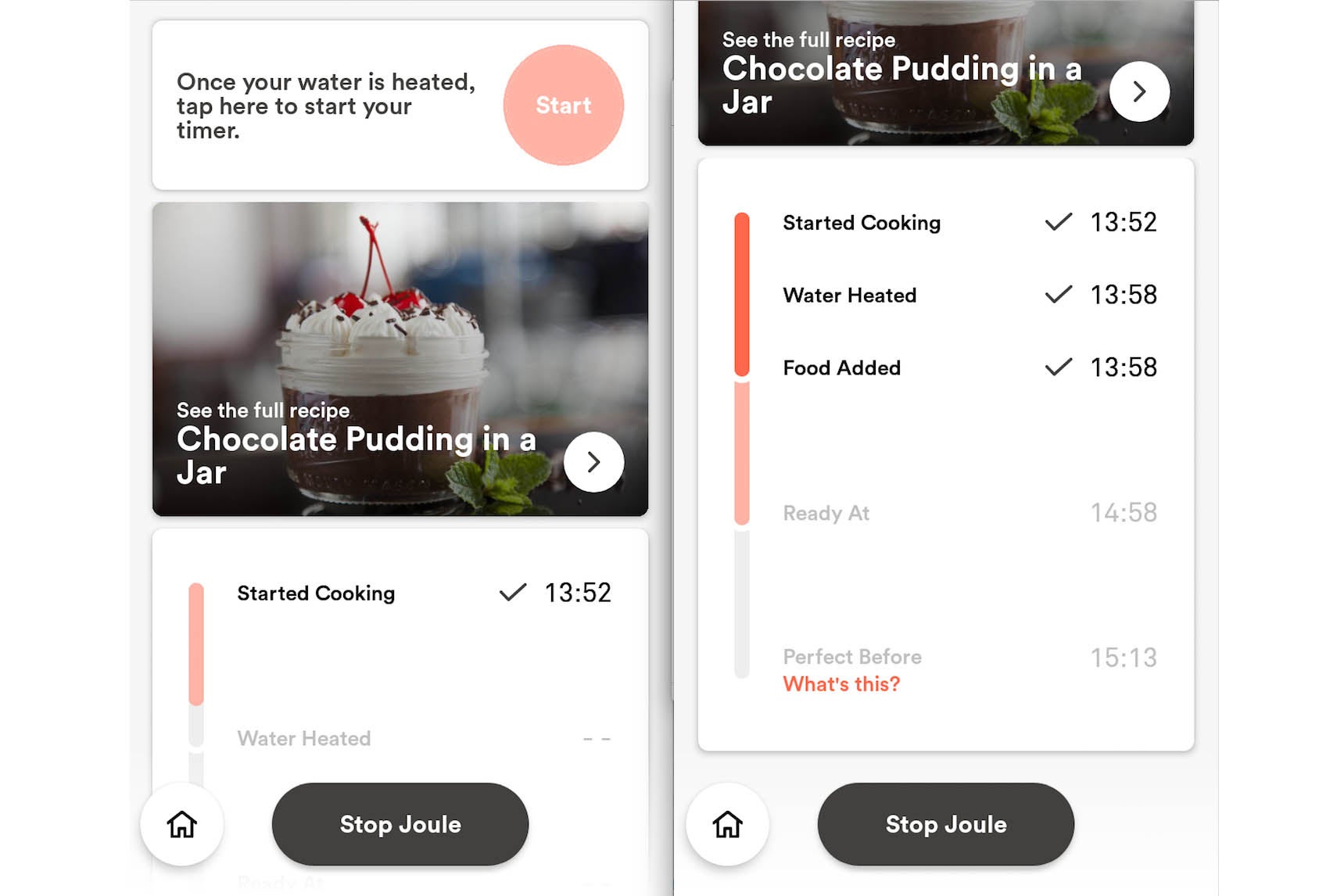 This required screwtop jars but as I didn’t have any, I used Kilner-style jars. As it warned that jars with lids on too tightly could explode, I removed the rubber seals. 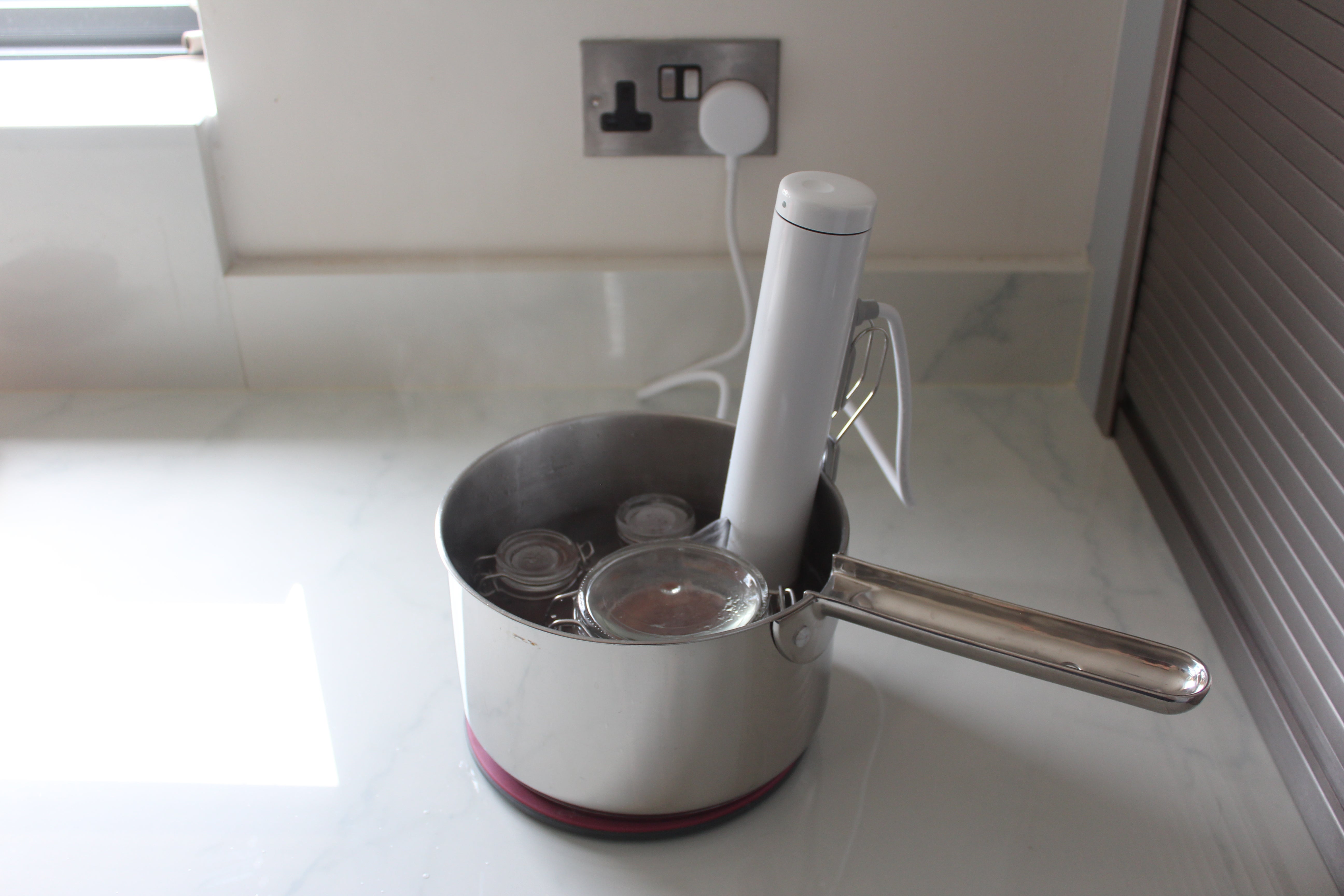 I found the recipe difficult to follow, because I had to keep reviewing the ingredient list – some quantities were split over steps and often oversimplified without watching the videos. Other ingredients were Americanised, such as light cream and cornstarch.

Gauging the water level I was required to heat was more challenging with jars, so I had to put them in beforehand to work it out. Once the water was heated to 60C, I added the jars using tongs. More water splashed the worktop than before and I noticed that even though the tops of the jars were above the surface, condensation started to cause water ingress. The puddings took an hour to cook, didn’t set and were unpalatable. 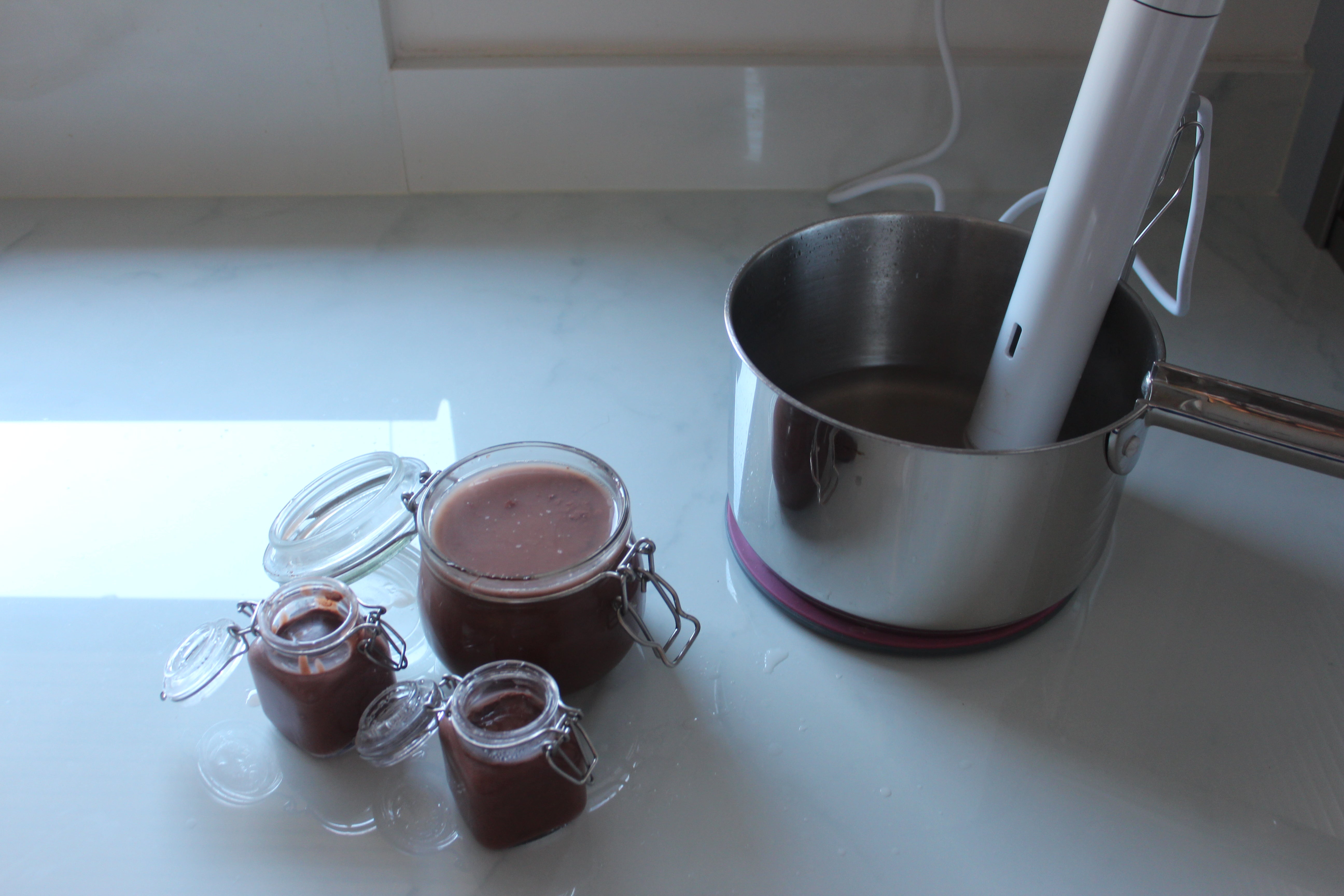 I also attempted to make carrot and parsnip mash, having found a recipe in the app, but this, puzzlingly, was made on a hob without Joule. Using the guidelines for cooking carrots, I put the bag of veg in with Joule for three hours at 85C. 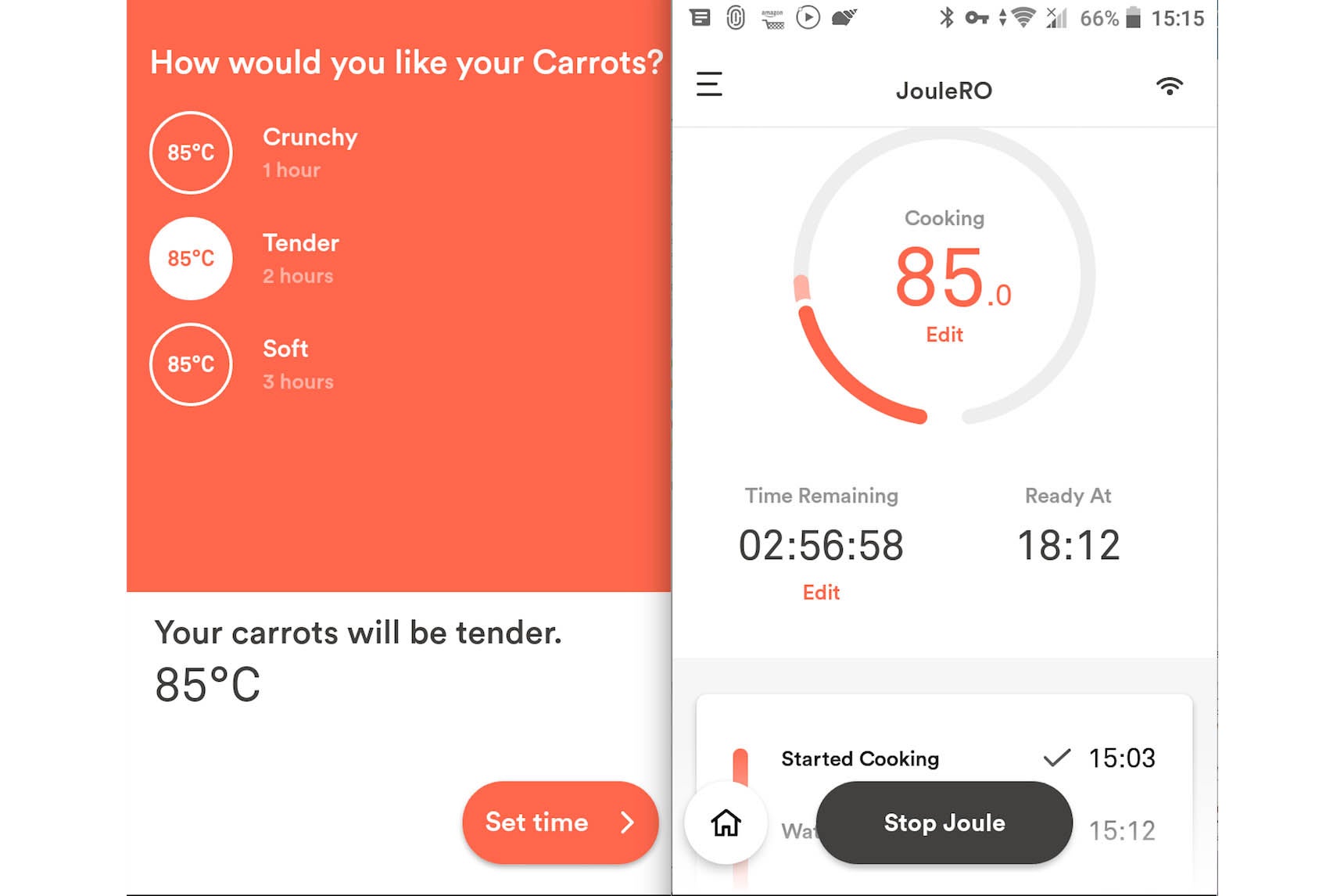 Some of the water splashed out or evaporated and had to be topped up. The vegetables were cooked but differed little in taste and texture from boiled. The ChefSteps Joule Sous Vide was simple to wash and all it required was a wipe down, with vinegar in water recommended for a thorough clean.

The app needs work to make it more suitable for the UK market, and given the lengthy cooking times, it’s unlikely you’d use the ChefSteps Joule Sous Vide for everyday meals. Unfortunately, all the recipes that we tried produced rather unappealing results. A separate vacuum packer and high-sided stockpot will help you get the most from it, while reusable sous vide bags (such as those by Stasher) are an eco-friendly way to steer clear of single-use plastic.

A simple product to use, but the disappointing results and unhelpful app detract from its appeal.