What is the Char-Broil Kamander Charcoal Grill?

Drawing on the principles of Kamado grill-style cooking, but with the ability to control and features galore, the Char-Broil Kamander Charcoal Grill turns charcoal barbecuing from an art into a science.

Rather than ceramic,  the Char-Broil is constructed from insulated, double-walled steel. This allows it to heat up quickly and evenly, with a temperature range from 50ºC for smoking to 345ºC for searing.

Its 20-inch diameter grill provides plenty of cooking, roasting or smoking space – enough for a 20lb (9kg) turkey, large joint of meat, or 14 burgers – so feeding a party of four to six should pose no problem at all. 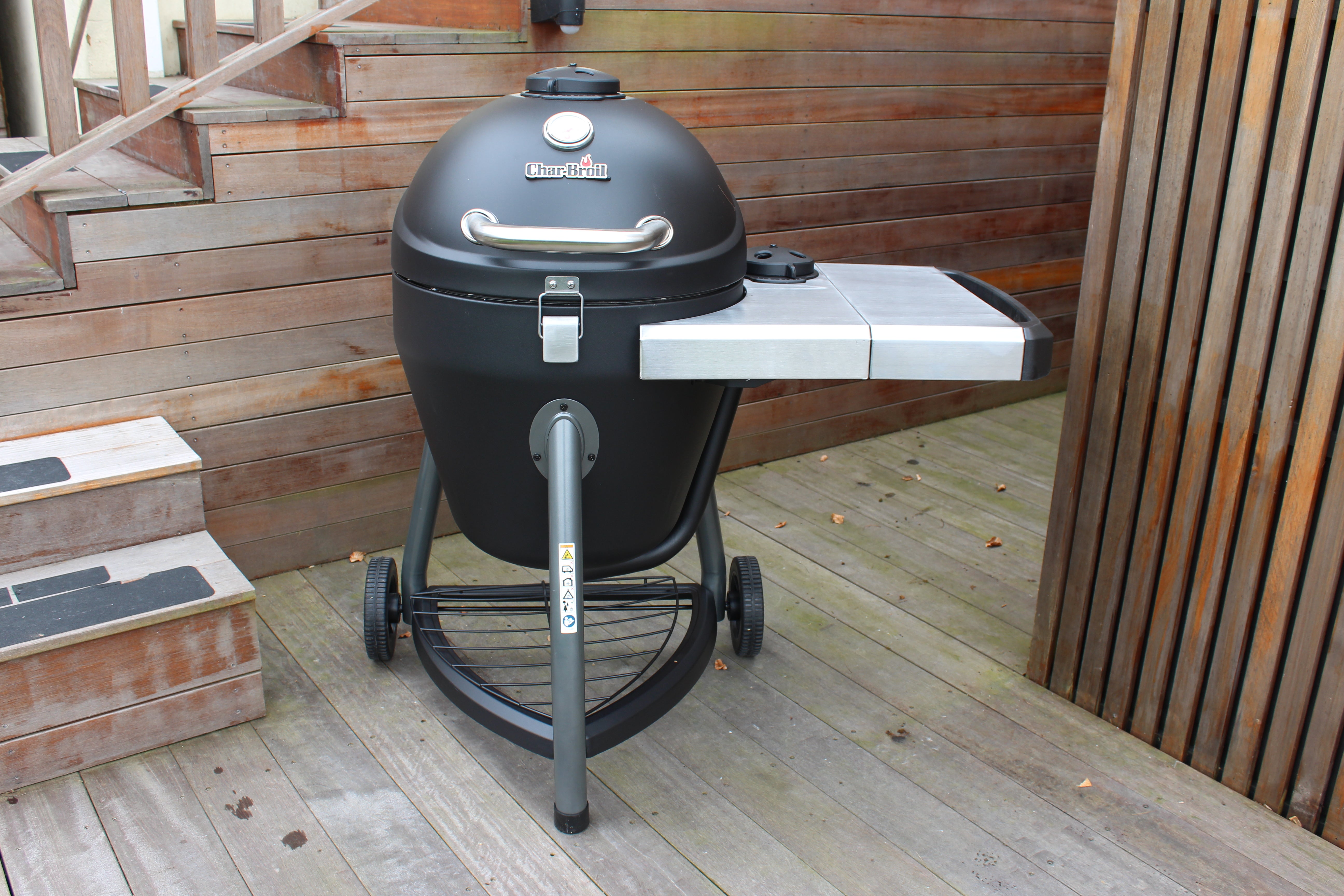 While it still has an egg-style shape, there are a few notable differences in the Kamander’s design. The first is its easily accessible dampers, which control temperature.

As well as a damper on the top to adjust smoke venting, there’s a second one nestled within the stainless-steel side shelf – rather than at the bottom, like many Kamados – that controls the amount of air drawn in.

Open both to 5 and the internal temperature will shoot up. Take them down to 1 and you have the perfect environment for smoking or slow-cooking. Closing both shuts down the grill. Inside, there’s a two-part cooking grill (which splits so extra charcoal can be added) above a drip tray, charcoal grill and ash-gathering tray. 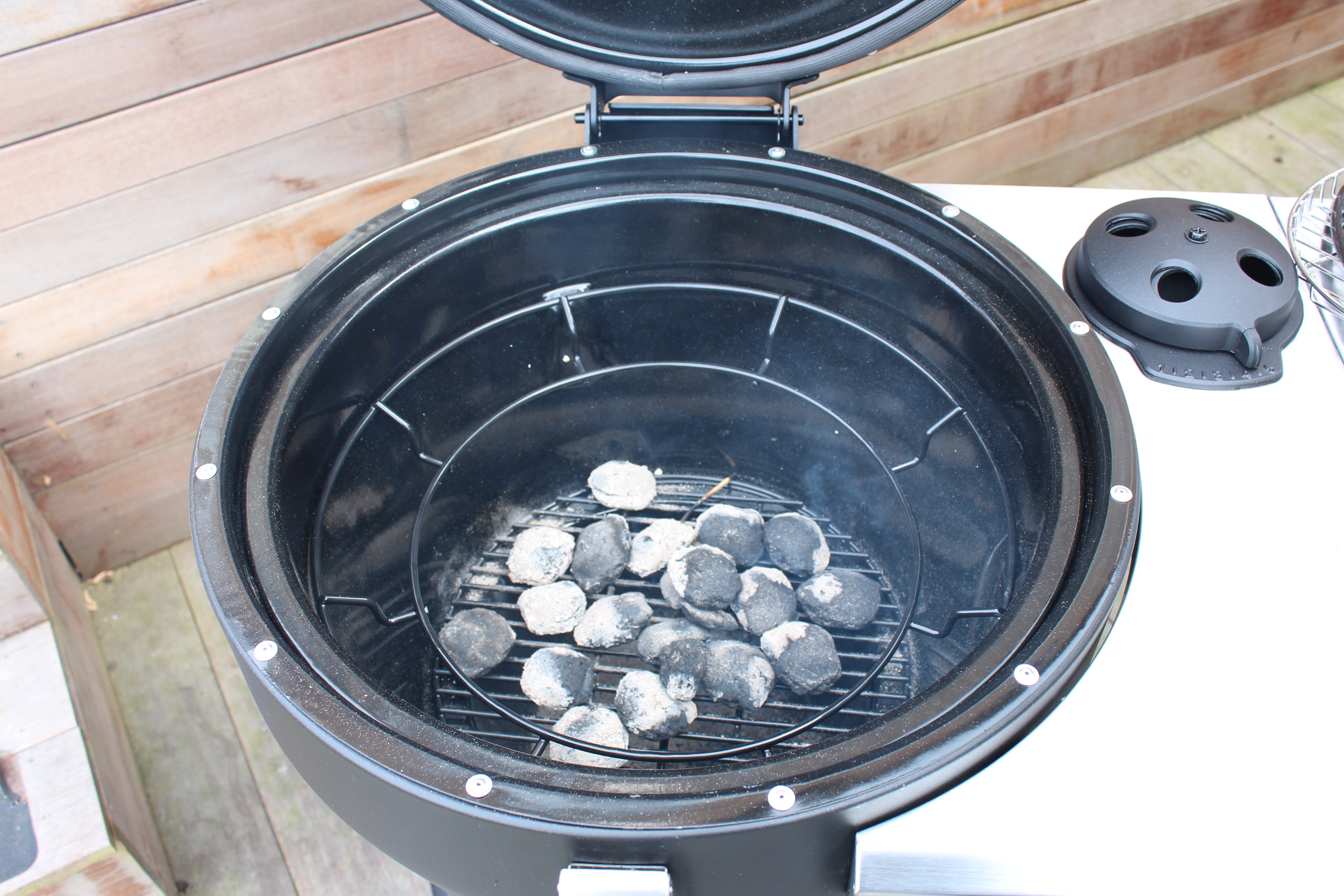 An at-a-glance temperature gauge is built into the lid, while a large, chunky handle to open it comes courtesy of Char-Broil’s barbecue heritage – it’s set far above the join to keep fingers away from heat flares.

A foldable extending shelf to one side provides substantial prep space, while hooks along the edge allow you to hang utensils. There’s also a rack at the bottom for accessories, a removable stainless-steel warming rack that can be set at two different heights, and a pair of robust wheels so the whole unit can be moved around easily.

Another plus is its efficiency – it requires less than 1kg charcoal to cook. 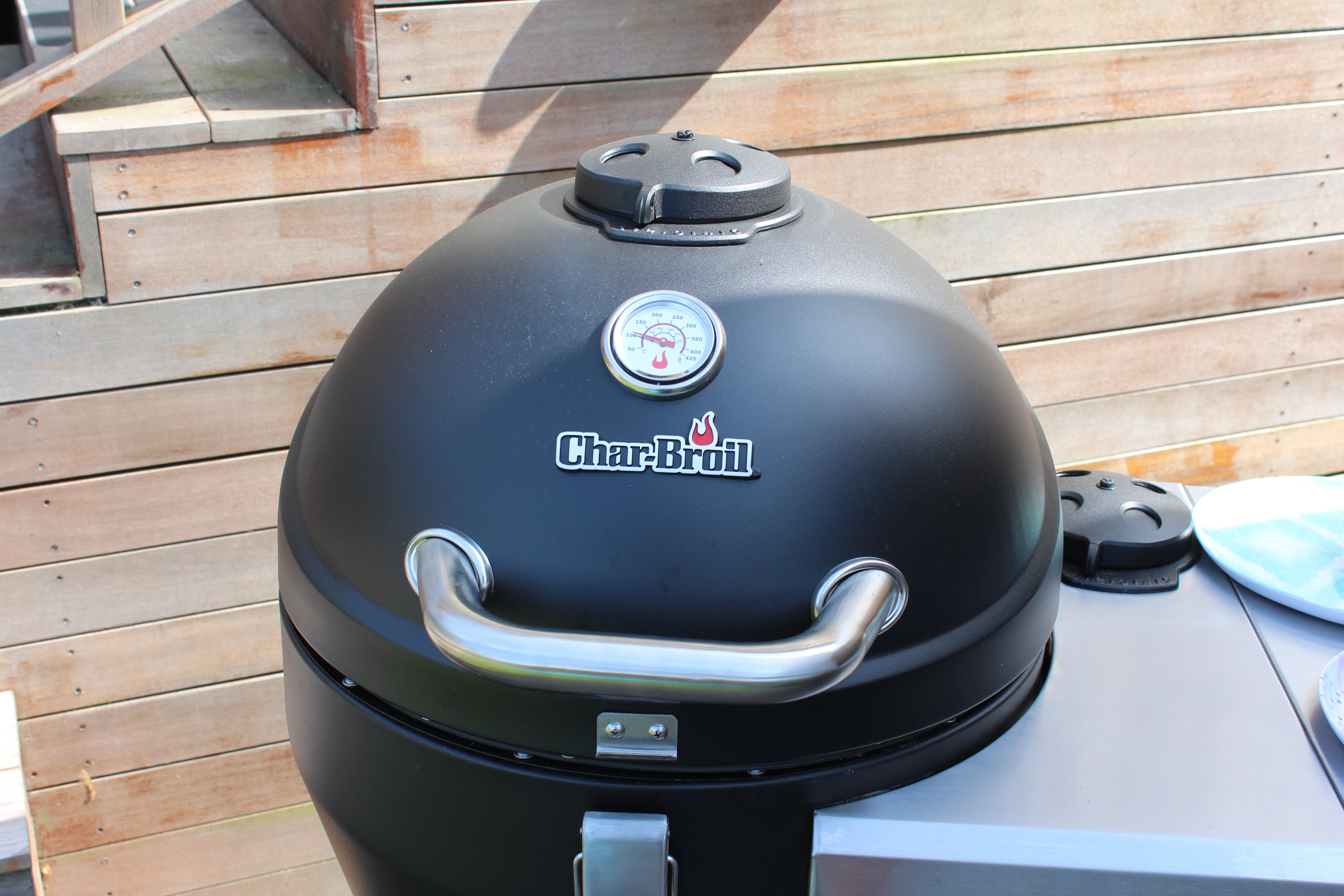 Char-Broil Kamander Charcoal Grill – What’s it like to use?

I consider myself to be reasonably capable, but despite this it took two of us to assemble the Kamander. While it only requires a wrench and a screwdriver to put together, some parts are bulky, plus elements such as the tray have screw holes that difficult to reach – meaning someone needs to lift it into place while it’s fixed.

It took about an hour to assemble the Kamander. Then, it needed to be seasoned, which involved coating all the inside with oil and setting a charcoal fire to burn for an hour. Prep completed, it was ready to cook.

Once lit, the barbecue took around 25 minutes to reach 180ºC, with the dampers set between 2 and 3. The instructions advised that you start cooking at a low temperature then raise it, rather than attempt to reduce it from high heat.

I began by adding chicken and pepper skewers and whole chicken legs to the grill. The damper on top grew quite hot, so I found it necessary to touch only the very edge of it when making adjustments (or you could wear an oven glove). I found it fairly frustrating at first not being able to see cooking progress without opening the lid – which lets out heat. To a certain degree, you have to trust that food is cooking and not be tempted to check too often.

Each time I did so, I also had to ‘burp’ the barbecue – lifting the lid slightly a couple of times to prevent flares. After around 25 minutes, I removed the chicken skewers. All were well cooked, not dry, and only slightly browned.

The marinated legs took just under an hour to cook all the way through, as they were quite thick and straight from the fridge. Again, they were noticeably tender and juicy, with no singeing or dry areas; the ‘oven’ style of cooking helping to seal in the moisture. 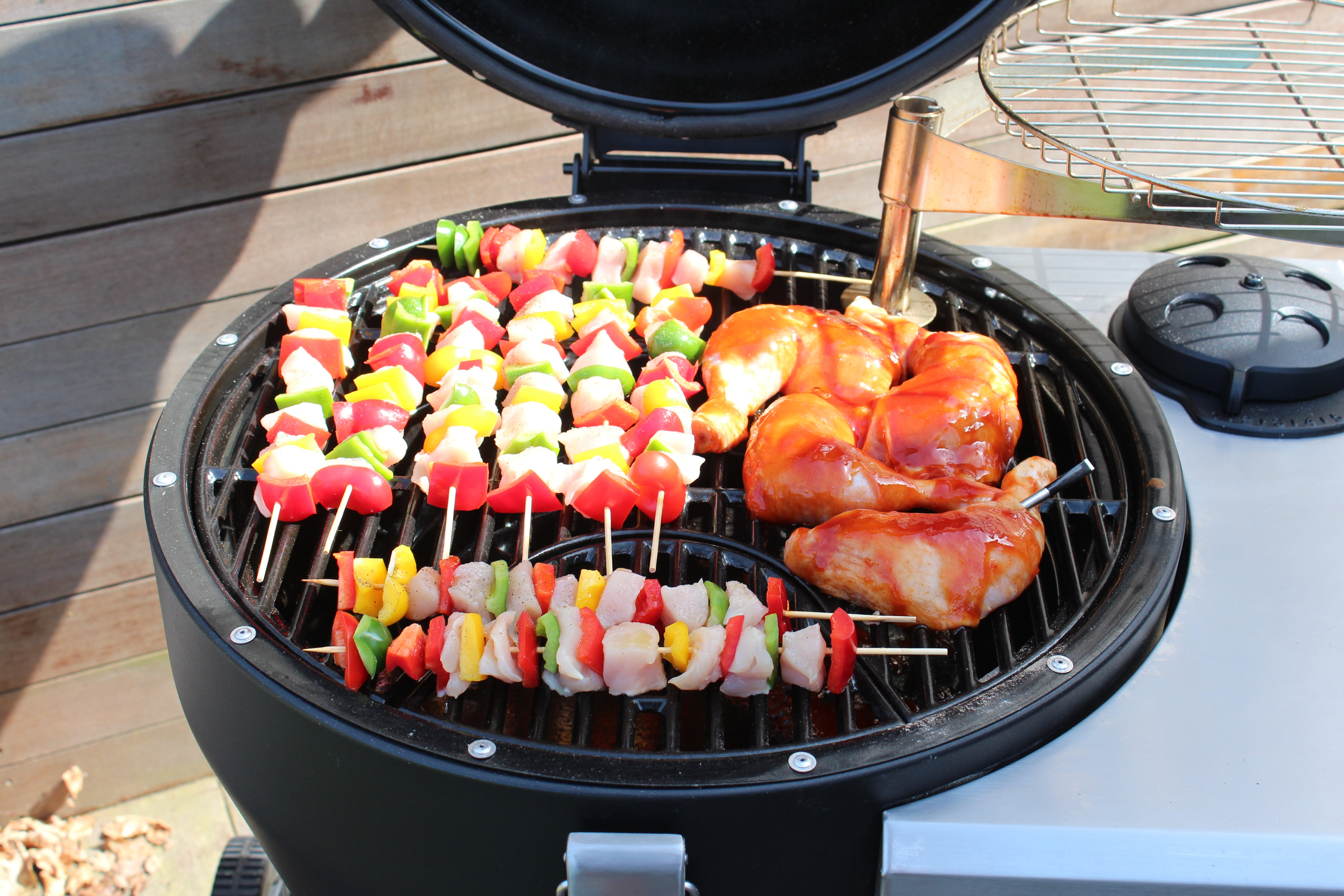 Raising the temperature to between 200-250ºC by opening the dampers to just over 4, I added sausages and burgers to the grill. After 15 minutes of cooking I noticed that the grill wasn’t getting quite as hot at the back, so moved the food around.

Other than this blip, the Kamander was forgiving and efficient to use. Food can cook for a while without drying out or burning, and generally it produced even results. The burgers and sausages stayed on for about 30 minutes and were both thoroughly cooked and succulent. 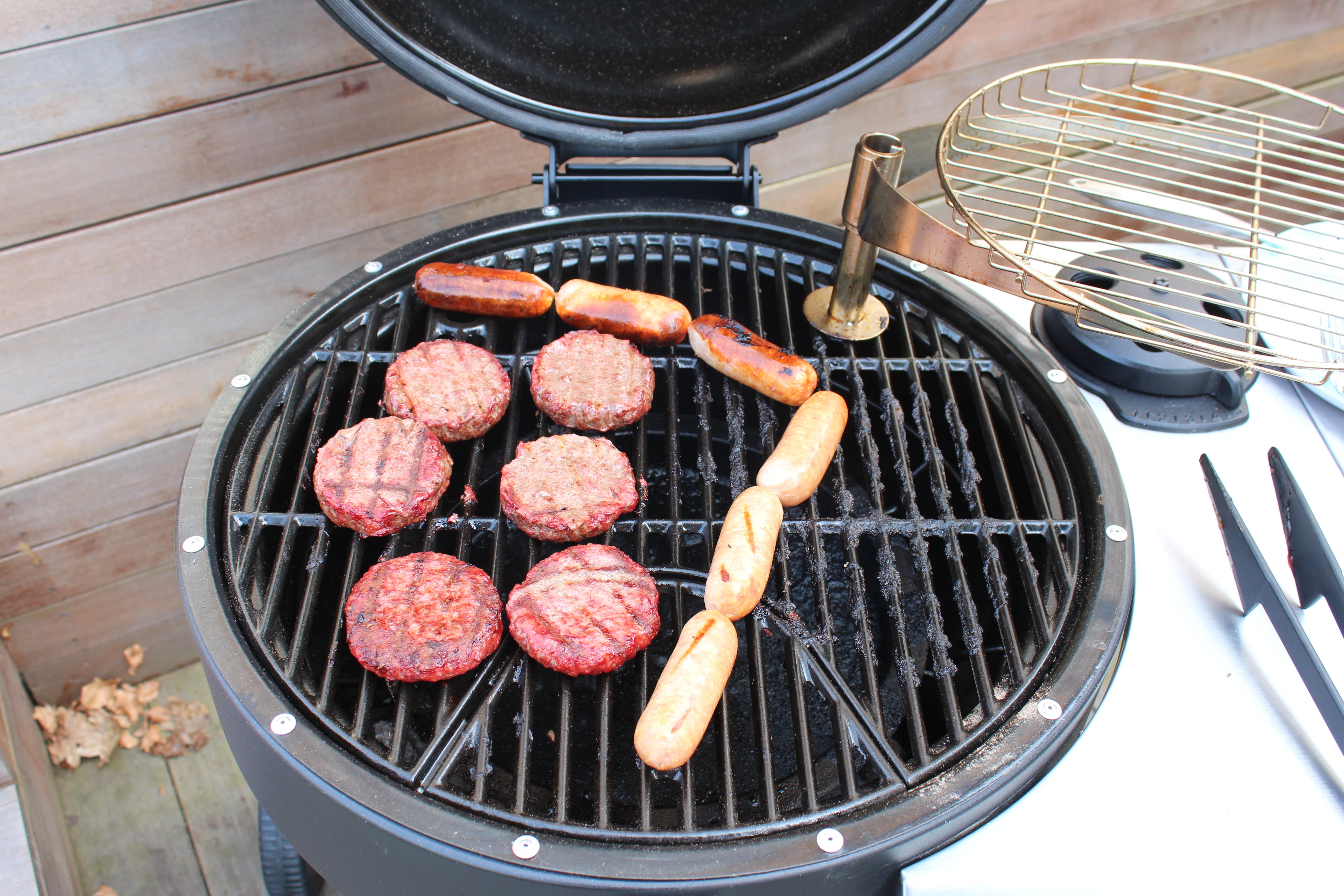 The lidded design produces far less smoke than an open barbecue, making it neighbour friendly and great for those with smaller gardens; you don’t need to position the Kamander too far away from where you’re sitting.

However, it also doesn’t produce any enticing cooking smells unless the lid is open, which many would argue is part of the appeal of barbecuing.

The grills and drip pan required a scrub to remove burnt-on residue. These parts also fit in a dishwasher and came out sparkling ready to be used again.

Assembly, seasoning and the price means that this grill isn’t an impulse buy, but more an investment for years to come. The Kamander is built to be robust, reliable and give confidence to a beginner – as much as it expands the horizons of cooks wanting to upgrade without losing a smoky flavour.

As well as putting an end to charred sausages and undercooked meat, the Kamander makes regular barbecuing realistic with its fast heat-up times and relatively simple cleaning. This makes it a great buy for families as well as keen entertainers. 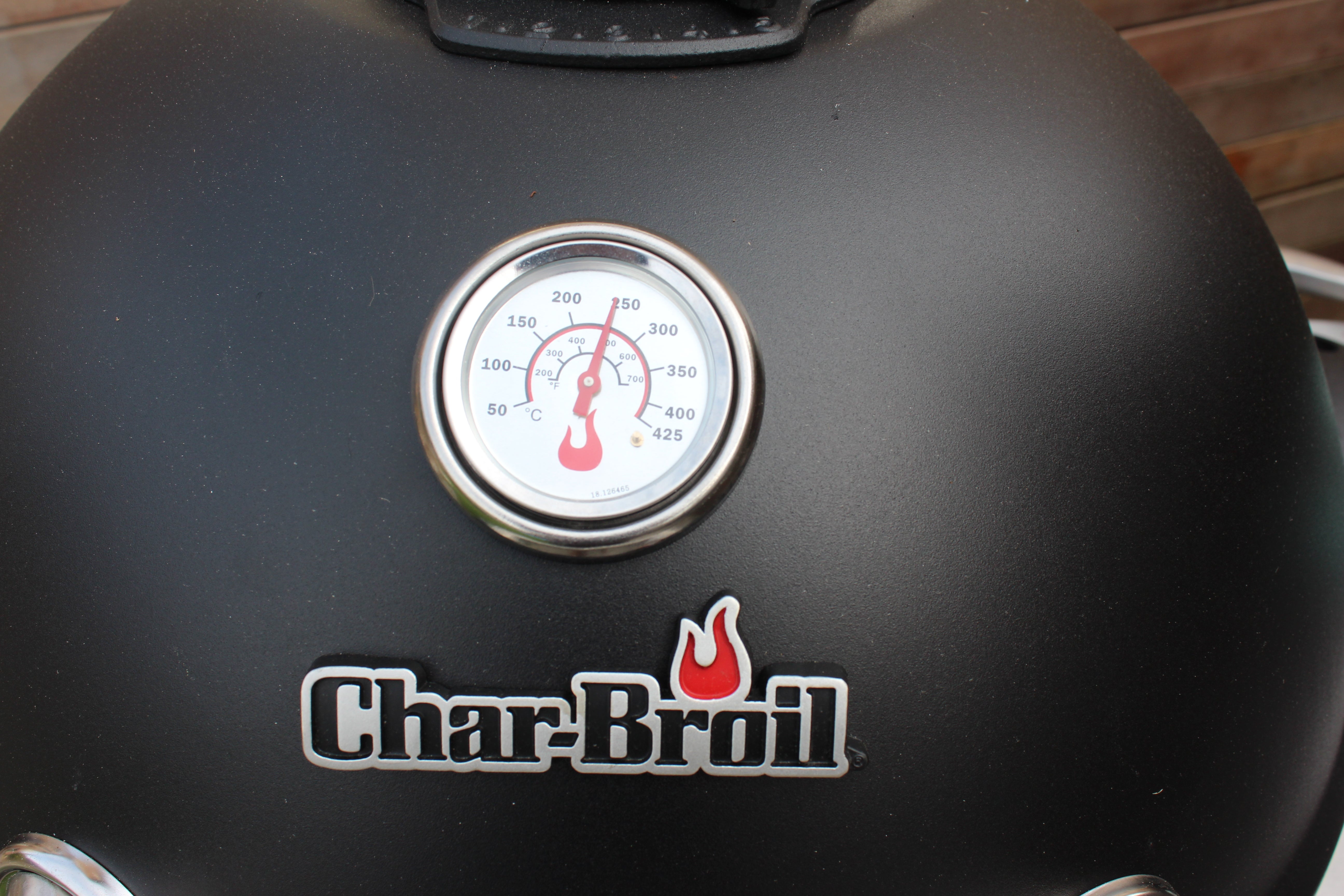 Almost guaranteed to turn anyone into an outside cooking convert.