Given the frankly dire – though apparently slowly improving – financial state of the AV world right now, it takes some pretty serious cahones to launch a new home electronics brand into the UK. So let’s give it up for Cello: a new name in town that far from just dipping its toe in UK waters is diving in headfirst with an array of actually quite innovative TVs.


One such innovator is the C1973F IPOD. As you can probably guess from this name, it’s a 19in screen with a built-in iPod dock on its upper edge. But startlingly that’s not the end of its story, for the TV also carries a built-in DVD player. In other words, it’s potentially an ideal one-box solution for a second room where having piles of separate kit lying around just isn’t practical.


Teenage children, in particular, will probably be seriously chuffed should they find such a utilitarian, gadget-friendly TV tucked under the Christmas tree come December.


The more observant among you may have noticed by now that although I said the C1973F is a Cello TV, the photographs show an apparent Soundwave brand name emblazoned under the screen. But don’t worry; the Cello and Soundwave brands are actually one and the same. It’s just that different outlets use the Soundwave name rather than Cello.


I have to say that using two brands like this maybe isn’t the best way to establish Cello in the UK punters’ consciousness, but there you go. I’m sure the people in charge have their reasons. 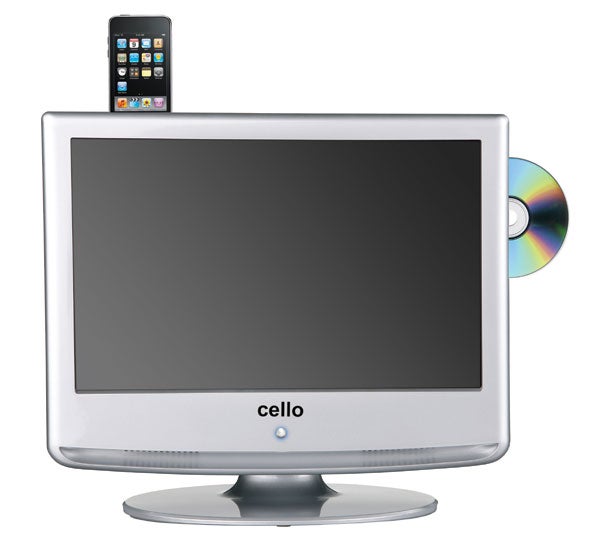 Getting back to the TV, while there seems to be no doubting the C1973F’s practical credentials, we can’t help but feel concerned about the set’s performance standards given a) Cello’s presumed lack of AV experience and b) the TV’s lowly £287 price.


Aesthetically the C1973F IPOD is reasonably attractive for such an affordable machine. The black bezel is glossy, and the silver-trimmed curve along the bottom edge adds a touch of cuteness to proceedings. Eco-friendly folk will appreciate, too, the presence of a ‘full power down’ button on the TV’s bottom rear corner.


Cello initially doesn’t seem to have compromised heavily on connections to hit the C1973F’s price point, either. HDMI, S-Video, composite video, SCART and D-Sub VGA options are all available, and there’s even a coaxial digital audio output so you can pipe digital sound from the built-in DVD player to an external multi-channel AV receiver.


The only disappointment with the set’s connections is that they don’t include a USB port or a component video input. I guess Cello could argue with some justification that having the iPod dock gives you a perfectly acceptable alternative to USB for getting multimedia files into the TV.


The lack of component video support, however, calls into question the TV’s claim of HD Ready specification, since part of that spec requires the provision of a component video input.


In truth, it’s unlikely many people – just old Xbox 360 owners, for the most part – would want to use a component feed anyway in these HDMI-driven days. And you may be able to get component feeds into the screen via a suitable adaptor and the VGA port. But if this is the case, it would have been appreciated if Cello could have included a relevant adaptor in the package.

Checking out the C1973F’s other key specifications, we find a claimed contrast ratio of 850:1, a claimed brightness of 300cd/m2, and a native resolution which, at 1,440 x 900, is actually much higher than anticipated.


However, before HD fans start punching the air and getting all unnecessary, if you apply a bit of maths to the PC friendly 1,440 x 990 resolution, it works out to a native screen ratio of around 16:10, rather than the 16:9 we’d usually expect from a widescreen TV.


This ‘squarer’ native widescreen shape isn’t unique; we’ve witnessed it on a few other sub-26in TVs in the past too. But as you might expect, it occasionally has a disturbing impact on a video picture’s appearance, leaving widescreen images either looking squashed, or as if their top and bottom was missing. Hmmm. 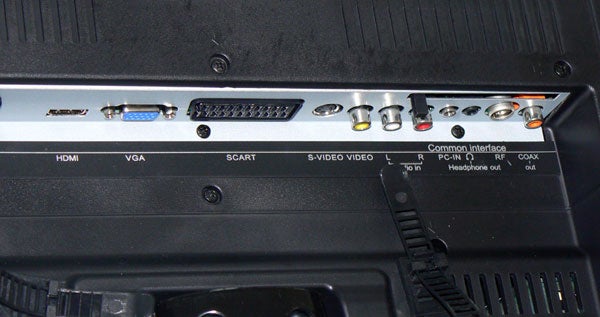 Heading into the C1973F’s onscreen menus immediately sets my teeth on edge. For they fall into the classic, utterly stupid trap of being so small you can barely read them unless you stick your nose right up against the screen.


The remote control is a very hit and miss affair, too. On the upside it’s large and spaciously laid out, with easy to access DVD playback buttons at the bottom. But on the downside it’s extremely light and plasticky, and some key buttons are both poorly labeled and ill positioned, not falling to hand or eye at all readily.


Straining my eyes to explore the C1973F’s onscreen menus uncovers precious few feature surprises, as is probably to be expected given how much the set has already offered up for its sub-£300 price point. The only things worthy of even a passing mention are a noise reduction system, and a passable selection of themed picture presets (including Game, Sport, and Movie options).


Checking out the C1973F’s basic picture performance first, from HD (up to the maximum supported format of 1080i) and Freeview sources, it’s clear pretty quickly that it’s nothing to write home about.


Particularly disturbing during any sort of dark scene is the amount of backlight seepage you have to put up with. A grey line of light around a cm thick – or more – spills across the picture along the top and bottom edges, sometimes really distracting you from what you’re watching.


The screen’s colours aren’t anything special either, looking slightly muted generally, and suffering a few noticeably unnatural looking tones, especially when trying to show rich reds and blues. Skin tones, too, tend to look either a bit pasty or slightly over-saturated.

Some of these colour issues at least, can be laid at the door of another problem – an underwhelming black level response, which finds dark scenes looking cloudy rather than containing any nice, inky blacks.


To be fair, the C1973F’s black level response isn’t disastrously bad – I’ve certainly seen worse. But it’s markedly less impressive than that of some other small TVs we’ve seen recently, such as LG’s 22LU5000. Especially when you also take into account the backlight seepage issue noted earlier.


Another area where the C1973F is average is motion clarity. Watch any fast-paced sport on the screen and the athletes noticeably lose resolution as they pass across the screen.


This is, of course, a very common problem with LCD TVs, especially cheap, small ones. But that doesn’t alter the fact that in an ideal world, at least, it would have been nice to find the TV doing a little more to combat the problem. Especially as the blurring can leave even HD sources looking far less sharp and detailed than we’d like.


Actually, even when HD images are fairly static they don’t look significantly sharper, to my eyes, than the pictures from a good quality standard-def DVD. Still, it’s not particularly realistic to expect any 19in TV – never mind a cheap one – to be a showcase for the high definition format, so I don’t think it’s fair to dwell on this point too much.

Rather more important for most of the C1973F’s target market will likely be its standard definition handling. And in this respect it actually does reasonably well, at least to the extent that it rescales standard definition to its native resolution without emphasising/adding video noise, or – thankfully – making the picture’s aspect ratio look uncomfortable or forced.


The C1973F’s DVD deck is respectable, too. For a start, the side-mounted tray has a label on it telling you which way round your discs should be when you present them to the slot – a simply but genuinely helpful trick. Also, unlike the DVD-carrying Ferguson F2620LVD we tested back in March, the C1973F’s DVD slot will actually suck in a disc that’s presented to it regardless of whether the TV is already switched to DVD mode.


The deck can handle SVCD, VCD, CD, CD-R, CD-RW, picture CD, HD-CD and WMA discs as well as DVDs – though DivX isn’t on the menu.


I was rather perturbed to note that the ‘TV Type’ setting in the DVD deck’s menus was set to 4:3 LetterBox when I got the C1973F out of the box, rather than 16:9. But otherwise DVD playback is straightforward, and delivered without generating the sort of MPEG or grain noise that’s always a worry with cheap DVD decks. 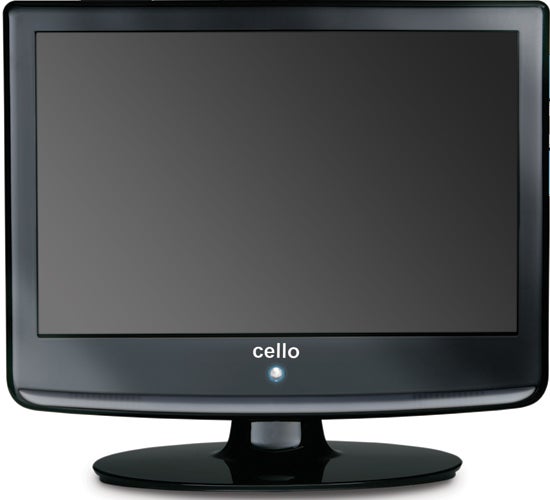 Next on our test list, of course, has to be the iPod dock. Slotting my iPod nano in there – apparently all iPod and iPhones are supported – immediately causes the TV to switch to its iPod channel and connect with my player. I can then use the dock to charge the nano, and playback songs or movies through the TV – complete with track details appearing on the C1973F’s screen. What’s more, I can control all the key functions of my nano using the TV’s remote control.


Now for the bad news. First, the screen uses the same puny onscreen menu/information text size found while trawling the setup menus, making it ridiculously tough to read all the options/track details from any more than a metre or so from the screen. It’s enough to make you wonder if Specsavers have somehow sponsored the TV, in a bid to get more eye-strained punters through the door.


Second and worse, the TV’s audio really is very average. Its claimed 2x6W of power delivers a thin, compressed and sibilant soundstage with iPods that sounds almost like the TV is adding another level of compression on top of that applied when you originally ripped your music.


The TV’s sonics are a bit more comfortable with CDs and TV/films, though things still sound muddy under the slightest duress, and you’ll be wincing regularly if you turn the volume too high.


The Cello/Soundwave C1973F certainly does a lot for its relatively budget price. It’s just a pity that it doesn’t do anything particularly well.


Still, while I personally might question the worth of such a performance-lite product, I have little doubt that there are plenty of casual users out there who will likely consider a basic performance level a perfectly acceptable price to pay for the C1973F’s extreme convenience factor.


I’d also say the C1973F is at least interesting enough to make me keen to get my hands on Cello’s new TVs that allow you to record TV onto SD cards… Watch this space.