Carrera has built itself a good reputation for general-purpose PCs, from budget first time buyer machines through to high-end performers for the enthusiast. This latest offering, the Focus Extreme FX-53, is definitely at the high-end, being based on AMD’s latest Athlon 64 FX-53 processor. This 64bit chip is aimed at the top of Intel’s Pentium 4 Extreme Edition range, squarely targeting power gamer market.


AMD’s Athlon 64 processor, introduced last year, has proved popular as a way of ensuring sound future-proofing in your PC, without having to take a performance hit. The 64bit architecture of this processor is fully compatible with the 32bit software available today so it can still perform well enough to compete directly with the 32bit competition.


The FX-53 is the high-performance variant of the Athlon 64, complete with 1MB of Level 2 cache and integrated dual channel memory controller. It’s a faster clock-rate version of the FX-51, running at 2.4GHz, and is intended for power users and gamers. Carrera has taken this on board in the design of the Focus Extreme FX-53, by matching the chip with high performance hardware in the graphics and storage sub-systems.


The Focus Extreme FX-53 is built into one of Carrera’s glossy black and clear acrylic midi-tower cases which, apart from looking good, offers an unusual amount of internal expansion. There are five 3.5in drive bays inside, only two of which are used in this configuration, with a further four 5.25in and two 3.5in external bays.


In the top two 5.25in bays are one of the latest NEC ND-2500A dual-format DVD writers and an accompanying 16-speed DVD-ROM drive. The ND-2500A is one of the first drives to boast eight-speed DVD recording and four-speed DVD rewriting for both + and – formats.


The FX-53 processor sits in an Asus SK8N system board, alongside a full 1GB of matched 400MHz registered DDR memory. The SK8N includes a Serial-ATA RAID controller and good use has been made of this with two 80GB Samsung hard drives, striped in a RAID 0 array for extra speed.


The graphics subsystem is led by a GeForce FX5950 Ultra card from MSI. This is currently the top of the range nVidia chipset and should ensure smooth frame rates in all the latest games. It also looks the part, with a wraparound heatsink and twin, red-illuminated cooling fans. You can only see the lights with the case side removed, so there’s an argument for a viewing panel – if you’ve got it, flaunt it.


The video signal is sent to 19in Neovo LCD monitor from AG. This brand is relatively new to the UK, but is well made using a high-quality LCD panel. It includes DVI as well as analogue connection and cables for both are supplied. The power supply is integrated into the monitor, so there’s no ‘black brick’ under the desk. The screen has a free-tilting stand, but no swivel. Controls are aligned at the bottom right, along the edge of the panel’s surround.

Sound comes from a Creative Audigy ZS. This is a 7.1-channel card which pumps its output to a matched set of Inspire T7700 speakers. The sound quality of the Audigy ZS card is extremely good, with low signal-to-noise and high clarity throughout the audio spectrum. Although this speaker set has the full complement of channels, it doesn’t do the sound card full justice. While treble and bass frequencies are reproduced well, there’s a dullness and lack of presence to the mid-ranges. That said, this is likely to be less of an issue when watching movies and playing games, which is where a setup like this is aimed.


So how does it go? The simple answer is, like the clappers. If you couple a high-performance processor with a rabid greyhound of a graphics card, you would expect little less. The general-purpose SYSmark 2002 benchmark produced a score of 336, in itself a reassuringly good result, but when you look at the Internet Content Creation module of the test, which produced an index of 433, you get an inkling of how the system will perform on graphics-intensive applications.


The whole system comes with a three-year, on-site warranty, with a call-out of between two and five working days. In addition, though, the Neovo monitor is covered separately by a three-year, next-day, swap-out guarantee of its own. This is a good package in comparison to Carrera’s main competitors and will cover you for most of the system’s likely service life.


Carrera has priced The Focus Extreme FX-53 fairly, but at just under £1,900, it’s still a lot of money. However, you do get one of the fastest production PCs currently available, and potential bragging rights over your mates. This is a system that would be ideal for heavyweight, graphics-based applications such as video editing and could easily turn its hand to music creation. But the Focus Extreme FX-53 is really at home with heavyweight, 3D games. Carrera bundles both game pad and joystick as if to emphasise this, but ultimately, if you’re a serious enough gamer to buy a machine like this, you’ve probably already got a whole arsenal of controllers.


Carerra has made the most of AMD’s new Athlon 64 FX-53 and built a super-fast PC. If you’re a serious gamer and want a truly high-performance system to play on, this machine is definitely worth considering.

To compare these results to a 3.4GHz Intel Pention 4 Northwood system click here 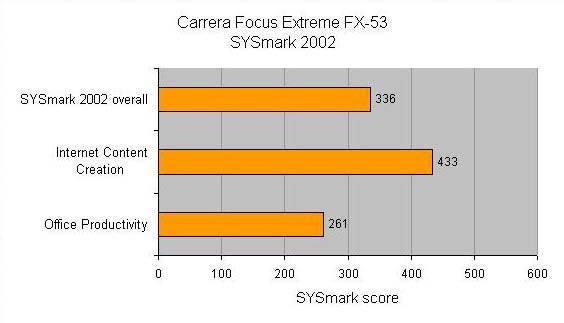