The DM100 is the most recent addition to Canton’s lauded soundbase range, joining the DM55 (which replaces the Canton DM50) and a new glass-topped version of the Canton DM75. As the largest of the trio, the DM100 is designed for bigger rooms and TVs, and since it’s designed to sit under your screen it keeps clutter to a minimum.

Available in black or silver, the DM100’s design is classy and discreet. From the sofa, our sample looks like a solid black block, blending seamlessly with the TV. The only visible details are a tiny power LED and a subtle Canton logo. There’s a large three-digit display on the front, but this disappears after a few seconds, leaving the front almost completely blank. 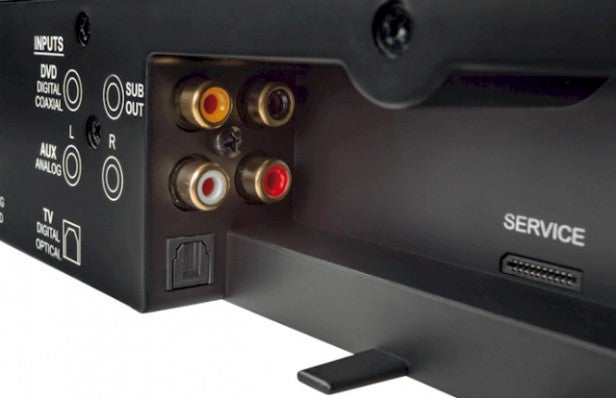 At a metre wide, you’re getting a lot of soundbase for your money, but at 69mm it’s surprisingly slim for such a large soundbase. You don’t have to place it under your TV – it’s just as happy nestling on a shelf below if your set is wall-mounted. It’s the perfect size for my 55in TV, but it will happily support bigger – provided the weight doesn’t exceed 40kg.

Take a gander at the rear panel and you’re greeted by a decent selection of sockets, despite an obvious omission. On the digital side, there’s optical and coaxial inputs, while analogue inputs include stereo RCA input and a subwoofer output. There’s apt-X Bluetooth too.

The lack of HDMI inputs might be a deal-breaker for those hoping to connect Blu-ray decks and TV boxes directly, but the single-cable connection makes things a lot cleaner and easier.

This model also boasts several upgrades from the previous DM soundbases. One of these is a new Bluetooth select function that automatically switches to Bluetooth when it detects an audio signal.

A helpful automatic on/off function fires up the unit when it detects a signal on the optical or coaxial inputs and shuts down after 30 seconds if there’s no signal. That means you need only turn off your TV before going to bed for the soundbase to automatically follow suit.

Another new feature is an Eco mode that automatically goes into standby if a signal isn’t detected for an hour (although it’s disabled if auto power is activated).

Joining the Stereo and DTS TruSurround from previous models is a new Voice mode that gives speech frequencies a boost, and a Hotel mode that lets you set a maximum volume limit. Two-channel Dolby Digital decoding is also on board.

Installing the DM100 couldn’t be simpler. Once you’ve hauled your TV on top, it’s simply a case of connecting its optical digital output – anything you watch will play through the Canton. Just make sure your TV’s digital output is set to “PCM”.

Three EQ modes cater for different placement options. Select EQ1 if it’s freestanding on a sideboard with the TV wall-mounted above, while EQ2 is used when the TV is placed on top; EQ3 caters for rack or shelf placement. There are also lip-sync adjustments and dynamic range control.

It’s all controlled using the DM100’s high-quality remote, which boasts a minimal array of well-labelled rubber keys. The handset is chunky and robust, sporting a fetching black and silver colour scheme. There are up/down keys to cycle through the inputs and buttons for sound modes, tone controls and Bluetooth pairing.

To access the advanced sound settings, hold down the “play mode” or “sound” buttons and use the volume keys to turn them on and off. The setup menu is predictably basic on the three-digit display, but it’s better than the cryptic flashing lights used by other soundbases.

For day-to-day operation you can carry on using your TV’s remote thanks to the IR learning function, just one of many user-friendly features that make the DM100 a pleasure to work with.

Like the DM50 and DM75 before it, the DM100 is an outstanding performer. At first you might struggle to get your head round the sheer scale of the DM100’s sound, which doesn’t seem possible from such a slender unit.

The Canton’s huge sound is largely down to its incredibly deep and muscular bass. Play Looper on Blu-ray and every time Joe blows away a victim, the blunderbuss shot has palpable weight, beefed up by those four potent subs.

When Joe and Seth visit the club, the bassline of the pounding music effortlessly fills the room. And when Bruce Willis escapes his captors before zapping himself back in time, the soundtrack’s descending bass notes will rattle your ribs. You get the picture.

If anything, the DM100’s bass reproduction is too powerful. During Looper’s louder moments I found it a tad overpowering, boomy even, but after trimming the bass level to around -2 or -3 it sounded far more cohesive.

If the issue persists, you might prefer to add an external subwoofer (in which case the DM100 rolls off low frequencies at 80Hz) – it’s great that Canton gives you the option. However, with judicious tweaking most people should be perfectly happy with the Canton’s built-in subs. Once properly integrated, bass sounds fast and agile, starting and stopping on a dime.

But the DM100 isn’t all about that bass. First-class mid-range and treble reproduction lends impressive clarity and vigour, heightening the excitement when the action hots up. The snap of gunfire is fierce but never coarse, plus every scene is teeming with incisive top-end detail.

Take Looper’s opening shot, for instance. As Joe waits in the field for his first victim to appear, the buzz of insects in the cornfield and the ticking of his pocket watch are crisp and clear. The Canton also teases out textures in voices and adds refinement to the score. It’s delightful.

Switching from stereo to surround mode, I noticed the soundstage opening up and spreading beyond the physical dimensions of the unit. That’s all you can really ask for from a virtual surround mode, unless you start dabbling in pricey beam-projection technology. The Canton doesn’t come close to true surround, nor did we expect it to.

Voice mode is a welcome inclusion. One of the problems I found with the DM100 is that there’s a discrepancy between loud and quiet parts of a movie. I found myself having to turn up the volume to hear dialogue properly (particularly Jeff Daniels’ mumbled tones) but when an explosion or nightclub scene kicks in it’s far too loud, triggering a panic-grab for the remote.

However, the Voice mode helps by boosting dialogue so you don’t have to crank it up quite as much. Good job, too, as the tonal quality of its dialogue is top-notch. The combination of a solid mid-range, expressive treble and subtle bass depth makes speech sound almost life-like, particularly Joe’s narration.

It also helps when watching TV, making actors’ voices come through loud and clear. There’s still a bit of a jolt when the theme music kicks in, but in general the DM100’s crisp, powerful sound will enhance your TV viewing pleasure tenfold.

The DM100 also does a fabulous job with music, thanks to its sophisticated hi-fi approach. The use of separate tweeters, mid-range drivers and subs gives you a lovely full-range sound, delving deep into the low frequencies without sounding tubby and sprinkling music with silky treble. There are big dynamics, focused vocals and a sense of refinement that you simply don’t get from any other soundbase.

Should I buy the Canton DM100?

If you own a whopping great TV and want to boost its sonic potential, there aren’t many better ways of doing it than the DM100. With its immense power, gorgeous detail and snappy dynamics, it’s the closest you’ll come to a proper home-cinema experience without buying a receiver and 5.1 speakers. There are a few minor sonic issues, but nothing that can’t be ironed out with a little tweaking.

What’s more, it’s a cinch to use and build quality is top-notch. Yes it’s expensive but the DM100’s performance, design and simplicity are so impressive that you won’t regret splashing out.