Canon has had considerable success with its range of dye-sublimation dedicated photo printers. When it released the Selphy ES1, with its innovative print rotation, it got extra marks for novelty, but can the third model in this series maintain its attraction?


Rather than the earlier model’s square, angular lines, the Selphy ES3 is full of curves, much more like a handbag or a DAB radio. The curved carrying handle makes it obvious this printer is intended to be carried around, though it’s more transportable than fully mobile, as there’s no battery pack, even as an option. 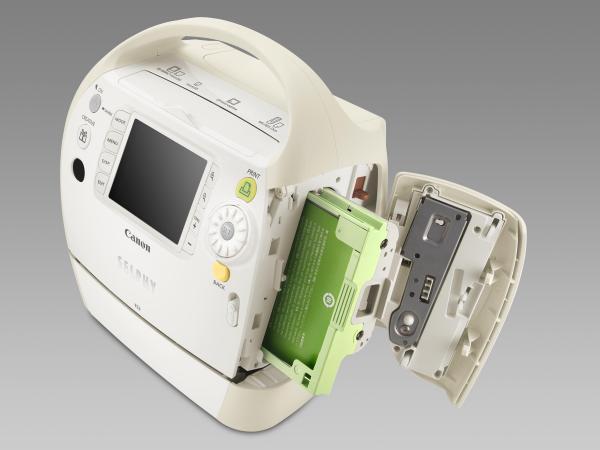 Beneath a slide-open cover on the top of the printer are sockets for the common memory card types, but also, under a finger slide, a custom-made socket for microSD cards, showing the increased popularity of this format.


The 90mm LCD screen is a good size for previewing photos and gives plenty of room for Canon’s menu system. We’re sure it’s the result of many focus groups, but to our way of thinking there are rather too many controls on the front of this machine. As well as the power button, one for print and one to step back out of a menu choice, there’s a big button for creative additions to photos – things like frames and speech bubbles – and a total of eight buttons down either side of the display.


As well as these, there’s one of Canon’s rotary dials, which can also be clicked left and right to scroll through photos and pressed in the middle to set a selected option. Although it would add to its cost, this printer seems to be crying out for a touch-screen to simplify the control functions. 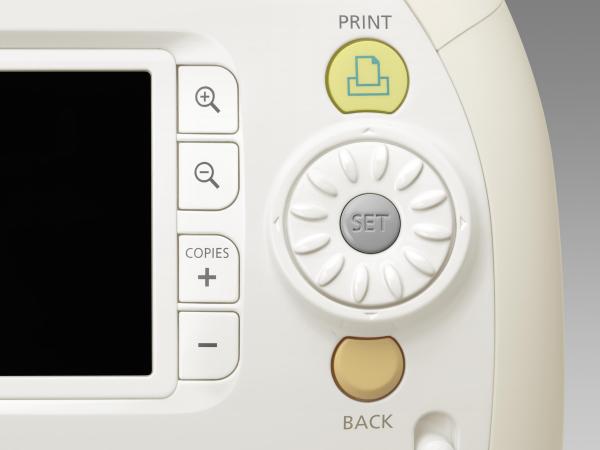 The combined film and photo blank cartridge, which can take up to 50 blanks – though a cartridge for just five is supplied in the box – slides in at the right, under a flip-open side cover. In the left side are sockets for a USB connection to a PC and for a PictBridge camera.


To use the printer in a standalone mode, the only setup needed is to replace the plastic blank in the cartridge slot with the supplied cartridge. If you want to print from a PC, you’ll need to connect the USB cable and install the Canon software, which as with other Selphys, comprises Photo Express LE and ZoomBrowser EX.

We find the ES3’s peculiar mechanism, where print blanks are fed out from the cartridge through a slot near the bottom of the printer, rotated through 90 degrees and then fed back in a total of four times to build up the colour photo image, is quite long-winded. So, although Canon claims a print speed of 55 seconds, we assume this excludes the rotation and preparation time, as we couldn’t produce a print in under 75 seconds. This is on a par with HP photo inkjets, but twice as long as from Epson’s.


The end product, however, is completely dry and ready to view and the level of detail in the 600 x 300dpi images excellent. Colours are vivid but not unnaturally so and the only place they’re let down is in areas of shadow, where considerable detail can be lost. You can of course adjust for this, but most people will use the default settings.


Because the standard postcard blanks have perforated edges, which you fold and tear off, you can lose detail at the edges of your images, which get ripped off with the waste tabs. 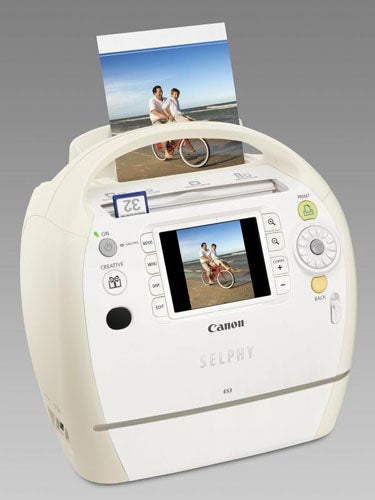 One of the potentially most attractive features of the ES3, but one we couldn’t evaluate, is printing in silver and gold. Canon has developed film cassettes which offer either of these two metallic colours in addition to the bands of cyan, magenta and yellow dye. These should be ideal for putting frames round photos and producing other special effects, but as yet there are no silver or gold cartridges available for the machine.


With all the whirs and buzzes the printer makes while feeding print blanks to and fro, it’s not that quiet. We measured peaks of 61dBA, so it could be irritating to other people trying to work or watch TV while you’re printing.


With all the consumables integrated into one cartridge, the cost of running the Selphy ES3 very much depends on the price you can find Canon’s Easy Photo Packs for. They’re available in 50 print and 100 print capacities, and pricing the 100 print pack, we couldn’t find it for less than £21.95, which gives a cost per print of 21.95p.


This is pricey by today’s photo printing standards, with the HP Photosmart A636, tested recently, producing a print for 10.74p, less than half the cost from this machine. Print cost is a major factor in all photo printer cost of ownership, so Canon needs to reduce this, if it’s going to remain competitive.

Although we were impressed with the initial release of the Selphy ES1, the ES3 is not quite so appealing. We think the control panel is too busy, the rotating paper design continues to slow down printing and the running costs are too high. While there’s little doubt the images it produces are excellent overall, its cost of ownership could make you think twice.