Of the four major printer makers, only Canon has chosen not to use ink-jet technology for its standalone photo printers. It has made a considerable success of the thermal dye-sublimation technology it bases its Selphy range of printers around and one of the latest to join the range, the Selphy ES20, offers a wide range of features, built into its attractively styled case.


If you’re used to photo printers being small squat boxes with large paper trays sticking out the front, the ES20 may come as some surprise. Its vertical design – it’s as high as some all-in-one machines – means it has a very small footprint. The integrated paper and ink film cartridge slides in at the side in a simple, mess-free installation and provides enough of both consumables to produce 50 full-colour prints.


The photo blanks built into the cartridge are loaded in landscape orientation inside the printer, so you don’t need to carry a pack of paper with you when travelling. That’s fine, except that the ES20 must feed the paper back and forth four times in a portrait orientation to print each colour photo. 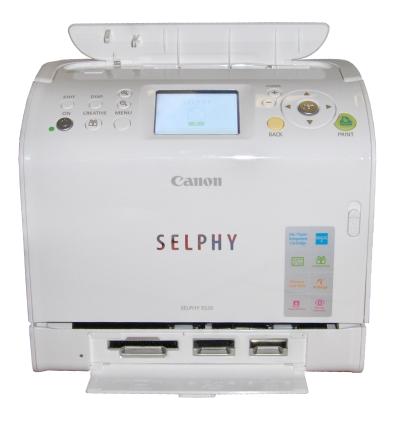 To achieve this, the printer uses the technique pioneered in Canon’s earlier ES1 machine, which feeds the paper part-way out and then turns it through 90-degrees before starting to print. Virtually everyone who sees this manoeuvre is impressed and it’s certainly a novel solution to keeping the paper protected when the printer is not in use.


The control panel of the Selphy ES20 includes a 76mm colour LCD and assorted buttons to handle not just simple printing but additional features like red-eye removal and adding simple frames and even speech bubbles to photos.


At the bottom of the front panel, behind a fold-down flap, are three separate memory card slots, which between them cater for all the main types. Around the side are similar sockets for USB 2.0 connection to a PC and PictBridge connection to a camera. The one method of connection missing, which was available in Canon’s earlier ES1 model, is the pull-out, vacuum cleaner-style, PictBridge cable for direct camera connection.


There’s a sprung carrying handle built into the top of the printer and a pop-up cover to the paper-out hopper. This cleverly pops open automatically, if you start printing without opening it manually, first.

If you want to use the printer with a PC or Mac, simply install the application software and driver and connect the cable. The driver works like any other, though options are limited to what’s necessary for photo print.


Many people will use the printer in its standalone state, though, and some may add the optional lithium ion battery, good for 50 photo prints per charge, and the Bluetooth adapter which gives the ES20 wireless capabilities.


Each print has to make four passes through this printer, to build up the yellow, magenta and cyan colour layers and a clear overcoat to protect the image. Even so, we produced a print in 73 seconds using a PictBridge connection from a camera and slightly longer, 79 seconds, printing from a PC or memory card. 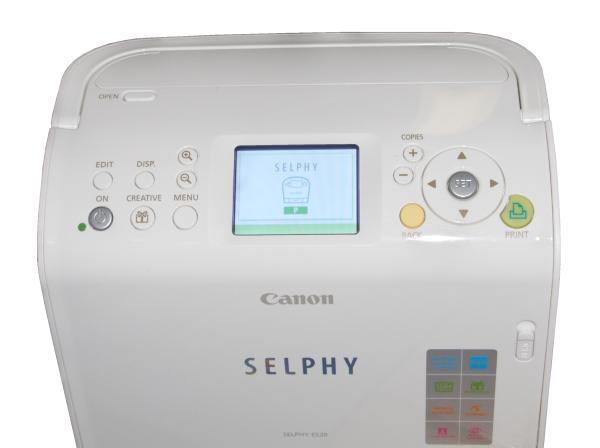 While these times aren’t spectacular, with the Epson PictureMate PM290, for example, finishing in just 43 seconds, nearly twice as fast, it’s not nearly as entertaining to watch as the Selphy. One visitor to our lab said it was like watching the photographs develop before your eyes.


As dye-sublimation print is a dry process, photos are usable as soon as they come out of the printer and the postcard blanks Canon provides are marked out with areas for a message, address and even a postage stamp on the back. Print quality is good, though by default colours are dark and shadowed areas almost completely black, losing quite a lot of detail.


One of the main advantages of dye-sublimation printing is that there are no visible dots in the image. Even under a magnifying glass, it appears like a traditional silver halide photograph, giving a smooth transition between colours and a fine level of detail. 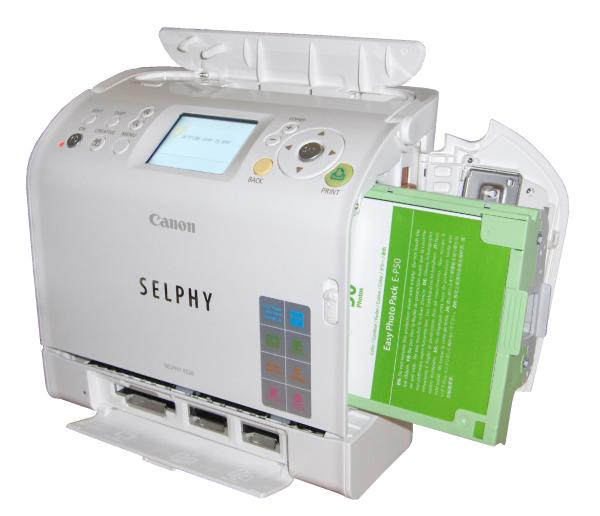 There’s only one consumable in the Selphy ES20, a combination cartridge containing paper and film for 50 colour prints (a 25 print black and white cartridge is also available). The 100 print box, which is cheaper per print, contains two cartridges. The cheapest we could find this for was £15.50p, giving a cost per print of 15.5p. This is slightly more than the cost of recent Epson and HP photo printers, but we’re only talking a penny per print, so this shouldn’t worry you too much.


This is a very neat and functional standalone photo printer, where you don’t need to carry a separate pack of paper, but you will need the optional battery pack and charger if you intend to use it away from the mains. Prints may need some brightness adjustment, but overall its ease-of-use and convenience outweigh this.