Canon has had considerable success with its range of Selphy dedicated photo printers, which use dye sublimation, rather than the more usual inkjet. Its latest machine in the series, the ES1, refines the technique and provides extra features which should make it still more convenient to use.


Unlike earlier Selphy printers, the new machine sits vertically, more like a small toaster or transistor radio. Full controls for the printer are mounted on top, with a set of buttons on the left-hand side and a control dial and other buttons on the right. In the centre is a 63mm LCD screen, which can be used to preview pictures from memory cards and to navigate the printer’s menus.


One of the key innovations in the new model is the photo cartridge, which combines photo blanks with rolls of the thin ribbon which holds the multicoloured dyes transferred during printing. This now slides in at the side of the machine and you no longer need to connect a bulky paper cartridge to the front of the printer. 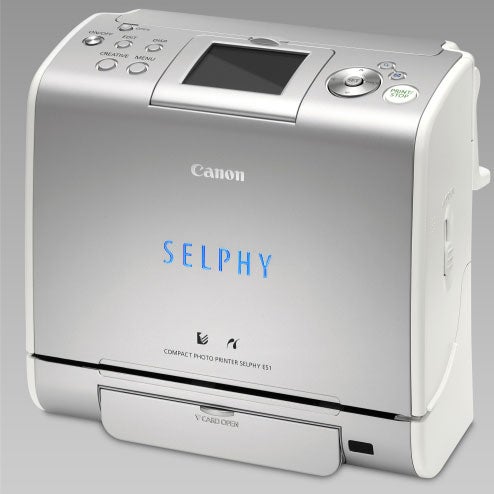 At the bottom of the front panel are sockets for memory cards or to plug-in a PictBridge cable to your camera. For most people, though, a small cover on the left-hand side of the printer gives access to something more useful. The printer includes an integral USB cable on a spring-loaded retractor, complete with the miniature USB plug which fits most modern digital cameras. We had no trouble using this with HP and Ricoh models we tried. Also at the side is a USB socket for connection to a PC.


A flip-up hatch at the top stops dust dropping into the print mechanism, when the printer is not in use. Dye sublimation printers are particularly sensitive to particles of dust, so it’s important to close this hatch when the printer isn’t in use. At the back is a hatch to take an optional lithium-ion battery, which should handle 50 prints on a single charge.


The ES1 is designed primarily as a standalone machine and to get it working this way, just plug the print cartridge into the side and close the cover. Push in a memory card – the card slots take all the common types, including MicroDrive – or connect a camera and you can print directly.

Using the printer’s control panel you can crop an image, perform basic editing, such as red-eye removal, and add simple effects, like sepia tints and speech bubbles. Browsing through images on a card, particularly if they are over 4-megapixel, can be a slow process, as the printer’s internal processor is not that quick.


If you want to print from a PC, Canon provides a CD of control software and drivers. The software comprises Zoom Browser, a handy – though basic – photo management and editing utility and Easy PhotoPrint. 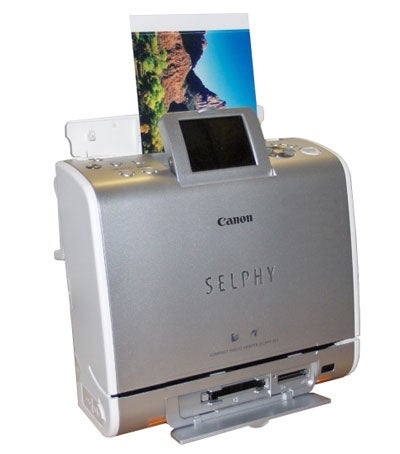 The Canon Selphy ES1 has one of the most amazing paper feeds we’ve ever seen on a printer. At the start of each print a 15 x 10cm blank is fed out sideways from the front of the printer and rotated by about 90 degrees. Then, since the printer can’t be certain exactly what angle the paper is at, it straightens it as it’s fed back in and out at the top of the machine, with the first layer of colour applied. It feeds the paper back and forth a further three times, to apply the other two layers of colour and a transparent cover layer, which protects the print.


Canon claims a print speed of 69 seconds for this printer and under test we saw prints complete in 75 seconds, which is pretty close. Since each print has to pass through the printer four times, this print speed is reasonable.


You buy a photo printer primarily for the quality of its prints and with the ES1 you’re buying a machine which can outperform most. The dye sublimation print is incredibly precise with very fine detail showing up clearly. We spotted some details in our test prints that we’d never noticed before and had to compare them with a magnified version of the image on-screen to prove they really were there… they were. 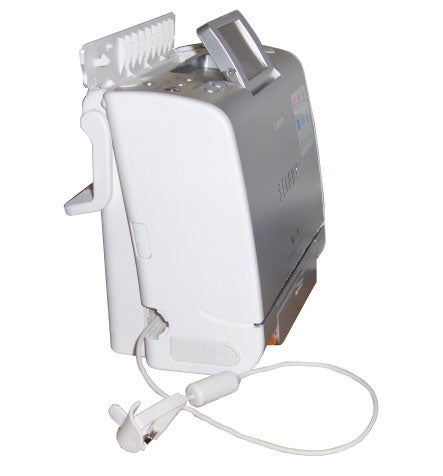 Colours come through strongly, too, but remain natural. The only problem, with default settings, is that images are a little dark in comparison with the originals. You can compensate for this from the printer’s control panel, but it’s a shame it’s not lighter by default.


Print packs come in 50 or 100 print capacities (though a 10-print ‘starter’ pack is supplied with printer), with prices of around £12 and £21, respectively. Using the higher capacity pack gives a cost per print of 21p including VAT. While not the cheapest prints on offer today, this pricing is competitive.


The dedicated photo print market is divided between two technologies: inkjet and dye sublimation. This latest dye sublimation printer from Canon proves once again that the technique can outperform its rival. Canon’s rethink of printer design, including its novel turn-the-paper-round technique, makes this a very effective, portable photo printer at an attractive price.