Photo printers that can produce ‘regular’ size prints without the need for a PC are becoming increasingly popular. Most of them, such as those from Epson and HP, are scaled-down inkjets, but Canon has taken a different route, offering a series of miniature printers based on dye-sublimation technology. The CP-500 sits high up inside this new range, but can still be had for just over £100 at street prices.


Dye sublimation uses a solid layer of ink on a very thin plastic film, which stretches the full width of the print. This is held in a plastic cartridge which has repeating bands of cyan, magenta, and yellow and a transparent covering layer for protection of the print. Each print has to pass through the printer four times, to take the three colours and the protective layer, which are transferred in turn to the print cards, using a thermal print head.


The head also runs the full width of the print, and the dye-based ink sublimes – turns immediately from solid to vapour without passing through a liquid phase. The vapour condenses on the paper, so although the printer is rated at 300dpi, there are no visible dots in the process. It’s what’s called continuous tone. 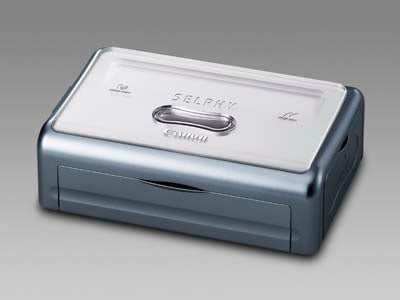 The Selphy CP500 is about the size of a thick paperback, though there’s a separate black power supply block and a cassette carrying the 6 x 4-inch postcard blanks, which clips in at the front. You also need to allow a space on your desk at the back of the printer, to accommodate each card as it’s fed out during the printing process. Various other paper sizes, including credit card, are available, with separate cassettes and ink film cartridges for each.


A sprung door at the side gives access to the ink film cartridge, which slides in easily, though you have to be careful not to snag the thin carrier film. At the other side are sockets for USB 2 connections to any PC and to a digital camera conforming to the DirectPrint or PictBridge standards. Using this link, the printer doesn’t have to be connected to a computer to be able to generate prints.


There are no controls on the top of the machine, just a small window showing the size of paper cassette fitted. This glows blue around its edges when the printer is powered up and flashes when it’s printing.


The Selphy is quite capable of printing from graphics files on your PC and Canon’s ZoomBrowser software provides photo management functions, though it doesn’t always find all the folders on your drives, let alone all the pictures within them.

The printer driver itself is a simple affair – it doesn’t need to be as complex as a conventianal A4 printer, which has to cope with many different paper sizes and print options. Here, you’re printing to a standard size paper and there is little to select other than portrait or landscape orientation. You can alter the colour saturation, but that’s about it.


Making four passes through the printer slows down the overall print time for the Selphy CP500, but we still saw a borderless print emerge in 46 seconds when we printed from a PC. We also used a Canon Ixus 40 to print direct and were surprised that this took 37 per cent longer, at 63 seconds. Both times compare well with inkjet photo print times, though, which can hit 150 seconds for the same size print.


Print quality is little short of stunning. Free of the inherent dottiness of an inkjet, the Selphy is able to bring a clarity not normally seen on home prints and there’s sufficient definition in the 300dpi output to reproduce even fine details exceptionally well. 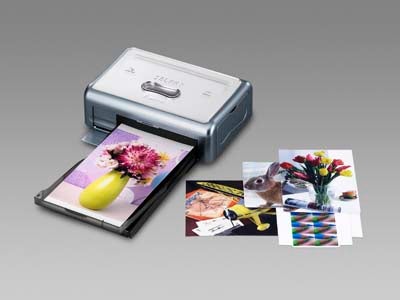 You might expect a printer like this to be virtually silent in operation, and the printing process itself is little more than a slight crackle as the ink is transferred from the carrier film. Driving the card backwards and forwards for each pass of the print head, though, involves a high-pitched whine from the feed motors, which is at an annoying pitch and was measured at 59dBA – not quiet.


The printer comes with cards and ink for just five prints, which seems stingy, though a consumables pack for 36 prints costs just £11, giving a cost per 6 x 4-inch print of just over 30p. This isn’t bad, given typical costs for inkjet photo printers of up to 50p per print. It’s arguably more convenient to buy all your consumables together in a matched pack, too, though you would need around three Canon packs for the same number of prints as a single inkjet cartridge would give.


If you want a printer specifically for printing photos and are never going to want to print above 6 x 4-inch prints, the Selphy CP500 is cheaper to run, quicker to print and produces higher quality images than any inkjet photo printer we’ve yet seen. It may be unconventional, but it does a great job.