The Canon PowerShot SX500 IS represents something of an anomaly in that it straddles the gap somewhere between ultracompact and superzoom. The first thing that strikes you about it is the size; it’s a very small camera, and yet within its diminutive body Canon has somehow managed to engineer a 30x optical zoom. In terms of focal range this pushes the SX500 beyond the traditional 16-20x reach common to many travel compacts and well into superzoom territory. 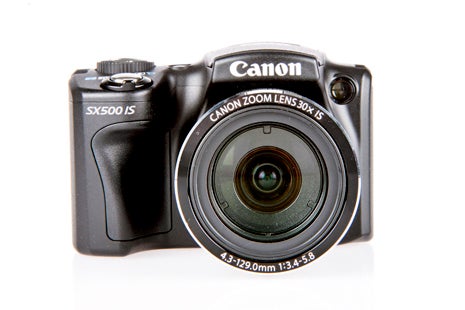 The SX500’s 30x optical zoom offers the 35mm focal range equivalent of between 24-720mm, which is plenty wide enough to take large group shots at the wideangle end or to fill the frame with faraway objects at the telephoto end. Maximum aperture at 24mm is f/3.4 rising incrementally to f/5.8 at 720mm. Neither is particularly fast, although given the engineering constraints incurred by cramming such a large focal range into such a small optic, this isn’t wholly unexpected.

Given the extended reach it’s good to know that the SX500 benefits from Canon’s own lens-based Intelligent IS stabilisation technology. This is designed to help keep images sharp at extended focal lengths and slower shutter speeds, where natural camera shake might otherwise show up as blurred images. And if 30x doesn’t sound like it offers quite enough telephoto reach then the SX500’s zoom can be further extended up to a maximum of 60x via Canon’s ‘ZoomPlus’ technology. It’s worth noting, however, that this involves an advanced pixel interpolation process, rather than anything purely optical, so don’t expect to achieve the same level of image quality when using it. 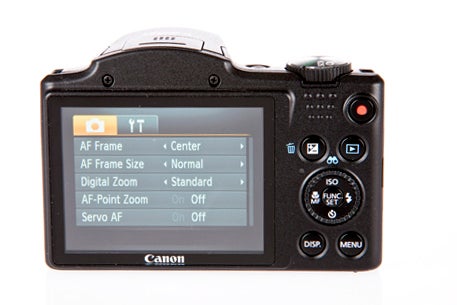 Behind the powerful zoom, the SX500 employs a 1/2.3in CCD sensor that offers 16MP of effective resolution. In addition to capturing images in the native 4:3 aspect, the SX500 can also be set to shoot in 3:2, 16:9 and 1:1 although as this requires the camera to effectively take a crop from the sensor maximum resolution does take a knock as these settings. The sensor is supported by Canon’s DIGIC 4 image processor, which aims to improve image quality and control noise at higher ISO settings.

Speaking of sensitivity the SX500 offers a somewhat limited ISO range of between 80-1600. Given that most compacts in this price bracket offer at least ISO 3200 (or even ISO 6400), it does suggest that Canon didn’t have much confidence in going any higher than ISO 1600 with the SX500. Then again, as has been well documented in numerous reviews in the past, small-sensor compacts tend to perform very badly these kinds of settings anyway, so maybe it’s for the best. 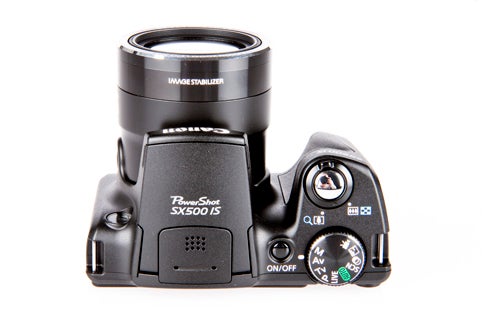 The back of the camera is fitted out with a bright and clear 3in, 460k-dot LCD screen which, given the small size of the camera, takes up pretty much the whole back and appears larger than it actually is. Unlike the vast majority of superzoom cameras there’s no optical viewfinder mind.

The SX500 comes equipped with a good range of exposure modes. Those who prefer to let the camera do all the work can take advantage of the Smart Auto mode and let the camera choose a suitable setting from over 30 pre-programmed scenes. Those who want to take more direct control over the camera will find the full range of PASM modes to hand as well. 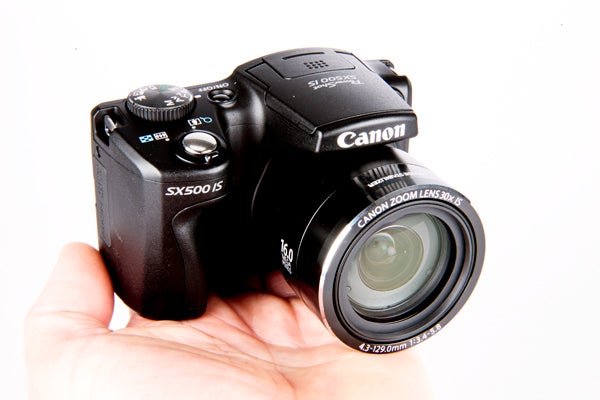 In addition, the SX500 also offers a range of Creative Filters with which it’s possible to add digital effects to your images in-camera without the need for a computer or any specialist software. There’s no Raw image capture though, which means the SX500 is strictly JPEG only – you do get a choice of resolution settings, however, should you be looking to conserve space on your memory card, or if you’re just shooting non-critical snapshots destined solely for the internet.

In terms of video capture, the SX500 does offer the ability to record 720p HD video capture, although there’s no option to record 1080p Full HD movies, which is a little unusual – not to mention disappointing – for a camera of this type and price.

While the feature set is mostly (HD video recording abilities notwithstanding) on a par with what might be expected of a £300 superzoom, the thing that really makes the SX500 stand out from its peers is its size – or rather its lack of size. In spite of its 30x optical zoom the SX500 IS remains an impressively small camera. 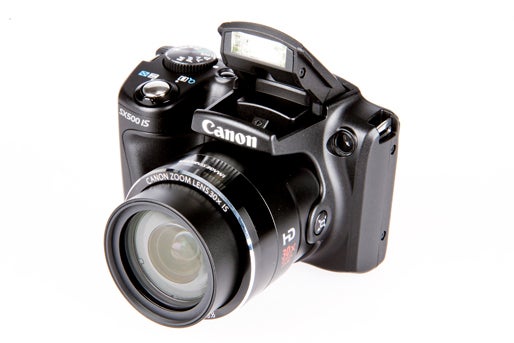 As mentioned on the previous page, one by-product of the camera’s diminutive body is that the 3in LCD screen takes up most of the back of the camera. There’s still enough room for a selection of controls though, with direct access to Flash, Self-timer, Macro and ISO via the four axis of the directional-pad. In addition there’s also a dedicated button for accessing the main menu with, from where general settings can be altered through a combination of the D-Pad/scroll wheel and the Set button in the middle. Rounding things off are an EV compensation button, a Playback mode button, a Display button and a one-touch Movie Record button.

On the top of the camera you’ll find the main exposure mode dial that offers access to all of the camera’s various shooting modes. The shutter release button is located just in front of the main on/off button and is traditional, is surrounded by the zoom control rocker switch. Despite the cameras lack of size we actually found the various buttons to be well spaced, which in turn allows for easy handling of the camera. The in-camera menu follows the same layout as found in other Canon compacts, and even if you haven’t used a Canon in the past general navigation is pretty simple. 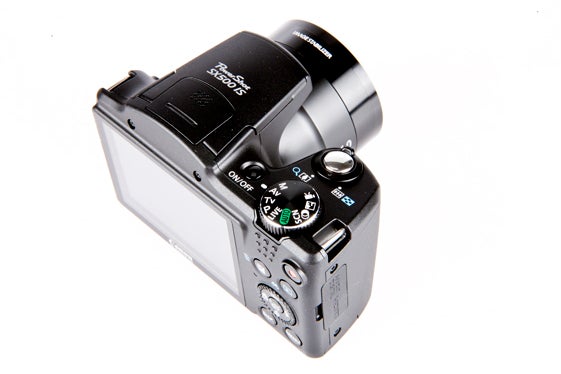 One further button of note is the ‘Zoom Framing Assist’ functionality that’s located on the left of the zoom barrel. This useful little feature is designed to help you keep track of subjects at long telephoto settings; pressing the button pulls the zoom right back to wideangle so that you can easily re-centre your subject. Take your finger off the button and the camera will zoom straight back in. While it’s undoubtedly a clever function, we can’t but help feel that either a simple zoom lever or a manually operated zoom barrel might work better.

While a few compromises might have been made in order to make the body of the SX500 IS as small as possible, the same cannot be said the about the camera’s general performance. The SX500 IS offers a range of autofocus settings, including Face detection and subject tracking AF. These generally perform quite well offering fast focus speeds and a pleasing level of accuracy – the Tracking AF system is particularly impressive. 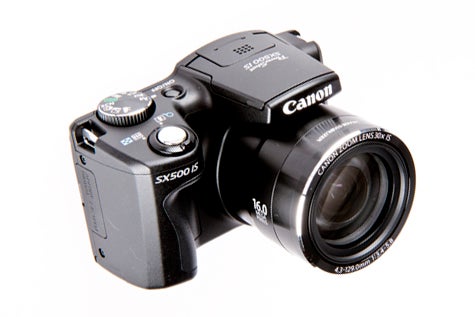 While it’s a shame that the SX500 doesn’t offer the ability to record 1080p Full HD video, the movie capture mode otherwise performs quite well. You can choose from a range of different capture modes, and it’s also possible to apply some of the digital effects filters that are offered in stills mode should you want to. Elsewhere, the SX500 generally feels quite responsive, with little in the way of shutter lag noticeable.

Canon has deservedly forged a good reputation for consistent image quality with its PowerShot range and the SX500 is no exception to this. Colours are generally quite vibrant and punchy, although not unrealistically so. Dynamic range is reasonable enough for a 1/2.3in sensor, although there is a tendency for the camera to slightly over-expose on occasion. So long as highlight detail hasn’t been completely blown out then it is possible to rectify this with a dab of EV compensation, or indeed a quick tweak in a digital darkroom. 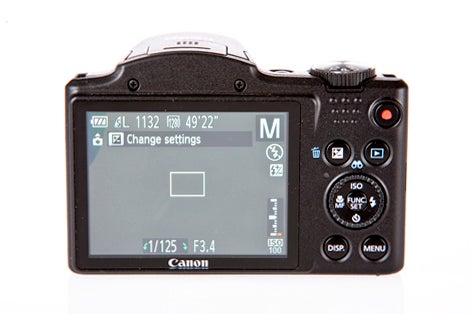 We mentioned at the beginning of this review how the SX500’s ISO range is limited to ISO 1600, which is at least a stop (or perhaps even two stops) below what we might have expected to see on a compact of this type and price. However, in testing we did find that the camera performs quite well –even at ISO 1600 images still remain useable for non-critical purposes, although there is a loss of fine detail thanks to the effects of the in-camera noise reduction. At ISO 800 and 1600 colour is also slightly muted, although not to the overall detriment of the image.

Verdict
The Canon PowerShot SX500 IS is undoubtedly an interesting proposition. Part superzoom and part ultracompact, Canon has managed to engineer a small camera that comes with a powerful 30x optical zoom on the front. Of course, in order to do this Canon has had to make a few compromises; there’s no viewfinder for starters, and physical controls have been scaled back to the bare minimum too. While we could just about live with these limitations, there are certain to be many superzoom enthusiasts who cannot. On top of this the decision not to offer 1080p Full HD movie capture is disappointing. Ultimately then, while the SX500 is an excellent camera on the whole it’s unlikely to be to everyone’s taste. 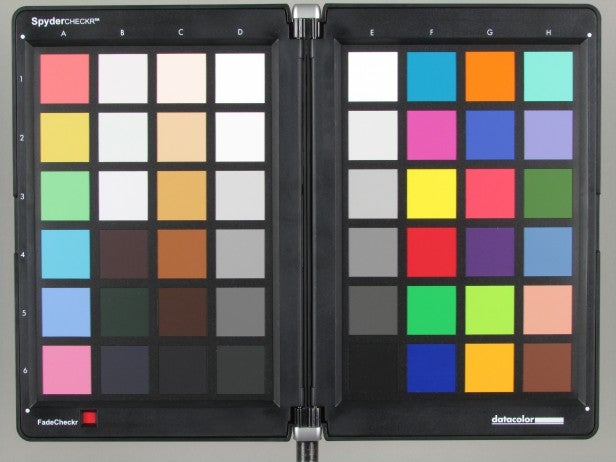 The image of our colour checker chart in full. The images below have been taken at rising ISO values from ISO 100 to ISO 1600 and then cropped at 100%. See the next page for some other real-life examples of images taken at the higher settings. 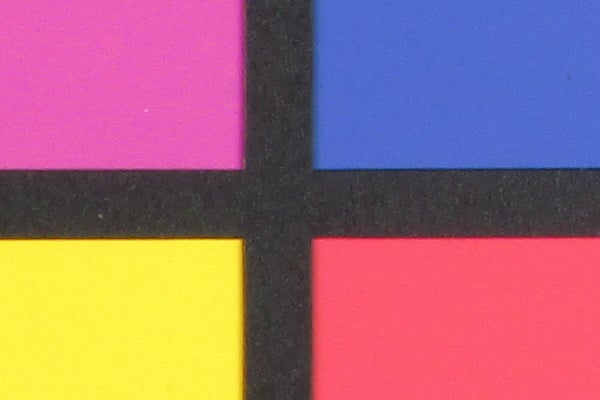 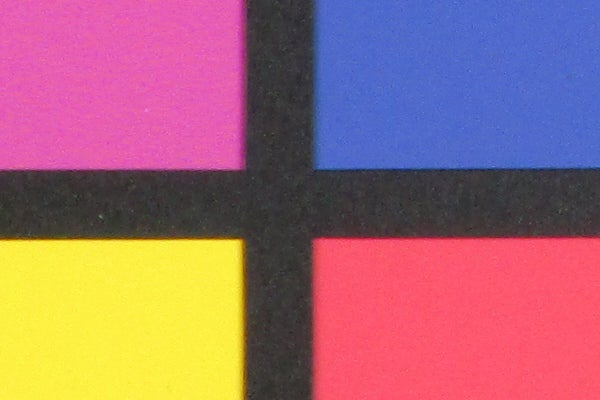 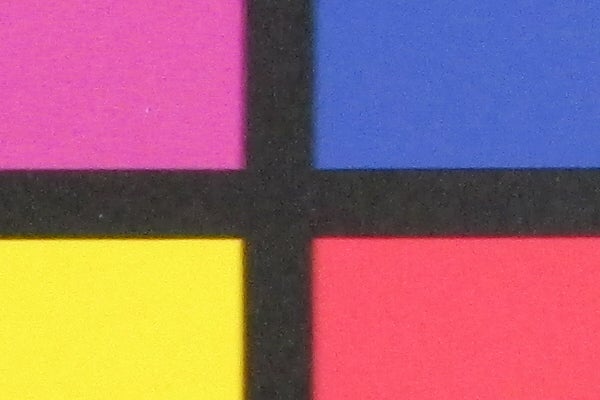 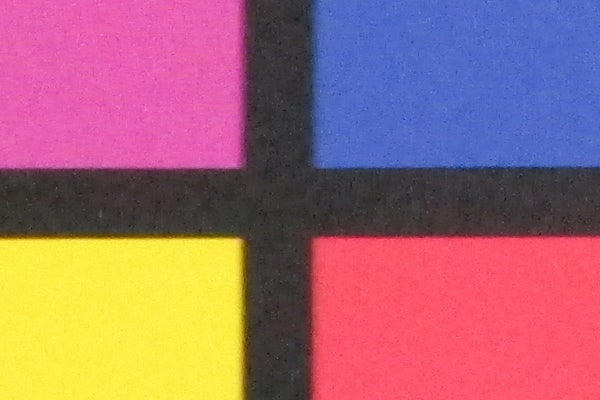 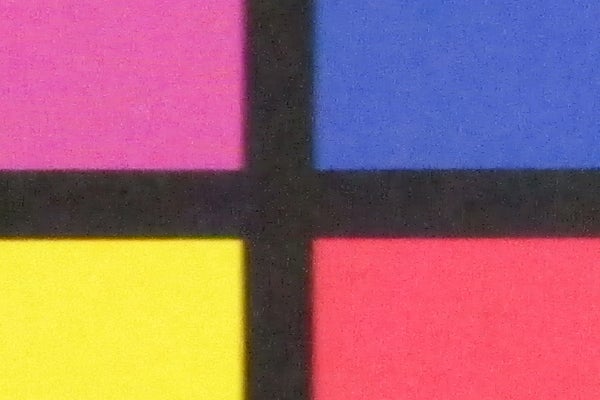 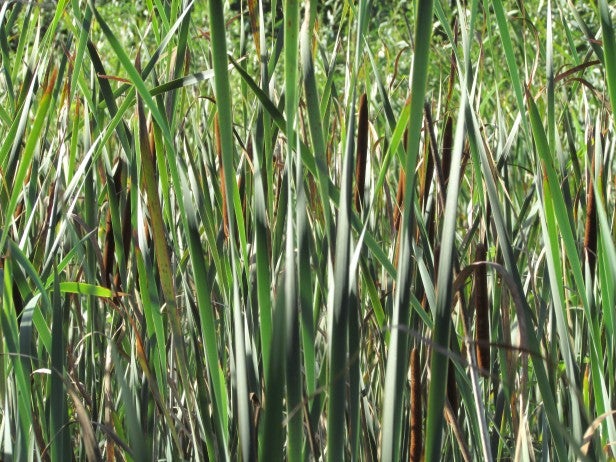 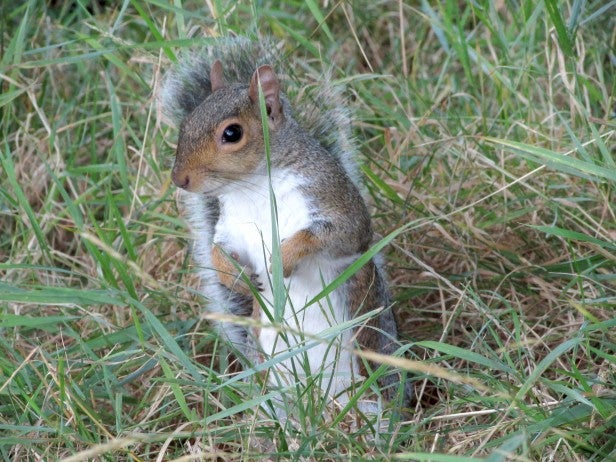 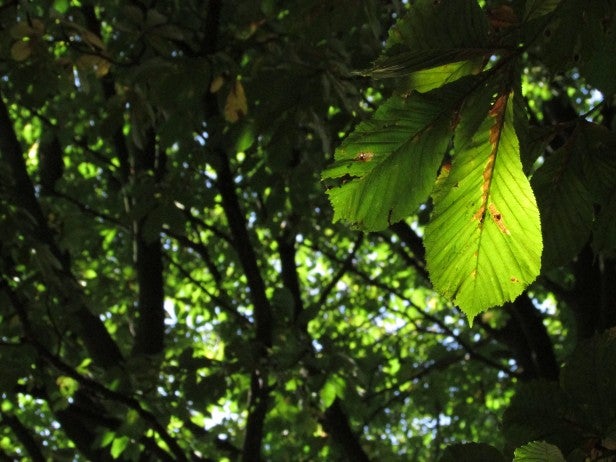 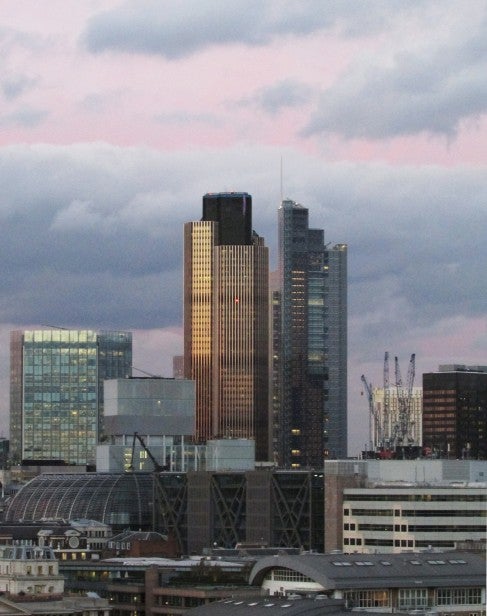 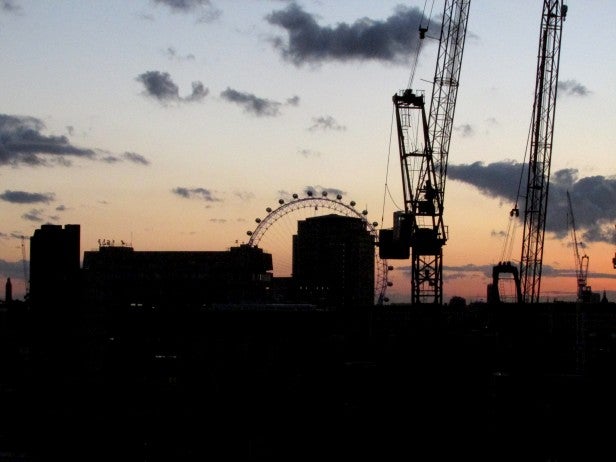