Canon’s inkjet all-in-ones are very much evolutionary products. Without any major technology changes, they continue to improve via subtle changes in their specifications. The base point on these machines is high, so any improvements are built on a solid platform.


The PIXMA MX870 is a replacement for the MX860, which was well received when it appeared a year ago. The ‘MX’ indicates it’s intended for a home office environment, rather than the photo enthusiast, who is serviced by the MP series. While it can still print photos from a variety of sources, this machine has a basic four-colour print process and forgoes CD and DVD print, in favour of full G3 fax functionality. 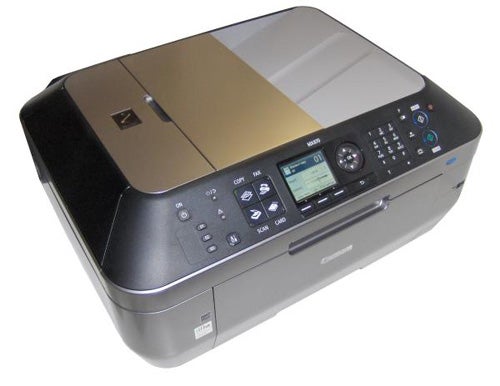 Over the years these large Canon all-in-ones have changed from their lacquer-box look to a big, black and silver techno-casket. More recently, the Automatic Document Feeders, with folding feed trays, have been incorporated within the sloped surround of the scanner’s top and the control panel of the PIXMA MX870 is set into this surround.


The controls still include Canon’s unique selection wheel, though this is now refined to the circular rim of a four-way, navigation button. The four mode buttons, for copy, scan, photo print and fax, are arranged in a square to the left of the 63mm full-colour LCD display and are echoed by a full numeric pad on the right.


At the extreme right end are buttons for black and colour copies and scans, and at the extreme left are three one-touch dial buttons for the fax. A further 100 quick-dials are available as two-digit number codes.


There are two paper sources: a rear tray with a pull-up paper support and a cartridge which slides in from the front. Both have capacities of 150-sheets and both can take plain paper. Canon recommends photo paper is reserved for the rear tray, though.

Behind a pull-down cover at front-right are card slots for CompactFlash, SD, MemoryStick and xD cards and there’s a PictBridge socket, too, which doubles up for USB drives. This socket has been positioned at an odd angle, which makes it awkward to fiddle plugs or drives into place.


There are sockets at the back for USB and Ethernet connection and for a fax line and optional handset. Wireless connection is pretty straightforward and supports several quick-connection standards, as well as normal passcode entry, via the numeric pad.


The five ink cartridges – there are pigmented and dye-based blacks – clip into the head carrier, once you’ve lifted the scanner section of the machine up onto its supporting stilt. Each cartridge has a corresponding red LED, to show it’s properly seated and indicate if it’s low on ink. Software installation is simple and includes Canon’s own scan and copy software.

Canon quotes ISO speeds of 9.4ppm for black print and 6.1ppm for colour. These are quite modest, compared with the opposition, who often spec their machines at well over 30ppm – ridiculous speeds for an inkjet. When we printed our 5-page text document, it took 52 seconds, which equates to a speed of 5.8ppm, and this increased to 7.14ppm for the 20-page – not far off the 9.4ppm claim.


A 5-page text and colour graphics test took 1.20, or 3.8ppm, which isn’t quite so impressive. These slower speeds are down to the long time the printer spends housekeeping before starting to print, sometime up to 25 seconds. 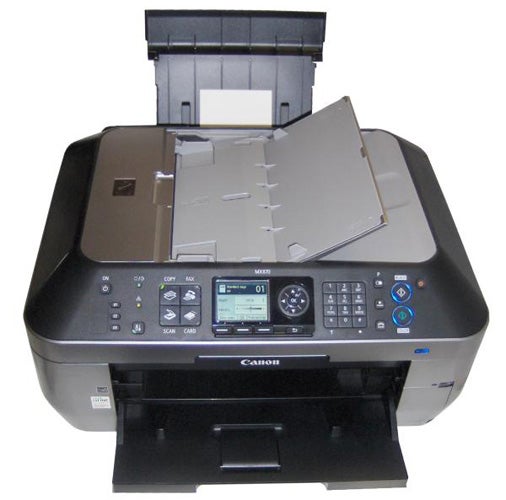 Duplex printing, which is standard on the PIXMA MX870 is something Canon hasn’t improved. Our 20-side, 10-page document took a mind-numbing 9:46, just one page per minute. This is mainly because of the pause needed for ink drying between sides, but other inkjet manufacturers manage duplex printing a lot more quickly.


Copy speeds are reasonable, with a single page taking 27s and a five-page document from the ADF completing in 1:16. Photos are also faster than many, with a 15 x10cm print taking 52s from SD card or Pictbridge.


The print quality is pretty good. Photo prints are bright and accurate, with smooth variations between colours in landscapes and plenty of detail in both light and dark areas. Colours on plain paper are also clear and definite, with little sign of dither patterns in solid fills. Black print isn’t quite as good as from previous Canon machines, with some feathering visible, giving a fuzziness to emboldened characters. 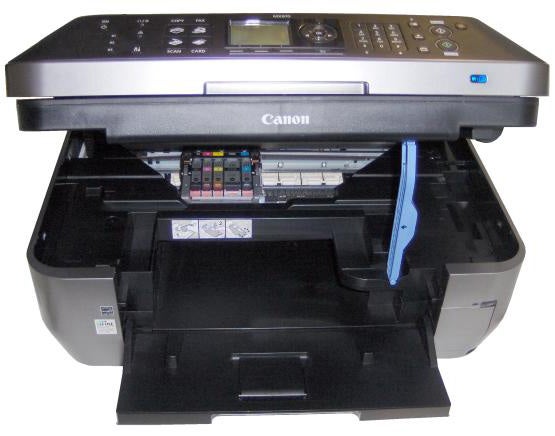 The increase in VAT has pushed the cost per page up, but outweighing this, the page yields Canon quotes are lower than from many previous machines. The costs come out at 3.4p for an ISO black page and 7.9p for colour. Both these are good in comparison with many of its inkjet and colour laser competitors.


Although the changes in the PIXMA MX870 are only small, they add up to an overall improvement is several areas, such as printing costs and ease of use. The main bugbear – the speed of duplex print – hasn’t been addressed, though, and is a lot slower than from equivalent HP or Lexmark machines.