Canon makes two parallel ranges of inkjet all-in-ones, intended for the photo enthusiast and SOHO business markets. The Canon PIXMA MX715 sits towards the top end of the second of these ranges, but has useful photo facilities, too.

The biggest new feature of the machine is its duplex scanner, which means it can scan and copy a page printed on both sides, in one operation. That’s not the same as one pass, as the paper is automatically fed through the scanner twice, in the same way the machine feeds paper when doing a duplex print. 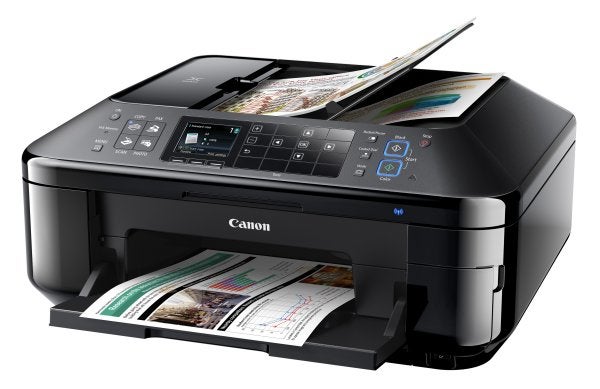 The machine takes on Canon’s customary jewellery box design, with the scanner set into a deeply bevelled surround, which also contains the control panel along its front face. The high-gloss black top flips over to become the feed tray for the Automatic Document Feeder (ADF), but leaves the machine looking neat when not in use.

The control panel uses Canon’s clever 16-key control pad, which doubles as both a fax number pad and a menu navigation set, depending on the mode selected from the four large keys to the left of its 62mm LCD display. Cleverly, the buttons illuminate with different legends depending on the current use. At the far right are Start and Stop buttons for scan and copy jobs. 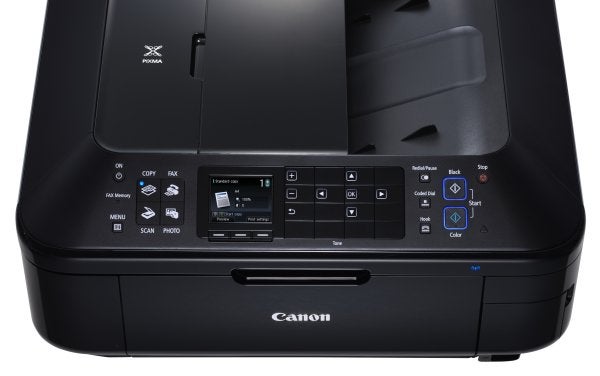 The front cover folds down to become the output tray and has a smaller size than most machines which use this technique, as the print heads – with their five coloured inks, including dye as well as pigmented black – are positioned further towards the back of the Canon PIXMA MX715.

Paper feeds either from a 150-sheet cassette which slides in from the front or from a pull-up 150-sheet feed tray at the back. You can load both plain and photo papers at the same time, though it’s sometimes difficult to force the machine to use a particular source for a particular job.

The five ink cartridges clip easily into the head carrier and the supplied software installs without difficulty. As well as USB and Ethernet sockets at the back, the machine supports wireless and includes WPS setup which connects to a wireless router with a couple of button pushes.

Canon rates the PIXMA MX715 at a healthy 12.5ppm for black print and 9.3ppm for colour. While we got somewhere close to this – 10.2ppm – when printing our longer, 20-page document, more normal five-page documents are likely to give between 8ppm and 9ppm. We measured little difference in speed between normal and speed priority print modes.

Printing our five-page black text and colour graphics test gave a speed much slower than the rated 9.3ppm, and we didn’t see more than 3.3ppm. Printing duplex also slowed the machine radically, so that our 20-side document took 5:46, a speed of just 3.5 sides per minute. 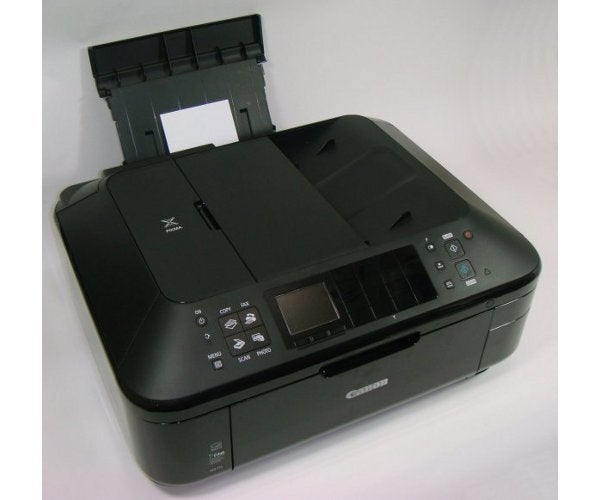 Copies weren’t particularly quick, either, with a single colour page from the flatbed taking 39s and a five-page black text copy from the ADF coming in at 1:02. Photo prints, however, were much faster. 15 x 10cm prints from a PC, an SD card or a PictBridge camera were all in the range of 32s to 35s while direct print from a Samsung Galaxy Mini Android smartphone took 40s.

Print quality of black text suffered from what appeared like a shadow to the characters, which meant they weren’t as sharp as we usually see from Canon printers. This happened on several different printouts and wasn’t always on the same side of the characters.

Colour graphics reproduced well, giving bright, eye-catching colours and the colour copy was close to indistinguishable from the plain paper original. Photos were as good as anything we’ve seen from a Canon, already pretty much the top of its class. 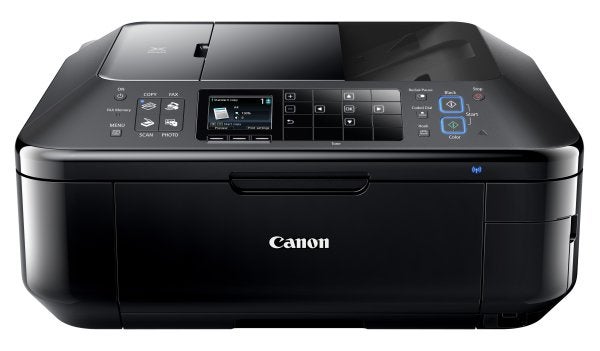 There’s only one capacity of cartridge available for this machine and buying them from the least expensive source we could find gives an ISO cost per black page of 3.5p, with 9.9p for ISO colour. We’ve seen other machines in this class better both these page costs, though they still beat most figures for budget colour lasers.

Verdict
The Canon PIXMA MX715 is a very good all-round all-in-one printer, which can turn its heads to both home office and photo prints. It’s reasonably quick, has the added advantage of a duplex scanner, and can handle mobile prints from a number of sources. Plain paper print quality isn’t quite as impressive as we’ve seen from other Canons, but this could have been a problem with our particular sample.