Canon’s MX range of PIXMA inkjet all-in-ones is aimed at the small and home office. The MX350, which sits roughly in the middle of the range, includes fax facilities and an Automatic Document Feeder (ADF) in its feature set and can upload and print photos, as well as plain paper documents.


Canon has a way of making its machines look solid and sturdy, while retaining a characteristic style. Unlike most inkjet machines with ADF’s, the 30-sheet feeder for the scanner is integrated into the top of the printer, with a sloped skirt around it, into which is set the machine’s control panel. When not in use, the ADF’s feed tray folds in half, to complete the smooth look of the printer’s top. 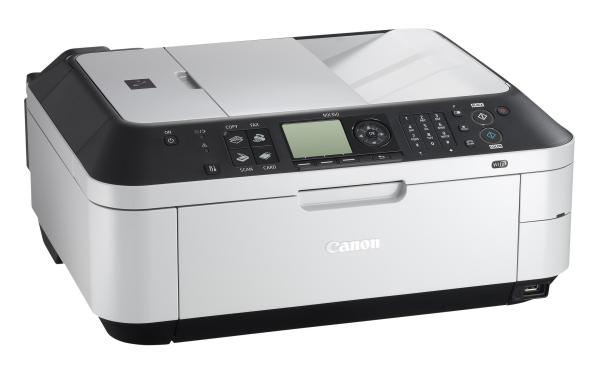 Perhaps the most unusual feature for this ostensibly business inkjet is the 62mm colour LCD display set into the middle of the control panel. This is ideal for showing copy parameters, menus and thumbnails of photos for selection. It works well alongside Canon’s trademark click-wheel, which you can run your finger around to flip through menu options, as well as pressing in four directions for selection.


There are four large function keys for copy, fax, scanning and photo upload, each of which has an indicator LED set into its rounded corner. A number pad is available for fax dialling and quick setup of secure wireless connections and there are two large illuminated buttons for black and colour print. 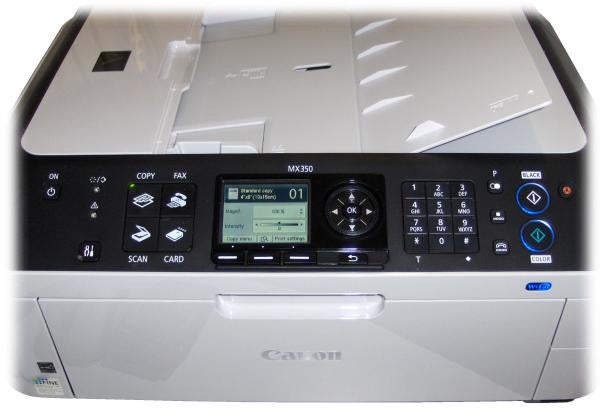 The only paper tray is a 100-sheet fold-up support at the rear and this leads to an output tray formed by folding down the front panel. It would be good to have the under-slung paper cassette incorporated into other PIXMA all-in-ones, but there has to be some trade-off against price.


Set into the curved right-hand edge of the machine is a hinged cover that hides three memory card slots. There’s a PictBridge socket below this, which doubles as a connection for USB drives. 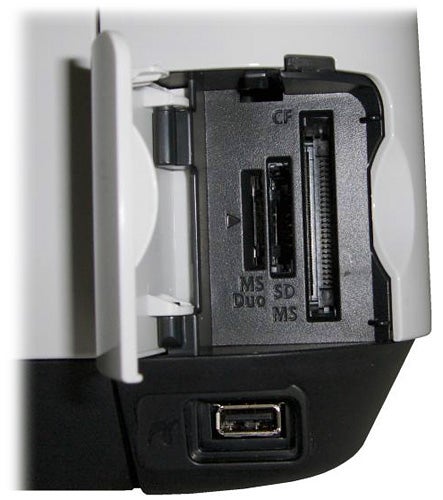 At the back are sockets for USB and Ethernet connections, but many people will use the built-in wireless setup wizard to connect directly to a Wi-Fi router. This is a simple process, even if you have to enter a passkey.


There are just two print cartridges – one back and the other tri-colour – that clip into the machines heads. Installation of the software, which is provided for Windows and OS X, is also pretty painless once you’ve run the setup utility from the CD. Canon’s useful suite of copy and scanning software is also provided.

The specification sheet claims speeds of 8.4ppm for black and 4.8ppm for colour print. Our five-page black text print took 55 seconds, including 14 seconds for preparation, which equates to a speed of 5.5ppm. The longer, 20-page print produced a speed of 6.9ppm, which is not a long way off the claimed speed. The five-page text and colour graphics document took 2mins 1sec, though, which is just 2.5ppm, only just over half of Canon’s quoted figure.


A single-page, colour copy from the flatbed scanner took 41 seconds, which is reasonable, though not breathtaking, and a five-page text copy from the ADF took 1min 9secs; much the same. Finally, photo prints in standard mode took just over 50 seconds, while in best mode the time rose to 1min 24secs. Good speeds, but beaten by some rivals.


The quality of the printed output is good for an inkjet. Black text is clear and well formed, with little sign of feathering or other plain-paper artefacts. Colour graphics are also well reproduced, with good solid colours and again, few signs of black ink run into colour. 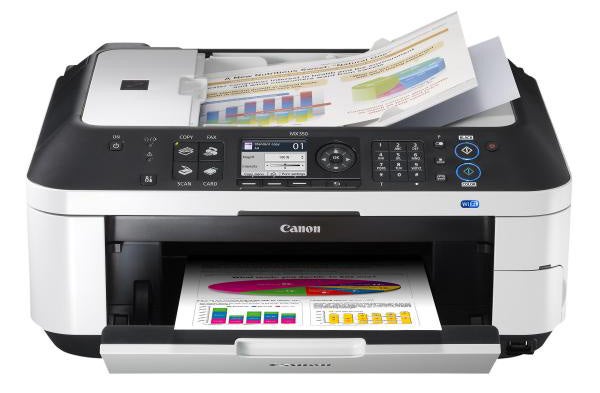 Photo prints, as we’ve come to expect from Canon, are very good, with smoothly gradated fills, such as in areas of sky, and plenty of detail in intricate sections of an image. They only fall down is in dark, shadowed areas, where some detail is lost. Not at all bad for a four-colour print, though.


The two print cartridges are each available in standard and high-yield versions and, as usual, we use the high-yield consumables to calculate running costs, since these give the best economy. At the cheapest Internet prices we could find, we calculate a black page cost of 4p and a colour cost of 8.6p.


Both these costs are quite high, when measured against other Canon all-in-ones, such as the £171 Canon PIXMA MX870. That machine came out over 0.5p per page cheaper, though printers from other suppliers at a similar price are not significantly cheaper to run.


Canon’s PIXMA MX350, which will be exclusively available from Argos from July 2010 onwards, is a capable small and home office printer. It has an intelligent combination of features – it’s good to see photo upload as well as fax and ADF, for example – and they’re well implemented.


The main snag we can see is the asking price of £150. Compare this with the Canon PIXMA MX340, which lacks the photo card slots and replaces the colour LCD with a two-line mono one. In other respects, it’s pretty much the same machine, but costs under £80. The PIXMA MX350 looks pricey.