Back in October 2007, we reviewed Canon’s PIXMA MP610 all-in-one and the PIXMA MP970, reviewed here, has many of the same features. The main difference is the price, with the MP610 costing around £115 and this top-of-the-range model coming in at just under £200. So what does the MP970 have that makes it worth the extra £85?


It could be the amount of plastic, as the case of this machine is massive and much taller than its cheaper siblings, though the reason isn’t clear. The machine’s layout is conventional for Canon, with a 150-sheet paper tray at the rear and a paper cassette, with the same capacity, slotting in from the front. Either source can be used for paper or photo blanks. 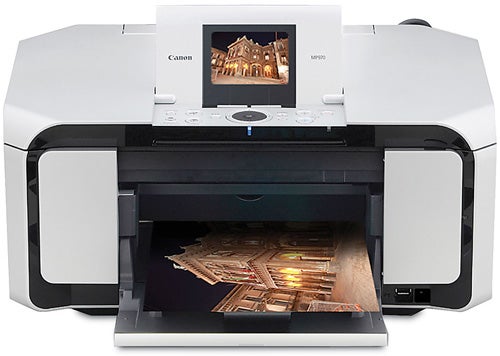 At first glance the MP970 appears to have no control panel, but it’s actually set into the lid of the scanner. A panel flips up to reveal an 88mm LCD display, 20mm bigger across the diagonal than the MP610’s. We’re not convinced about the positioning of the controls, because if you lift the scanner lid with the control panel open it can be cumbersome.


The lid of the scanner has a removable underside, which reveals an illuminated strip for scanning transparencies. There’s a transparency and film holder in there, too, which you can lay on the flatbed to help with these high resolution scans. This is something the MP610 doesn’t have, though the maximum scan resolution is the same on both machines.


Main controls make use of Canon’s innovative Easy-Scroll wheel and a similar, elliptical display of icons appears on the LCD. The silver-coloured, right-hand panel on the front of the printer hinges open to reveal twin memory card slots, for all the common types, though the PictBridge socket is below the door and you don’t need to open the panel to use it. 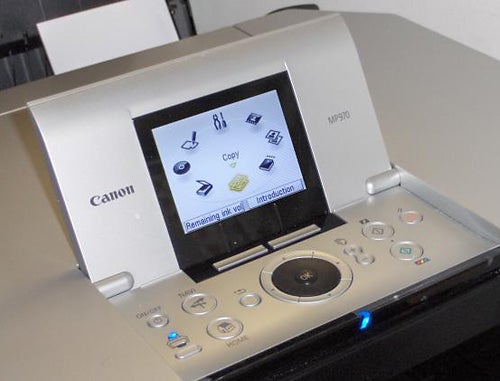 The front output tray is neat, as sheets feeding from the printer don’t protrude much from the front. However, it also means 15 x 10cm photos are slightly more awkward to retrieve and sit awkwardly on one of the raised runners designed to keep A4 sheets in order. Also awkward is the slot to take the CD and DVD carrier for direct disc printing. This is so deep inside the all-black interior of the printer, making it hard to locate the carrier in its guide slots.


Joining the USB socket at the back is an Ethernet port, included as standard, which partly explains the higher pricing. Software provided with the PIXMA MP970 includes OmniPage SE and Presto! PageManager, as well as a suite of Canon’s own applications including a useful CD/DVD print utility for direct and network printing.


There are seven inks in this all-in-one, two more than in the MP610, with both dye and pigment-based blacks, and photo cyan and photo magenta to supplement the standard CMY set. All the cartridges clip easily into Canon’s permanent print heads and useful red LED indicators on the cartridge carrier show any inks that need replacing.

Canon is honest enough to quote print speeds for normal print as well as draft mode. Even though its figures of 15ppm for black print and 9.9ppm for colour are still optimistic, they’re not as outlandish as some of its competitors’, as we managed to print our five-page text document in 33 seconds and the colour text and graphics in 1 minute 19 seconds. These times give real-world speeds of 9.1ppm and 3.4ppm, respectively.


There’s a duplexer built into this machine and like the one in its cheaper sibling, it’s incredibly slow. Our 20-side text document took 9 minutes 57 seconds to complete and it would be much quicker to print the first 10 sides, turn the pages over by hand and then print the second ones. The main delay is an eight second wait between completing the first side and starting the second.


The print mechanism in the PIXMA MP970 can produce a one picolitre ink drop, the smallest size of any consumer printer. This should enable a high level of detail in photographic prints and on examining our samples we saw very smooth gradations of colour and a high level of detail, both in lit and shadowed areas of shots. Print on glossy paper gave a uniformly lustrous finish, too, unlike some ink-jet output, where a lot of reliance is placed on the white of the paper and can give a matte finish to very light shades. 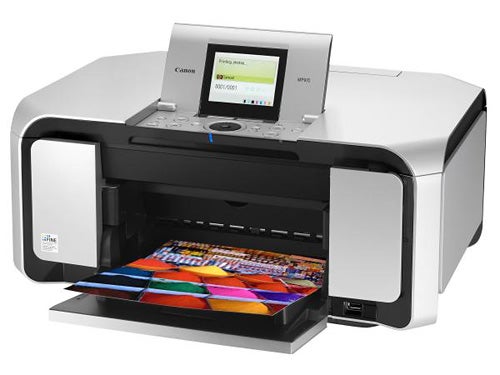 Text print is clean and dense and even small characters are well formed. Business graphics are fair, though areas of solid colour fill are not as smooth as we expected. A colour photocopy showed some lightening of tints, though in general reproduction was well above average.


As usual, the cost of running a device like this depends very much on the price you can find for its ink cartridges. We found some good deals in our price scans, which produced an ISO black page cost of 1.88p and a colour cost of 3.88p. Both these figures use Canon’s page yield figures, which we found conservative in comparison with our own yield test results. The costs are good for an inkjet printer, with the colour cost being half that of some rivals.


So, the extra £85 you pay for the PIXMA MP970 over the PIXMA MP610 brings you a finer minimum drop size, a built-in transparency scanner, a bigger LCD screen, six-colour print and network connectivity. The machine is at the top of Canon’s range and has the best spec and the best print quality of just about any all-in-one printer on the market. If you ignore its hopeless duplex print speed, it’s an excellent piece of printing, scanning and copying technology.