The PIXMA MP610 carries on the silver and black lines of its predecessor, but the new machine is a bit deeper and more rounded. It’s almost octagonal, but with longer sides front and back. A paper feed tray flips up from the back of the top panel and a telescopic support pulls up to hold the paper. 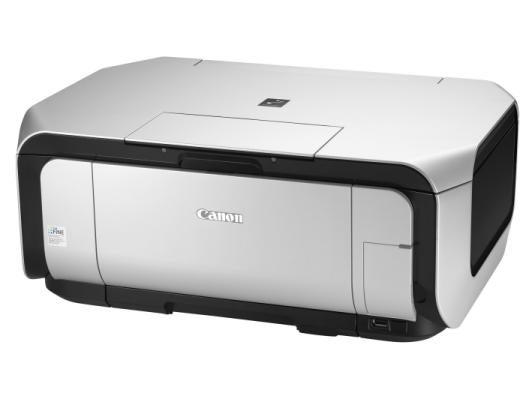 At the front of the machine’s lid, a fold-up panel holds a 62mm LCD display and the machine’s logically designed controls are set into the scanner lid itself. Here there are two context-sensitive function keys, several buttons for navigation and the same finger dial and four-way button pad that the PIXMA MP600 used to select menu options.


The front panel folds down as a paper exit tray and below this is paper cassette. Both cassette and tray can take 150 sheets of plain paper each, or you can use either of them to take photo blanks, arranging the two feed mechanisms in whichever way is best for you.


A small flip-open cover to the right of the output tray takes CompactFlash, SD, MultiMedia card and MemoryStick, but not xD cards. This seems an odd omission, since this card format has superseded SmartMedia and has a reasonable following with camera makers – Fujifilm and Olympus spring to mind. At the back of the machine are mains and USB 2.0 sockets – there’s no network or wireless support on this machine. 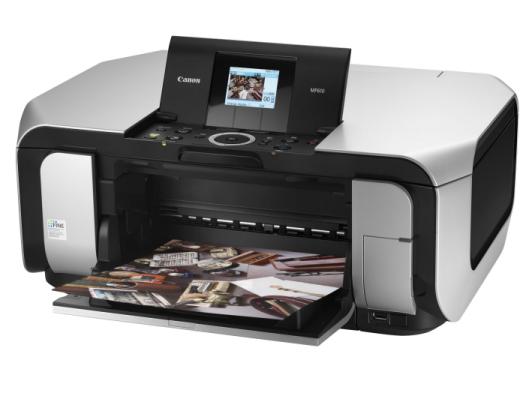 The All-in-One takes five cartridges, with both dye and pigment-based black inks, and these all clip into the head carrier and are, helpfully, illuminated with red leds when properly clipped into place.


Canon provides a copy of Nuance OmniPage SE and Presto! PageManager for OCR and document handling, as well as a range of Canon’s own applets for photo and label printing. Label printing for CDs and DVDs is standard with the PIXMA MP610 and a separate disc tray is supplied. As before, this slots in from the front of the machine, once you’ve pulled down an awkward internal flap.


One of the other new features of the PIXMA MP610 is its inbuilt, automatic photo correction, which analyses an image from a memory card or PictBridge camera and makes automatic adjustments to brightness, contrast and saturation. This is claimed to be particularly good for bringing out shadow detail and worked well for us.

The PIXMA MP610 was quick through most of our tests. It raced through the five-page text print in 35 seconds and completed the text and graphics test in 74 seconds. A single-page copy took under 30 seconds and a 15 x 10cm print completed in 50 seconds. Prints from SD card and a PictBridge camera were even quicker with the PictBridge connection producing a print in just 39 seconds.


The one thing you wouldn’t want to do regularly on the MP610 is print double-sided pages. Duplexing takes the same excruciatingly long time it did before – 8:42 for a 20-side document. The printing itself isn’t that slow, it’s the 10 second wait between finishing the first side of each page and starting the second that gives the poor result.


Print quality from the PIXMA MP610 is very good, with black print coming through clear and strong and with very little feathering. Graphics print is also well reproduced, with even black print over coloured backgrounds looking clean and well registered. Our photo test prints showed smooth colour gradations in the sky and fine detail in the foreground of the image. There was plenty of detail in darker, shadowed areas, too. 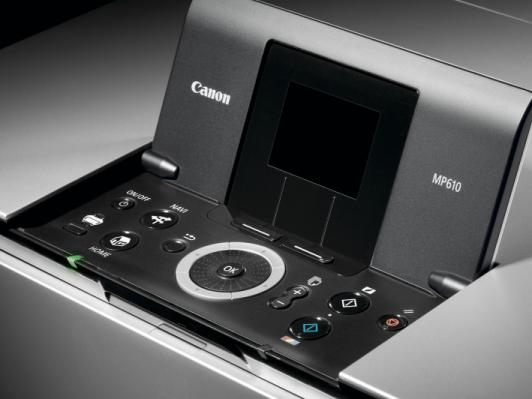 Copying one of our test pages using the machine’s flatbed scanner gave results that were closer to the original than from many All-in-Ones at similar price points – better than the Kodak EasyShare 5300, for example. Canon uses a dual-rendering scheme to produce its scans and claims to have improved blue and yellow accuracy with the MP610.


The cost of running this device depends more than usual on whether you’re printing black or colour. It uses different black inks, reserving the pigmented black in the PGI-5BK cartridge for black pages.


In our tests, ink usage was close to Canon’s published figures, so we’re happy to go with the company’s results. The cheapest price we could find for the cartridges offers the pigmented black cartridge at £8.51 and each of the colour cartridges at £7.35. Including 0.7p for paper, this gives print costs of 2.51p for black print and 5.66p for colour. The black print figure is a little on the high side, but this is compensated for by a very good colour cost.


There are useful improvements in the design and function of the PIXMA MP610, over its predecessor. Given that the price hasn’t increased significantly, this remains an excellent choice for a general-purpose, personal All-in-One machine. Just don’t expect it to complete a duplex job in a hurry.