Although the trend is definitely from ink-jet printers to all-in-one machines, there are still advantages to the single-function machine, which is smaller and slightly cheaper for the same specification level. Canon’s new PIXMA iP4500 includes duplex printing, a PictBridge camera socket, dual paper trays and CD/DVD print facilities in a machine costing under £70.


Just about all Canon’s printers and all-in-ones have the same silver and gloss-black livery, which is smart without being showy, and the iP4500 is a simple machine to set up and run. You fold up the rear section of the top cover for a 150-sheet paper feed tray, or slide out the 150-sheet cassette from under the front of the machine as a secondary paper source, and fold down the front cover to produce a very serviceable output tray. 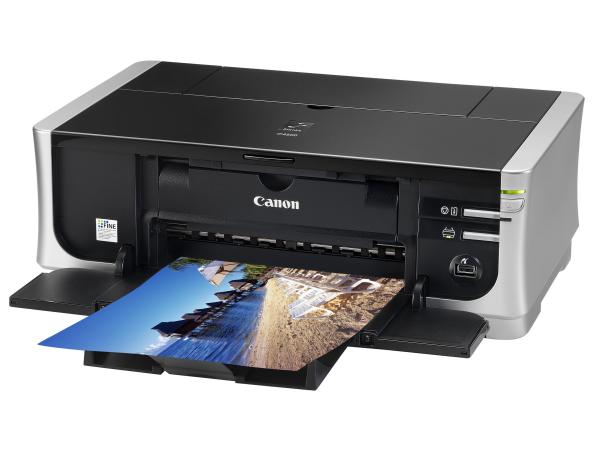 There are just three buttons on the printer, for power, paper feed and paper source selection. A PictBridge socket below them at the front enables you to print from a camera. Flipping down an inner panel provides access to the CD/DVD slot, for which a disc carrier is provided with the printer. At the back are sockets for mains and USB 2.


There are five ink tanks, which need to be plugged into the head carrier and each of these is indicated with a red LED, which also flashes when ink is getting low. The software installation is painless and includes Easy PhotoPrint EX and a label printing applet, as well as the driver. This supports some interesting extras as well as duplexing and booklet printing.


You can print in sepia, which is not particularly surprising, but can specify a colour for monochrome printing too and simulate an illustration from a photo or apply the image optimiser, which aims to improve photos’ contrast and brightness.


While the print speeds of this machine are not up to Canon’s claims – and the company is fair enough to quote normal as well as draft print speeds – it produces black text pages reasonably quickly. It took 32 seconds to complete our five-page text print, equivalent to 9.4ppm, against a claim of just under 15ppm.

The five-page colour text and graphics document took 1 minute 10 seconds, or 4.29ppm, against Canon’s figure of 12ppm, which isn’t quite as good as the straight text print. Worse, though, is the result of printing a 20-side duplex document. The iP4500, like its stable-mate, the PIXMA MP610, took over eight minutes. When it’s printing, the speed is much the same as for single-sided print, but the printer waits, presumably for the first side to dry, before printing the second side of each sheet. The slow print speed takes away some of the paper-saving attraction of printing duplex.


A high-quality photo print took 49 seconds, which is a good time, though still over twice what Canon quotes for a 15 x 10cm borderless print. 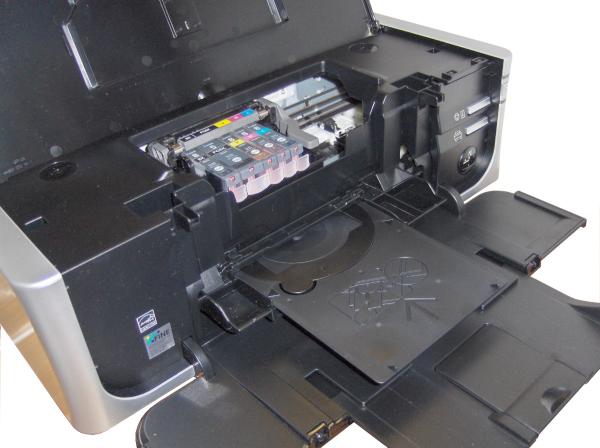 The minimum drop size on the PIXMA iP4500 is an industry-leading 1pl, which theoretically should give a very high level of detail, particularly in photos. In practice, photo prints are well detailed, with sharp, bright images showing intricacies in bright light and areas of shadow. Smoothly changing skies are well reproduced, with much less dithering than from some of the machine’s main rivals.


Graphics print is also high-quality, though text printed over colour on plain paper runs noticeably. This isn’t true of the pigmented black ink used for straight black text, which is clean and clear at all normal font sizes. 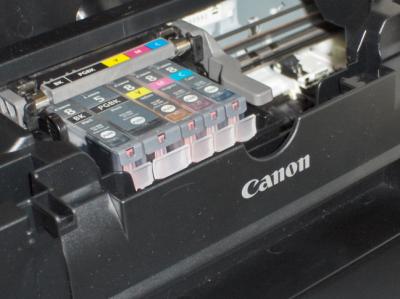 Canon quotes ISO page yield figures and from our tests, its figures are conservative, so we’re happy to use Canon’s numbers in calculating running costs. We also found original Canon cartridges at well below normal prices on Amazon. There’s no indication that this is a limited time offer, so we’ve used them to produce figures of 1.84p for black pages and 3.87p for colour ones. These are very low for an inkjet printer, but would also reduce the running costs of any other Canon machine using the same ink cartridge set.


Anybody considering this single function printer would need to compare it with machines such as Epson’s Stylus Photo R360, which comes in at the same price. The iP4500 is faster, more versatile and produces cleaner text, and photos which are just as good as the Epson’s.


The Canon may duplex print as fast as a snail pulling a hearse, but it least it can duplex, a rare commodity in a sub-£100 printer. Its dual paper trays mean you can keep the printer closed and still print from the cassette, flipping the top up only when you need to print photos. This is neat and reduces dust getting into the mechanism.


Overall, the iP4500 is an excellent printer for the money and should be well up your shortlist of budget ink-jets.