In 2008, Canon raised the bar on AVCHD camcorders with its HF10 and HF100. But its 2009 models, whilst remaining excellent, haven’t been able to maintain the same kind of lead. Where the HF10, HF11 and HF100 provided premium quality at a relatively reasonable price, the new models have tended to either provide ultimate quality with no expense spared, such as the Legria HF S10, or to reduce features for greater affordability, such as the Legria HF20. The Legria HF21 is heir to the latter.


In keeping with Canon’s numbering strategy, the HF21 is essentially an improvement on its predecessor. It’s still based on the same 1/4in CMOS sensor as the HF20, which boasts a gross 3.89-megapixels. Thanks to the smaller sensor size compared to the 2008 models, a 15x optical zoom is available. The autofocus system combines both regular through-the-lens (TTL) techniques and Canon’s Instant AF, which uses an external active sensor. This means the HF21 can focus even in bright or dark conditions, unlike camcorders that rely entirely on TTL.


The biggest difference compared to the earlier model is the amount of onboard storage. Instead of 32GB, you get 64GB of flash memory. Even at the top quality mode, which records at 24Mbits/sec, this is enough for six hours of footage, which will be more than sufficient for most holidays. There are four other quality modes, too. At the lowest setting, which operates at 5Mbits/sec, you can fit a whopping 24 hours of video onto the onboard memory, and there’s an SDHC slot available should you need more. The top two quality modes use Full HD resolution, but the bottom three drop down to 1,440 x 1,080, like HDV. Thanks to the use of flash memory, the HF21 is surprisingly compact, too, weighing just 340g. 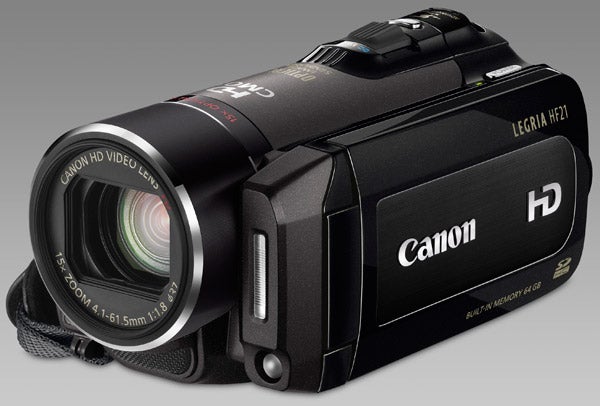 The HF21 offers a reasonably healthy level of features. There are mini-jacks for microphone and headphones, the latter doubling as the AV output. Manual level control is available for microphones, too. There’s even an accessory shoe, protected by a plastic flap. But this is Canon’s “S” Mini Advanced Shoe rather than a standard-sized one, so you will be limited to proprietary peripherals.


The icing on the cake is missing, however, as there’s no lens ring available. Instead, all manual settings are configured using the controls around the LCD. On its own, the joystick accesses the quick menu system, a relatively recent addition to the interface of Canon camcorders. This provides rapid access to the most frequently-used settings such as turning on the video light and the Pre-REC function. The latter constantly spools video, which is tagged onto the beginning of the file when you hit record, so if you’re slow to react you won’t necessarily miss a shot.

Further functions on the quick menu include backlight compensation, the basic exposure control, and manual focusing. This calls on the joystick, which is a slightly fiddly process. But at least there’s a focus assist capability to hand, which temporarily magnifies the frame for a closer look as you adjust. This is also where you gain access to the aforementioned manual audio level control, as well as the face detection system. The latter works fairly well when the faces in question are sufficiently illuminated. However, faces in deep shadow aren’t easily detected, which means the system doesn’t help when shooting people against a bright background.

Further manual options can be found via the usual Function menu. There are shutter and aperture priority modes, which allow you to vary the shutter speed from 1/6th to 1/2000th of a second and iris from F1.8 to F8 respectively. The two can’t be set independently, but the basic exposure control is still available, so this can be used to provide a similar level of flexibility. There is also a Cine mode, which alters the colour gamut for a more film-like look, and an array of 11 scene modes, including Underwater and Surface options as well as the usual Sports, Portrait et cetera. 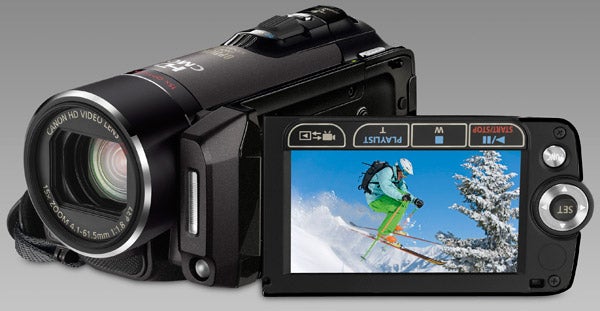 The HF21 also incorporates Canon’s Image Effects, which provide presets for altering colour saturation and sharpening. There’s also a Soft Skin option that reduces sharpening purely in areas of flesh tones. The Image Effects even include a customisable option, with user-configurable sliders for Colour Depth, Sharpness, Contrast and Brightness, although each one only has a single position up or down. There are a few more goodies available within the full menu. Here, you can select PF25 shooting, which records progressive frames but still stores them within an interlaced 1080i video signal. There is also an x.v.Color mode available. 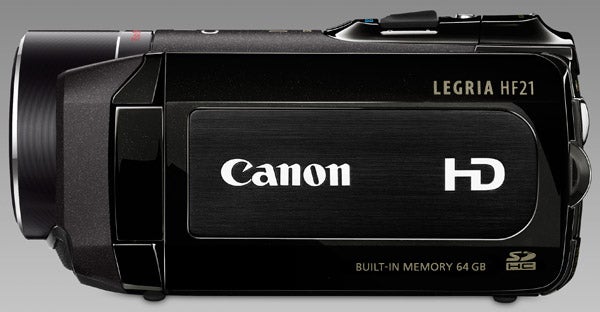 The LEGRIA HF21 is quite a comfortable camcorder to use, thanks to the arrangement of controls on the LCD. Aside from the traditional single-handed posture, with the thumb toggling record, there is also a start/stop button on the LCD’s edge, so you can operate the camcorder at waist height with two hands – a very comfortable posture where you can keep things steady quite easily. 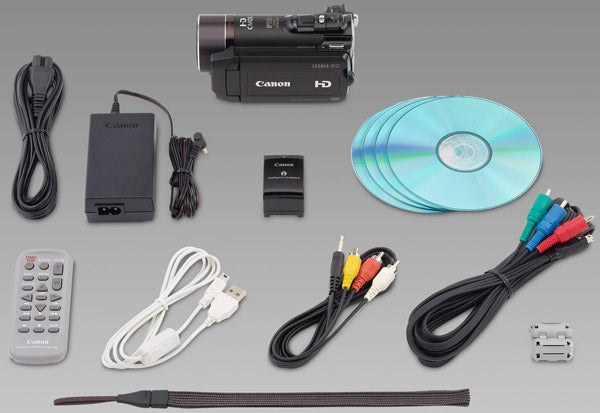 Unfortunately, what let the HF20 down most of all remains in the HF21. The smaller CMOS doesn’t particularly affect performance in good lighting. In bright sunlight or even cloudy conditions, colours are vibrant and faithful with plenty of fine detail. However, low-light capabilities are behind 2008 models such as the HF11. The image remains bright down to relatively low illumination, but there’s a fair amount of grain visible. Performance isn’t bad at all, and much better than most camcorders in this class. However, Canon’s own Legria HF S10, Panasonic’s current top-of-the-range models, and Sony’s premium models such as the HDR-X520 all surpass it in low light.


So it is the overall video performance which lets the HF21 down, particularly when you take into account current pricing. At over £800, this camcorder is up against the aforementioned top-of-the-range models from other manufacturers, and is very much in the realm of camcorders aimed at serious, enthusiast videomakers. In particular, Panasonic’s HDC-TM300 offers slightly superior low-light abilities and more features including a lens ring and standard-sized accessory shoe. It has half the memory, but is also cheaper. So whilst the Canon Legria HF21 is a very good camcorder, at its current price we’d opt for the Panasonic HDC-TM300 instead.