Canon has changed its HD camcorder strategy in 2009. Where the 2008 models were all essentially variations on a theme, the new Legria range has split in two. One half is even higher end, represented by the HF S10, while the other half is intended to be more mainstream and affordable. Our first taste of this more modest division is the HF20.


Where the HF S10 is bigger and more packed with features than any of Canon’s previous Flash memory-based offerings, the HF20 is slightly smaller. It is 40g lighter and a few millimetres shorter in each dimension, but this reduction in size has come at the expense of an important internal specification – the sensor. The HF20’s 1/4in CMOS is considerably smaller than any Canon HD camcorder produced until now, but it’s relatively high resolution, with 3.89Mpixels, although only 2.99Mpixels are used when recording video.


Unlike the HF S10, the extra sensor pixels aren’t harnessed for a digital telephoto, but the optical zoom is already a healthy 15x, thanks to the smaller sensor. Image stabilisation uses an optical system, too, which is more effective than digital methods. 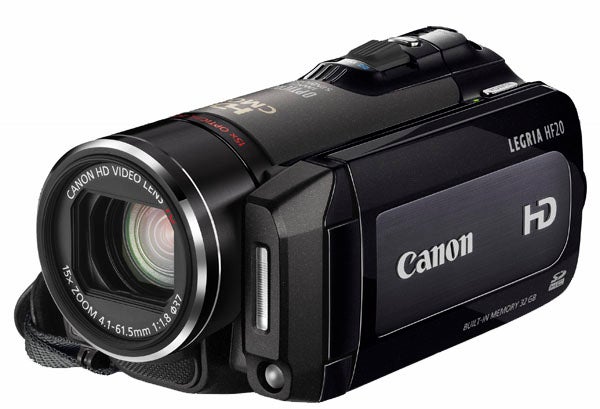 So the HF20 is not the leap forward in specification of the HF S10. It lacks the manual control wheel on the lens, too, but it does have some features in common with its premium cousin. For a start, there’s the same quick access to a selection of frequently used settings. Simply push the joystick up to scroll through the options, which range from toggling the built-in LED video light and backlight compensation to controlling mic levels.


You can also turn on or off the face detection system. Without the HF S10’s control wheel, the joystick is used for manual focusing, too. The HF20 does still include a focus assist system, which zooms the LCD as you adjust so you can get a closer look. However, there are no peaking or alternative methods to further aid focusing. Fortunately, Canon’s Instant AF is one of the quickest autofocus systems in the business.

Canon’s now-familiar ‘Function’ button puts the HF20’s various modes just a few finger presses away. In addition to the standard ‘Program’ mode, there are aperture and shutter priority options, plus ‘Cine’, which alters the gamut for more film-like colour. Finally, there is the usual array of scene presets. Priority modes can be used in tandem with the exposure setting to provide quasi-independent control over both shutter and aperture.

Canon’s Image Effects provide even more detailed manipulation of how the camcorder records its video – much more than any other manufacturer. There are presets for boosting or reducing saturation and sharpening, a soft skin mode, plus a custom option with independent settings for brightness, contrast, colour saturation and sharpness. Further sweetening the deal, progressive scanning is available via 25pf mode, which encodes full frames into a 50i signal for the widest format compatibility. You can also shoot in x.v.Color, which widens the range of each 8-bit colour channel to its full extent, for deeper hues. 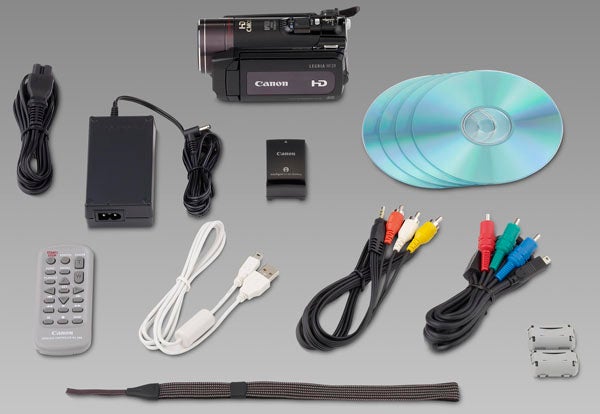 You also get the same amount of on-board Flash memory. The 32GB integrated will be enough for two and a half hours of footage at the top data rate. This records Full HD AVCHD with a 1,920 x 1,080 resolution at 24Mbits/sec, the most currently available from this format, although there are alternatives ranging down to 5Mbits/sec, allowing 12 hours of footage. If this isn’t enough, an SDHC slot is also provided for further expansion. 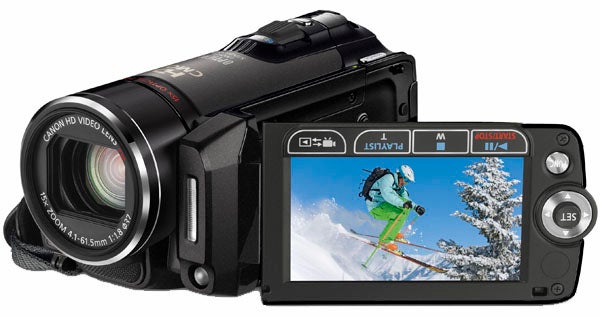 Despite its more budget orientation, the HF20 still also provides mini-jacks for attaching headphones and an external microphone. However, Canon is sticking with its proprietary ‘S’ Advanced Shoe rather than the standard formats, so only Canon peripherals will be compatible. The tripod mount has at last been moved from the unbalanced location of 2008 models near the front, to a more sensible place in the middle, although it is still on one edge of the body.

The quarter-inch CMOS implies worse low-light performance compared to previous Canon HD models, as sensitivity is directly related to the area collecting light from the lens. Although image processing can compensate for this, with the JVC Everio GZ-HD300 punching above its weight for this reason, in the HF20’s case the compromise is clear.


As illumination drops, much more grain becomes visible than with Canon camcorders sporting larger sensors. This noise is also more multicoloured, increasing its intrusiveness. With most other Canon HD camcorders, switching to progressively scanned 25pf mode helps this a little, as it enables a 1/25th shutter speed. With the HF20, however, there is little discernible difference between the two. 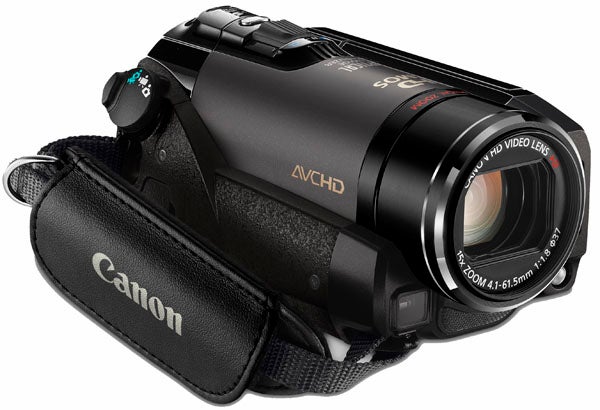 Fortunately, the HF20 saves itself in better lighting. Here, performance is every bit as good as previous models. Colours are rich and vibrant – and if you prefer a less saturated look you can always dial this back with the Image Effects. Fine details are clearly visible, and scenes of high contrast are resolved without blowing out bright areas or losing gradation in shadows. So the HF20 will provide pleasing results in many situations – just not when the lights dim too much.


When it comes to editing, there will be few problems, as the AVCHD format is now supported by all mainstream PC editing apps, as well the most recent versions of Apple’s iMovie. If you merely want to watch your footage straight on your HDTV, the HF20 offers mini-HDMI, although as usual without an adapter supplied for use with the full-sized HDMI on TVs. The HDMI output complies with version 1.3, so transfers x.v.Color if supported by your TV. Alternatively, there’s a proprietary connection for analogue component output at 576i or 1080i, and the headphone jack can be switched to output composite video. 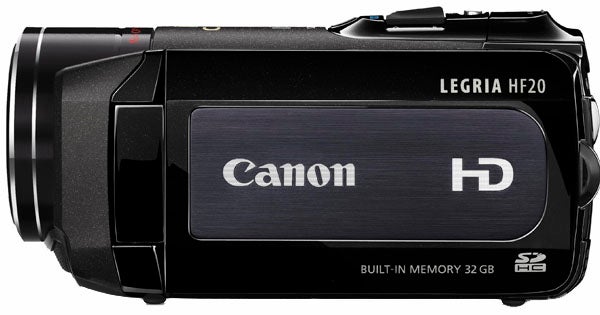 
So the Canon Legria HF20 doesn’t top the quality charts like previous Canons, although it is still very good. This would be fine if it was a lot cheaper in compensation. Canon’s 2008 models didn’t translate their technical excellence into total sales dominance, thanks to cheaper models from competitors, in particular Panasonic’s HDC-SD9. Unfortunately, the weakness of the pound has foiled Canon’s plans. The Legria HF20 is no cheaper than the HF11 was at launch, and the latter will shoot better video in low light. For this reason, if you can find the HF11 for less than the HF20, or the HF100 for considerably less, both would be better value.