Colour laser printers are falling in price, almost as quickly as they’re improving in quality. This new Canon, the Laser Shot LBP5200, costs just over £200 including VAT, which ought to get a few wallets readied. Pleasingly it provides very good colour prints, even of photographic subjects. At only twice the price of a competent colour inkjet, you get improved running costs and print speed. If you’re not fussed about glossy photo prints, it could be a very practical purchase.


This is quite a compact machine, considering it produces full-colour output. It’s about the size of a microwave oven, only deeper, and its heavily rounded top cover gives the machine a slight retro look. A deep blue strip across the front of the machine serves as a cosmetic highlight.


Paper feeds from a 125-sheet multifunction tray through the printer and onto its top cover. I feel, as I did with the HP Color LaserJet 2820, that it’s a cheapskate approach not to include an internal paper tray as standard. To have to keep the front open and the paper exposed to the elements makes the printer awkward to use. An optional 250-sheet internal paper tray can be fitted under the printer as a neater solution.


A single blue LED on the top cover lights up when the printer is switched on and a series of three red LEDs indicate various error conditions. At the back is a USB 2.0 socket, the only connection in the standard printer, though a network card is another option. 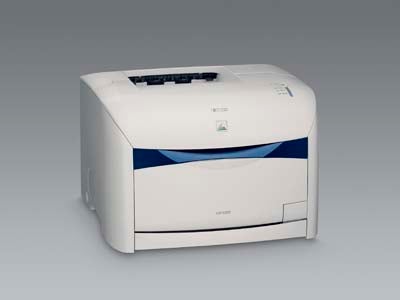 The Laser Shot LBP5200 uses the same engine as HP’s Color LaserJet 2820, which we reviewed recently. Since HP has a long history of using Canon engines in its printers, we believe the engine is a Canon design. It’s pretty straightforward to set up, once you realise the single button on the printer’s top rotates the carousel inside. You slot in each of four toner cartridges, having first fitted the photoconductor drum.


Software installation is very painless, as the driver itself is pretty simple and is the only software supplied with the printer. While it offers all the standard features you would expect in a modern colour laser, it lacks duplex, even as an option.


Just like the Color LaserJet 2820, this is a noisy machine. It sounds as if something’s gone wrong inside, but it hasn’t. It keeps churning out excellent prints, but with a string of noises like something out of Wild Wild West. When unattended, the printer periodically turns its carousel, too, which can be unnerving until you get used to it.

Print times were pretty good for a carousel-based colour printer, with our single page colour text and graphics print taking just 31 seconds. The five-page all-black print took a little longer at 38 seconds, giving a print speed of just under eight pages per minute. The 3 x 5-inch photo took exactly half a minute, which is again pretty impressive. Overall, prints were considerably faster than from the HP machine, using the same engine, but a different software driver.


Print quality is some of the best we’ve seen from an entry-level colour laser, with crisp, sharp black text and well reproduced solid colours, with no noticeable banding. The colours were a little too vivid in comparison with their on-screen counterparts, but at least we didn’t see the blocking effect that the HP machine produced when printing the letterhead of our text and graphics sample. Photo samples were clear and detailed, though there was very slight banding in the sky of our test print. 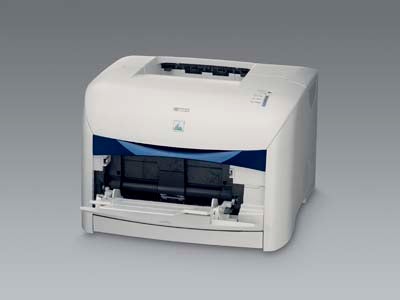 Perhaps because this is a new machine, there are currently few places that sell its consumables, which comprise a photoconductor drum and four colour toner cartridges. The drum unit is rated at 20,000 black pages, or a quarter of that in colour, while there are two capacities of colour toner, 2,000 and 4,000 pages. The black toner comes in a single capacity of 5,000 pages.


As usual, we use the highest capacity consumables to get the best costs possible and in this case that’s 2.15p for a five per cent black page and 8.61p for 20 per cent colour. These figures are based on the RRP prices quoted by Canon, but we would expect to see the costs drop, once the printer has become established. Even these rated costs are not far above those for other machines in this section of the colour laser market, though.


The print quality is excellent and the price is very competitive, two factors which should make the Laser Shot LBP5200 a good buy. Against this, though, is the inconvenience of having the paper tray open all the time, the high noise level when printing and the current scarcity of consumables. Canon will probably fix the last of these as time goes on, but you need to balance the rest before deciding if this printer’s for you.