The IXUS 500 HS is a compact that continues the IXUS range’s tradition of combining striking design with a strong specification. The compact features a 10.1MP, 1/2.3in CMOS sensor and 12x optical zoom, covering a focal range of 28 – 336mm and with  a maximum aperture range of f/3.4 to f/5.6.
The aforementioned 10.1MP CMOS sensor is back-illuminated and thus promises improved performance in low-light conditions. Alongside the back illumination technology sits Canon’s HS technology and DIGIC 5 processor, both of which are tasked with further improving performance in low-light, so you should have no worries in utilising the full extent of the camera’s 100-3200 ISO range. 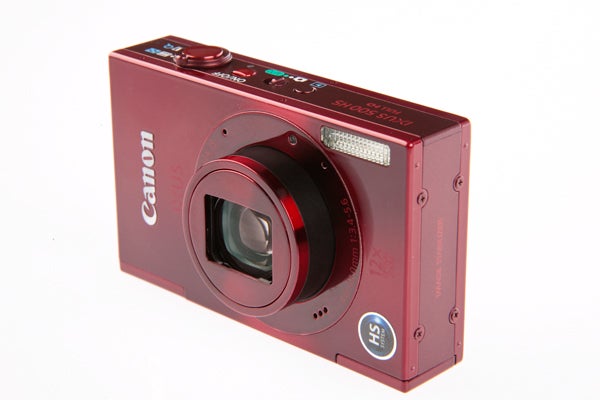 As is often the case with compact cameras with a focus on style, the IXUS 500 HS features a host of Scene modes, as well as Smart Auto shooting mode. The former numbers some 58 different varieties, while the latter will detect the subject you’re shooting and select from one of the 58 options to suit the scene.
The compact also features Face ID technology that allows the camera to adapt shooting settings to a person’s age, with Canon giving the example of turning off the flash for a sleeping baby, or engaging continuous auto-focus for children older than two. 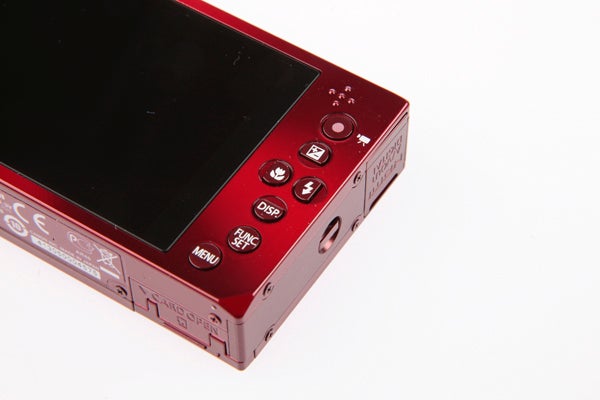 As well the numerous scene modes, the IXUS 500 HS offers a continuous shooting rate of just under 3fps. If you’re willing to accept a reduction in resolution down to just 2.5MP, a rate of nearly 7fps is achievable, with both continuous shooting modes will continue up until the memory card is at capacity.
The IXUS 500 HS offers video capture at a variety of resolutions and frame rates. The headline and most resolute is Full HD of 1920 x 1080 resolution and at a frame rate of 24fps, with movies recorded in MOV format. The 500 HS also features a Super Slow Motion Movie mode – this offers video capture at an impressive frame rate of 120fps, albeit at a much reduced resolution of just 640 x 480 pixels.
Another impressive element of the camera’s specification is the LCD screen. The camera features a 3in LCD screen with a resolution of 461k-dots. Not only does this resolution put it above the standard resolution for a compact, but it also features Canon’s PureColor II G LCD technology, resulting in extra-bright reproduction of images both in capture and review. 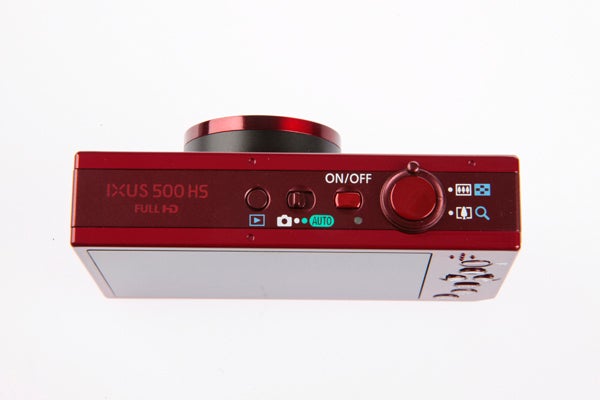 As mentioned in the introduction, the Canon IXUS 500 HS is a truly striking compact camera with regards to design. The compact measures in at just 19.2mm thick at its thickest point, and tips the scales at just 155g including battery and memory card. Part of the reason for being about to keep the size down, yet include such a full specification, is through the utilisation of the smaller microSD type of memory card – a point worth noting as if you don’t already own a microSD card it will be another necessary purchase.
The body is well formed in a rectangular shape, with all eight corners of the body tapering off to a pleasing point. The body itself is comprised of a brushed metal finish which not only adds to the feeling of quality, but also is easy on the eye.
The rear of the camera houses the majority of the camera controls, as well as the striking LCD screen. Canon has dispensed with any form of DPAD controller, and has instead loosely aligned four control buttons – exposure compensation, focus control, flash control and display toggle – in a cross pattern. The four are not only used to access the aforementioned controls, but also to negotiate the menu system – another example of eye-catching minimal design sensibilities. The rear of the camera also houses a dedicated video record button which will no doubt please those looking to capture movies. 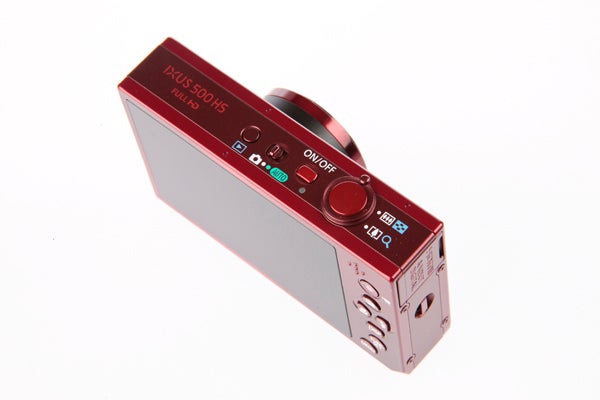 What the Canon IXUS 500 HS possesses in the looks it more than matches it with regards to performance. Considering that the camera is packing a 12x optical zoom, start-up times are assuringly prompt and you’ll go from power off to ready to shoot in a matter of seconds. 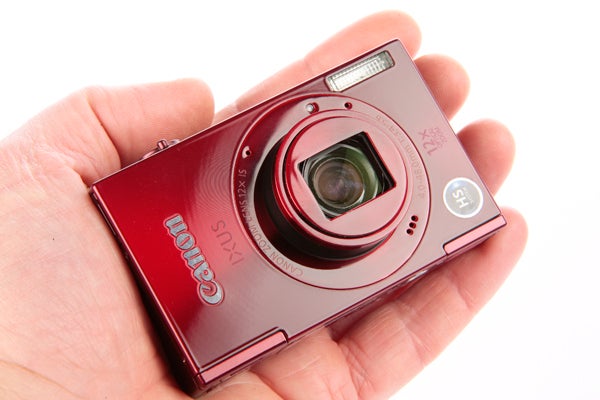 On the subject of the zoom: the camera’s intelligent IS system performs well in use and offers that extra step of stability that will help you get sharp images in low light conditions. The lens, and camera on the whole, also offers good performance in the focus department. AF speed is impressive on the whole, with the range of different focus settings all offering accurate and prompt performance even in difficult lighting conditions. Thanks to the camera’s onboard DIGIC 5 chip, there is little by the way of delay when it comes to the processing of images.
The IXUS 500 HS features Canon’s characteristic menu system, allowing for all the relevant settings to be accessed easily, thus making the capture process both simple and enjoyable.
Image quality is generally good with regards to the IXUS 500 HS. As is often the case with Canon compacts, colours appear on the vivid side of neutral, but not so much as to hamper image quality of the whole. The model’s white balance system also performs well and, although it does err to the warm end of the scale on occasion, once again this is rarely to the detriment of image quality. 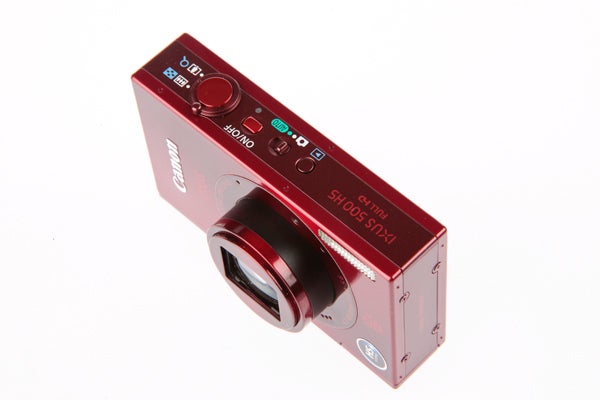 Canon claims that thanks to the presence of its HS technology, as well as a back-lit sensor, you shouldn’t have to worry about noise being an issue at high ISO settings. The good news is that largely these claims ring true, or at least as true as they can be for a compact camera.
Images captured at ISO setting of 400 and below show very little by way of degradation in image quality due to high ISO noise, with only the slightest of softening of fine detail evident owning to noise reduction technology. Once you get above ISO 400, signs of ISO noise to become more evident yet do not destroy images on the whole. Although at ISO 1600 and 3200 noise becomes clear and a touch intrusive, the settings are still more than usable if you’re not looking to enlarge your prints massively.
Other possible areas where image flaw could creep in are also well controlled. For example, there is very little by way of barrel distortion from the large 12x optical zoom and, although there is the slight evidence of softening towards the frame edges, it’s far from intrusive. Fringing is also kept to a minimum and, on the whole, the Canon IXUS 500 HS delivers some excellent images. 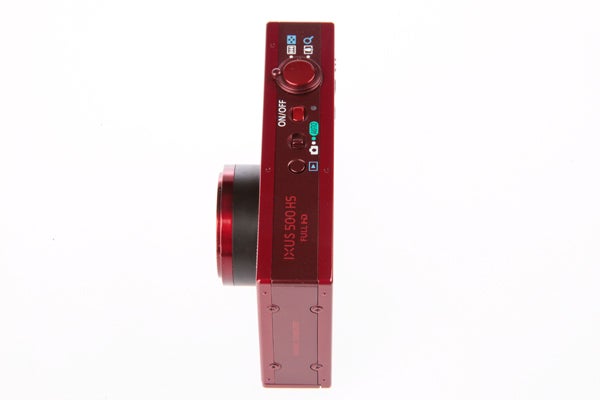 Verdict
The Canon IXUS 500 HS is a compact camera that impresses at first sight. Not only is the model one of the most stylish currently on the market, but it also features a weighty specification to match its eye-catching looks. The combination of 10.1MP CMOS sensor, Canon’s HS technology, DIGIC 5 processor and 12x optical zoom results in both excellent image quality and a versatility up there with more advanced compacts. All of this does come at a price, and there are similarly specified compacts available for less, but if you’re happy to pay the premium you’ll be the owner of an excellent compact camera. 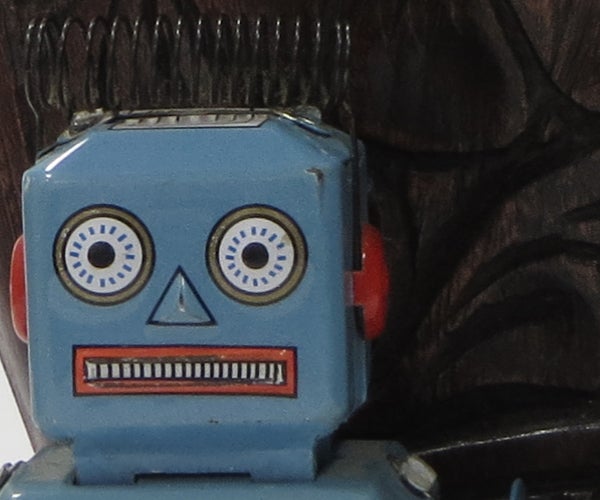 At ISO 100, noise is barely visible 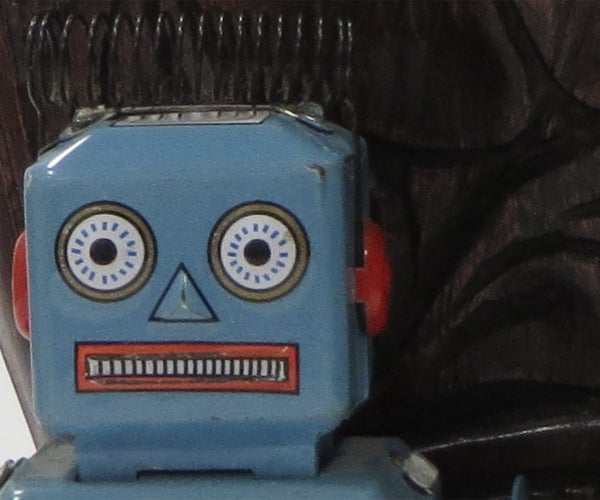 The same is true of ISO 200, with just a slight increase. 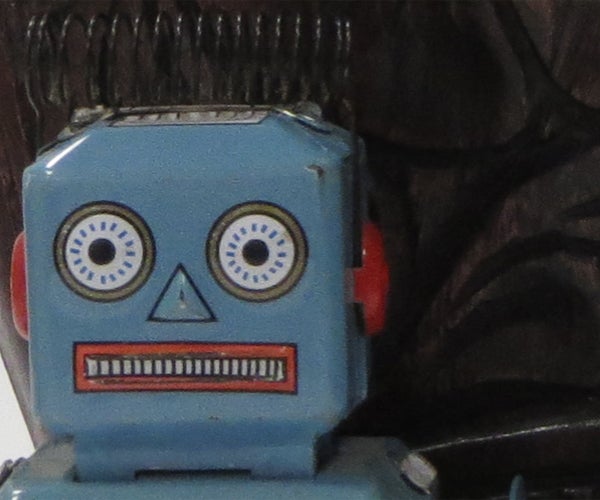 Images show a hint of a graininess at ISO 400, but not to any great extent. 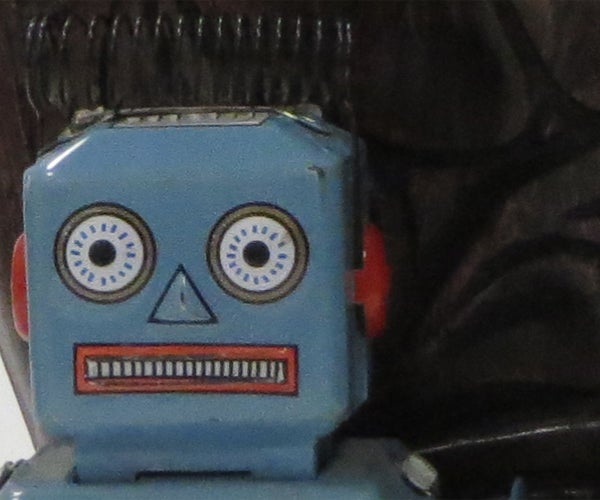 Some distortion begins to appear around finer detail at ISO 800, although once again it’s not to the detriment of image quality. 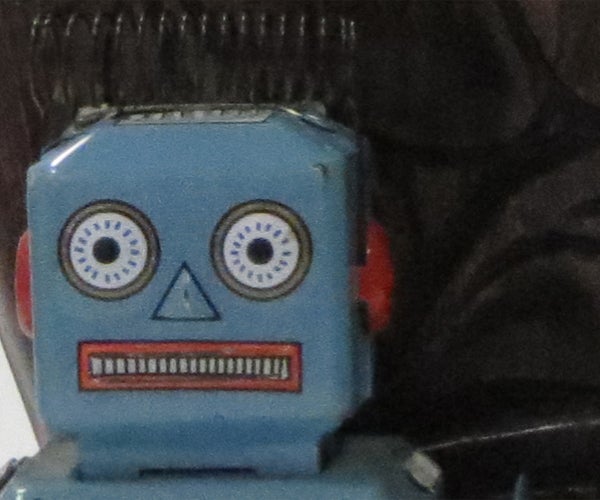 Fine detail softens a touch due to noise reduction at ISO 1600, though once again the high setting is usable. 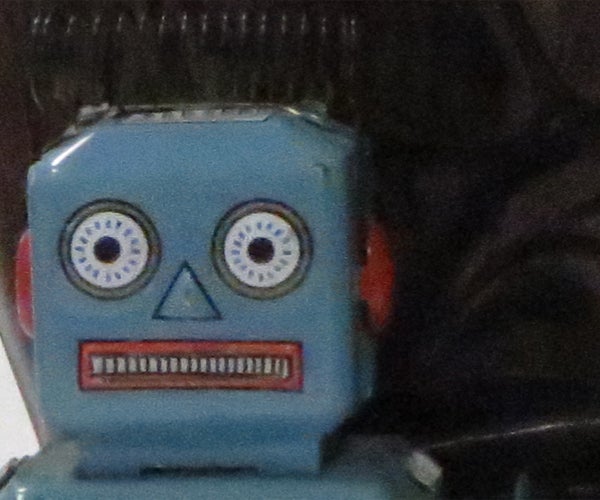 ISO 3200 shows definite smudging of fine detail and overall softening, although it is far from unusable. 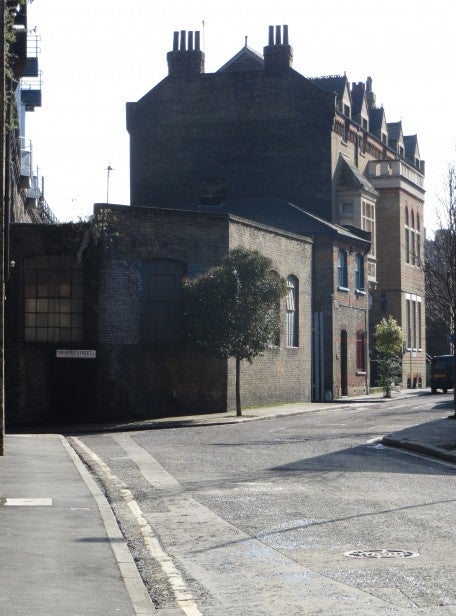 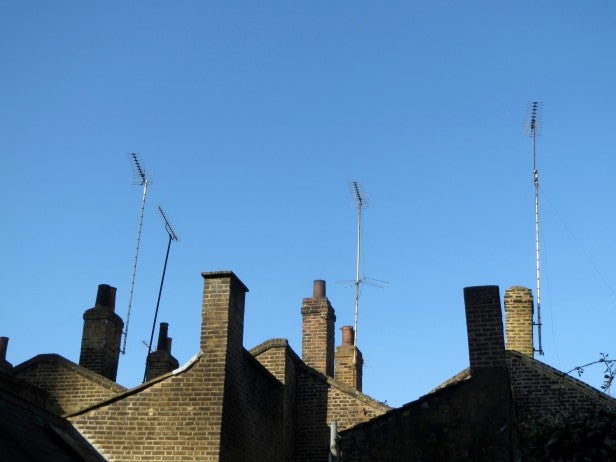 The balance between shadow and highlight detail is well met, and colour is striking yet not overly vivid
1/640 sec @ f/4, ISO 100 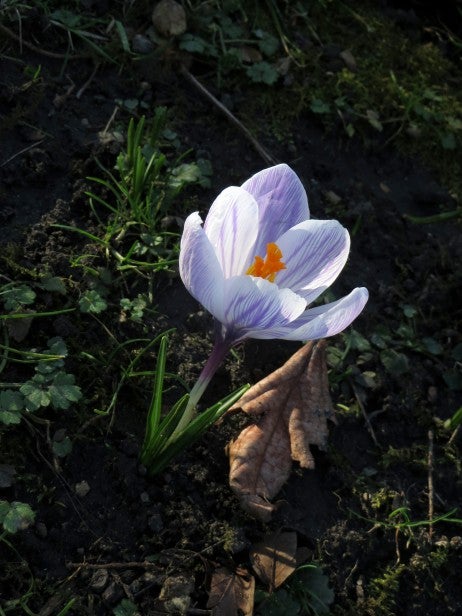