It’s hard to believe that it’s only been ten years since the launch of the first Canon Digital IXUS camera. When I look back at the roughly one thousand cameras I’ve reviewed since then it seems much, much longer. Fortunately my jaded ennui is assuaged somewhat by the arrival of the camera that Canon has launched in celebration of the tenth anniversary of its benchmark luxury compact series. The Digital IXUS 1000 HS is an absolutely brilliant camera, and certainly one of the highlights of the year so far 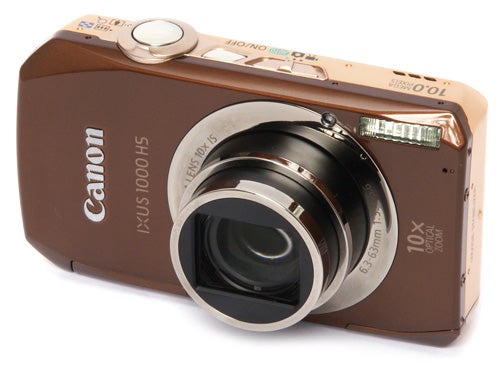 The IXUS 1000 HS is a successor to the IXUS 300HS which was launched earlier this year, and takes over from that camera as the flagship of the IXUS range. The IXUS 1000 HS uses the same 10-megapixel high-speed back illuminated CMOS sensor as the 300 HS, but replaces the fast 3.8x zoom lens with a flush-folding f/3.4 – f/5.6 10x zoom lens equivalent to 36 – 360mm. Also improved is the video recoding mode, which is now full 1080p HD with stereo sound. 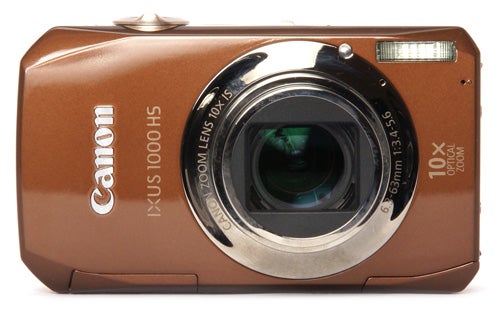 The camera body design is derived from that of the IXUS 300 HS, but is less curvy with angular faceted corners, flat panels and sharp crease lines. Unlike the 300 HS the bottom plate of the camera is flat and broad with widely space feet, and sits on a flat surface without falling over. It is slightly longer and taller than the 300 HS, but it is also slightly thinner, measuring 101.3 x 58.5 x 22.3mm. The lens folds flush with the body, and despite its impressive specification the 1000 HS is surprisingly slim and compact. It’s a bit heavy for a shirt pocket at approximately 191g, but it will slip easily into a jacket pocket or small handbag. The build quality is superb, with a strong all-metal body and solid slide-latching hatches with strong metal hinges. It is a great looking camera, and is available in three two-tone colour schemes; silver/grey, pink/lighter pink or the brown/bronze version seen here.

The 1000 HS is packed with advanced high-tech features, but still manages to have a nice simple control interface which is quick and intuitive to operate. There is a three-position slider switch on the top that selects between the video recording mode, the normal program auto mode, or an extra-easy Full Auto mode, in which most user options are disabled. The zoom control is a rotary bezel around the shutter button, and has a smooth two-speed action depending on how far you move the control. The rear panel controls are very simple, with large well-labelled buttons that blend artfully into the overall design of the camera body. The round D-pad has a rotary bezel, and is also integrated into the body design, giving the whole camera a stylish modern look that is both functional and fashionable. It also handles well; the shape is easy to grip and the controls fall neatly under the thumb and forefinger. 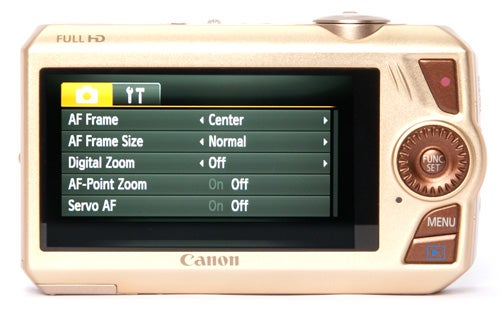 There is one unusual aspect to the design of the 1000 HS. It’s the first compact camera I’ve seen in a long while that has separate hatches for the memory card and battery. It uses a new smaller type of Lithium-ion battery that I’ve not seen before, which is round and narrow and fits neatly into one end of the camera body. It’s lower capacity (870mAh) than the one in the 300 HS, and as a result only has a duration of approximately 150 shots, which is rather fewer than the 250 shot capacity of the 300 HS.


The 1000 HS has a wide range of advanced face and scene recognition features, such as a blink detection warning and an amusing wink-activated self-timer feature. You can set the camera up for group portrait, join the group yourself, and then start a three-second timer by winking at the camera. In practice it required a grimace like a bad Popeye impression to activate it, and then only on the third try, but it’s a great ice-breaker for parties. Other features such as the night hand-held setting work much better, and the optical image stabilisation, available in both still and video modes, is especially good, providing an impressive four stops of extra stability. 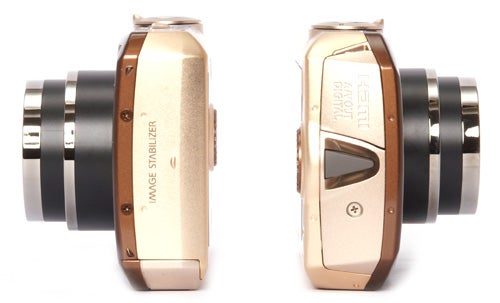 Other cool features include a range of filter effects, such as a fish-eye lens, the “miniature effect” for making photos taken from higher angles look like pictures of tiny models, and a selection of other more common options such as vivid colour, poster effect, a few scene modes and panorama stitching. As with most Canon cameras the 1000 HS has a comprehensive array of colour and tone custom options.


The stand-out feature is of course the full HD video recording, which shoots at a resolution of 1920 x 1080 pixels and 24fps, with stereo audio recorded via a pair of microphones to the left of the lens, the stereo separation isn’t brilliant, but the sound and video quality is very good, and full optical zoom is available during recording.

The Canon IXUS 1000 HS has generally good performance. It starts up and is ready to shoot in a little under four seconds, which is a little on the slow side, and shuts down again in about the same. The shot-to-shot time in single-shot mode is approximately two seconds, which is reasonably quick, but the continuous shooting mode is very quick at approximately 2fps. There is also an AF continuous shooting mode which shoots a frame every 1.2 seconds.

The autofocus system is a little slower than I’d expect from a Canon camera, but it is very reliable and works very well in low light, having no trouble at all shooting an a dimly lit gig. It has a good AF assist lamp with a range of several metres, but it does take a moment to activate.


The IXUS range has always been know for its superior image quality, and the 1000 HS is no exception. The lens is very good, with excellent overall sharpness and producing virtually no wide-angle optical distortion, although there is quite visible chromatic aberration toward the corners of the frame. The sensor produces exceptional detail, and colour rendition is excellent. Dynamic range is quite limited at the extremes of contrast, but closer to the mid-range it is much better, producing great results in decent lighting.


Canon seems to have made some major advances in noise control recently; its recent compacts have produced excellent results at higher ISO settings, and the 1000 HS is a prime example, producing printable images at up to 1600 ISO. Even the maximum 3200 ISO setting produces good colour and exposure, and would be useful for smaller applications such as email and websites. 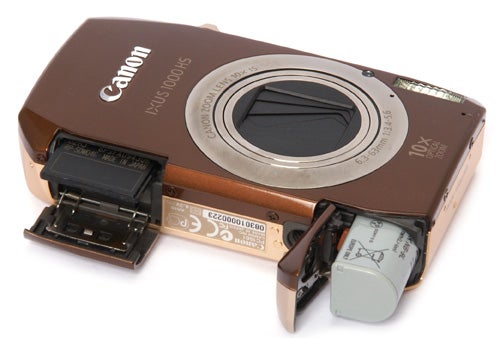 The IXUS 1000 HS represents exactly the sort of design philosophy the digital camera industry needs to take it forward. Rather than just squeezing in ever more pointless megapixels, Canon has instead concentrated on new sensor and processor technology, and on giving its cameras genuinely useful features such as good low-light performance, a versatile high-quality lens and advanced scene recognition technology that actually helps to take better pictures. The 1000 HS has some of the best high-ISO results of any current compact camera, as well as excellent interface design and superior build quality. It’s not perfect, and that 150-shot battery life is definitely an issue, but the IXUS 1000 HS is one of the best all-round compact cameras on the market, and a fitting way to mark the first decade of digital IXUS cameras.

The Canon Digital IXUS 1000 HS is possibly the best all-round digital compact on the market. It looks great, is solidly well made, handles extremely well and is loaded with advanced features. Image stabilisation is superb, and full HD video with stereo sound is a bonus. Performance is above average and image quality is very good, especially at higher ISO settings. The only drawback is the limited 150-shot duration of its smaller battery. 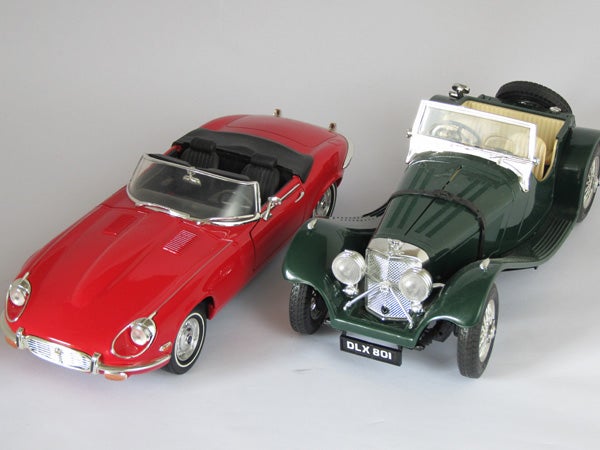 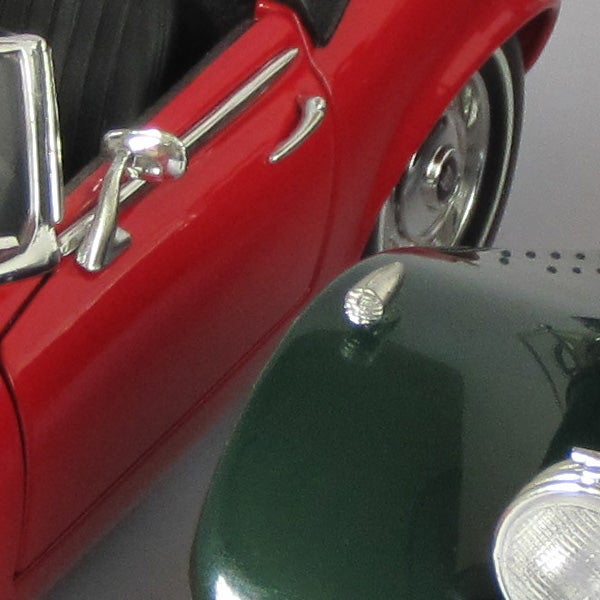 At 125 ISO the picture quality is excellent. 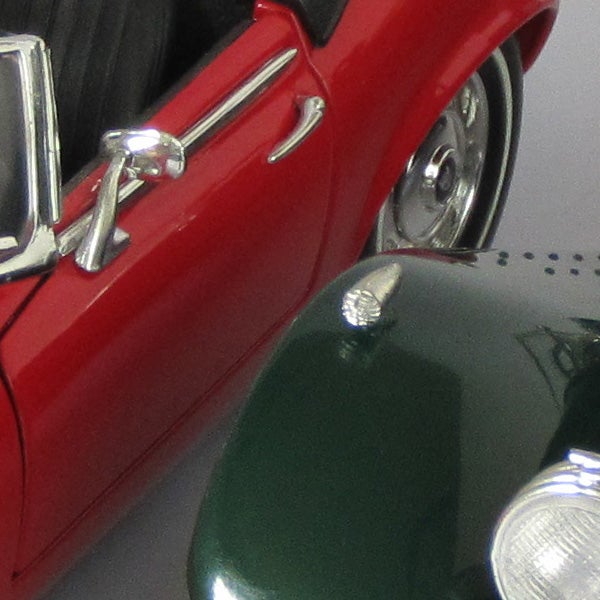 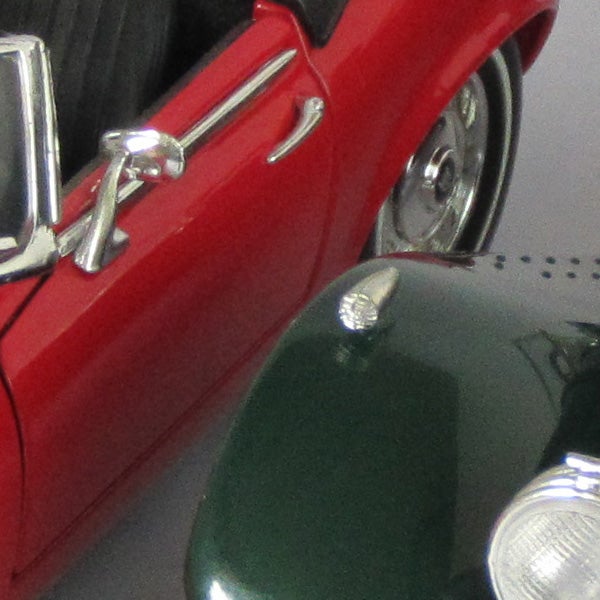 A light dusting of noise at 400 ISO, but overall quality is still very good. 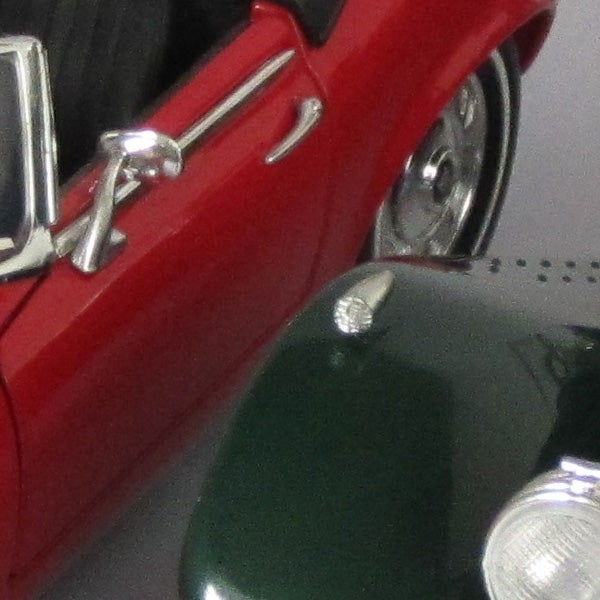 Still decent quality at 800 ISO. Some detail has been lost, but colour and exposure are fine. 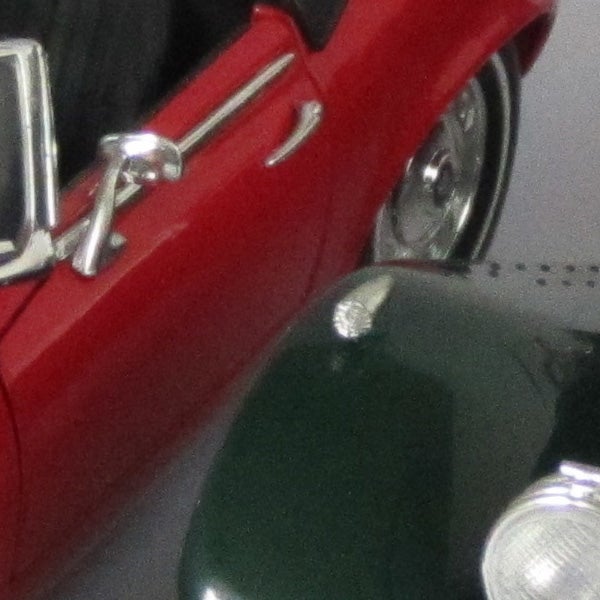 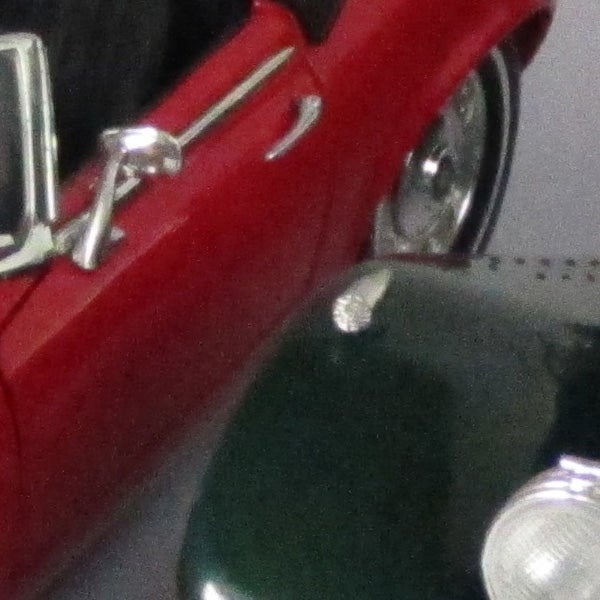 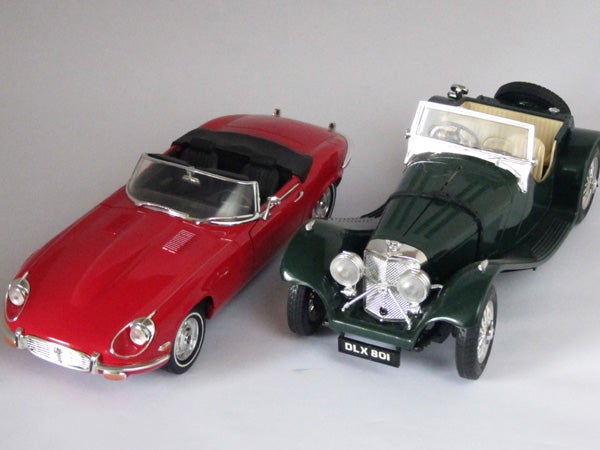 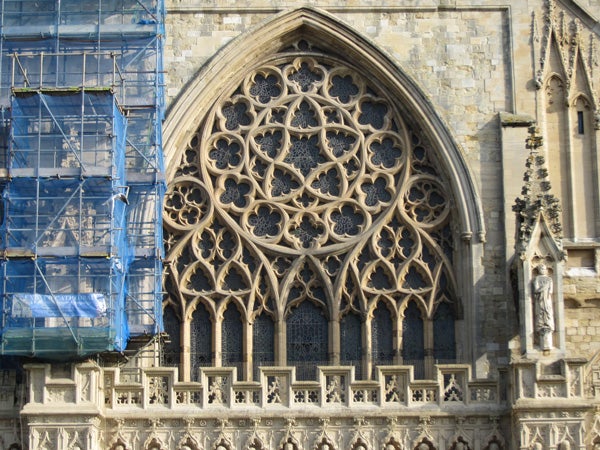 Here’s the usual detail test shot of the West Window of Exeter Cathedral, for you to compare with other cameras. See below for a full res crop, or click to see the whole picture. File size 3.26MB 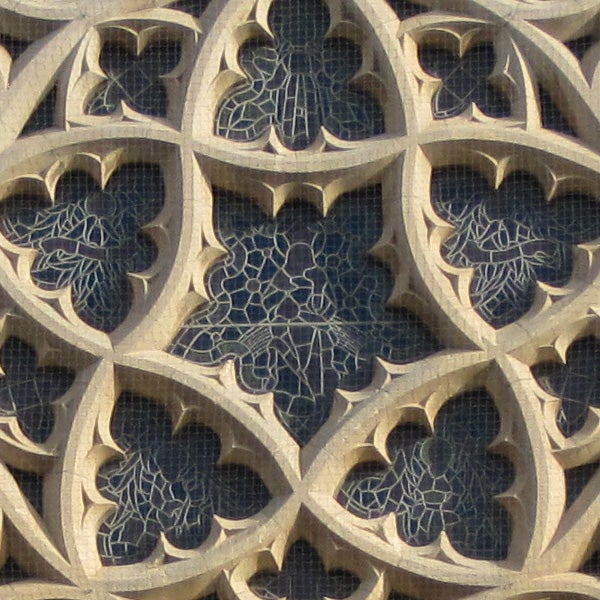 The level of detail is excellent. 10MP is really all you need in a small-sensor compact. 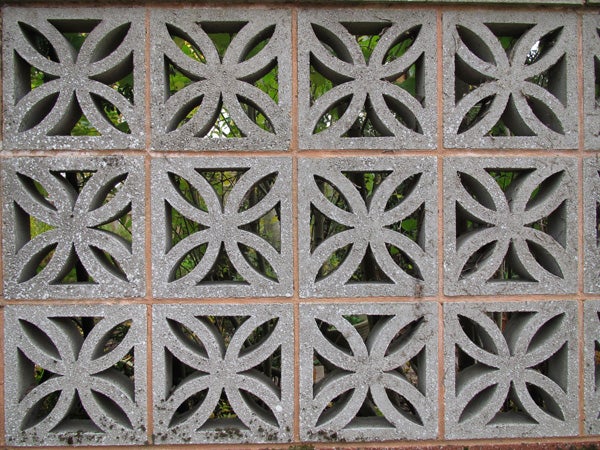 The lens produces almost no distortion at wide angle. 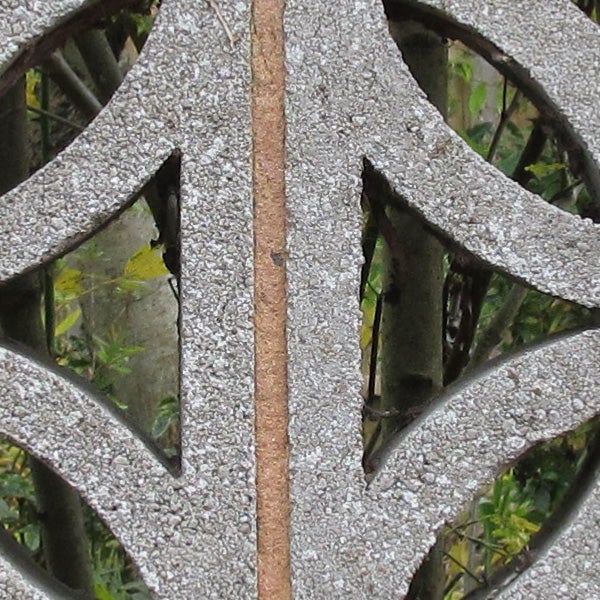 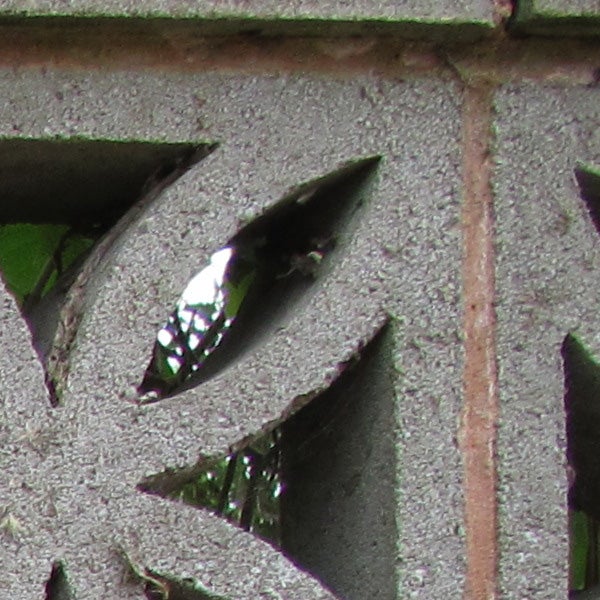 Corners are also sharp, but there is some chromatic aberration. 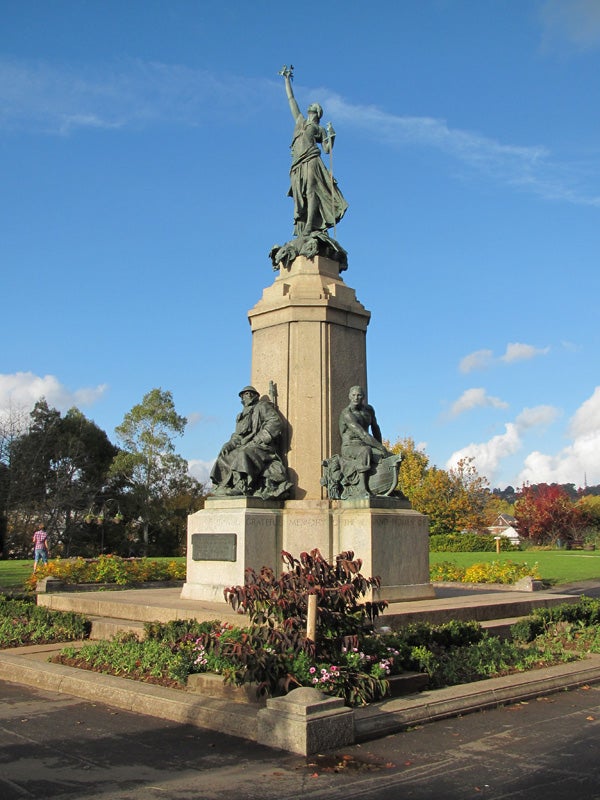 The wide angle end is equivalent to 36mm. 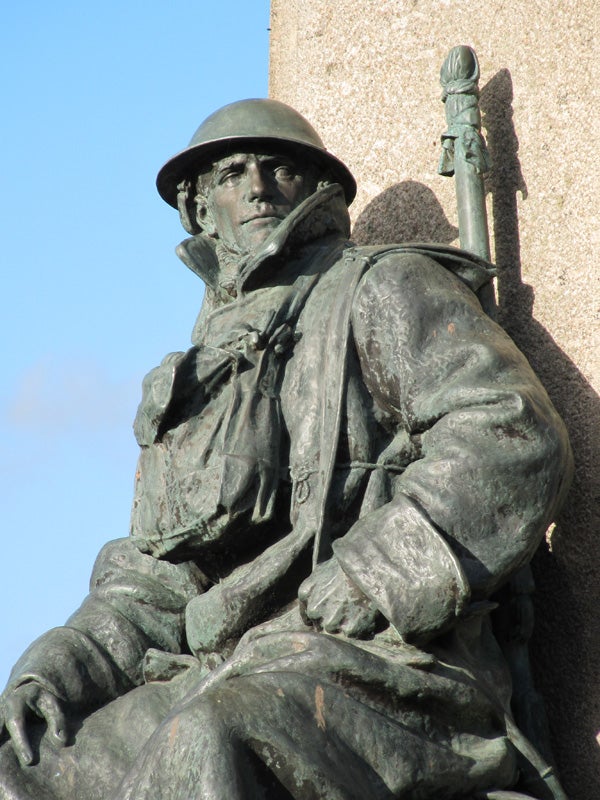 The telephoto end of the 10x zoom is equivalent to 360mm. 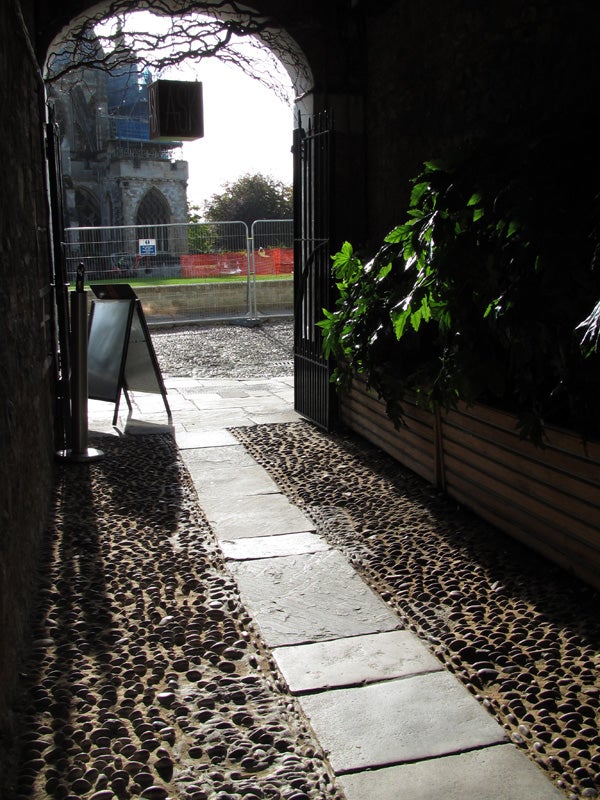 Dynamic range is a bit limited, although to be fair this is a very high contrast situation. 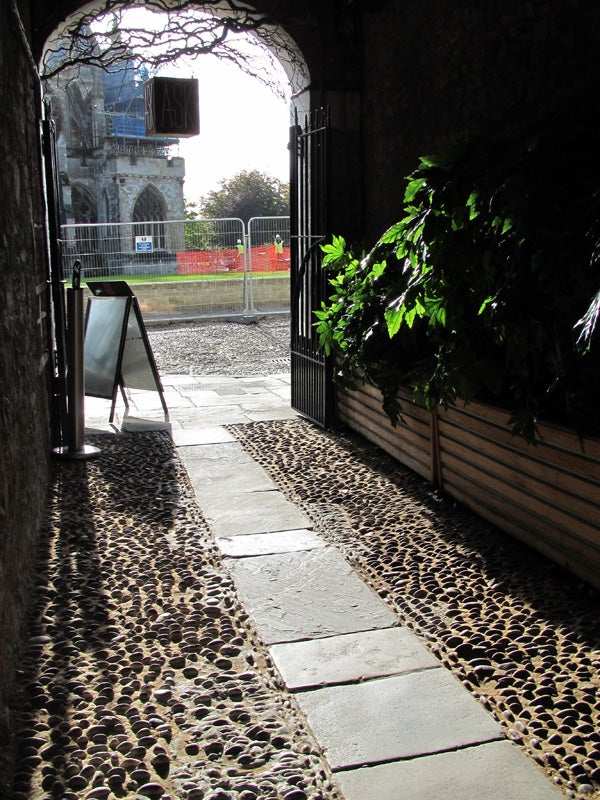 Even the i-Contrast setting doesn’t help much in this situation. 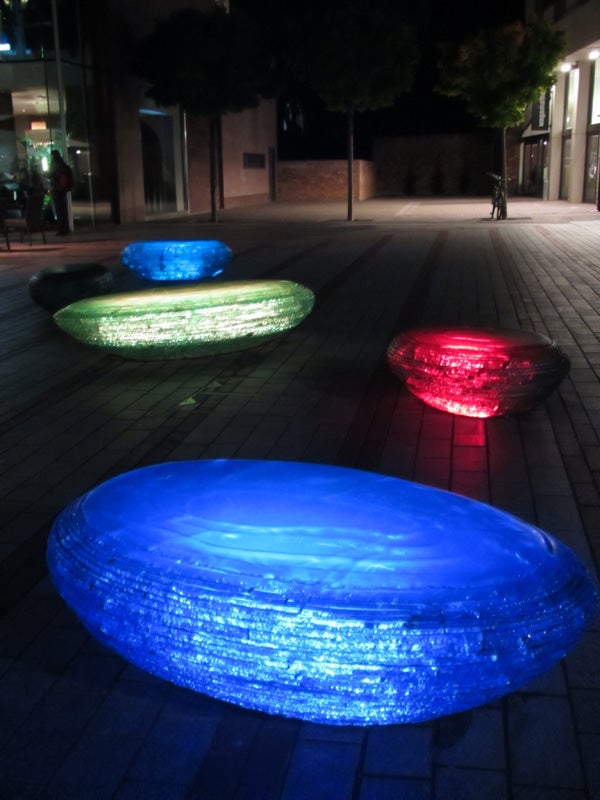 Autumn colours are here again; I feel a tutorial coming on…