Canon has lagged behind Sony in bringing out high definition camcorders – but then so has every other manufacturer, at least in the European market. It has also avoided the hard disk recording format (see our guide to all the new camcorder formats), where both Sony and JVC now compete.


With the HG10, however, Canon shows that it was really biding its time, waiting for the right moment. The HG10 is Canon’s first hard disk camcorder, and it’s a high definition model too. But it’s also available for under £700 already, if you find the right shop. So can it take away the limelight from Sony’s HDR-SR8E? 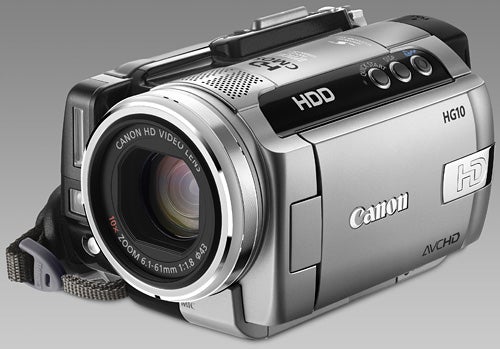 On paper, the HG10 has a great pedigree. It uses the same 1/2.7in 2.96-megapixel CMOS sensor as Canon’s excellent HV20 HDV camera. The HG10 also sports the same F1.8 Canon lens as the HV20, with the same 43mm filter diameter. It keeps the high-end optical image stabilisation, too – which is a great feature for the price.


However, as the HG10 relies on a 40GB hard disk to store its video, Canon has switched to MPEG-4 H.264-based AVCHD compression for this model. This has a reduced data rate compared to the MPEG-2 compression used by the HDV format. The HG10’s top quality mode, HXP, runs at 15Mbits/sec, where HDV requires 25Mbits/sec. This is the same as Sony’s hard disk-based models, such as the HDR-SR8E. Even at this top setting, the Canon’s 40GB hard disk is enough for around 5.75 hours of video – a very healthy amount. 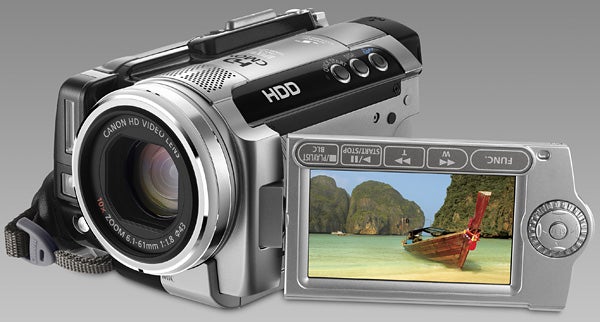 
At first glance, the HG10 looks like it is lacking an important feature for the video enthusiast – an accessory shoe. But Canon has cleverly concealed it beneath a little plastic cover. Slide back the viewfinder (which has an arrow and the word ‘Pull’ on it), pop off the plastic cover, and a standard accessory shoe is revealed. The HG10 also has a microphone minijack on the front and the AV Out minijack doubles as a headphone socket. Only a lens ring for manual focus is missing, instead relying on the LCD joystick. This is also used to turn on the built-in video light and the 12-step exposure control.

The HG10 uses Canon’s fast-access menu for most other functions. You can choose between Program AE, shutter priority, aperture priority, Cinema mode and eight scene modes, including Portrait, Sports, Night, Snow, Beach, Sunset, Spotlight and Fireworks. You can vary the shutter from 1/6 to 1/2000, and aperture from F1.8 to F8, but not independently as only priority modes are available. You also can’t use either with the Cinema mode, as this is an option on the same menu.

The function menu also houses no less than six white balancing presets, as well as automatic and manual options. There are five image effects, which are basically sharpening/softening presets, plus a selection of digital effects. You can even switch between the four recording qualities from here. If you do delve into the full menu, there’s also a progressive shooting mode to be found, so you can record 25 frames per second instead of 50 interlaced fields.


Since it has the same CMOS sensor and optics as the excellent HV20, we were expecting great things from the HG10. On many levels, it lives up to our expectations, too. The brilliant colour fidelity of the HV20 is carried forward, with a vibrant but not over-saturated image. However, AVCHD does have a tendency to show more artefacts than HDV, and this was evidenced by a slightly less sharp picture, even in very strong outdoor lighting, which was even more obvious with moving objects. 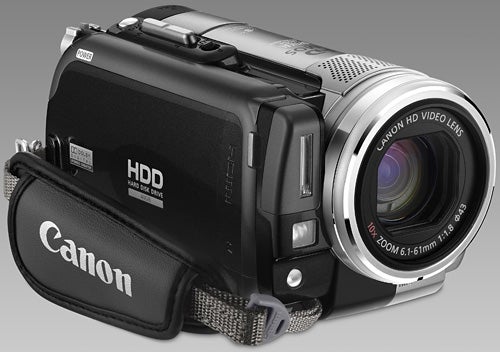 In low light, the HG10 fared surprisingly well, and actually exhibited marginally less noise than the HV20, but the image was still not as sharp overall. Switching to progressive mode had a similarly beneficial effect on colour in low light with the HG10 as it did when we tested the HV20. Unfortunately, where we loved the progressive shooting mode of the HV20, which improves image quality without any obvious loss in smoothness during motion, the same cannot be said of the HG10. Turning this mode on with the HG10 resulted in jerky pans and very laggy response from the LCD. As a result, we wouldn’t recommend using it, so you won’t be able to take advantage of its benefits for low-light shooting.

Canon has chosen an opportune time to embrace AVCHD, now that the format has become more widely supported with mainstream editing software. Adobe is still conspicuously absent, but at least you can choose between Ulead VideoStudio 11 Plus or Pinnacle Studio 11 Plus – two of the leading entry-level editing apps. We had no trouble importing video into Ulead VideoStudio 11 Plus. In the box, Canon only includes a Corel application disc with DVD MovieFactory SE, which can burn AVCHD discs but isn’t particularly advanced for video editing. 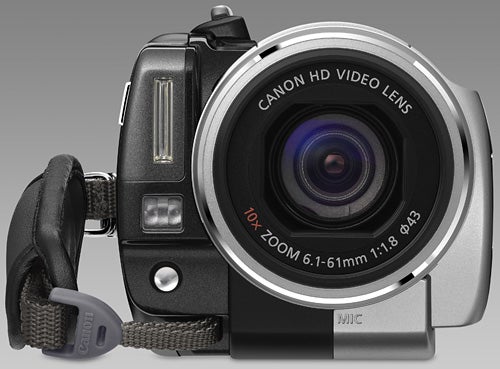 Aside from the USB connection required for copying video to a PC, which resides under the LCD panel, the HG10 has a full complement of analog connectivity options. These include a minijack for composite and RCA audio, but not S-Video. There’s a proprietary jack for component, and the now-ubiquitous HDMI socket. However, all these connections are output only, and the HDMI socket is of the mini variety, so an adapter will be required before you can plug the HG10 into your HDTV, as none is supplied in the box.


Although the HG10 doesn’t bowl us over quite as much as the HV20, it’s still an impressive piece of kit. Sony’s lower end HDR-SR5E undercuts it on price considerably, but misses out key features such as a standard-sized accessory shoe. The more fully featured HDR-SR8E is much more expensive. The HG10 beats either on video quality, particularly in low light, and it has enough features to attract the more serious video-maker. So, not the perfect high-definition camcorder with a hard disk. But the best we’ve seen yet.