There seems to be no end in sight to the pointless progression of ever-higher resolutions for compact camera sensors, in fact just last month Sharp announced the development of a 12-megapixel 1/1.7in CCD that is sure to find its way into a production camera within a few months. Despite this, or perhaps because of it, the fastest-moving sector of the digital camera market is still 6-megapixel, 3x zoom pocket compacts. 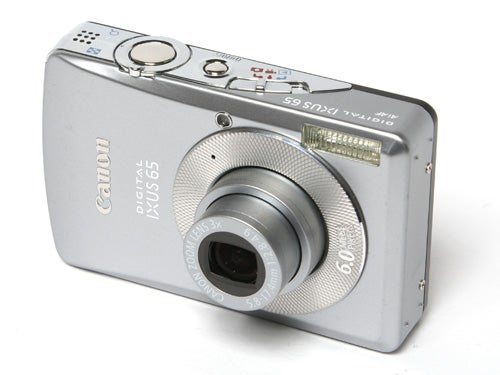 In my opinion, and I’m not alone in this, 6-megapixels is pretty much the perfect resolution for a compact camera. It gives roughly the same level of detail as 200 ISO 35mm colour negative film, good quality prints at A4 size and photo quality at 10 x 8in, and 6-megapixels sensors generally have better dynamic range and lower image noise than 10-megapixels sensors of the same physical size. Also, perhaps because the camera companies seem to regard them as obsolete, many very good 6-megapixel cameras are available for bargain prices.


Take this Canon IXUS 65 for example. Canon’s IXUS range has always been at the luxury end of the compact camera market, with models like the IXUS 850 IS at the cutting edge of photographic technology and costing nearly £300. By comparison the IXUS 65 is practically a budget model, costing around £235 on the high street or about £170 online. Despite this it has the same stylish and innovative design, exemplary build quality and outstanding performance as its more powerful stable mates. Its price matches well with the wide range of other cameras in the same area of the market, such as the Casio Exilim EX-Z70 (£179), Fuji FinePix F30 (£179), Nikon Coolpix S9 (£179), Olympus mju 700 (£163), Pentax Optio S6 (£185) and Sony Cyber-shot DSC-W50 (£146). 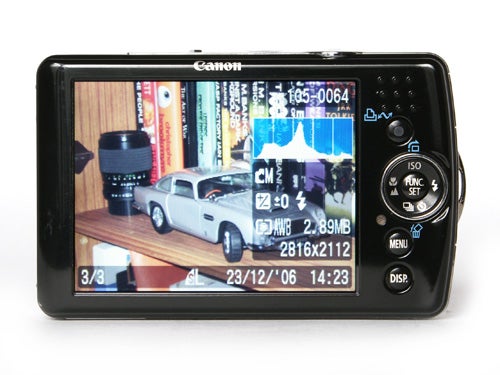 Like the other cameras in the IXUS range, the 65 has a strong all-metal body and outstanding build quality, with one major exception. The battery/card slot hatch is desperately flimsy and poorly designed, and I nearly snapped it off a couple of times myself.


The 5.8-17.4mm (35-105mm equiv) f/2.8-f/4.9 lens retracts flush with the body, and the various controls are also partly recessed. The only thing that sticks out slightly is the end of the zoom control, and that’s only by a millimetre or so. Measuring 90.3 x 56.8 x 20.2mm and weighing 145g it is one of the slimmest and lightest cameras in its class, and is pretty much the perfect size and shape to slip in your pocket for a night out.

The back of the 65 features a large 3in LCD monitor, the largest on any current Canon camera. With 173,000 pixels it’s not especially high resolution though, and its reflective surface may cause problems when using the camera in bright sunlight. Unfortunately since everywhere south of Sheffield is currently under a five-mile thick layer of cloud, I can’t test this for certain. 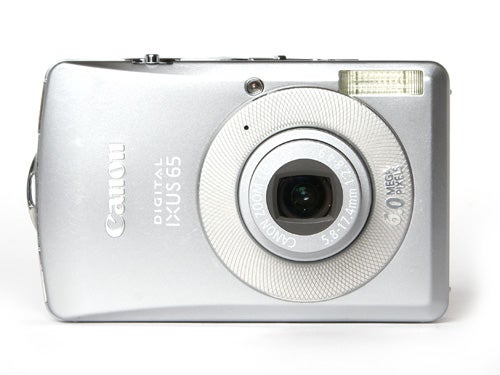 The big monitor doesn’t leave a lot of room on the back for anything else, but the designers have made the most of it by putting most of the controls such as ISO setting, macro focusing, flash mode, continuous shooting and the self-timer around the D-pad, or “Touch Control Dial”. This control is a bit unusual, and consists of a ring around the central function/set button, rather than the more usual array of four buttons. Light pressure on the ring activates a display on the monitor indicating which function is being altered. Fully pressing the control cycles through the list of options for that setting.


Personally I found that the Touch Control was a little too sensitive, and since it is quite close to the thumb grip on the back panel I did accidentally alter the ISO setting a couple of times. However I have very large hands, so others may not find this to be a problem. The rest of the controls were quick and responsive however, and the camera is very easy to use.


Like all of Canon’s compact cameras, the 65 has a function menu that gives quick access to the main shooting options, such as exposure compensation, white balance, colour mode, metering mode, compression and picture size. The main menu is reserved for infrequently used settings such as turning off the digital zoom or activating the composition grid on the monitor. 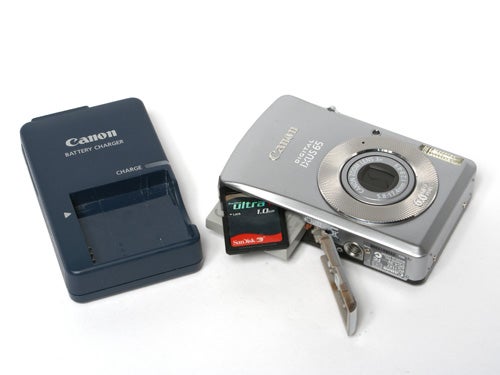 The IXUS 65’s overall performance is exceptional. It starts up in about a second, wakes from standby in about the same, and in continuous shooting mode at maximum quality and image size it can rattle off an impressive two frames a second and keep it up until the memory card is full. JPEG files are around 3.5MB, which shows a lower than average rate of image compression, and means that a 1GB SD card will be enough for at least 361 pictures.


The video mode is also good, shooting at 640 x 480 (VGA) resolution at 30 frames a second, or at 320 x 240 resolution at 60fps, useful for capturing high-speed movement such as sports activities.

Canon AF systems are always very good, and the IXUS 65 is no exception. Regardless of the lighting conditions its nine-point AiAF system focused quickly and accurately, even in total darkness thanks to an AF illuminator, although the range of this was limited to about two metres. The flash is good too, with a range of 3.5m and excellent frame coverage at wide angle. 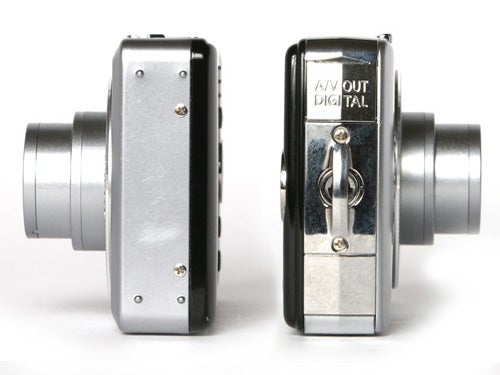 One concern however is the camera’s limited battery duration, since at only 760mAh the Lithium-ion cell is quite small by recent standards. Canon claims only 160 shots on a full charge, and this seems to be about right. I got just over 140 shots on a first charge with a new battery, but Li-ion cells do improve after a few cycles.


I found only one real problem with the IXUS 65, and it’s one that I wouldn’t have expected from a camera like this, especially from Canon. Unfortunately the picture quality is quite poor under any but the ideal circumstances. I found that shots suffered from a number of faults, including chromatic aberration, purple fringes, corner blurring, wide-angle spherical distortion, frequent over exposure and very bad image noise at settings as low as 200 ISO, all of which rather shoots down the argument about the innate superiority of 6MP compact sensors. 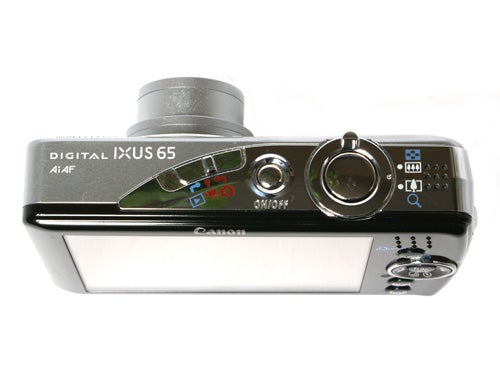 This is a pity, because I really wanted to like this camera. It has style, performance, build quality, value for money and the solid reputation of the Canon brand name, however its very poor photographic performance lets it down badly.


The Canon IXUS 65 is a potentially lovely little camera which could have been one of the best pocket compacts on the market, with great build quality, stunning performance, attractive but functional styling and good value for money, but sadly it is let down by a number of major image quality issues, especially high-ISO image noise. 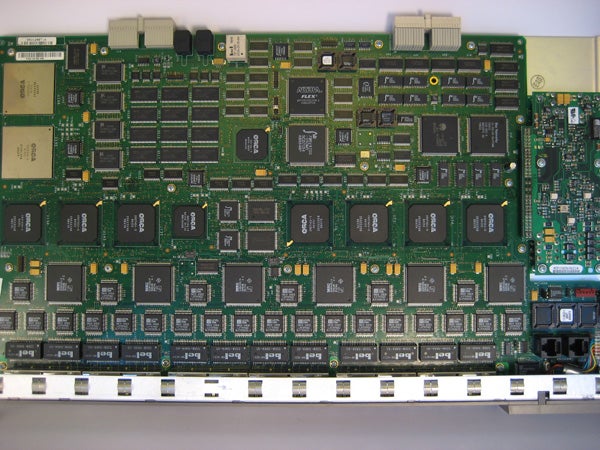 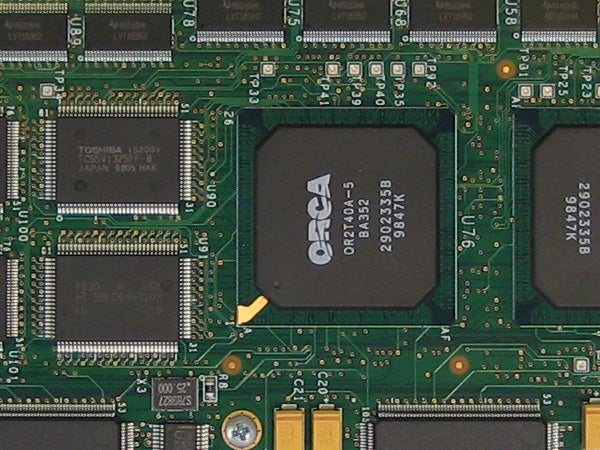 At 80 ISO the image is clean and noise free, as one might expect. Make the most of it, because it won’t last. 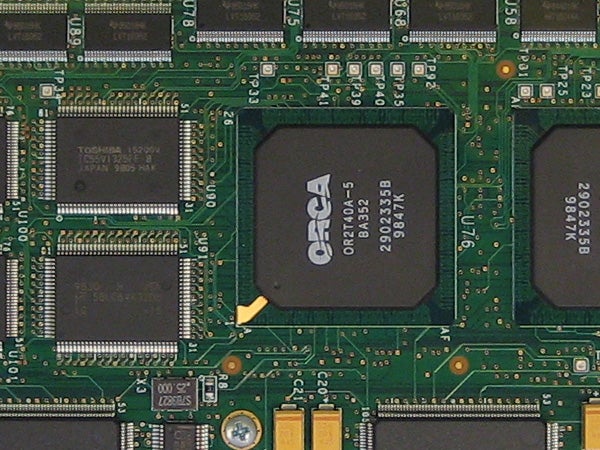 Just 1/3rd of a stop faster at 100 ISO and already there is a hint of image noise visible in this shot. 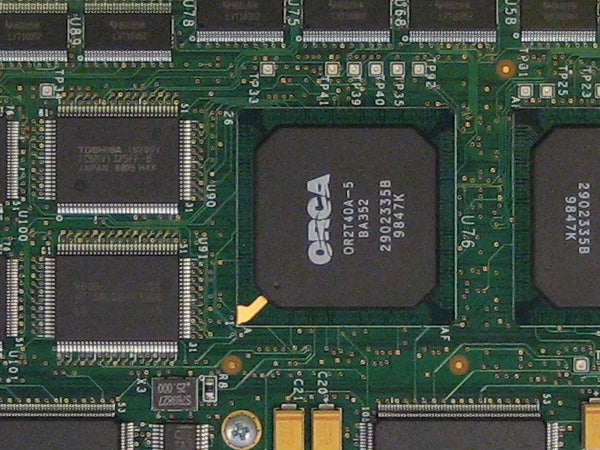 At only 200 ISO there is visible image noise and colour speckling in the mid-tone and darker areas of this shot. A surprisingly poor performance from the usually unassailable Canon. 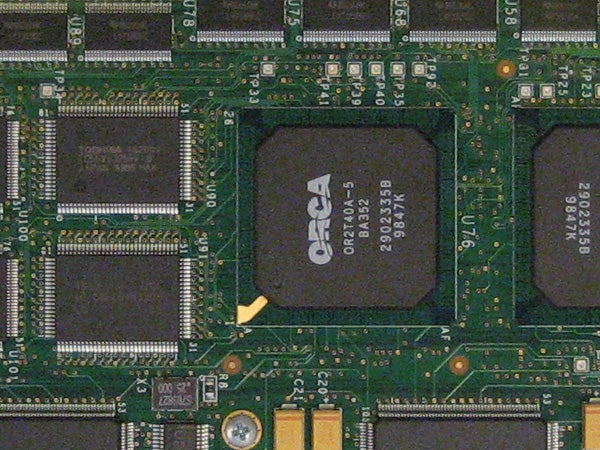 At 400 ISO the image noise has wiped out a lot of fine detail and reduced picture quality to almost unusable levels. 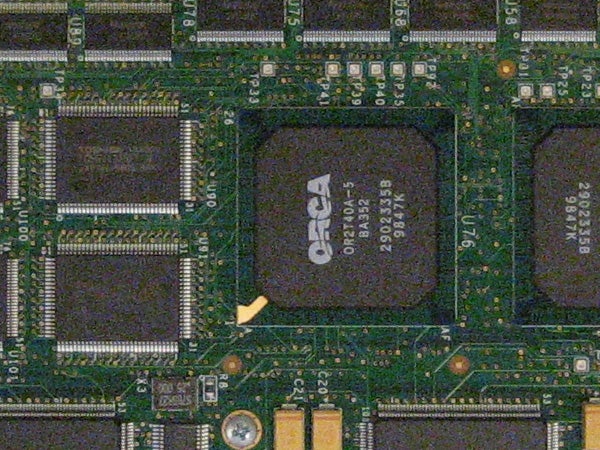 At 800 ISO the image is covered in very severe noise and colour distortion. Fine detail has been utterly lost in the haze and the picture is unusable. 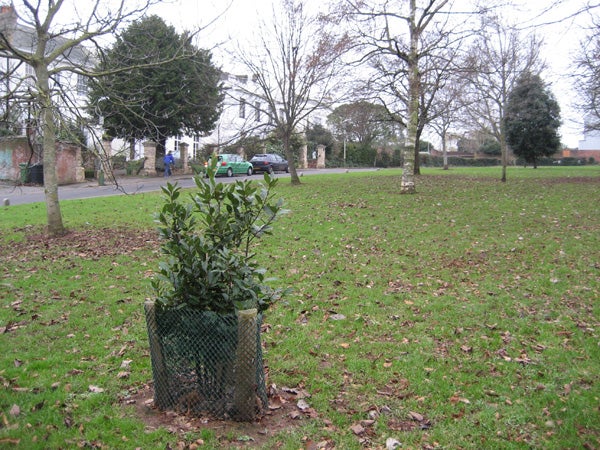 Although this was shot under heavily overcast conditions, when it’s almost impossible to take a decent photo, this doesn’t excuse the over-exposure, blurred corners or purple fringing visible in the upper corners of the shot. 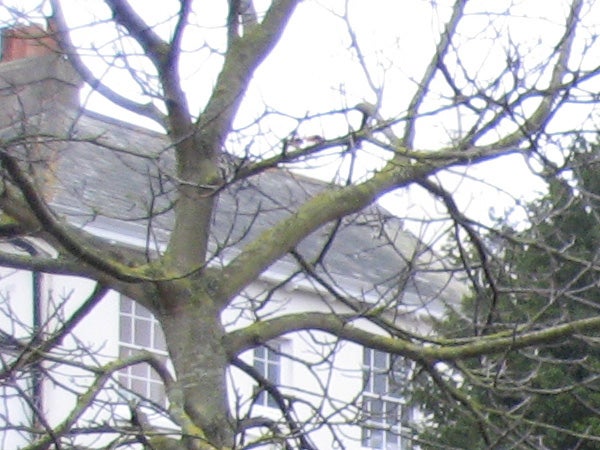 Here’s a 100 per cent crop of the top left corner of the previous shot, showing the severe purple fringing around the tree branches. 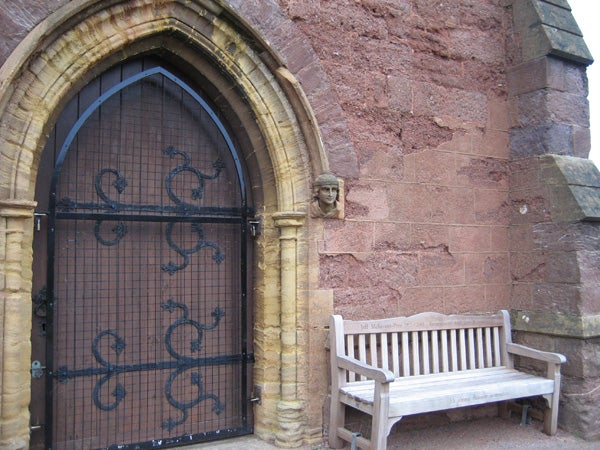 Again, this was taken on a very overcast day, but it is still badly under-exposed. The level of detail in the centre of the frame is good though. 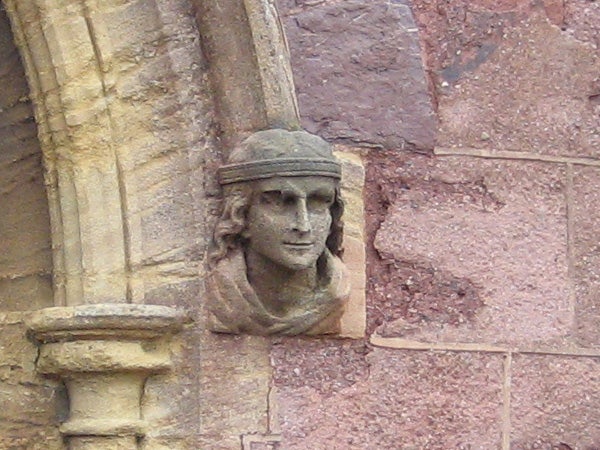 A 100 per cent crop from near the centre of the previous shot, showing the level of detail that the 6MP sensor can capture. 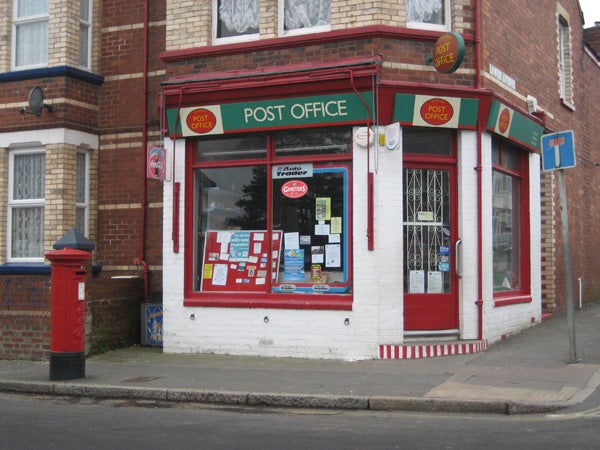 The normal colour mode has produced a pale and washed-out shot, although the lousy weather didn’t help. 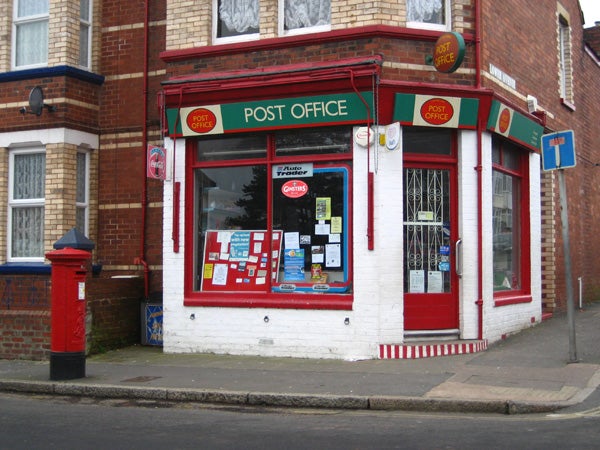 In the Vivid colour mode the saturation level is dramatically increased, producing a much brighter shot. 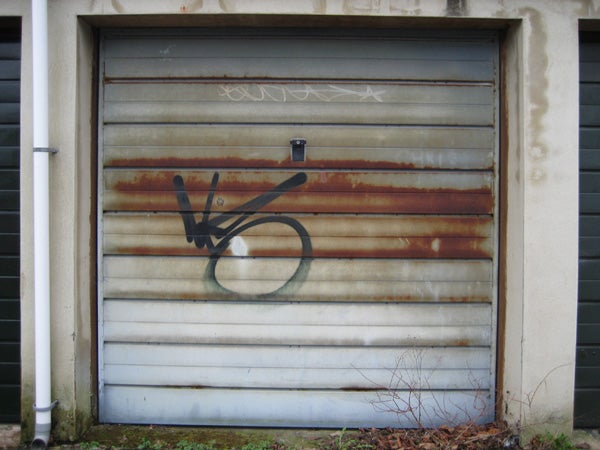 Oddly, the left hand side of the lens seems to produce much less spherical distortion than the right, although all the corners are blurred. 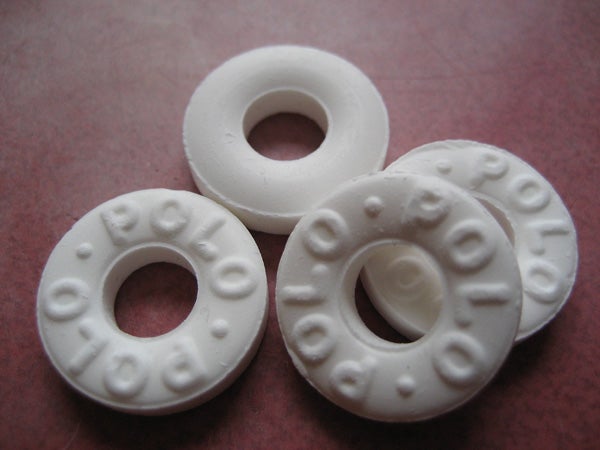 The IXUS 65 has a minimum focus distance of 3cm, which is useful for good macro shots.