Cambridge Audio recently wowed us with the 751BD, a premium Blu-ray player that not only boasts astonishing build quality and performance but also throws in a bunch of hi-tech features that high-end brands normally overlook. The 651BD is a more affordable version of the 751BD with a few of the luxuries taken away, but at around £500 it’s still a significant investment – let’s find out it it’s justified.

You certainly get your money’s worth as far as design and connections are concerned. Like its bigger brother, the 651BD’s build quality is exemplary. The deck’s bodywork is a super-sturdy wrap-around metal casing manacled to a low resonance, acoustically damped chassis. In other words, vibration take a hike.

It’s gorgeous too. The fascia is a thick, brushed charcoal-grey affair, with only a smattering of buttonry and a USB port plugged up with a rubber dust cap. The display panel blazes bright blue, giving pertinent information in full words, plus the central disc tray slides out smoothly and purposefully. It’s one of the best-made Blu-ray players we’ve encountered at this price.

Even the most demanding socketry needs are catered for on the rear panel. Stars of the show are the two HDMI v1.4 outputs, which is a thoughtful touch – people who haven’t yet upgraded their AV amp to one with HDMI v1.4 inputs can’t enjoy 3D images and HD audio at the same time, but with two outputs you can send pictures and audio bitstreams separately.

Other sockets include a full set of 7.1-channel analogue outputs – another lifesaver if you’re amp is of a pre-HDMI vintage – and a port for an e-Sata external hard-drive, which allows you to play digital media. A second USB port is also found on the rear, providing another means of playing back digital content from HDDs and flash drives. You don’t even have to use this port for BD Live storage, as there’s 1GB of memory built right in.

Rounding up the rest of the sockets, we find component, optical and coaxial digital audio outputs, plus an Ethernet port, RS-232 and an IR emitter input. The Ethernet port is crucial if you want to access BD Live content or the uPnP streaming feature, as the deck sadly doesn’t support a Wi-Fi dongle, which is disappointing at this price.

The deck’s impressive construction continues under the bonnet, with an array of high-grade components. Most interesting is the Marvell DE2750 QDEO video scaler (for the primary HDMI output), a Mediatek MTK8530 video decoder and Cirrus Logic CS4382A eight-channel audio DACs (192kHz/24-bit).

Strangely, Cambridge Audio’s website makes no reference to it, but when hooked up the internet the 651BD can access YouTube videos through a dedicated web portal, as well as Picasa. 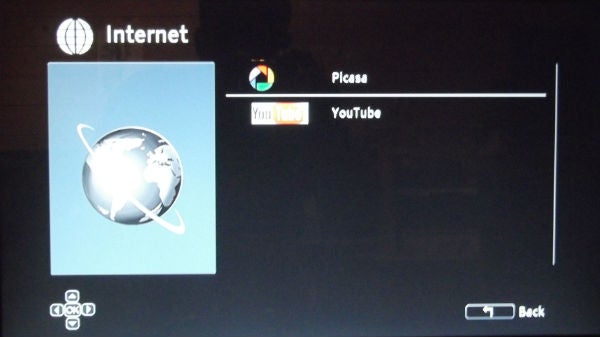 It’s unlike any YouTube portal we’ve encountered before, using a simplified layout that allows you to search by keyword and then browse videos lined up in a row along the bottom of the screen. Featured videos start playing automatically when you fire it up, which is a bit annoying. It’s easy to follow but the sluggish cursor on the virtual keyboard makes it a chore to use. Picasa uses a straightforward layout, with bright, crisp menus.

You can also stream movies, music and photos from devices on your home network using uPnP, which works smoothly once the deck recognises your intended device (which took us a while achieve).

The 651DB supports 3D and 2D Blu-ray discs, as well as CD, DVD-Audio and SACD, which is sure to delight audiophiles. And with a Pure Audio Mode to quell any unwanted signal interference, this deck has some serious sonic credentials.

Of course it also decodes all of Blu-ray’s audio formats – Dolby True HD and DTS HD Master Audio being the most important – and pipes them to an AV receiver as PCM or in bitstream form. 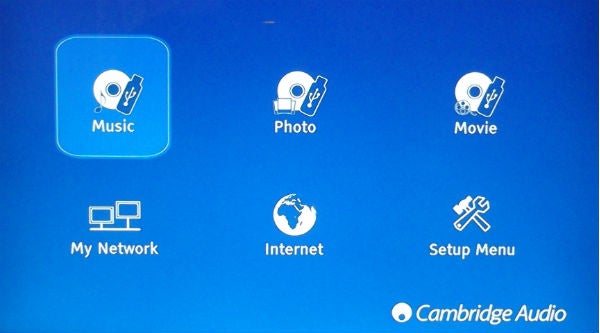 Despite being a deck aimed at those in the know, the 651BD is surprisingly easy to use. The onscreen menus are excellent – clear, logical and attractive. Hit the Home button on the remote and a simple blue background appears with large white icons offering easy access to Movies, Music and Photos (whether on USB, network or disc), as well as the network, internet portal and setup menu. 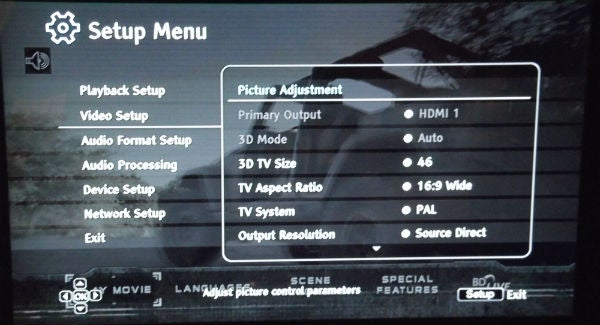 The setup menu is probably one of the best we’ve encountered – primarily because you can call it up and make changes while you’re watching a movie. It’s the same menu found on OPPO’s range of players (indeed, our nearby OPPO player kept reacting to the 651BD’s remote commands) which reveals some shared DNA – but that’s a good thing. 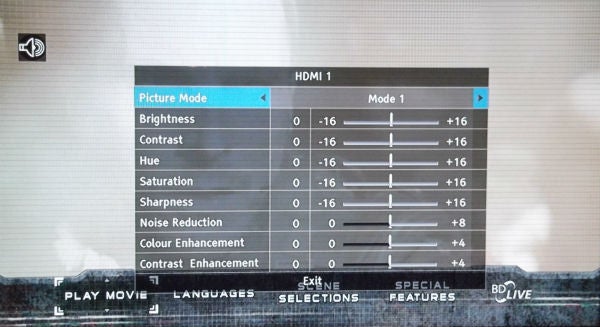 Within the setup menu, you can adjust the picture using a decent range of parameters that includes noise reduction, colour and contrast enhancement, as well as brightness, contrast, hue, saturation and so forth. It’s not as detailed as some high-end players, but useful for basic tweaking. There are also speaker settings (levels, distance settings, size) and loads more – it leaves no stone unturned. 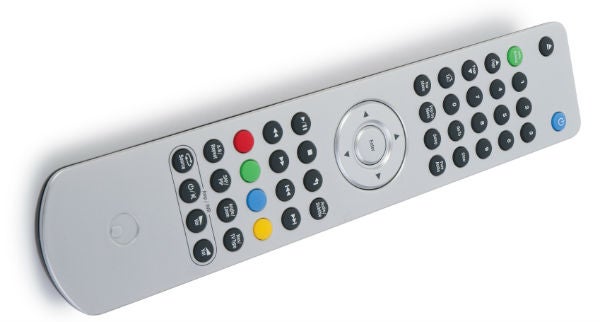 The deck comes with an excellent remote, boasting heavyweight build quality, sturdy rubber buttons and an intuitive, uncluttered layout. The labelling is a little small, but otherwise it’s a superb zapper. An ‘Info’ button brings up banners at the top and bottom of the screen, displaying information about the disc being played – including audio/video format, video bitrate and frame rate. Another button provides quick access to a list of output resolutions. It can also be used to control volume and sources on Cambridge Audio AV receivers. 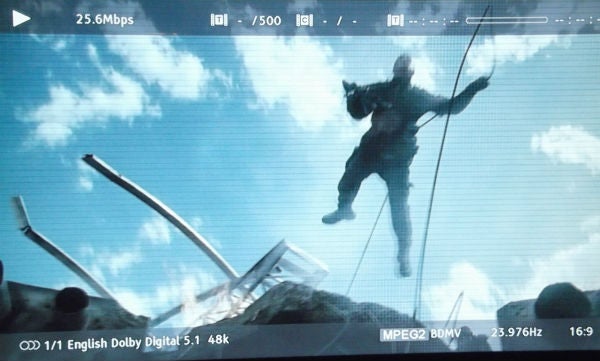 We started performance tests with a run-through of the Silicon Optix HQV Blu-ray disc. It handles every test bar one with exceptional clarity and smoothness – no jaggies on the Diagonal Filter test and no strobing on the Video Resolution Loss test. However there is some strobing in the striped boxes of the Film Resolution Loss test, which shows it’s not quite processing the picture in the right way.

Next we tried our range of video files and the 651BD is a fairly versatile player, able to decode AVI, MKV, WMV and DivX HD, but not AVCHD. As for music, it tackles WAV, MP3, WMA and AAC with no trouble.

Next we move to the all-important Blu-ray playback. Loading times are fairly fast, with Terminator Salvation clocking in at 43 seconds. The Curious Case of Benjamin Button looks absolutely beautiful, with piercingly sharp detail filling every inch of the screen, backed up by deep, nuanced colours. The movie’s painstakingly recreated period backdrops look better than ever, although the sharpness of the image exposes the falseness of Brad Pitt’s CG-aged face.

The overall picture is solid and effortlessly cinematic – nothing looks washed out or bleached, plus detail during dark scenes retains visibility, giving them the element of depth and three-dimensionality. That’s as much to do with the quality of your TV, but it’s reassuring that the 651BD is passing on the picture without a pixel out of place. 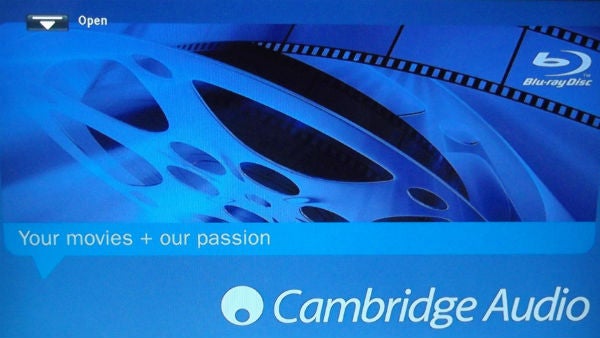 The great work continues with 3D discs. The depth and clarity of the layered images is astonishing, plus we can’t fault the levels of detail, colour accuracy and motion smoothness. The 651BD offers an entertaining, immersive 3D experience and you can’t ask for much more than that. The player also upscales DVDs with panache, side-stepping the artefacts that can blight picture quality on players that don’t have such a powerful scaler on board.

And as expected the 651BD’s audio playback is supremely good, managing to make any CD, SACD or DVD-A sparkle. Donny Hathaway’s Extension of a Man on CD soars with warmth, velvety smoothness and gorgeously crisp high-frequency detail, plus Mr Hathaway’s voice sounds rich and majestic, not thin or nasal. Lovely stuff. But upgrade to a 5.1-channel SACD disc and you’re transported into a spacious surround soundscape with even more twinkly top-end. It’s what luxury sounds like.

Verdict
We’re really impressed by the 651BD. It takes all the best bits from its bigger brother, the 751BD, and presents it in a more affordable but no less appealing package. The hardcore build quality hasn’t been compromised, while twin HDMI outputs, 3D playback, UPnP networking, YouTube/Picasa access and extensive digital file support all carry over from the 751BD’s feature list.

Picture and sound performance are sensational too – almost as good as the 751BD, whose more advanced internal electronics give it an extra smidge of stardust. But even with its lower spec, the 651BD puts many a midrange player to shame, easily justifying the asking price. If you’re serious about home cinema then you seriously need to give this player a whirl.