You know where you are pretty fast with World at War. Kicking off with a sort of pop-art summary of the Pacific portion of World War II, it soon shifts into some gratuitously nasty scenes of Japanese PoW torture followed by righteous vengeance as the good old boys of the USA bring the pain to the villainous Rising Sun chumps. FPS games aren’t known for understatement or restraint, but this is the noisiest, most over-the-top, gung-ho action game I’ve ever played. Somebody appears to have confused the volume and violence controls and turned both up to max just in case. You’ll be amazed at the use of hard rock guitar on the soundtrack, not to mention gobsmacked by the insensitive use of real archive footage and the attitude taken to casual slaughter. If they’re German or Japanese, they’ve got it coming is the prevailing mood. World at War makes Brothers in Arms: Hell’s Highway seem meek and apologetic. Hell, it makes Pearl Harbour look like Letters from Iwo Jima, or It Ain’t Half Hot Mum look like Tenko. If this is likely to bother you, don’t buy it. 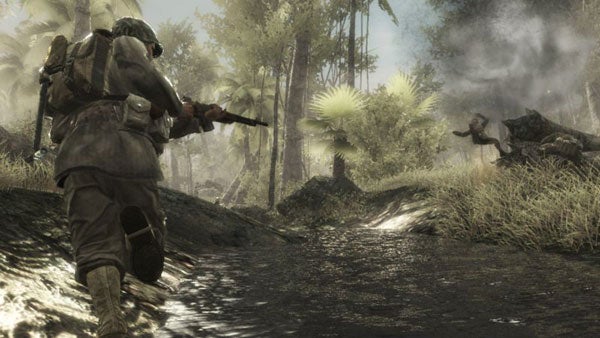 Still here? Well, I have some shocking news for you. I know prejudice is a deadly sin in my profession, but I really didn’t have high hopes at all for this one. First, it’s been developed not by Infinity Ward who did Call of Duty 2 and 4, but by Treyarch who did the messy Call of Duty 3. Secondly, it’s a World War II game, and despite the best efforts of Medal of Honor: Airborne and this year’s Brothers in Arms, I’m bored of those. Thirdly, Treyarch’s last effort was the James Bond FPS, Quantum of Solace, and while I didn’t think it was a bad game, it didn’t make me think that the developer knew how to put together great FPS levels – or make full use of the CoD4 engine, for that matter. In short, I thought World at War would suck. 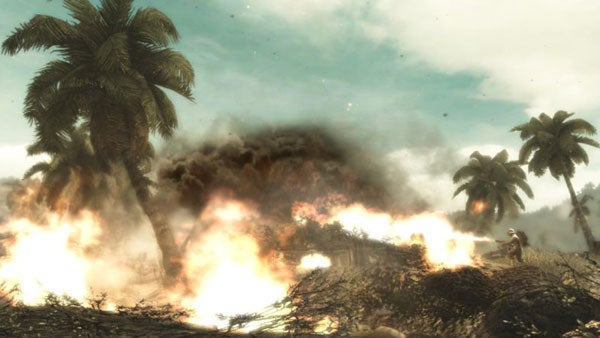 It doesn’t. Take it apart technically and there’s still an awful lot to moan about, and rest assured that I will be moaning about all of it in a minute. As an experience, though, it’s actually good, honest, slightly stupid fun. For all that Brothers in Arms: Hell’s Highway tried to create a realistic WWII experience with intelligent AI and realistic cover, it wasn’t actually all that entertaining. World at War is borderline cretinous at times, yet it’s a blast that keeps you coming back for more. I feel like I’m aiding the cause of dumbed-down gaming when I say this, but it’s true. 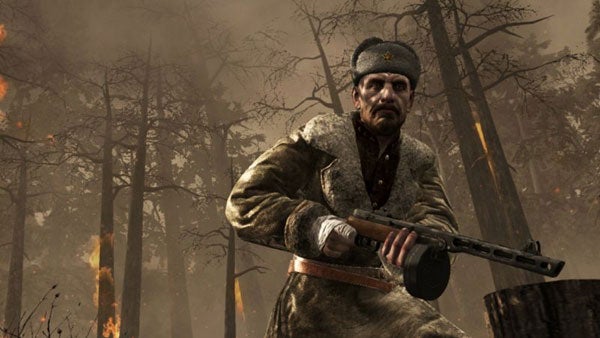 Treyarch has learned from the monotonous single-stranded European campaign of CoD3 and put two interleaving storylines in World at War. On the one hand, we have a US Marine escaping from the Japanese and joining an allied company involved in the invasion of the Pacific. On the other, we have a Russian private who survives a massacre at Stalingrad then takes his place in the onslaught on Germany two years later. Two very different war experiences, and two very different atmospheres, but both wired up for the same explosive action we saw last year in CoD4. 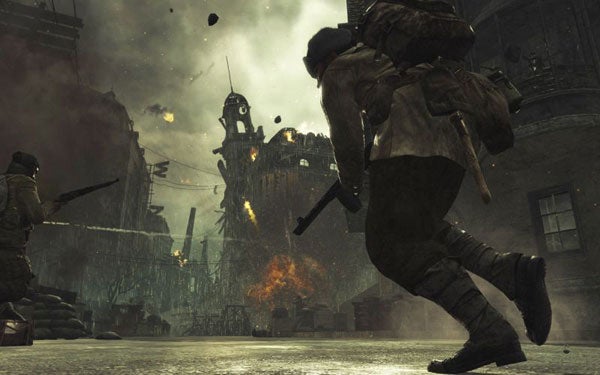 Somewhere along the line Treyarch has discovered how to do two things. First, the developer suddenly knows how to make the CoD4 engine sing. From the jungles of the Pacific to the ravaged shells of Stalingrad and Berlin, World at War is a visual smorgasbord, featuring some of the most impressive scenery, lighting and flame and particle effects I’ve seen in any military FPS to date. Some of the characters look a little rough close up, but generally speaking it’s a great looking game that actively builds on the strong foundations of its mighty predecessor. 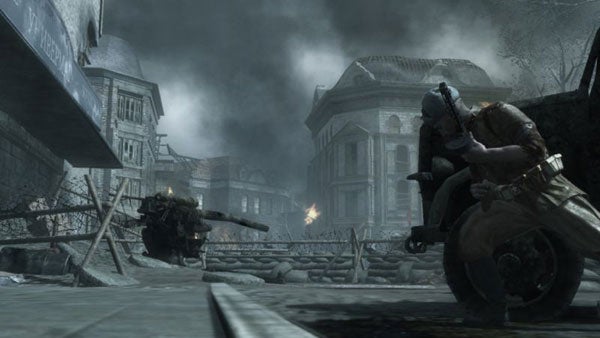 Secondly, Treyarch seems to have worked out how to chain powerful set-pieces together into tight, action-packed levels. The levels are heavily orchestrated and almost insultingly linear, but at its best World at War is an incredible ride. Two levels – a sniper mission through the crumbling buildings of Stalingrad and an assault on some Japanese emplacements – are every bit as well engineered and thrilling as anything in Call of Duty 2 or 4. You can’t help wishing that you could occasionally escape the funnel you’re being shoved through, but while it lasts World at War gives you precious little time to think. You run. You aim. You shoot. You cower. You keep pushing forwards to the next objective and the next checkpoint. This is practically the opposite of a thinking man’s action game, but it works.


OK. Let’s moan. When I say ‘funneling’ I mean it. World at War goes out of its way to throw up ridiculous barriers so that you can’t just skip through the choke points of the level. I mean, is standard jungle vegetation really that impassable? Is a small shrub? Isn’t that what machetes were designed for? 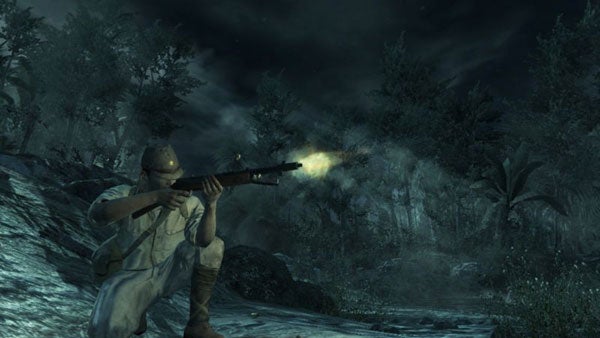 The AI, meanwhile, slips constantly between decent and deeply moronic. The Japanese have some nasty tricks up their sleeves; hiding up trees, Banzai charges and the like, but when it comes to defending a position or trying to outflank you, they don’t pass muster. Your comrades, meanwhile, put up a good fight, but it’s not unknown to see one of yours and one of theirs standing about three feet from each other, both unloading the contents of their rifles, and somehow conspiring to miss. Where did they get these guys? Dimwitsville, MA?

Finally, what’s with the grenades? Not only is it a bit too easy to miss the famous indicator in the heat of battle, but there are times when your so-called allies crowd you so much that it’s practically impossible to escape the blast. I’m not a military historian, but if I were I’d wager that the majority of deaths endured in World War II were not the result of grenades. World at War says different. The only more irritating doom? Being run over by one of my own tanks that had, somehow, crept up behind me. 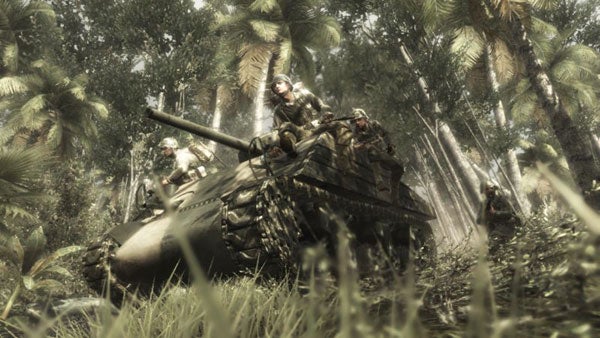 There’s no doubt that Call of Duty 4 did this sort of thing last year with more intelligence and panache, but only the most miserable curmudgeon would deny that World at War has its own dumb-assed appeal. The multiplayer options only add to it. Not only can four of you play through every campaign mission cooperatively, tutting at the ridiculous barriers and the pitiful AI lapses as you go, but the competitive online game is pretty much CoD4 in WWII with a few added knobs.


The system of ranks and unlocks carries over; the more points you get, the higher you go and the more perks, character classes and game modes you can enjoy. Sensibly, there’s also a Boot Camp team deathmatch mode, fenced off for beginners, where noobs can get their skills together before they go out and get humiliated in the other modes. Some of the additions in World at War are controversial – the attack dogs perk, where the damnable mutts seek and destroy rival players, is a serious irritation – but this is still one of the finest online games in town. It’s also never hard to find a game, and joining up is as painless and wait free as such things get. 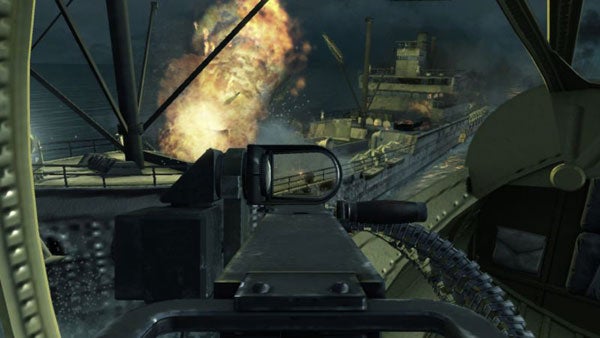 Part of me still doesn’t want to like World at War, but I have to admit that, in the end, it’s brilliant in its own ‘special’ way. Were I only going to buy one big shooter this Christmas I’d probably save my cash for something else – probably Gears 2 on the 360 or Resistance 2 on PS3 – but were I buying two this would probably get my vote. It’s not that big and it’s even less clever, but is it a laugh? Yes indeed!


It’s dumb, it’s linear and the AI can be laughable, but there’s something oddly lovable about Treyarch’s brain-dead WWII shooter. Switch off your higher functions, pump up the volume and enjoy the ride.