To the fully geekified, the idea of a device for playing video and music files on your living room TV is as familiar as a beer launching fridge. However, for a lot of people it’s as foreign as having an Aga in the bedroom. So, I’ll just briefly explain. What these devices allow you to do is sit back and relax in your favourite armchair or sofa and watch on the TV all those videos and photos stored on your home computers, while also listening to your mp3 collection on your TV or hi-fi.


The practice started with people running Linux on homemade PCs which were built into custom cases. Then Microsoft released Windows XP Media Center Edition, giving non Linux users a chance to get in on the action. Now we have dedicated devices that can do it all and, with the help of AppleTV to spread the word, these little boxes are likely to start appearing on TV cabinets all around the world.


So, today I’m looking at Buffalo’s take on the network media player, the LinkTheater Wireless A&G. At around £150, it is £50 less than the AppleTV and far cheaper than a fully fledged Media Center but you do get what you pay for with reduced functionality and connectivity. The big question is whether the right compromises have been made. 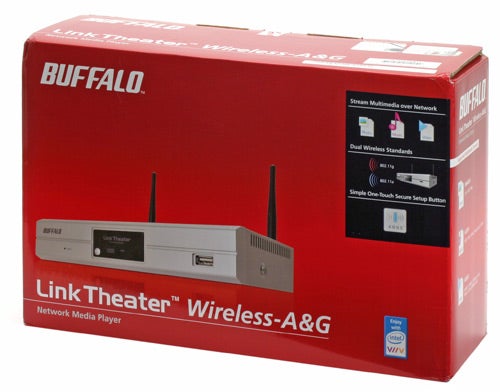 
So, on the surface the LinkTheater looks like it beats AppleTV hands down as it has far better audio and video format support and can playback content from any source – not just iTunes. However, even though it supports high definition content, it only has Scart, S-Video, and composite connections, all of which cannot transport HD signals. Now, obviously if you have an older TV this isn’t going to be a huge problem (because it won’t have any other connections) but for anyone with a modern TV, this just isn’t going to cut the mustard. Notice I didn’t say anyone with a high definition TV because even though you may not have an HDTV, component, DVI, or even VGA will provide a much better signal than these older standards, giving you sharper, brighter, more accurate video. The only digital connection on offer is an optical audio output, so at least you can enjoy good audio if you’re source material is coded correctly.


All this is made more peculiar when you consider the previous version of the LinkTheater, that Riyad looked at nearly two years ago, did have component output as well as a progressive scan DVD player. This meant that the original Link Theater could output high definition resolutions, which would be more useful now than it was then, what with the massive increase of HDTV adoption. Quite why Buffalo has decided that these features are no longer needed is utterly perplexing. Quite frankly downgrading a product from high definition to standard definition just when HDTVs are becoming the norm seems like lunacy to us!


As a budget product, it will come as no surprise that the LinkTheater is no great looker and certainly won’t be competing with AppleTV on this front. It is made from thin sheet steel with a bland plastic fascia and the whole lot is finished in generic silver paint. The clear black plastic section on the front looks like it should contain an alphanumeric display but actually just houses two LEDs that indicate power and network activity. This seems unnecessary and I would’ve preferred to see a sleek simple design that incorporated the LEDs more subtlety. In fairness the case is nice and small (280 x 47 x 124mm) so it can be tucked out of the way easily. 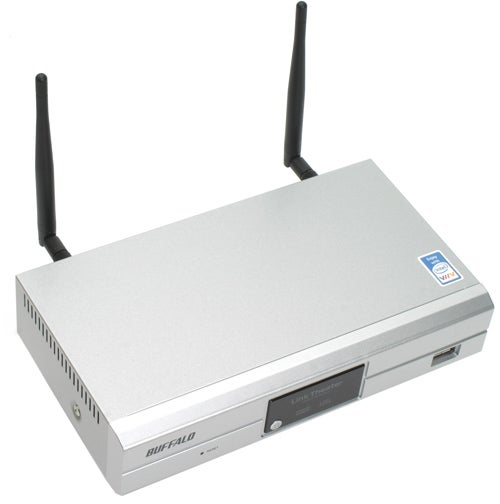 The LinkTheater can stream content from a Viiv server, your Windows Media Player library (using Windows Media Connect), or from its own MediaServer software and it will automatically search for any shared libraries on your network. To start playback or to view an image you simply navigate to the required library with the remote and pick what you want to play/view. Unfortunately menus are slow and prone to freezing and there is no finesse to any part of it – for instance, you can’t navigate your files by typing a letter on the remote so you have to scroll through the whole of you music collection to reach your Yngwie Malmsteen tracks. Of course, I wouldn’t expect anything too sophisticated from a device like this but I would hope for a certain level of usability. 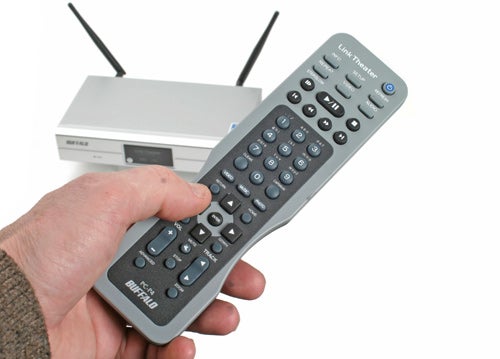 Ironically, I might have been more forgiving of the LinkTheater if the remote was as simple as the likes of the Apple Remote. OK, inputting network passwords and IP addresses would be more of a hassle but I’m sure an onscreen keyboard could do the job. As it stands, the remote has 44 buttons (or 46 if you count the volume/track rockers as two buttons) at least fifteen of which could be removed without affecting functionality and that’s not counting replacing the mobile phone style number/letter keys with an onscreen keyboard. It is also necessary for some buttons to be duplicated, apparently – who doesn’t need two stop buttons? And, to round it all off, the buttons are the squishy rubber sort that are never pleasant to use. Generally there doesn’t seem to have been any improvement over the remote for the last LinkTheater that Riyad looked at.


Moving onto more positive points, I was able to get the LinkTheater to play most of the content I threw at it. Playback was generally smooth and, given the limitations of the connection options, of reasonable quality. However, even though the appropriate formats were supported the LinkTheater couldn’t keep up with the high bit rates of HD content and watching any became a complete stutterfest. This was definitely down to the video processing engine rather than a network bandwidth problem because even playing back video from a USB stick gave the same result.

The supplied MediaServer software is very easy to use and enables you to search your computer for media or specify folders for the software to monitor and you can also specify what devices can access the server. Overall though, I’d rather use Windows Media Player 11 to control my library and use Windows Media Connect to connect to the LinkTheater.


If the Buffalo LinkTheater Wireless-A&G was £50 I would forgive all its foibles and recommend it as a great purchase for anyone with an older TV that just wants a simple way to playback their media. However, it in fact costs around three times that amount making it difficult for me to wholeheartedly recommend it to anyone. For £50 more you can get AppleTV, while if you’re really serious, for £100 more you can get the likes of the Linksys KiSS 1600 which has a DVD drive, HDMI connectivity, and can playback HD and Internet radio – either of which look like better options.