It follows that the more popular something becomes the more it will be exploited. The Internet is a fine example of this, because the more ubiquitous it becomes the more we need advanced security measures to protect ourselves from viruses, hacks and even Adware. Ten years ago you were in the minority if you had antivirus software, now firewalls are a standard part of an operating system and it’s no coincidence that the latest service pack for Windows XP largely contained security enhancements. Look to beef up your protection beyond this however and it can all get a bit complicated. So for those looking to skip ahead, Buffalo has come up with an automated extra security layer, executed at the touch of a button.


Quite frankly, the AirStation One-Touch Secure System (AOSS) is by far and away the single biggest upgrade in Buffalo’s latest router bundle (a WBR2-G54 router and a WLI-CB-G54A wireless CardBus laptop card). AOSS is a security system designed to protect wireless networks. It works by automatically detecting and configuring all the security settings for the products it connects with. But before I get fully stuck into AOSS though, let’s look at what else this router has on offer.


As with all modern routers, the WBR2-G54 is based on the 802.11g standard allowing a theoretical maximum wireless transfer rate of 54Mbit/sec. At the back of the WBR2-G54 are four ports so you can add in up to four wired computers, and the WAN port which is where you will connect the router to your DSL modem since it does not have a built in modem of its own. Above these ports is the red AOSS activation button and an external aerial socket should you wish to boost the signal with the optional antenna. Below the ports you’ll find a factory reset button and the 3V/1.1A power socket. Since security is so fundamental to the Buffalo bundle, both the WBR2-G54 and WLI-CB-G54A support Wi-Fi Protected Access (WPA) which is currently the highest wireless security standard, Temporal Key Integrity Protocol (TKIP), and the older 64 and 128bit WEP standards. Printers, scanners, hubs and switches can be connected to the WBR2-G54 as well as gaming consoles and entertainment devices with an Ethernet port. Finally there is software support for the Wireless Distribution System (WDS) so if you are running two or more networks the WBR2-G54 can bridge them.


Being superficial for a minute, I have to admit the WBR2-G54 is not the most inspiring of devices to look at. Perhaps there is some 70s retro cool in its styling but for me it looks like one of those old standalone radiators. I’m also convinced it would look better laid out horizontally rather than in its vertical arrangement, but sadly you can’t swap the feet around.


Anyway, returning to things that really matter, I have to admit I was very impressed with the WBR2-G54 and WLI-CB-G54A laptop card. Setup was simple, thanks to the well written and full-colour, illustrated Quick Start guide. Like all routers the WBR2-G54 requires no drivers so it’s simply a matter of connecting it up to your modem and hard wiring in as many computers as you require. The WLI-CB-G54A does require drivers but the installation procedure is brief and painless and the two devices then auto detect one another. At this point it is time to enable AOSS. Once you hold in the red AOSS button on the back of the router for three seconds you have two minutes to tell the laptop card to respond through the clearly marked AOSS button in its software. The two detect each other again and the process is complete.


The beauty of the AOSS system is that it sets up each wireless device automatically to their maximum security levels. Should that be an AOSS compatible Buffalo card (Buffalo is updating some of its older products with new drivers to support the feature) then WPA and TKIP will be in operation. Should you have a wireless laptop or PCI card in your network that does not have support for the WPA standard it will then communicate with that device at a level it will support such as 128bit WEP while continuing to support WPA everywhere else. If there is a drawback to this system it is that any non-AOSS devices on the network must be introduced manually by extracting the required details from the AOSS management page. Currently only Buffalo products are AOSS compatible, though Buffalo is aiming to licence the technology to consumer electronics companies for use in TVs, DVD players, printers and consoles.

Now, should you have a large physical distance to your network it is worth remembering that the 54g standard does not carry the same signal strength as 11b, but with the WBR2-G54 it proved to be very close. Signal testing is an imprecise art given that what the signal must pass through is of far greater importance than the distance involved, but it certainly was comparable with my 11b router at home under the same conditions. The signal strength was on average 15 per cent weaker one floor away than my 11b router – this is excellent considering that my 11b router has two external aerials and the WBR2-G54 was not supplied with its optional external aerial. 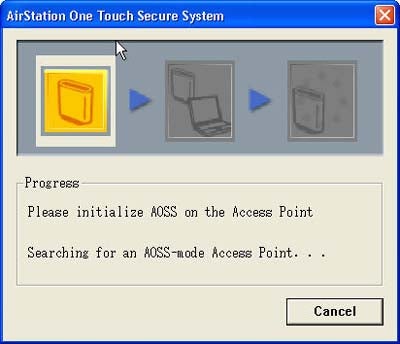 Transfer rate performance was also excellent. Moving a 58.4MB MP3 album between the WBR2-G54 and the WLI-CB-G54A took just 28 seconds at a distance of two metres with no encryption, an average speed of over 20Mbits/sec. This is among the fastest transfers I have seen and beats every 802.11g standard DSL router in our recent roundup. In a more real world situation I applied first the standard 128bit WEP encryption then the AOSS standard which invoked WPA. Naturally there was some slowdown but the times of 30 and 31 seconds respectively are highly encouraging. More importantly, to make the tests even more realistic I separated the routers by a floor and the times of 32, 35 and 38 seconds for no encryption, 128bit WEP and AOSS respectively show that you won’t pay a heavy speed penalty for top level security. Moving large files like AVIs was even more encouraging, with a 350MB file taking 151 seconds from two metres away with no encryption, equating to over 23Mbits/sec. Even with AOSS security enabled, this time only dropped to 166 seconds. 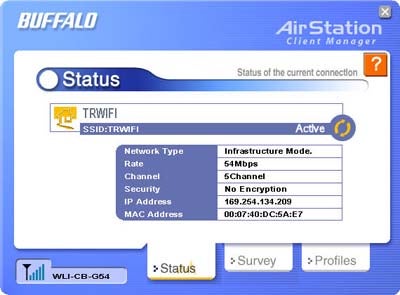 So is there a hefty penalty to pay for all these features. The answer is yes and no. Yes, because for £99.29 you can just about buy a wireless router with built in DSL modem and a separate laptop card. No, because less than £100 is not a lot of money to setup a wireless network with top level security, and in my opinion the price is well worth paying for peace of mind.


An excellent bundle from Buffalo which incorporates the latest security technology into a format anyone can use. Security never used to be simple – it is now.