What is the BT Dual-Band Wi-Fi Extender 600?

BT has a pretty good recent track record with its networking accessories and it has largely scored another hit with the Dual-Band Wi-Fi Extender 600, though it does have one key annoyance.

Starting with the good stuff, the Extender 600 has one unique and very useful feature which is a set of LEDs that indicate whether the unit is an optimal distance from your router. The idea being, if it’s too close then you’re not going to extend the range much and if it’s too far away you’ll not get a good enough signal.

Elsewhere this is a fairly typical dual-band extender with a single Ethernet port on the top for connecting wired devices and both WPS and manual setup. 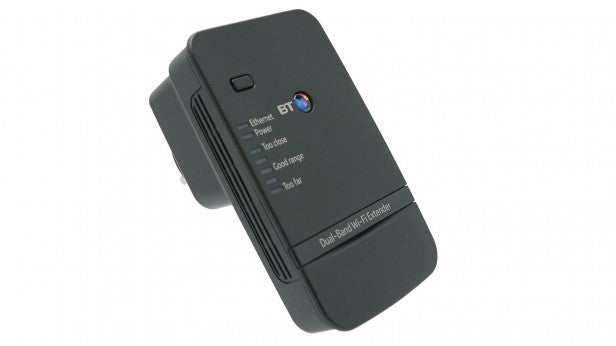 It’s quite a large unit with an eye catching matt black livery. We quite like the look, though of course it doesn’t exactly merge into the white plastic background of most plug sockets.

We also encountered one major irritation with this unit, which is that the setup process is totally automated and uses the same SSIDs as your existing network. As such it’s difficult to tell whether you’re connecting to it or the existing network.

You can change the extender’s SSIDs once it has connected to a network
but then each time you connect it to another network it then resets
itself. It’s the sort of thing that probably won’t be an issue for most
people – once it’s setup it does just work – but to have it be so
difficult to manually configure the unit is still disappointing.

These aren’t record breaking figures but for a compact unit rated to AC600 they’re about as good as you can get.

The Extender 600 offers a good selection of features and performance for its £39.99 price, though we’d be inclined to spend a little more on the Extender 1200 for even better performance.

Next, check out our pick of the Best Wi-Fi Extenders