This is a very different printer, in almost every way, from those we normally review. It’s a portable device, designed for people on the road who need to get quick paper records of transactions from their notebooks or PDAs. It uses a full-width thermal print head to print on coated sheets of thin, A7 paper, and has both a rechargeable Lithium-ion battery and integral Bluetooth support.


The MPrint MW-140BT is about the size and shape of a paperback poetry book, though more weighty than most, and is unusual in other ways, too. In its top left-hand corner are multi-coloured indicator lights for battery state, power and Bluetooth activity. 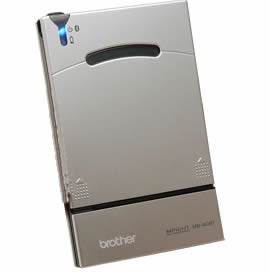 About three quarters of the way down its brushed-aluminium front face is a slit running the full width of the printer and this is where the slivers of paper eject as you print. The pack of 50 sheets of thermal paper supplied with the MPrint MW-140BT fits under a hinged top cover. You simply fold the top of the pack back and clip the whole thing into the printer, without having to remove the paper.


Down the left-hand side of the machine are sockets for a USB 2.0 connection and a power supply, a slide switch to activate the Bluetooth transceiver and a pushbutton power switch. The Lithium-ion battery recharges automatically whenever the power supply is connected, and will run the printer for up to 100 A7 pages on a single charge.

As well as the A7 paper, Brother sells labels in three sizes: one, two and four to the A7 sheet. This gives the device a useful extra function.


The printer is designed to work with Windows-based computers, Pocket PCs and Palm PDAs. It has software for each of these three, though to work with the last two, the devices must have Bluetooth capability.


USB 2.0 installation is pretty straightforward, in typical ‘install the software then plug in the printer’ style, though Bluetooth setup is more complex. One of the main things to check is that both your PC or PDA and the printer think they’re working through the same virtual Bluetooth serial port. We had the printer thinking it was on COM7, while our test PC was oblivious, as it was working feverishly on COM8.


Once it’s all set up right, though, printing is pretty straightforward, using either connection method. Brother supplies an idiosyncratic Windows applet called SnapSpot. This consists of a small page editor – where you can add simple graphics and text, background textures and imported photo elements – and the SnapSpot Snapper.

The Snapper can grab a portion of the screen, highlighted under its magnifying lens, so you can print it out. Quite why you would want to print a small section of your screen out in monochrome on a thermal printer is unclear, but the facility’s there if you need it.


Printing with the MPrint MW-140BT is not quick, particularly if you’re printing graphics rather than text. Although the claimed page speed of 15 seconds per page sounds good, and we certainly managed to get a page from the printer in 18 seconds, you have to remember this is only 1/16 of on A4 page. 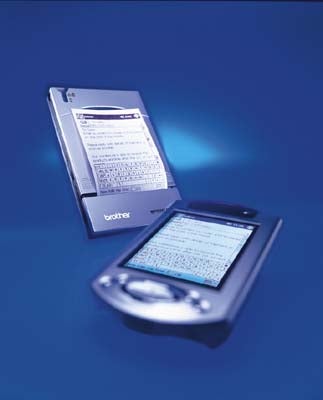 The printer is quite clever at reducing a standard A4 page to its A7 paper size, though if this is a text page, it’s not that easy to read. The printer has a fixed resolution of 300dpi and 12 point text reduces to something below five point, which is hard to represent with this many dots to the inch. It’s much better at reproducing a typical PDA screen, where it’s almost printing size for size.


Being a thermal printer, the Brother device is quiet, below the 40dBA cut-off of our sound meter, and the sound is a non-intrusive clicking which is unlikely to disturb people, even in sound-sensitive surroundings, such as libraries.


The only consumable in the MPrint MW-140BT is paper and we found a pack of 50 sheets for £2.24, giving a cost per page of 4.49p. This is OK, but again you have to remember these sheets are very small and you’re actually paying the equivalent of about 20p per A4 page. You always have to pay more for unusual paper sizes, though.


The paper is thin, probably around 60gsm, though Brother doesn’t state its weight, but is quite dense and is coated on just one side. Unfortunately we didn’t have opportunity to examine the label stock.


The MPrint is well engineered and working near faultlessly, you still wonder how much of a niche there is for this printer. Printing in monochrome on coated paper is more appropriate for a checkout till than a computer printer, even when you’re on the move. Add in a street price of over £200 and you’ve got to have a pretty special need for the MPrint MW-140BT.


Ultimately, this is a device that you either need or you don’t. If you’re not reading this review and thinking how much easier it will make your working day, then you probably don’t neet it. If you can see an instant use for the MPrint MW-140BT, then even the steep asking price of £231 probably won’t put you off.