If you’re building the same basic print mechanism into a £200 all-in-one as into a £70 one, you’ve got to put something into the mix to differentiate between them. Brother has done just that by adding an Automatic Document Feeder (ADF), a touchscreen, WiFi and a DECT phone with answering machine into its MFC-990CW. But are all the bells and whistles worth the extra money?


This is a top-of-the-range device, so it has to be in piano black and this Brother machine doesn’t disappoint with a shiny black control panel and the main part of the ADF suitably reflective, too. 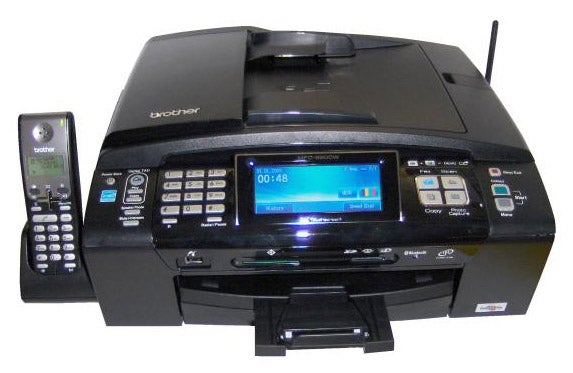 It follows Brother’s usual squat lines for all-in-ones, with a slightly sloped top panel and an ADF with a very low profile. Unusually, it feeds paper from its top surface to two, blade-style supports sitting above, which means the pages being scanned move upwards rather than down.


The control panel itself is surprisingly busy, considering all the menu navigation is done on the widescreen touch-panel Brother has built in. The touch-panel is not as responsive to use as ones we’ve seen recently on Epson and Kodak machines and has a slightly soft feel to its surface, but it serves its purpose and makes controlling the machine simpler. 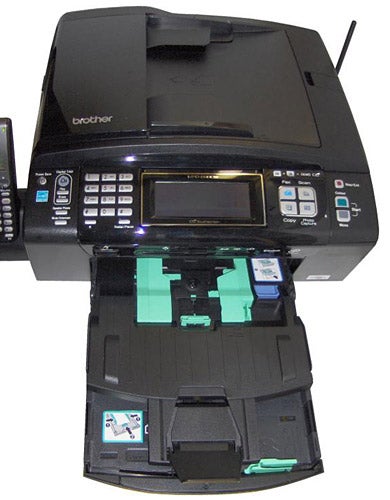 To the left of the touch-panel is a numberpad for phone and fax dialling. Outside of this is a digital telephone answering machine, which works in conjunction with the DECT phone that sits in a cradle on the left of the machine. The phone is a reasonable, wireless device, with a three-line LCD display and an intercom function for talking to other DECT devices.


To the right of the touchscreen are four function buttons for scan, copy, fax and photo capture and at the extreme right are buttons to start and stop mono and colour copies. Set into the front face of the machine are memory card slots for all the common types and a PictBridge socket, which doubles as a walk-up-and-print USB port for memory drives.


The 100-sheet paper tray has a photo tray set into its top, but this has to be pushed forward manually into the machine when you want to print photos. In a device costing £200, you might expect it to be powered and automatically pulled into the printer on demand.

Setup is pretty easy, as the four ink cartridges slide into a bay to the right of the paper tray and there’s no need to delve inside the machine. Because the MFC-990CW comes as standard with wireless networking, as well as cabled Ethernet and USB connections, you don’t even have to raise the main scanner section to feed the cables into the bowels of the machine, as is the case with its non-WiFi-enabled siblings.


Brother’s bundled software suite handles all main functions, such as scanning and OCR, uploading photos and of course printing.

Brother claims even more ludicrous speeds for this machine than for its other all-in-ones we’ve tested recently. According to its spec sheet, it can print up to 33 mono pages per minute and 27 colour ones. In reality, if you’re printing in normal mode, you’ll see around 3.8ppm and 2.3ppm, respectively.


For comparison, Brother’s £50 MFC-250C managed 3ppm for both mono and colour prints and the £150 HP Photosmart C6380 came in with 5.5ppm and 3.7ppm, so this isn’t the fastest all-in-one on the block and speed is not one of the reasons you pay the extra money. 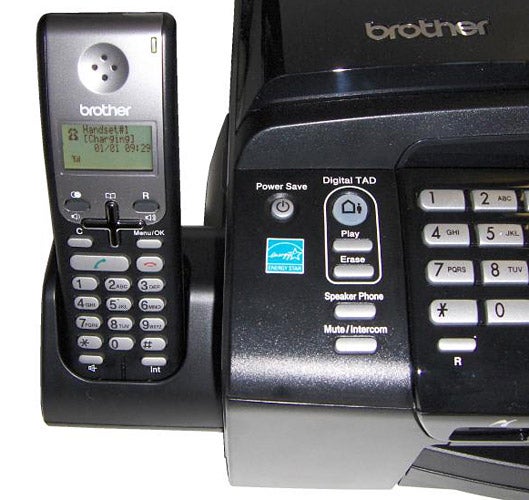 A colour photocopy took 42 seconds from the flatbed and a five-page black text document copied in 1mins 52 secs, both of which are reasonable times for a SOHO device. Photo print speeds are also respectable, with a fastest print time for a 15 x 10cm print of 1mins 40secs, from an SD card.


Scanning into a PC is quick and easy, but scan quality is only reasonable. Scanned images can look pale in comparison with originals and this also shows in our photocopy tests, where colour copies came through with a faded look. 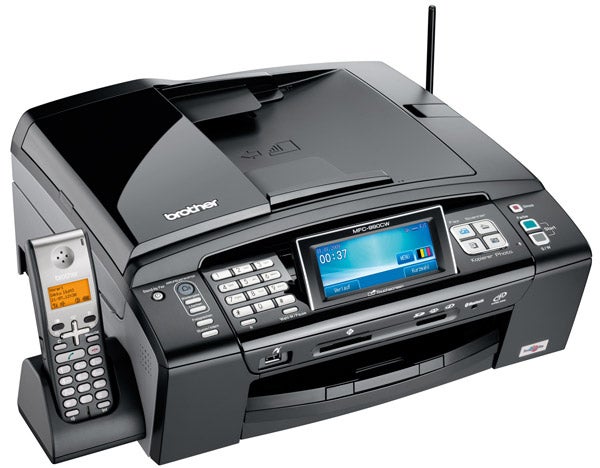 Colour prints are generally better, though there’s still some mottling in solid areas of colour, particularly blue. Text registration over colour is good, with no signs of haloing, and black text itself is passable although it doesn’t have the crispness seen in samples from some of the machine’s main competitors.


The ink cartridges for the MFC-990CW are available in two capacities and we were able to find them more cheaply from ValueShop than when we tested the MFC-5890CN, which uses the same consumables. This resulted in slightly cheaper page costs of 2.5p for ISO black pages and 5.8p for colour. Both these costs are lower than average and the high-yield cartridges have good yields of 900 and 750 pages, so you won’t be replacing cartridges every other week.


If you’re running a small business and really want a machine that can replace a lot of desktop equipment, the MFC-990CW fits the bill. While its print quality and speed are no better than other Brother all-in-ones, having a phone, answering machine, fax, scanner, copier and of course a photo/doc printer all in one compact device could be very appealing. Just be aware that it’s a bit of a jack of all trades…