Brother claims to be the second most popular supplier of laser-based printers and multifunction devices in the UK and we’ve little reason to doubt this. It aims itself more at business than the home user, though the new MFC-7840W mono laser multifunction will probably be more at home in a SOHO environment than as a workgroup printer, even in a small workgroup. 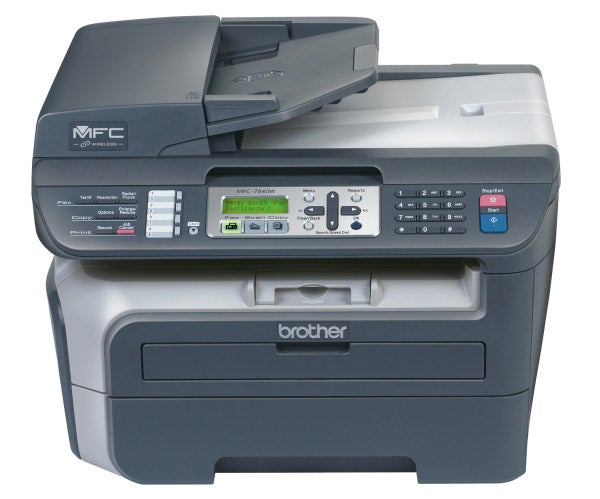 Based on Brother’s new range of laser engines the MFC-7840W is just about as compact as you can get for a multifunction machine with a built-in A4 Auto Document Feeder (ADF). With a 250-sheet paper tray and a single-sheet, multi-purpose slot just above, the machine also boasts a straight-through paper path, if you open a cover at the back.


Otherwise, paper feeds through onto the top of the laser engine, protruding only a small amount at the front directly underneath the machine’s control panel. There’s no flimsy output tray sticking out to get caught as you walk past.


The control panel comes with a two-line, 16-character, backlit LCD display; three illuminated mode keys for fax, scan and copy; quick-dial buttons; a number pad for fax dialling; and an eight-button navigation pad that isn’t quite as intuitive as it should be. Finally, a set of option buttons at the extreme left-hand end provides for selections like fax resolution, copy enlargement and reduction, and secure print. 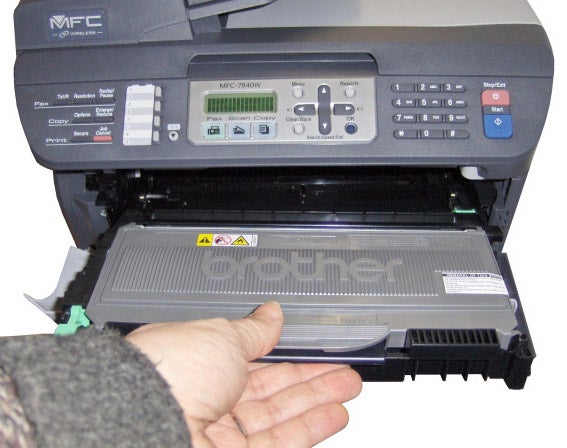 The scanner section at the top of the machine lifts up, but not for access to the drum and toner cartridge. The only reason you might want to raise it is if there’s a paper jam. In fact, this multifunction printer’s consumables slide in as a single cartridge from the front of the machine, once you’ve hinged down the front cover. The cartridge doesn’t locate or slide in particularly easily, though.


USB installation is straightforward enough, but wireless connection is more complicated and, we guess, more complicated than Brother thinks it is. The wireless installation Wizard offers automated and manual set-ups and if your router supports Secure Easy Setup, Wi-Fi Protected Setup or AISS, all should be well.


In other cases, you have to either be able to connect this MFP directly to the wireless router via a network cable or have a wireless-enabled PC. If you want to set up via a router, but the router is positioned inconveniently for a physical link, the Wizard doesn’t help much. Other wireless printer makers enable a wireless set up using a temporary USB connection to any PC on the network, which seems the simplest approach to us.

Once we got it running, all was sweetness and light and the good level of support software, particular the full copy of Nuance’s PaperPort (even if it is version 11), handles the machine’s functions well.


Brother’s spec sheet says 22ppm for print speed, so we were expecting around 10ppm, allowing for normal, rather than draft print modes and taking into account rasterising and warm-up times. Imagine our surprise, then, when our five-page text document printed in 22 seconds. That’s 13.6ppm.

There was more surprise, when the text and graphics document took exactly the same time and a 15 by 10cm photo print took just 15 seconds, so 4ppm. These are all impressive speeds for an MFP in this price range. Copying is equally speedy, with single-page copies from both the ADF and the scanner glass taking just 11 seconds.


Copy quality isn’t quite so good, with some odd moiré patterns appearing on tinted areas of the copies. Text and solid colours at the device’s default 600dpi are fine, exceeded only by original prints, which are crisp with almost-die-cut detail. Even photo reproduction, normally not a mono laser engine’s forte, is cleaner than most. The enhanced, pseudo-1200dpi high resolution print mode still looks a bit dotty, though, compared with some others. 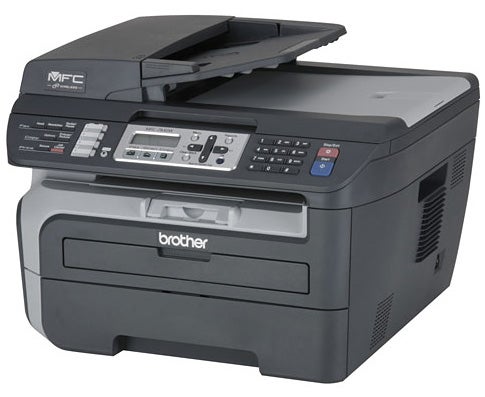 Even though the printer is mono-only, scanning is in full colour and is detailed. It’s a bit restricted with a top optical resolution of 600dpi especially if you need high-res scans of photos, but for Optical Character Recognition (OCR) that’s plenty.


The MFC-7840W uses a single, slide-in cartridge, but this is made up of two separate components. There’s a photoconductor drum, good for 12,000 ISO pages and a clip-in toner cartridge, available in capacities of 1,500 and 2,600 pages. Using the high-capacity toner cartridge, which is more economic, gives a cost per page of 2.84p. This is nearly the same as HP’s LaserJet M1120 MFP and matches Samsung’s SCX-4500.


Brother’s MFC-7840W is a compact, quick and inexpensive to run multifunction mono laser printer, with full wireless compatibility and fax functionality. The price quoted is from Brother itself, as at the point of review this machine has only just launched. Once it’s been around for a month or so, you can expect to see it available at £50 to £100 less than this, judging by previous printer launches (and looking at its sub-$300 US price). Our recommendation is based on a lower price of this order.